There are few figures that seem as culturally and politically insignificant as the jester. Yet royal courts and kings have had influential fools and jesters for centuries. Sometimes, the wisdom that their position allows them to utter takes on greater meaning than all the advice of all the other counselors in court. 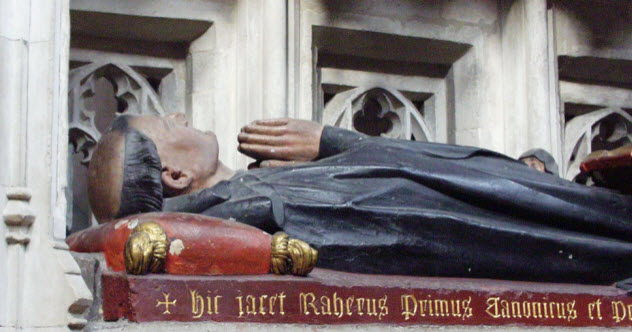 According to 12th-century writings, Rayer was an ambitious young man who made himself useful to all the right people, especially noblemen. Even though he was lowborn, he made the most of what he did have available: his wit.

Rayer was notorious for making fun of anyone who wasn’t present for a conversation—to the delight of everyone who was there. A source for scandalous gossip and whispers, he apparently performed clerical duties alongside being the jester of Henry I. He was particularly popular with the servants and children when he adopted the manner of an “ydiotte.”

After going on a pilgrimage to Rome, Rayer returned to London to found one of the oldest medical institutions in the city: St. Bartholomew’s Hospital. He did so to create a safe haven for the “fonnysch and febill” who were not as fortunate as he was. 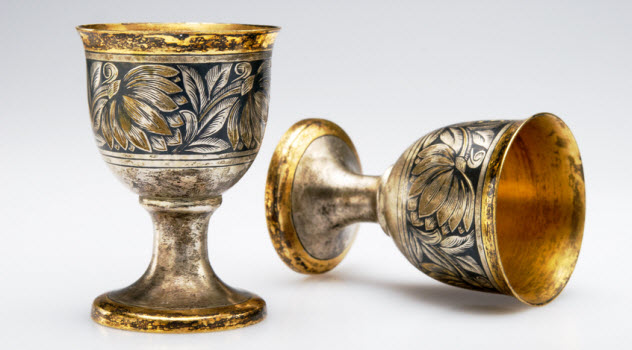 Shen Jiangao (aka Gradually Stretching Taller) was the 10th-century jester for the Southern Tang emperor Liezu. When the kingdom was struck by drought, the jester commented that even the rain was afraid of being taxed and would not enter the land. The emperor laughed and reduced taxes. Supposedly, it rained that very night.

The jester was also credited with saving the emperor’s life. Knowing he could not win a war with Zhou Ben, Liezu invited his enemy to a banquet. But Ben slipped poison into a wine goblet before offering it to Liezu with a wish for long life and a request to drink as a sign of unity.

Shen Jiango grabbed the poisoned goblet, drank it himself, and fled the room. He allowed his emperor a way out of the deadly situation at the cost of his own life. After fleeing the banquet and being given antidotes that did not work, his brain burst. 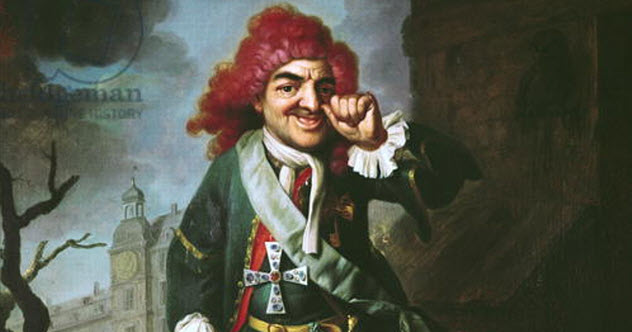 Perkeo is a legendary figure in Heidelberg, Germany. Brought to the royal court as a jester in the early 18th century, he was a massive success. Originally from Italy, the dwarf was assigned another position: keeper of the Tun. Perkeo’s wooden form still stands watch over the Heidelberg Tun landmark at Heidelberg Castle.

The Heidelberg Tun holds the record for being the largest wine barrel in the world. Holding more than 220,000 liters (58,000 gallons), the Tun was an appropriate charge for the jester. Although it’s sadly empty, it was originally meant for collecting wine given as tax payments.

Perkeo was supposedly capable of drinking obscene amounts of wine, which was all he ever drank. He was nearly 80 when he fell sick and was persuaded to drink a glass of water. He died that night. 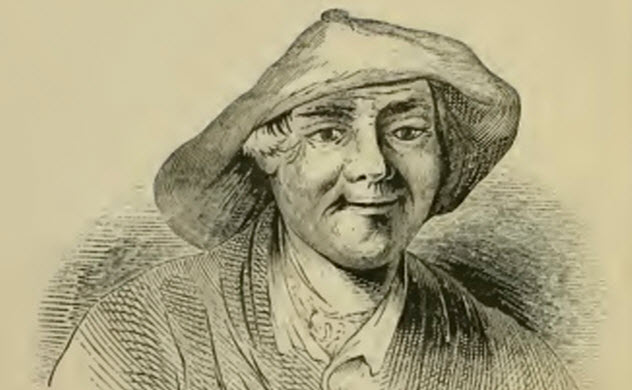 Jamie Fleeman was the jester for Countess Mary Hay, an 18th-century Scottish noblewoman who was a legend in her own time. She married after dueling her intended husband (while dressed as a man) and eventually became the 14th Lord High Chancellor of Scotland. In the 1740s, she took the rather unpopular action of conscripting countless men to fight for Prince Charles. One of the few people she could trust was her jester.

A hired fool of almost inhuman strength, Fleeman was often tasked by the countess to deliver messages and report on the political intrigues that surrounded her. Also hired by the nearby Laird Udny, Fleeman may have used his fool’s role as a cover, hiding his true motives while the countess relied on him to keep her afloat during a precarious time. 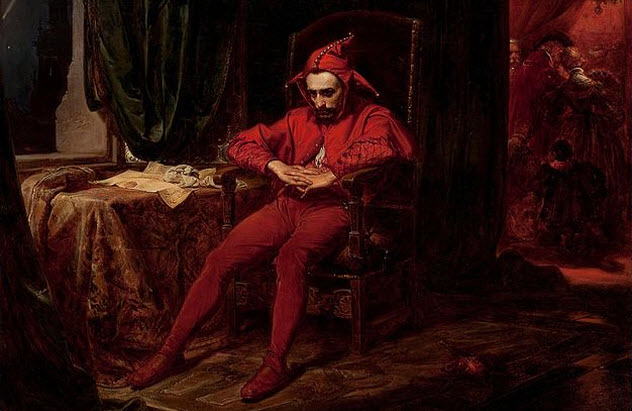 Stanczyk (1480–1560) was the jester to three Polish kings. He was lauded for his jokes at the expense of royal courtiers and eventually became a national symbol for skepticism and wisdom.

In Renaissance art and literature, the jester is portrayed as a wise man struggling to make his king recognize that wisdom. He sees Polish nobles as far removed from what they once were and warriors as more concerned with dress than defense. He also sees his countrymen forgetting their past conflicts and their heritage.

The fictional Stanczyk had been used in countless works to criticize the Polish nobility. Featured in one of Jan Matejko’s most famous paintings, Stanczyk is shown mourning the loss of Smolensk while his royal masters dance the night away. 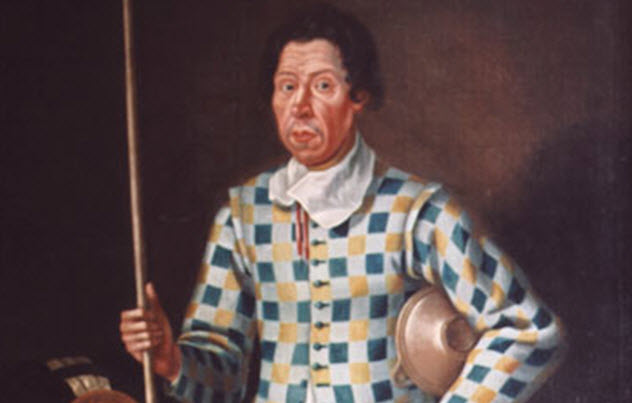 England’s Muncaster Castle still holds a competition to crown their annual jester, but it was not always such a jolly time. The castle was once home to Tom Skelton, who inspired Shakespeare’s fool in King Lear.

In 1825, former newspaper editor John Briggs published his research on Skelton and told a grisly tale. In addition to being a fool, he was also a murderer for hire.

When a local knight found the daughter of the castle lord rebuking his advances for the favor of a carpenter’s son, he hired Skelton to take care of the problem. Skelton, who thought the carpenter’s son was stealing from him, was more than willing.

Although Skelton was definitely a real person, it is debated how true the story is. 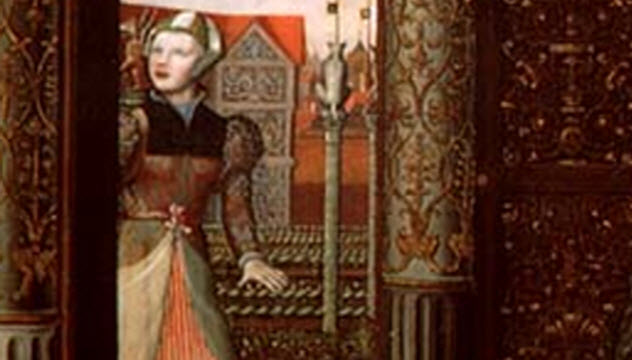 Once the fool of Anne Boleyn, Princess Mary, and Katherine Parr, Jane the Foole is featured in the only surviving family portrait of Henry VIII’s court. Although the 1545 painting featured Jane as part of Henry’s “ideal family,” we know little about her.

Court records show that Jane received a huge amount of support from the court, including the provision of Valentine’s Day gifts for her suitors as well as food and a caretaker for her horse. Every six months, she was given 12 pairs of shoes. Her head was shaved every few weeks, presumably to set her apart from other court ladies.

Young Mary’s notoriously innocent nature meant that Jane probably served as a practical joker, telling riddles and reciting ballads. Based on letters from Catherine of Aragon, Jane was also there to help improve the girl’s health by using laughter as medicine. 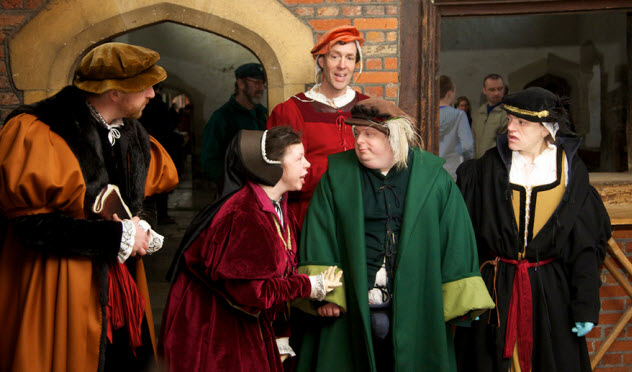 Cardinal Wolsey had long occupied a precarious position in the court of Henry VIII. When he was accused of treason, he used his favorite fool to try to help buy his way back into the king’s good graces. Wolsey gave the king Hampton Court Palace and a “natural fool” named Sexton.

Although records are not incredibly specific about Sexton’s life story, we do know that he had absolutely no desire to move into the English court. It took six men to move the tall, strong fool from his home into the court.

Sexton may have been the same fool first given the name “Patch.” One story tells of the king giving the fool a warrant to collect a tax of one egg from every man unhappy with his wife. The fool immediately told the king that it was he who owed the first egg. 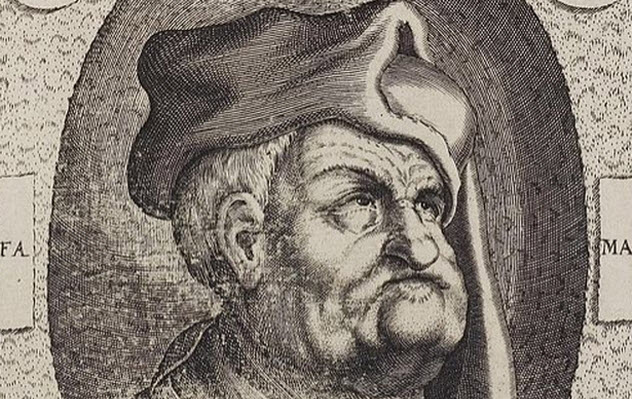 Starting in the 1480s, Claus Narr had a 50-year career as a fool throughout Saxony. The subject of a massive number of literary works, he was a poster child for the idea of the fool being wise and pure.

Even Martin Luther told stories about him. One German author amassed a package of 627 tales, which he marketed as moral tales and Christian lessons. Every episode retold about Claus Narr was turned into a lesson of some sort, even an instance when he unsuccessfully tried to shoo away a painted bird. That became a cautionary tale for guests, indicating that they should never overstay their welcome.

Claus Narr was even credited with a knack for predicting the future. When asked whether Martin Luther’s Reformation would be successful, he said that the revolution would continue but his clothes would get worse. His reputation sparked the idea that fools were to be regarded as God’s creatures. 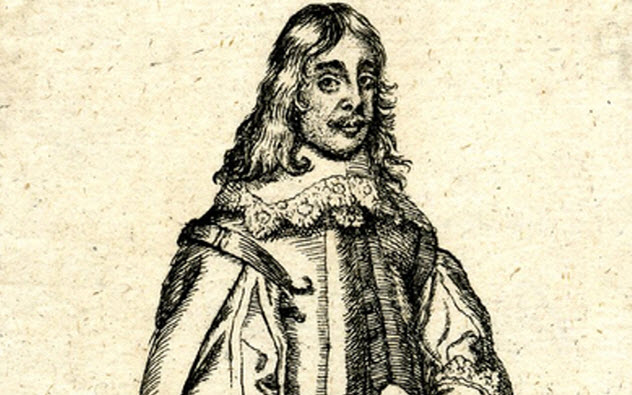 By most accounts, Archy Armstrong had every bit as much of the pompous attitude as any of the courtiers he ridiculed. He also used his position as the favorite jester to accept bribes from those who wanted access to the king.

Armstrong’s history seems to be filled with incidents—like his sacrilegious comments to the Archbishop of Canterbury—where he used his position to get away with saying anything to anybody. It finally caught up to him when he referenced a Scottish rebellion. Oddly, he was ultimately punished by having his coat pulled over his head and being banished from office.

He had already amassed enough wealth that he lived quite comfortably until his death on April 1, 1646. Even so, Armstrong spent his last years writing a massive condemnation of the archbishop who, in the end, did fall as well.