Fire is a terrifying force, even on the smallest of scales. When it gets out of control, it can ravage thousands and thousands of acres. Stories of out-of-control fires, and the courage and sacrifice they’ve inspired, provide a humbling glimpse into the power of nature.

10 The Great Fire Of Meireki 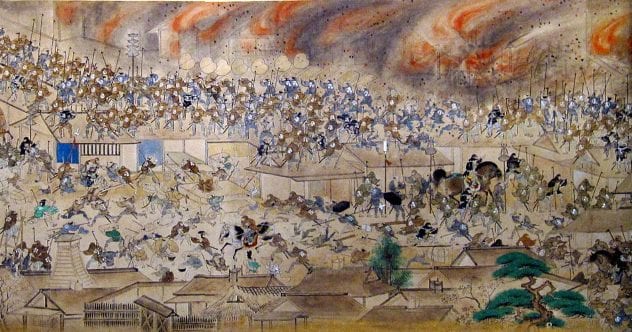 According to the story, in January 1657, Edo (modern-day Tokyo) was plagued with tuberculosis. A particular kimono seemed to be spreading the disease, as three successive owners died from TB after wearing it. On January 18, a Buddhist monk set the garment on fire. A gust of wind snatched it away, and it set the temple roof ablaze. The fire was said to have spread from there, giving the fire its other name—the “long-sleeved kimono fire.”

When the fire was finally extinguished two days later, around 60 percent of the city was gone, and the death toll was estimated to be as high as 100,000, around a third of the city’s population at the time. Edo was transformed radically after the fire, doubling in size and laid out under new guidelines to prevent future fires. 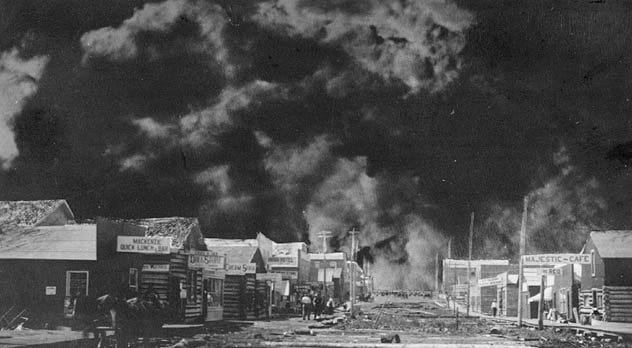 The Great Porcupine Fire swept through Northeastern Ontario in July 1911, at the height of a local gold rush, and was so named because many people took shelter from the wildfire by retreating to boats on Porcupine Lake. The fire burned out nearly 500,000 acres of forest, along with numerous towns and mining camps. The death toll is unknown.

The survivors who took refuge on the lake have recounted some harrowing tales, including the story of a woman who gave birth while trapped on the boats. The nearby Salvation Creek got its name when it saved the lives of a group of miners, but others were less fortunate. When railcars of dynamite exploded, shock waves sent across the water caused a number of people to drown.

One mine boss took his 22 employees, his wife, and his daughter into the West Dome Mines. They suffocated when the fire engulfed the entrance. 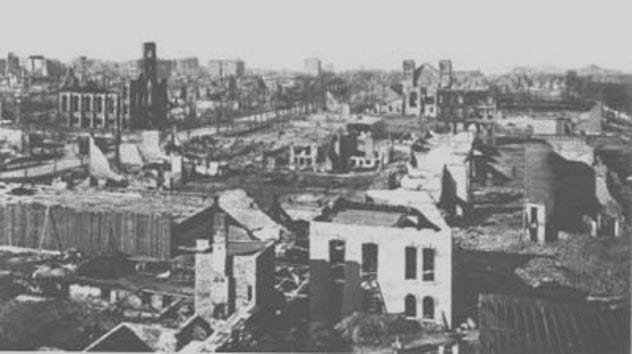 Wildfires destroyed huge parts of Michigan’s “thumb” in 1871 and 1881. During the first fire, many people couldn’t even make it out of their homes, and many of those who did make it to the shores of Lake Huron were drowned in the choppy lake waters. Others tried to shelter in wells, and many died there.

The 1871 fire laid the groundwork for the Great Thumb Fire of 1881 by drying out the wood that didn’t burn. At least 300 people died in the fire, and 14,000 were made destitute and homeless. Some were permanently blinded by the heat and ash, but at least one man survived thanks to a bizarre stroke of luck: He had been out hunting and had killed an elk. He managed to gut the creature, crawl inside, and escape the worst of the blaze. 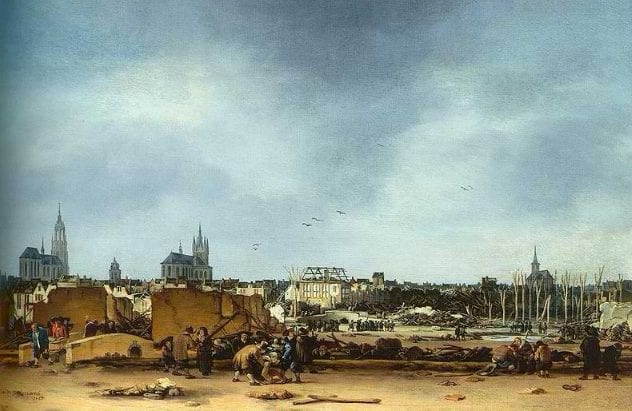 On October 12, 1654, Cornelis Soeens walked into a gunpowder storehouse in the middle of the Dutch city of Delft. Moments later, around 40,000 kilograms (90,000 lb) of gunpowder exploded. No one knows exactly what happened, but some sources suggest the inspector was, rather unwisely, carrying a lantern.

The explosion—and the following fires—destroyed about a quarter of the city. Around 100 people were confirmed dead (with the actual death toll unknown), and thousands were injured. Fires consumed many of the wooden homes that managed to survive the initial blast. Protestant preachers took the tragedy as a sign that the End Times had been finally brought, instigated by the rise of the Catholics.

The explosion claimed the life of Carel Fabritius, a student of Rembrandt. Bizarrely, one of the survivors was a baby, rescued an entire day after the explosion. She was still sitting in her high chair, still giggling, and still holding an apple. 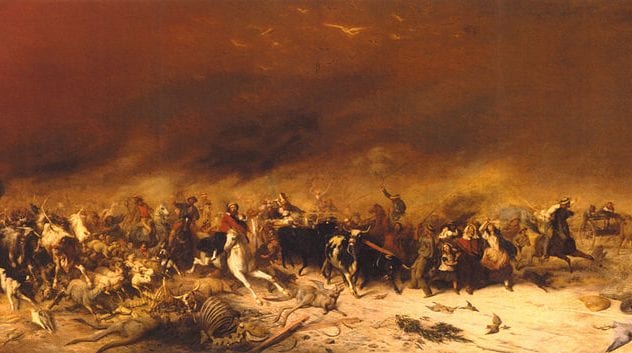 Brush fires are common in Australia, but in 1851, the high temperatures, dry months, and the high gum resin content of the native plants meant that the Outback was a powder keg just waiting to go off. The culmination was on Black Thursday (February 6), when smoke from the fires blacked out the entire sky.

Newspapers later reported that it wasn’t only fires that swept across Australia, but also clouds of air filled with heat, fire, and suffocating sand. The Argus Newspaper painted the horrible picture of men, women, and children trying to run on horseback, unable to stay ahead of the inferno. Areas that weren’t destroyed by fire were still subjected to stifling heat and smoke, trapping countless people indoors to watch and hope the winds didn’t change.

The heat continued throughout the rest of the month. Watering holes, creeks, and rivers were completely gone. 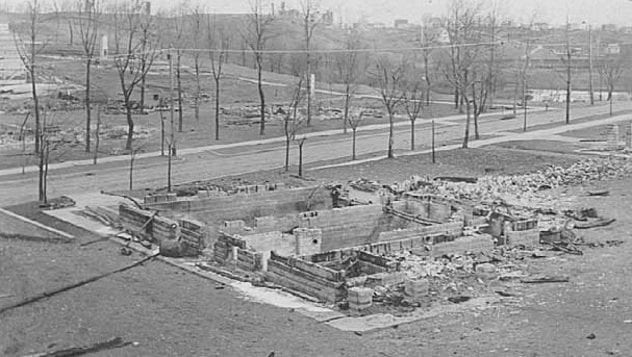 The 1918 Cloquet Fire lasted for only about 15 hours, but it killed hundreds of people and consumed around 3,900 square kilometers (1,500 mi2) of Minnesota forest. It was more accurately a series of around 50 separate fires caused by a combination of wind, dry weather, dry lumber and wood waste from the area’s timber industry, and sparks from the area’s trains.

The fire smoldered for a while before the devastation really started, so the residents of Cloquet had enough warning to escape the worst of the blaze. More than 7,000 people were shuttled to safety by some of the same trains that started the fire.

By the time the fire reached Duluth, escape was down to luck, an idea illustrated by a terrifying comparison: If the world’s fastest sprinter was given a 90-meter (300 ft) head start, he would be engulfed in flames in 30 seconds. Some survivors drove their cars into Moose Lake and waited underwater. One schoolteacher survived by retreating to a lakeside pier and dousing the wood with water to keep it from burning. 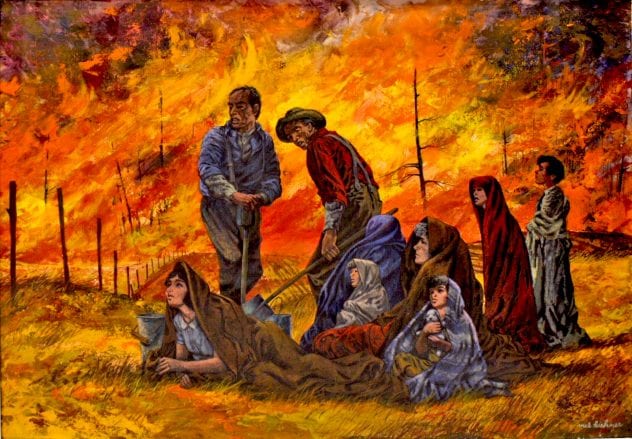 A series of five major fires broke out in the Great Lakes region on October 8, 1871. The most famous is the Chicago Fire, but the deadliest was the Peshtigo Fire. More than 1.5 million acres were consumed (more than twice the area of Rhode Island), smoke was seen from Baltimore, and between 1,200 and 2,400 people were killed. Peshtigo itself was destroyed in a single hour.

Survivors described the fire moving like a tornado. Some tried to flee on foot and burst into flames as they ran. Others tried to take shelter in nearby water, where some died from hypothermia. Others, thinking that it was a tornado, headed into their cellars and basements, where they succumbed to the heat. Bodies were still being found years later.

One survivor, a 21-year-old man, only lived by a strange stroke of luck. Thinking there was no escape, he stabbed himself, but the knife was too short to kill him, and the fire missed him, too.

3 The Great Fire Of Smyrna

The most widely accepted date for the beginning of the fire that destroyed all of Smyrna is September 13, 1922. The fire burned for nine days and forced around 400,000 Greek and Armenian citizens from their homes. Although Turkey still denies it, most historians agree that the fire was part of the genocide during the Greco-Turkish War. As the fires burned, the Turkish army continued their march through the city, killing as they went

It was against that backdrop that the most unlikely of heroes stepped up: Asa Jennings was a failed minister from Upstate New York who had taken a position with the Smyrna YMCA. When confronted with hundreds of thousands of citizens huddled along the coastline, Jennings, with the help of the US Navy’s Lieutenant Commander Halsey Powell, started securing ships to ferry the refugees to safety. The men are credited with saving around 250,000 lives, and their story was largely buried in the denial and finger-pointing that followed. 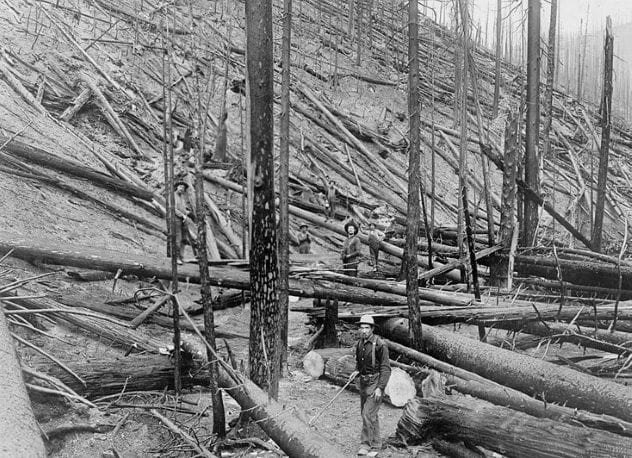 Firefighter Joe Halm later described what happened on August 20, 1910, at his camp along Idaho’s St. Joe River: He remembered hearing something in the distance, likening it to a distant waterfall or windstorm. The sound was coming from overhead on wind that was rustling the treetops ever so slightly.

It was a wall of fire.

Halm and his crew of firefighters retreated to a creek, salvaging only some buckets of water. Miraculously, they were able to hold their ground as the forest around them burned.

They were experiencing part of the Big Burn (also called the Big Blowout or the Great Fire of 1910), which destroyed a huge part of Idaho and Montana during the final days of an incredibly dry summer. Around three million acres were consumed by flames that sometimes raced through the forest canopy before descending to the ground. The fires resulted in renewed funding for the US Forest Service. 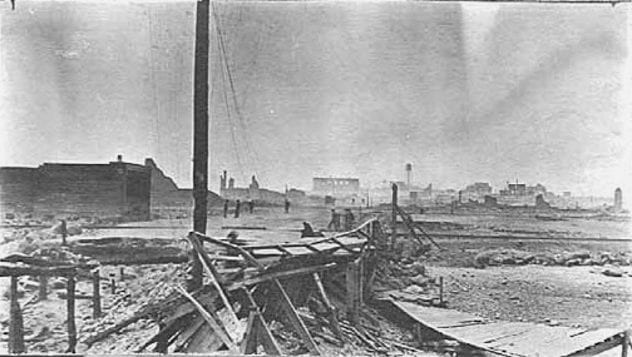 In 1894, the Brennan Lumber Company churned out around 60,000 meters (200,000 ft) of board lumber every day. The dry wood, coupled with the sawdust and waste, was disaster just waiting for a spark. The spark happened on September 1, and by the time smaller fires joined up to converge on Hinckley—and the lumber company—they were already burning from the east, south, and the west. Flames rose 60 meters (200 ft) high, and more than 400 people died. Some of them would not be found until 1898.

While some waited the fire out in the middle of potato fields or headed to the Grindstone River, trains shuttled survivors out of the burning city. As people fled in droves and appealed to the surrounding towns for help, the St. Paul and Duluth Depot’s telegraph officer, Tommy Dunn, continued to man the office and monitor communications. His last message was, “I think I’ve stayed too long.” He died in the blaze. 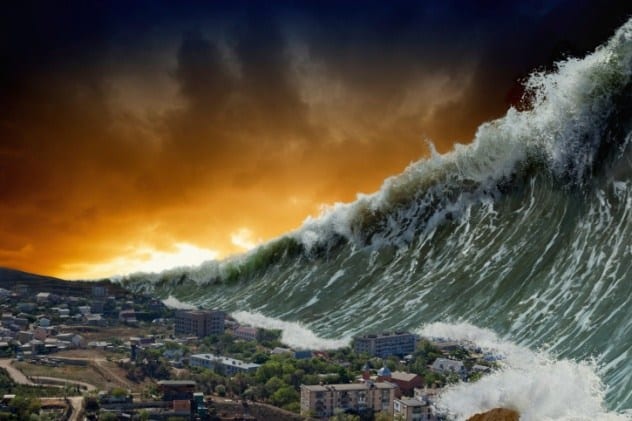 Fires are not the only disasters! Here are some of our best lists on historic disasters: