It’s impossible to know how many irreplaceable treasures have been damaged or harmed throughout history. However, in modern times, it’s possible to document instances of items being damaged in unusual and preventable ways. Here are ten recent cases. 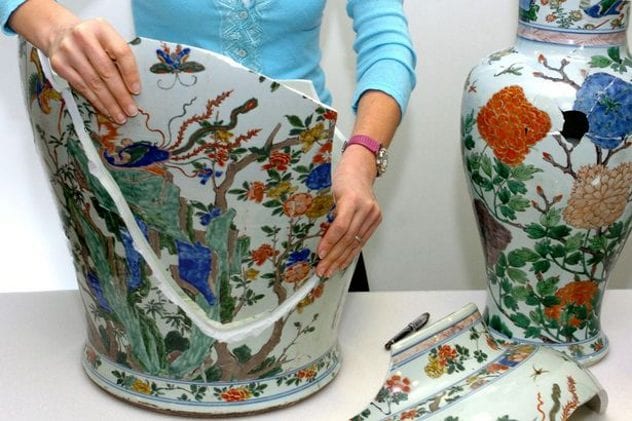 For several decades, three priceless Chinese vases from the Qing dynasty (specifically the late 17th and early 18th centuries) were on display in the Fitzwilliam Museum at Cambridge. Although they weren’t protected by a glass case of any sort, they remained untouched until 2006, when an unfortunate visitor tripped down a staircase and subsequently destroyed all three of the vases.

The visitor, a 42-year-old man named Nick Flynn, said that he realized he’d stepped up the wrong staircase, and while turning around to go down, he stepped on his untied shoelaces and fell down due to a lack of handrails. The vases were valued at £100,000, and although Flynn was genuinely sorry, he was banned from the museum.

9 Vase Destroyed By A Protester 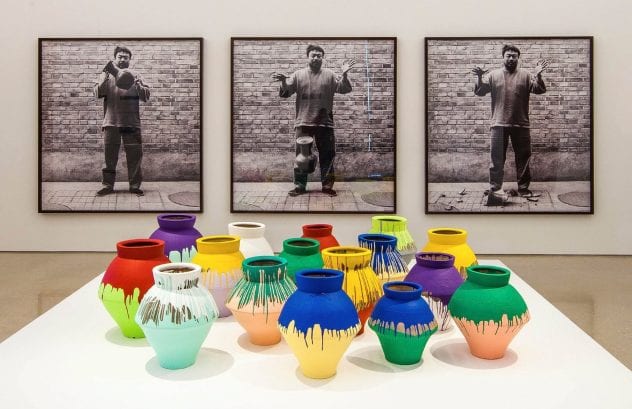 Fragile vases are easy enough to destroy by accident, but sometimes they’re destroyed on purpose, as was the case with an extremely valuable vase created by Chinese artist Ai Weiwei.

In 2013, the Perez Art Museum opened in Miami, Florida, and one of its featured exhibits was a group of painted vases aptly named Colored Vases. Some time after the museum’s inauguration, a local artist named Maximo Caminero boldly took one of the vases and smashed it after a guard asked him to put it down.

Caminero was arrested for criminal mischief but was released after posting bail. When asked why he destroyed the vase, which had an estimated value of $1 million, Caminero stated that he was protesting the museum for excluding local artists. In 2014, Caminero was sentenced to 18 months probation and fined $10,000, which was the appraised value of the vase after the incident.

8 Painting Ruined By A Clumsy Preteen

Anyone with children knows that they can be quite uncoordinated, but they don’t usually manage to destroy priceless paintings. In 2015, the Huashan 1914 Creative Park in Taipei was hosting a Leonardo Da Vinci exhibition that also featured other Renaissance-era artwork, including a 17th-century still life by Paolo Porpora named Flowers. The painting was valued at $1.5 million and was displayed along with 50 others, including some by Da Vinci.

The painting’s demise was caught entirely by CCTV surveillance: A 12-year-old boy turned away from the painting and then tripped over a rope barrier. He tried to stop his fall, punching a hole in the painting in the process. The exhibit curator didn’t blame the boy and said it was purely an accident. However, the painting was permanently damaged. 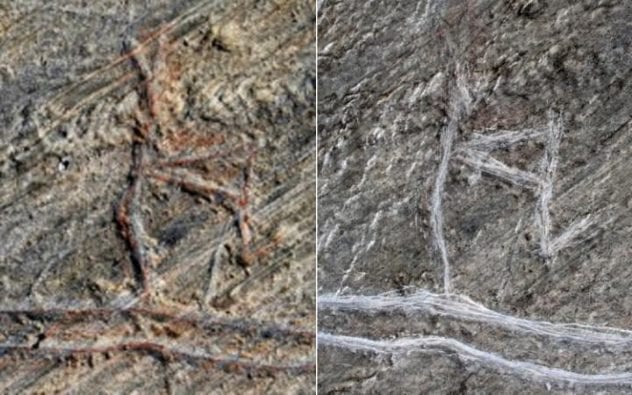 It’s been said that the road to Hell is paved with good intentions. Such was the case with a 5,000-year-old carving on the Norwegian island of Tro. The carving was of significant cultural importance: It was one of the earliest depictions of skiing and was used to promote the 1994 Winter Olympics. However, in July 2016, the carving was destroyed.

It all started when a group of Norwegian youths went to see the carving and thought that they could improve its visibility, as it has noticeably faded over the years. Rather than helping, they destroyed the carving as they attempted to scratch over it. According to the mayor of a nearby town, the youths had “good intentions,” but the damage was irreversible. The youths could face prosecution under Norway’s Cultural Heritage Act.

6 The Mutilation Of King Tut 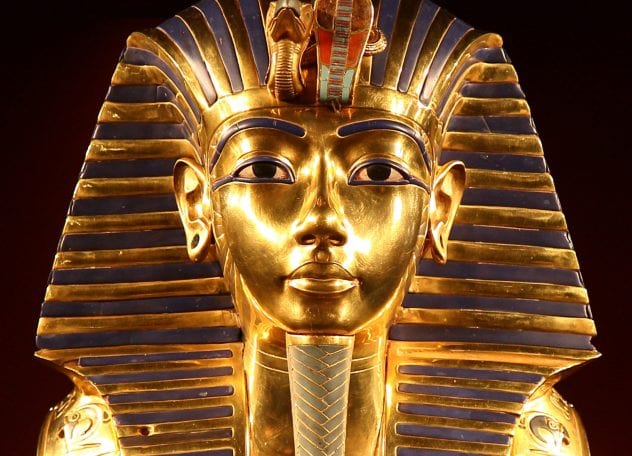 Since the discovery of King Tutankhamun’s tomb in 1922, his body and possessions have been damaged by incompetence. Firstly, Tutankhamun’s body has been mutilated, to say the least. In 1968, Tut’s “member” was found to be missing. Since it was documented that his genitalia were intact when he was unearthed in 1922, the mutilation had to have occurred afterward. A CT scan later revealed his missing privates in the sand surrounding him.

In a more recent incident, Tutankhamun’s burial mask, one of the most iconic Egyptological artifacts ever uncovered, was damaged when workers broke off its beard in 2014. They then worsened the situation by trying to glue the beard back on with epoxy, which further damaged the artifact. It took extensive work by a team of experts to repair the beard in 2015. The people responsible for the damage could face prosecution. 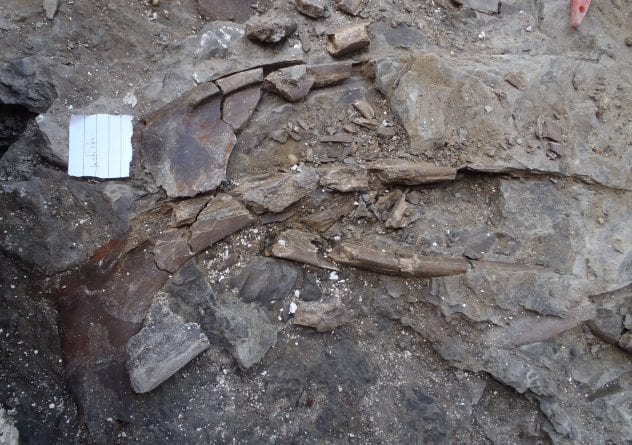 In 2012, graduate student Philip Bell led a team from the University of Alberta on a paleontological excavation. His work proved fruitful; he found the remains of a duck-billed hadrosaur, one of only a handful of specimens ever found. The team covered their find and planned on returning to the site later to extract the fossils.

When they came back, they found that the site had been vandalized, and the irreplaceable fossils were smashed. Also present were several empty alcohol bottles, suggesting that the vandals were intoxicated.

This wasn’t the first incident that Bell’s team had to deal with: There had been three previous occasions where the site was disturbed by drunk individuals, but this one stood out due to the importance of the destroyed discovery. Bell’s team salvaged what they could. Other fossil vandalism and theft cases have been reported throughout Canada, but the perpetrators have never been caught. 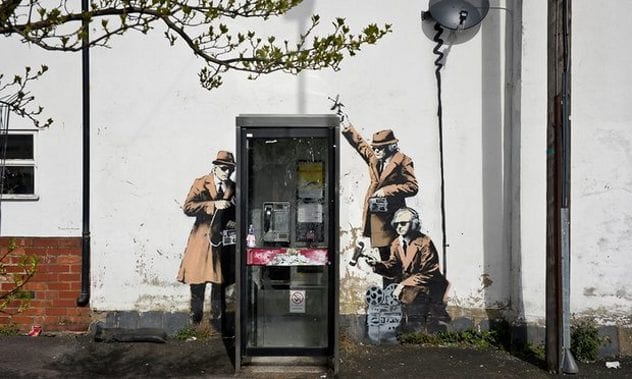 The widely polarizing artist Banksy stands as one of the most well-known figures in the art world. However, since the majority of his artwork is in the form of murals, usually painted on the exteriors of public buildings, it’s difficult to acquire his authentic works. Sometimes, his art has been destroyed when workers have either demolished or cleaned off his paintings, not realizing their true value. This was the case with a Banksy painting called Spy Booth, which was painted on the side of a house in Cheltenham, England, in 2014.

In January 2016, the house was listed for sale, and in the description, it was mentioned that some repair work was needed. The Cheltenham council had granted retroactive planning permission in February 2015, meaning that the mural couldn’t be removed without council permission. However, in April 2016, workers doing urgent repair work unknowingly reduced the mural to rubble.

The owner of the home stated that he had received offers as high as £1 million but refused. In the end, all he could do was salvage what little remained of the mural and give it to the borough council. 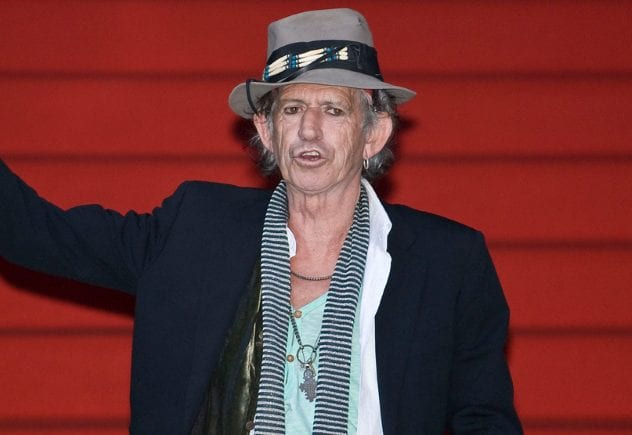 Rolling Stones band member Keith Richards has spent decades raising people’s eyebrows, but one incident almost tops them all. In 2010, Richards was making appearances to promote his recently published autobiography, and one of the locations he visited was the main branch of New York Public Library. There, he was allowed to sit in the office of a library worker before speaking.

While waiting in the room, Richards lit up a cigarette and used a nearby flower pot as an ashtray. Little did Richards know, the flower in the pot was an incredibly rare Phalaenopsis amabilis, also known as a moon orchid. The flower had been meticulously cared for, but after being used as an ashtray, it died four days later. However, the library staff said that Richards acted like a “gentleman” and left an autograph with his cigarette ash.

2 145-Year-Old Guitar Smashed For A Film

In a scene for the Quentin Tarantino film The Hateful Eight, actor Kurt Russell was supposed to smash a guitar. Since the film was supposed to take place in the 1870s, a period Martin guitar was provided by the Martin Guitar Museum for the production. Unfortunately, a terrible mistake resulted in the destruction of the guitar.

In the scene, Russell was supposed to take the guitar and smash it, but the 145-year-old instrument was supposed to be swapped with a copy. Russell was not informed of this and mistakenly destroyed the real guitar, which was possibly the only one in existence.

Since then, Martin Guitar Museum stopped their policy of loaning out guitars. When asked about the value of the guitar, they responded that it was “not replaceable.” 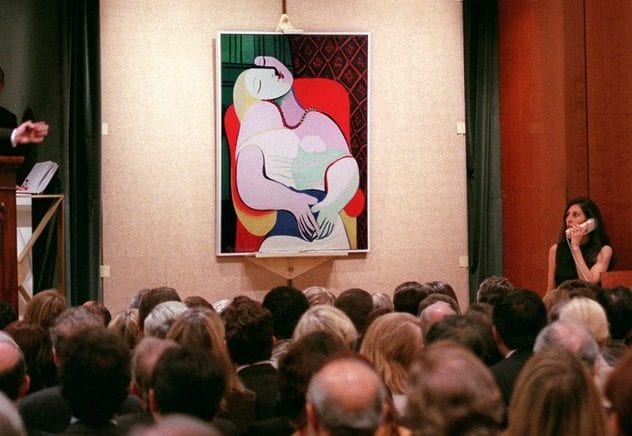 In 2006, casino magnate Steve Wynn made one of the costliest mistakes in art history. Wynn had decided to sell some of his paintings, including Picasso’s 1932 painting La Reve, which he had acquired in 2001. He soon found a buyer in collector Steven Cohen, who agreed to pay $139 million for the portrait. Before he gave Cohen the piece, though, Wynn decided to show it to his friends.

During the exhibition, Wynn, who suffers from an eye condition that affects his depth perception, made several wide gestures while showing his paintings. While he was talking about La Reve, Wynn’s elbow went through the canvas. The sale was voided, and Wynn sent the painting to an art restorer. In 2013, the situation actually improved when Wynn sold the restored painting to Cohen for the even higher price of $155 million. 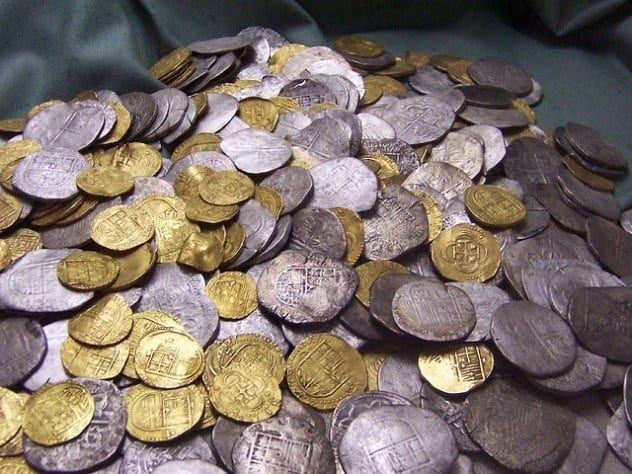 That’s the end of the list, but fortunately we have many more for the treasure hunters amongst us!