A modern wonder is imaging and our ability to share pictures globally within seconds. People alive today can surf the web and see the most incredible scientific sights without ever having to step inside a laboratory.

Pictures showing freshly solved mysteries and violent things in space are fascinating, but they pale next to unusual world firsts. In recent years, photographers have captured extinct animals, shock waves, and the most powerful light in the universe flashing right here on Earth. 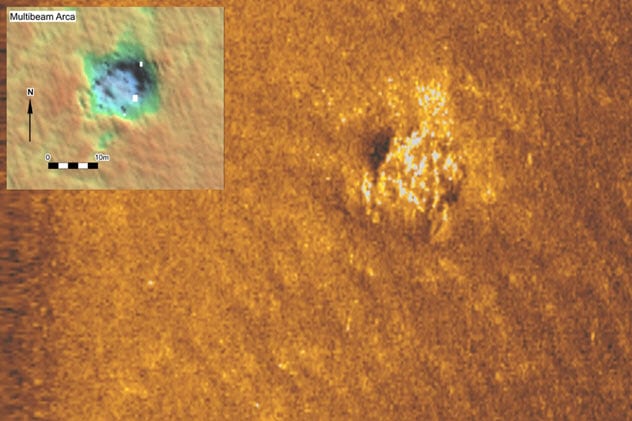 In 2019, metal salvagers searched for shipping containers that had been recently lost in the North Sea. They snapped a sonar image of something near the Dutch island of Terschelling. Hoping that the anomaly was a steel container, the crew sent down a retrieval arm. Instead of scrap metal, the grab returned with ship timbers and 5 tons of copper sheets.

Incredibly, the salvagers had snagged a piece of what could be the oldest ship discovered in the region. The wood belonged to a 500-year-old vessel. Measuring 30 meters (100 ft) long, it carried a cargo of copper. The sheets were likely destined for Antwerp to become some of the Netherlands’ earliest copper coins. Indeed, their chemical signature was identical to copper coinage introduced in the 1500s.

The vessel was also tentatively called a “missing link” in the history of Dutch shipbuilding. The hull displayed an intermediate structure used when builders started to abandon an old style called “clinker” for the more successful “carvel” style that strengthened Dutch ships and allowed them to trade globally.[1] 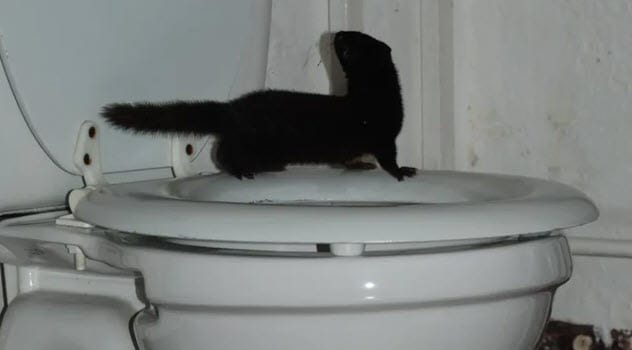 The Colombian weasel is known from only six animals and had never been photographed alive. In 2011, an architect stumbled upon the rarest carnivore in South America by accident. It was not a glorious moment, as befitting for the first encounter with a long-lost creature. The black weasel was perched on top of a toilet.

When Juan M. de Roux, an amateur naturalist, saw the creature at his parents’ house, he initially thought it was the common long-tailed weasel. He took several snaps before releasing the frantic animal. It had become trapped after slipping into the bathroom through the roof or flooring, both of which were being renovated.

After de Roux uploaded the images to the iNaturalist app, a database for citizen scientists, the truth emerged. He learned of the existence of the Colombian weasel, and experts confirmed that it was a living specimen.

Considering that some believed the species was extinct, this came as a welcome surprise. The de Roux house was near Colombia’s National Natural Park Farallones de Cali. The discovery suggested that a big population of Colombian weasels live in the park.[2] 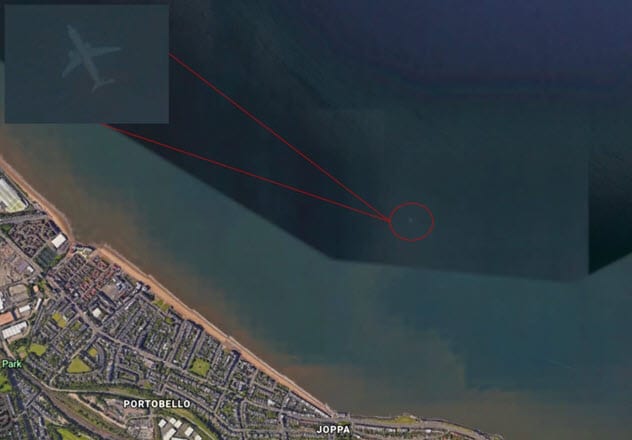 Late in 2018, Robert Morton found something on Google Earth. At the coordinates 55 degrees 57 minutes 26 seconds north latitude and 3 degrees 05 minutes 35 seconds west longitude was a plane. The image showed what appeared to be an airliner in the sea near Edinburgh in Scotland.

He reported it to the Mirror Online, and the tabloid published the weird image. A Google spokesperson stood ready with an easy explanation. The ghostly plane was not a real aircraft.

Sure, when the original photograph was taken, the subject was a nuts-and-bolts airliner. However, Google uses a blend of several images in a composite technique that gives the sharpest resolution.

The images are drawn from satellites and aerial photography. Sometimes, one of them captures a passing object—like a plane. The latter got a bit shuffled, blurred in Google’s patching process, and ended up looking like a flight disaster.[3] 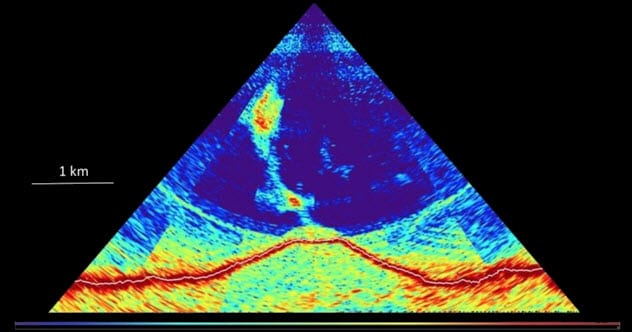 Geologists have grappled with a mysterious event since May 10, 2018. A seismic occurrence was detected near the island of Mayotte in the Indian Ocean. Its nature was epic enough to cause rumbles and earthquakes that were felt around the world. The source was unknown, but scientists figured the culprit was a monster volcano that had lost its temper somewhere on the seafloor.

When a research vessel sailed for the coast of Mayotte, it was not just to gather data. The island was inhabited and continued to experience disturbances. To solve the mystery and safeguard the locals, scientists studied the area.

Incredibly, they found a volcano that had not been on the seabed six months before. It was not a tiny hill, either. The thing was 800 meters (2,624 ft) high and 5 kilometers (3.1 mi) wide.

Tellingly, its location matched the hot spot where the shakes and rumbles were coming from. Estimates now credit the still-active feature with the biggest underwater eruption ever recorded. In 2019, a remarkable sonar image captured the volcano in a colorful way.[4] 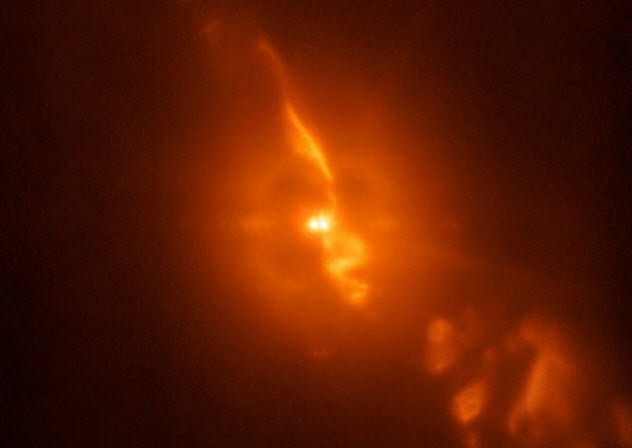 R Aquarii is a binary star system consisting of a red giant and a smaller white dwarf. The two companions are at the end of their lives. A star’s death is never a subtle event, but a binary star has the potential to be extraordinarily violent. This is because its partner often interferes—with volatile results. R Aquarii is a good example of how two stars’ death throes can destroy each other.

In 2018, a stunning photo was taken of the system. It showed the red giant shedding its outer layer and the dwarf star cannibalizing it. It was a dangerous meal. The material consumed by the dwarf repeatedly led to thermonuclear explosions on the smaller star’s surface. The blasts flung the dwarf’s own material out into space alongside the red giant’s outer layer.[5]

Taken by the European Southern Observatory, the image highlighted the devastation in the shape of swathes of matter surrounding the stars. Located around 650 light-years from Earth, the system will probably terminate with a mind-blowing explosion classified as a Type Ia supernova. 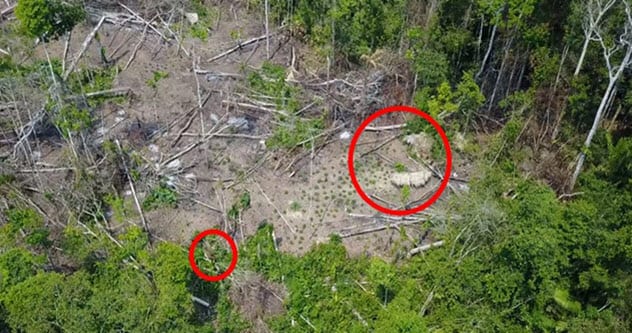 There are around 19 hidden tribes in the Brazilian state of Amazonas. Their isolation is not because they think the world is a giant rain forest. It appears that they chose not to contact “civilization.”

This is understandable. Several tribes have been massacred by mercenaries employed by colonists, miners, and farmers who want the land but not the natives. This is because indigenous communities come with rights, and these rights interfere with financial opportunities.

Those fighting to safeguard the tribes must also keep their distance. Some tribes are aggressive and can also die from communicable diseases carried by outsiders.

In 2017, an expedition produced the first photographs taken by a drone of an Amazonian community. The chosen group had been known for years to Brazil’s National Indian Foundation (Funai), which also operated the camera. The photos showed a clearing and a few individuals. They seemed unaware of the drone, which was a good thing. Researchers want to learn their ways but discreetly so.[6] 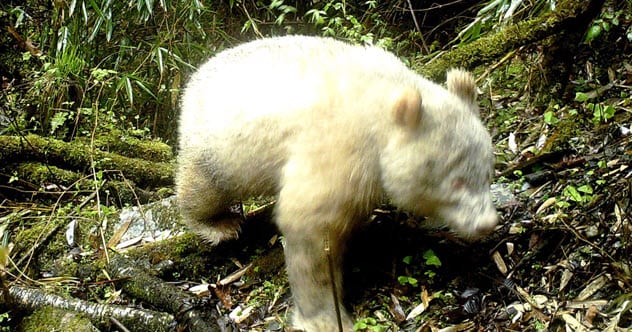 In 2019, a camera trap was activated. Such devices are used by researchers to take photographs of animals with a tendency to hide deep in the wilderness. Usually, an animal’s movement triggers an automatic photo session. This particular trap was located in a forest in the Wolong national nature reserve in China.

When the image was viewed for the first time, it must have been a heart-stopping moment. It showed a rare wild panda. There was no sign of the species’ trademark black body bands, ears, or eye patches. In fact, the bear was entirely white. A close analysis of the image showed the creature had reddish eyes. This explained the unusual coat color—the creature was an albino.

It also appeared to be a strong, healthy individual around one or two years old. The giant panda is already the rarest bear on the planet, but finding an albino is exceptional. Managing to take a photo of one is even more remarkable, and indeed, the Wolong image appears to be the first of its kind.[7] 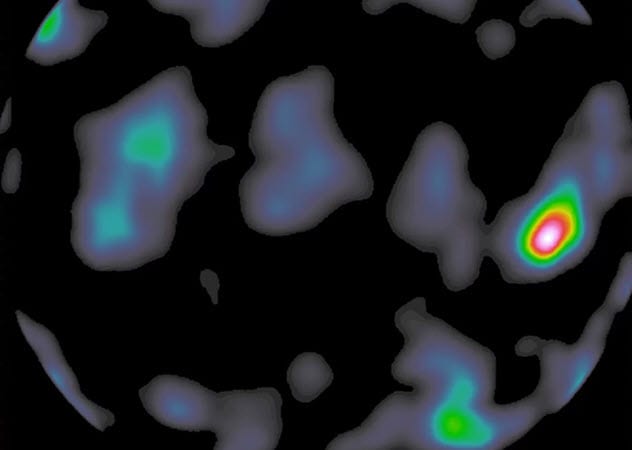 When it comes to what type of light holds the most energy, nothing beats gamma rays. They explode from bursting suns and colliding stars and even radiate from black holes. These rays glow with such intensity that all other light in the vicinity dims into obscurity.

Naturally, scientists are keen to study gamma rays. The good news is that sometimes they appear on Earth. However, the most powerful flashes in the universe are also exceptionally brief. As they last about a millisecond, their locations can be difficult to catch or predict. At least, researchers know that they appear in massive thunderclouds due to electron interactions, but the exact science remains mysterious.

In 2017, an ambitious project launched a special observatory to the International Space Station. The aim was to catch the elusive phenomenon by viewing storms from space.[8]

On June 18, 2018, a thunderstorm loomed over Borneo, an island in Southeast Asia. In a world first, a gamma ray that erupted from the storm was captured as an image. The observatory also showed that the flashes happen frequently on Earth. During the project’s first year, astronomers captured over 200 bursts. 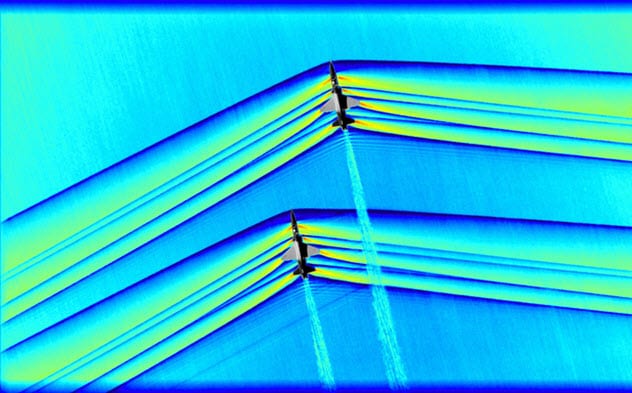 One of the most breathtaking images recently came from NASA, where scientists have spent years trying to photograph shock waves. Researchers want to silence airplanes because their noise and sonic booms are undesirable over residential areas.

Sonic booms happen when a plane goes so fast that molecules cannot move out of the way quickly enough. They gather in front of the craft, and when the latter exceeds the speed of sound, the barrier snaps loudly. This change in pressure is called a shock wave.

To capture the waves, NASA spent over a decade developed an imaging system. In 2019, it was placed aboard a NASA B-200 King Air and photographed T-38 US Air Force jets flying below. In a world first, scientists caught shock waves streaming off supersonic jets and saw how the waves influenced each other.

One plane was in the wake of the other, and they were about 9 meters (30 ft) apart. The rear T-38’s shock waves were curvier due to the leading jet’s related forces. The high quality of the images could help unravel the nature of shock waves and, perhaps, even find a way to silence them.[9] 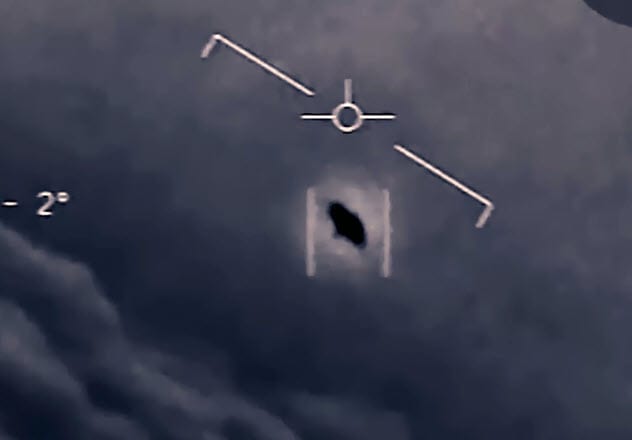 In 2014, the aircraft carrier Theodore Roosevelt arrived at the East Coast. Aboard was a squadron training for deployment in the Middle East. The planes had decades-old radars, and after an upgrade, the screens started showing false trails.

The pilots soon realized that the “glitches” were physical things—especially after one jet’s missile locked onto an object. The same pilot also experienced another blip on his radar and decided to maneuver his plane beneath it. He should have been able to see it, and radar confirmed the presence of something. But there was nothing there.

They remained invisible except for remarkable performances on radar recordings. For example, supersonic speeds reached heights of 9,144 meters (30,000 ft) and showed no visible engine or infrared exhaust trails.

The objects arrived on most days and performed maneuvers fatal to human pilots—like sudden stops while flying at a great speed. At some point, one nearly collided with a jet. It zipped past the cockpit so closely that it became visible. It looked like a cube with a sphere inside it.[10]

The pilots who went public could not explain the experience but also refused to link it to extraterrestrials. The sightings stopped when the Roosevelt sailed for the Persian Gulf in 2015.

Read more about rare images on 10 Ancient Surfaces With Rare Images And Carvings and 10 Amazing Rare Cloud Formations in Images.