Behind the poems and the pictures, Theodor Geisel, the real Dr. Seuss, was an adult man, with adult thoughts and adult experiences. He created subversive things, was sure he would be remembered as a risque comedian, and lived a life that could never be published between the pages of a children’s book. 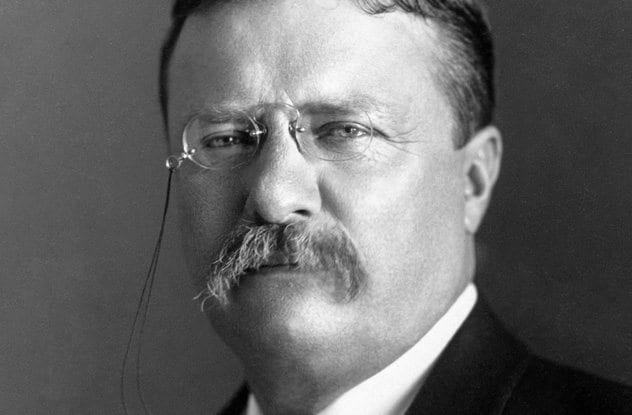 World War I was in full swing, and the young Seuss was a plucky boy scout doing his part to help the war effort. He went door-to-door, and, thanks largely to a $1,000 purchase from his grandfather, became one of the most successful war bonds salesmen in his town.

Seuss and nine other boy scouts were honored for their efforts. They were brought up on stage at the Municipal Auditorium and presented award by the president himself: Theodore Roosevelt.

For the rest of his life, Seuss had a fear of crowds. Later in life, he lived in isolation on a mountain top. He skipped his speaking engagements, terrified of being publicly humiliated the way he was as a boy. 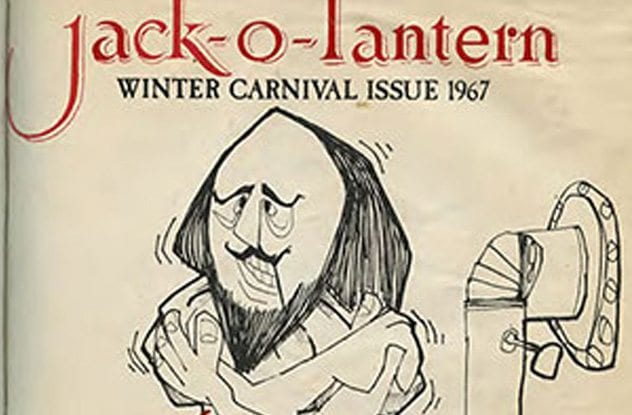 In the 1920s, Seuss went to Dartmouth. Here, he wrote for the Dartmouth comedy magazine, The Jack-o-Lantern, and rose up to be the editor-in-chief. That changed, though, when Seuss and a few friends were caught slamming back gin. 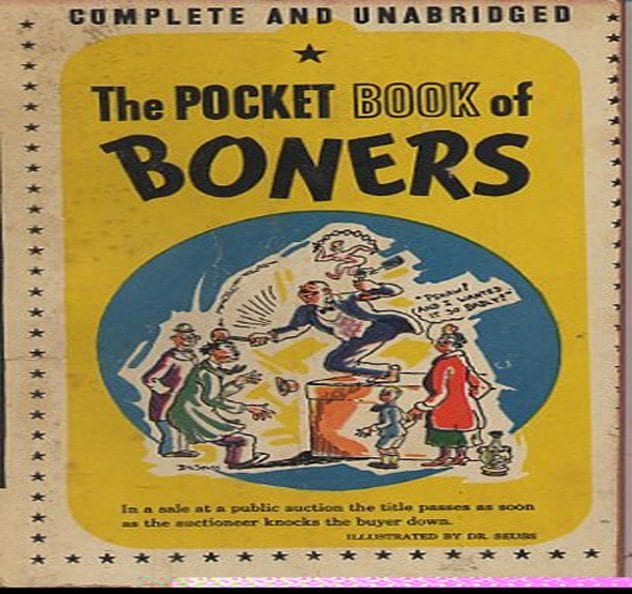 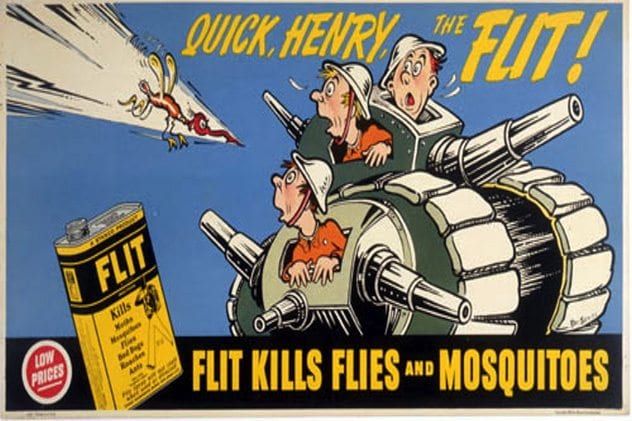 The pesticide company Flit saw one of his cartoons and hired him to work on their ad campaign. Seuss’s slogan, “Quick Henry—The Flit!” soon became a national sensation, recognized in every household and even worked into the routines of comedians like Jack Benny.

Seuss’s work with Flit got him into the world of advertising. Soon, he was making ads for Standard Oil, as well and earning enough money that he could do his own experiments on the side. 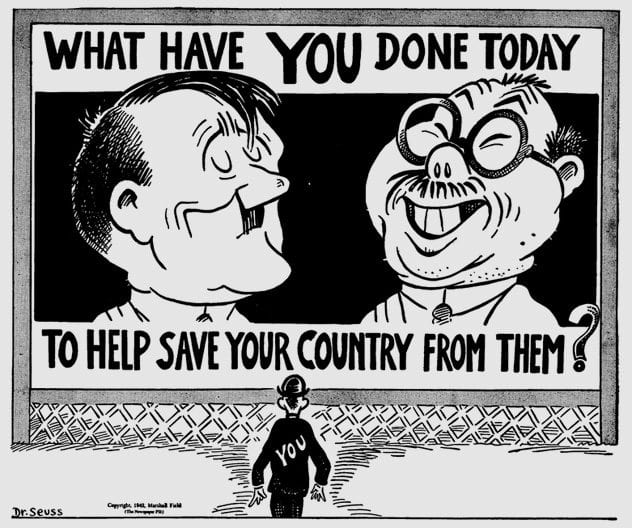 Seuss also worked with Chuck Jones, the director behind Looney Tunes,. He was a part of a team making propaganda videos for soldiers. Their most famous was the “Private Snafu” series, named for the phrase “Situation Normal:All F—ed Up.”

He made political cartoons as well, pushing people buying war bonds to “Slap a Jap’s” smile off his face. A lot of these cartoons voiced his support for Japanese internment camps. Seuss was passionate about it. “If we want to win, we’ve got to kill the Japs,” Seuss wrote. “We can get palsy-walsy afterward with those that are left.”

When the war ended, though, he visited to Hiroshima and changed his tune. After, he wrote, Horton Hears a Who, dedicating it to a man in Kyoto. 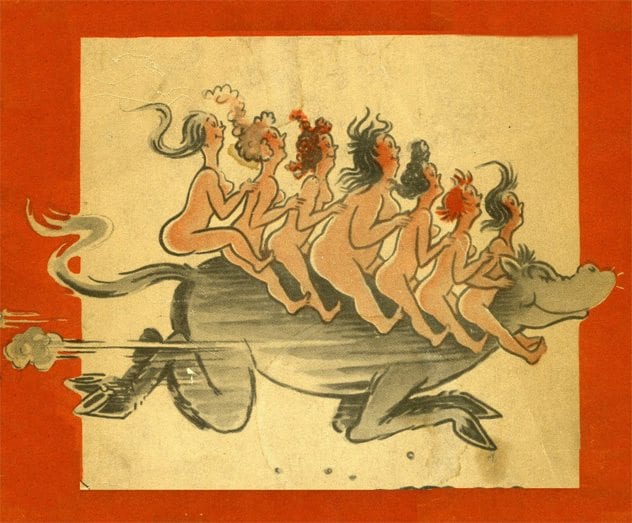 He was sure this was his destiny. As a condition of his contract, Seuss insisted they let him write an adult book first: The Seven Lady Godivas, a story about seven naked girls. Nearly every page of the book featured another picture of a naked lady, drawn by Dr. Seuss—in the exact same style he used in his kids books.

The book flopped, and Seuss was forced to settle for a career as a legendary children’s writer. “I tried to draw the sexiest babes I could,” Seuss complained, “but they came out looking absurd.” 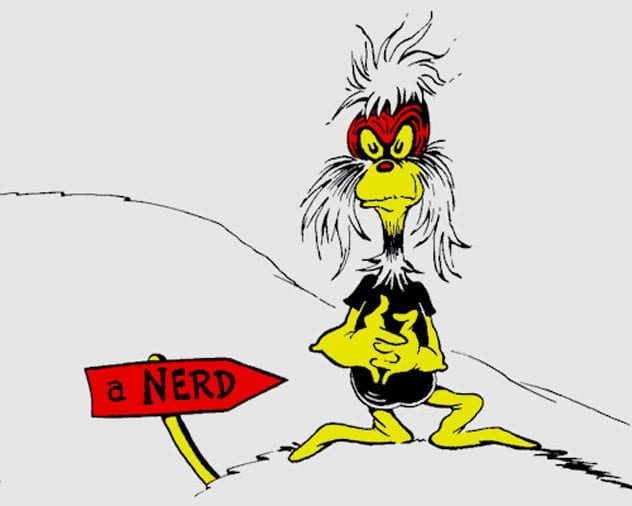 Dr. Seuss holds the unique honor of being the very first person in recorded history to call someone a “nerd.” He slipped the word into his book If I Ran the Zoo, in which a character promises to bring a “nerd” back from Ka-Troo. The use is a bit different, but it’s been theorized the Seuss’s made-up word may have been adapted into the insult we use today. 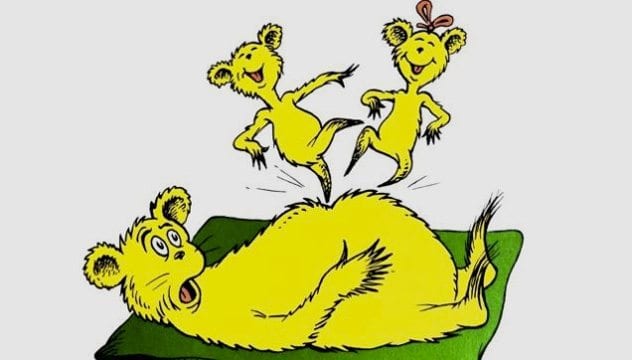 By the time Seuss wrote Hop On Pop, his editors, he believed, would publish anything he wrote. Seuss decided to test his theory out and slipped a family unfriendly line into his manuscript:

2He Was Afraid Of Children 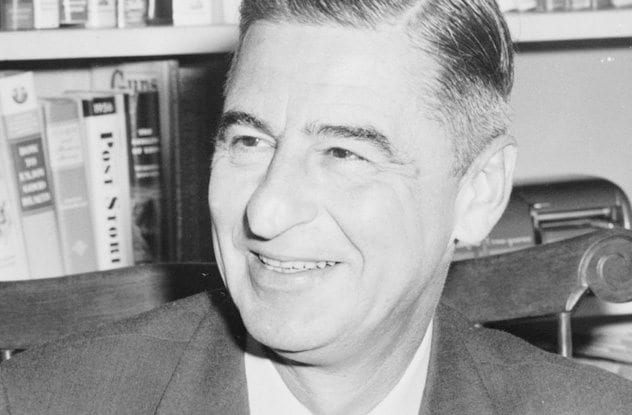 Seuss made his mark as a children’s entertainer, but he never had any kids of his own. “You make ‘em,” he once said, “I amuse ‘em.” Children, he told reporters, made him uncomfortable. “In mass, they terrify me.”

Though he didn’t have any children of his own, he second wife had children before they were married. Her daughter said that Seuss, on his bad days, was “The Grinch”—and Seuss agreed. Seuss based The Grinch on himself, getting the idea after looking at himself in the mirror after Christmas. He even drove a car with a “GRINCH” license plate. 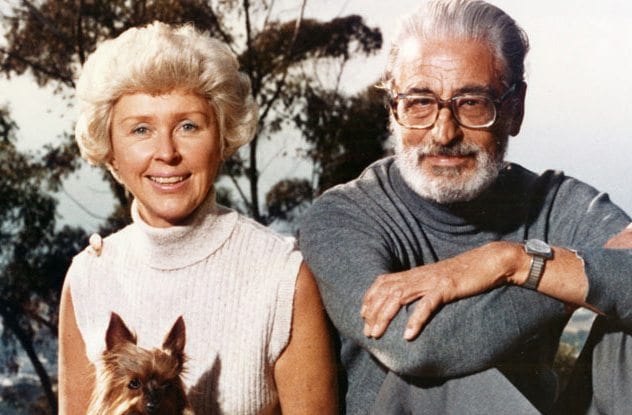 Seuss’s wife Helen was the reason he became an artist. In university, she encouraged him not to settle for a safe career as a teacher and pushed him to chase his dreams as a cartoonist and writer.

Later in life, though, Seuss cheated on her—while she was dying of cancer. With his wife on the throes of death, Seuss slipped out of the house with a younger woman, Audrey Stone Dimond, a longtime friend of both the man and his wife.

When Helen found out, she was heartbroken. The pain was too much for her to bear—and, in the anguish, she took her own life. Within a year, he married his mistress, and stayed with her until he died.