It’s no secret that clowns are absolutely terrifying. Even people who might not admit to being outright afraid of them usually concede that there is something unsettling about them, no matter what form they take. A look at history’s most important clowns shows us that there has always been two sides to this particular figure. 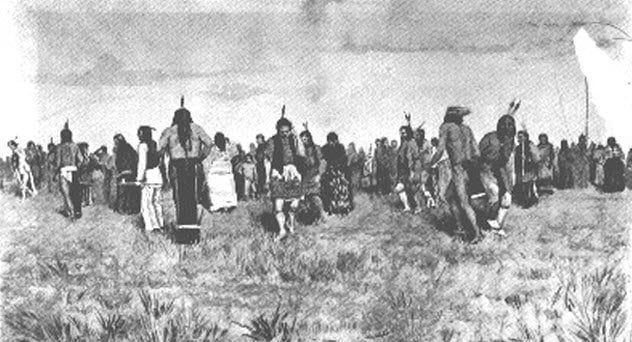 Many Native American tribes had their own types of clowns. The “white fool“—or white crazy man—of the Arapaho isn’t just terrifying in hindsight. He was feared by his own people.

He was called the white fool because he painted himself in white clay, and he was said to have access to a special sort of medicinal magic. That made him powerful, and it was also understood that the white fool enjoyed complete and absolute sexual freedom during ceremonies. That meant anything went with anyone he wanted, and he was one of the most dreaded figures in ritual.

Even in myths, the white fool was a figure in opposition to the heroic, selfless figure of Big Chief, who plotted to rid himself of the fool even though they were brothers. 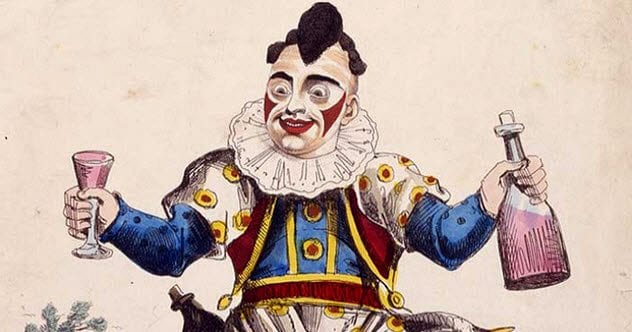 The familiar figure of the modern clown and the idea of pantomime were largely developed by British performer Joseph Grimaldi. He was introduced to the theater by his father, a mad performer known as the Signor or Grim-All-Day.

The Signor claimed that the Devil had once told him that he was going to die on the first Friday of the month. Every time that day rolled around, the Signor locked himself in a room full of clocks and stayed awake all night. To train future stage performers, the Signor subjected them to bizarre tortures like hanging them above the stage in stocks.

Biographers suspect that his upbringing by an unpredictable madman allowed Joseph Grimaldi to create an onstage character that was just as unpredictable and mad. His 19th-century countenance was described as “part-child, part-nightmare,” with a mouth colored the blood red of a gaping wound. He was also cursed with a split personality that wavered between depression and mania.

8 The Clowns Of The Aztecs 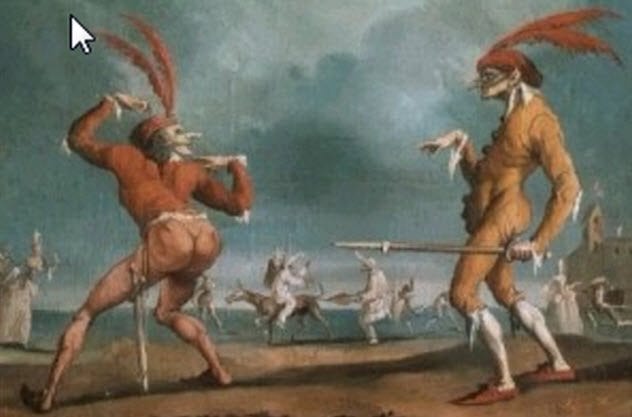 The Aztecs might be associated more strongly with human sacrifice, but they apparently liked a bit of humor as much as the next civilization.

When Hernan Cortes returned to Europe with treasures he had stolen from the Aztecs, he included a handful of Aztec clowns—dwarfs and hunchbacks—in his presentation to Pope Clement VII.

William H. Prescott wrote his master work on the Aztecs and their fall, painting a graphic picture of Montezuma’s personal clowns and fools. Prescott claimed that they were so hideously deformed that they were probably not created by any natural, normal means.

Like other rulers, Montezuma was noted as believing that buried in his clowns’ jests and japes was at least a hint of the truth that no one else dared to tell. 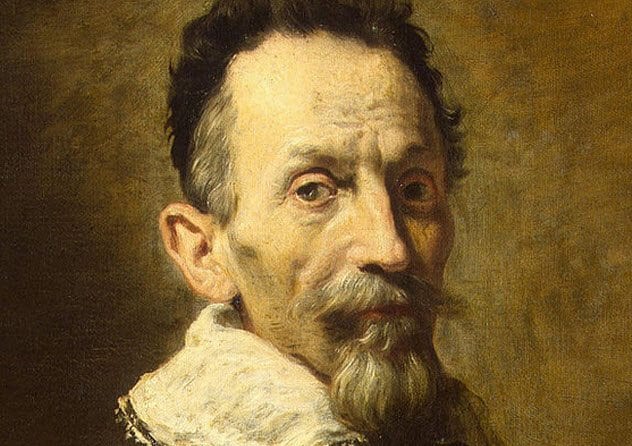 In the 1570s, a group of Italian performers headed out of Italy and into Antwerp and then Paris. They were led by Tristano Martinelli, who had created a particular character for his routine. He dressed in a black leather mask, a full body suit decorated with patches, and a hat decorated with a rabbit’s tail. He also had a wooden sword.

Martinelli adopted the name Arlequin. The character became so popular that he was adding detto Arlechino comico onto his signature within a few years.

The original Harlequin was a servant and an absolute fool. Eventually, Martinelli wore a half-mask with an exaggerated, quizzical expression, and the character became associated with something dark. Parallels were drawn between Martinelli’s Arlequin and Alichino, a demon that shows up in Dante’s famous vision of Hell. 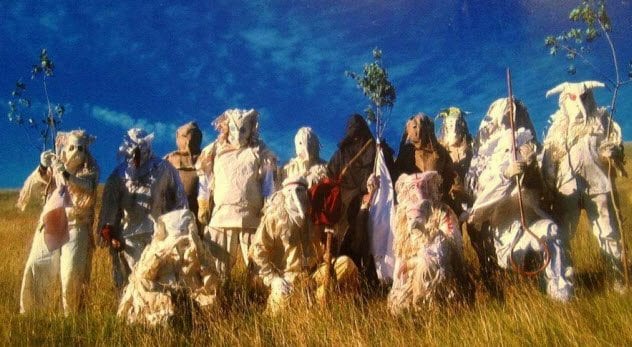 The Native American tribes of the Northern Plains region named their clowns after the windigo, a terrifying, gigantic creature that prowled the forests and preyed on travelers to satisfy its taste for human flesh. Variously called “windigokan,” “wetigokan,” or “wintgogax” by different tribes, the cannibal clowns were deceptively named.

Once a leader had been visited by a vision of the Skeleton Being, a group of 10 men would dress in rags and don masks with long noses. Then the clowns would head out on a hunt. Once their prey was brought back to camp, they would stage an elaborate mock hunt. The clowns would stalk and then flee from everything from the remains of the fallen animal to strips of drying meat, all designed to elicit laughter.

It was the laughter that was medicinal, thought to drive away any demons or evil spirits that were possessing members of the tribe. 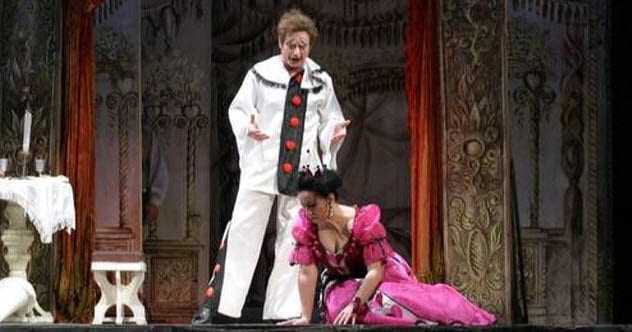 Pagliacci (“The Clowns”), a 19th-century opera by Ruggero Leoncavallo, encouraged the image of the clown as a dark figure. In the work, a group of traveling clowns sets up in a town to celebrate the Feast of the Assumption.

Canio, the head clown, eventually finds out that his wife is having an affair with another performer. When Nedda refuses to tell Canio the name of her lover, Canio stages a performance that mirrors the real-life conflict. It ends when Canio murders both his wife and her lover.

The opera was based on the true story of Gaetano Scavello, a tutor hired to curb the young Leoncavallo’s rebellious nature. Scavello became involved in a love triangle that ended when he confronted his beloved and a village shoemaker. Scavello was stabbed and killed, the shoemaker’s brother was arrested, and they would later be immortalized as operatic clowns. 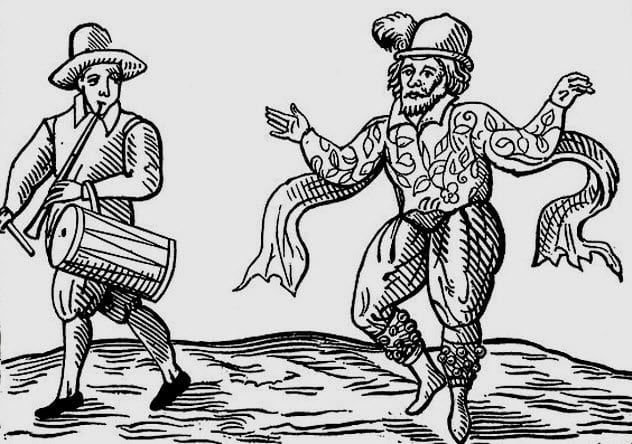 William Kemp was one of the most popular Elizabethan actors of his day. But his influence as a stage clown went to his head so much that Shakespeare likely wrote based on his antics.

Kemp was known for ad-libbing, and his tendency to go a bit off the rails was what made him so popular with audiences. Some scholars believe that bad blood between Kemp and Shakespeare—who was known to write based on the actors who would be performing—might have led Shakespeare to leave Falstaff out of Henry V despite promising earlier that Falstaff would return. When Hamlet says that clowns need to simply do and say what they are told, it is likely a reference to Kemp.

Kemp took his share of shots, too. After a 1598 stunt in which he morris-danced from London to Norwich, Kemp wrote a book about the experience. In it, he referred to the playwright as “Shakerags.” 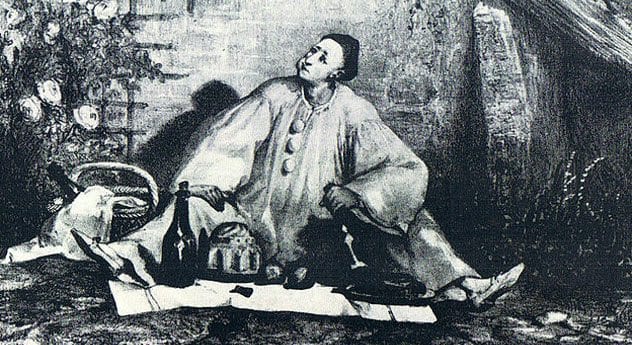 Jean-Gaspard Deburau was the man behind one of Paris’s most celebrated clowns, the white-faced and acrobatic Pierrot. Everyone from the nobility to the working class loved him, no matter what personality he decided to adopt for any particular performance.

But his career took the darkest turn possible when he was walking through the Paris streets and a child called out to him with the name of his stage persona. Deburau turned, raised his cane, and cracked the child on the skull so hard that the boy died instantly.

Deburau was ultimately acquitted of the murder. Although he never revealed what caused him to kill the child, his biographers suggested that Deburau had something of a dual personality. It was only as Pierrot that he was in control of his emotions and actions. When the makeup came off, the darkness came out. 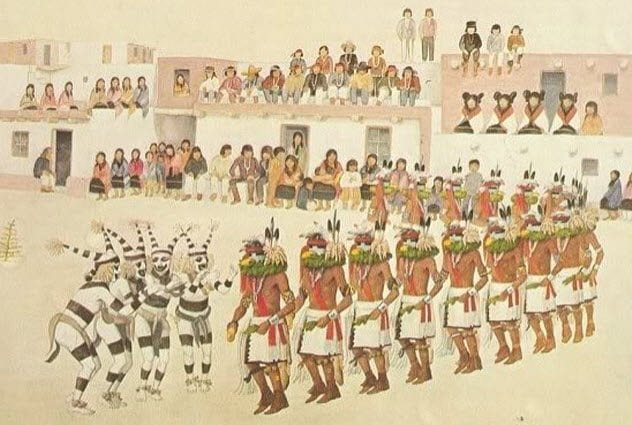 There are four types of Hopi clowns. Although each serves a distinct purpose, the contrary clowns remain a reminder of what waits for us all. At the same time, they divert evil by causing laughter.

Laughter has long been thought to be one of the most powerful weapons against evil and evil spirits. The Hopi contrary clowns get their laughs by acting in a manner completely opposite to the regular way of life.

They mock the most serious of problems faced by people on a daily basis, but their reversed language and actions are an interpretation of what waits for everyone in the underworld. Hopi beliefs say that everything in the afterlife is reversed, from day and night to cardinal directions. The clowns that carry out reversed behavior in the land of the living are in sync with the realm of the dead. 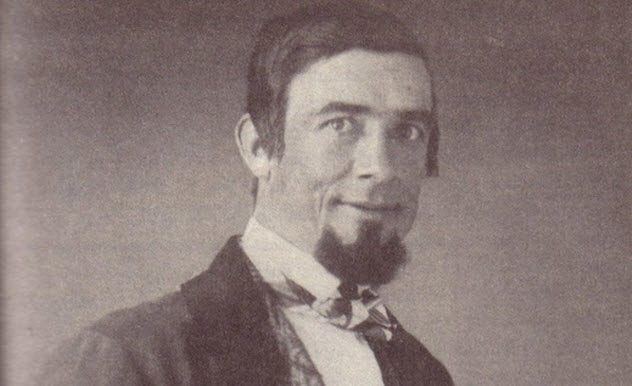 Among other things, Dan Rice claimed that he was Abraham Lincoln’s personal clown, that his patriotic clown suit inspired Uncle Sam, and that he was the inventor of pink lemonade. The truth is even stranger.

Rice was a clown at a time in US history when the circus was a distinctly family-unfriendly place. He branded himself the Great American Humorist and delivered scathing commentary on current events, especially the Civil War.

Rice used the mythos around his wit to run for the presidency. Even as Northern newspapers declared the native New Yorker a traitor to the North (his circus was based in Louisiana), Rice took a firmly abolitionist stance and went on to lead the Democratic ticket in votes.

He withdrew from the race after only a few months and was largely forgotten after he performed for and inspired a whole new group of circus performers: the Ringling Brothers.

10 Demons You Should Probably Try To Avoid