We don’t know entertainment. Sure, we have our TV shows and our movies, but we’re not living up to our potential because one little thing is holding us back: basic human morality.

In ancient Rome, they didn’t share our hang-ups over human rights. At the Colosseum and the Roman games, the Romans acted out every sadistic, twisted thought they could imagine—and turned it into first-rate entertainment.

10 Criminals On Seesaws Slaughtered By Animals 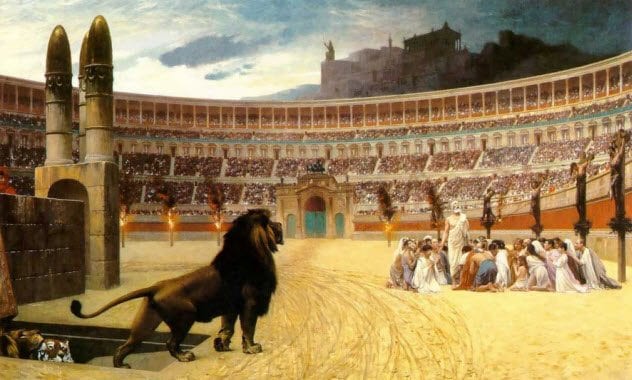 The people who organized the Roman games came up with some strange ideas. The weirdest one was probably a device called the petaurua. This was a gigantic seesaw that could lift people 5 meters (15 ft) into the air. Criminals were brought out naked with their hands tied behind their backs. They were placed on massive seesaws, where they could bounce each other into the sky like kids on a playground.

Then wild animals were released. The animals couldn’t reach the person on the top of the seesaw, so the criminals would desperately try to bounce the guy on the other side to the ground.

The audience placed bets on who would live longest, but nobody got out unscathed. As soon as your seesaw partner fled, you’d crash down to your doom.

9 Wild Animals Popping Out Of The Floor 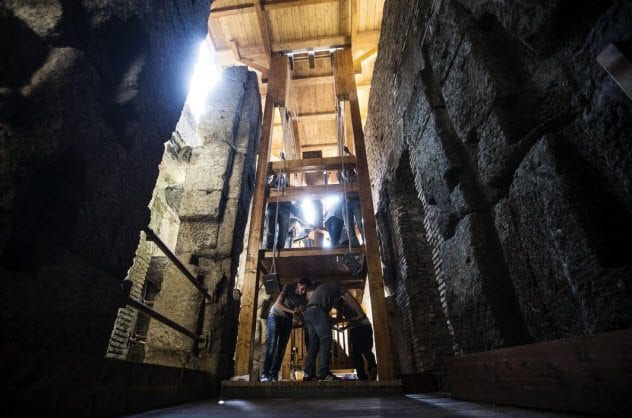 The animals released into the Colosseum didn’t come neatly out of cages. They would surprise you, popping out of the ground beneath your feet without a moment’s notice.

The Colosseum was littered with trapdoors, powered by a system of 24 lifts. These lifts were designed to carry 270 kilograms (600 lb) of weight because they had to lift massive, wild predators to the surface. Lions, wolves, leopards, and bears were all put into these things, ready to jump out at the condemned people above when they least expected it.

It took eight men to turn the wooden shaft that brought the animals out, and they had to do it perfectly. If things didn’t go as planned, the technicians were thrown into the Colosseum with the criminals. 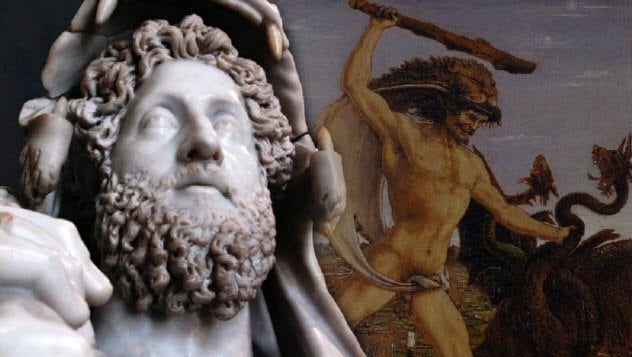 Emperor Commodus was a big fan of the games. Swept up by his love of the sport—and probably his debilitating mental illness—he would waltz into the arena himself, usually naked, and fight for the amusement of his people. Most of the time, the naked emperor slaughtered exotic animals like lions, ostriches, hippos, elephants, and giraffes in front of a crowd that was required to applaud.

Other times, he would fight people, although he wouldn’t kill them in the arena. He let them surrender. In private, though, Commodus murdered people for practice, getting ready for the games. Disgusted, his people plotted against him. In the bath one day, Commodus met a fitting end—strangled to death naked by his wrestling trainer.

7 Dwarfs Fighting Each Other With Meat Cleavers 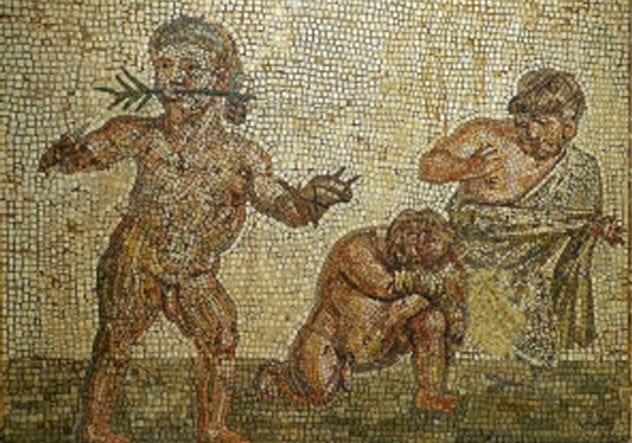 While Commodus was in power, it wasn’t just criminals who got sent to their deaths. Cripples and dwarfs were, too.

Commodus once gathered up every dwarf he could find and dragged them off to the Colosseum. There, each one was given a meat cleaver and set loose for the amusement of the crowd, forced to fight until the last man.

Another time, Commodus gathered up people who had lost their feet to disease and had them tied up in a row in the center of the arena. The emperor himself came out and walked down the line, bashing in their heads with a club.

6 Mythical Deaths Played Out On Stage 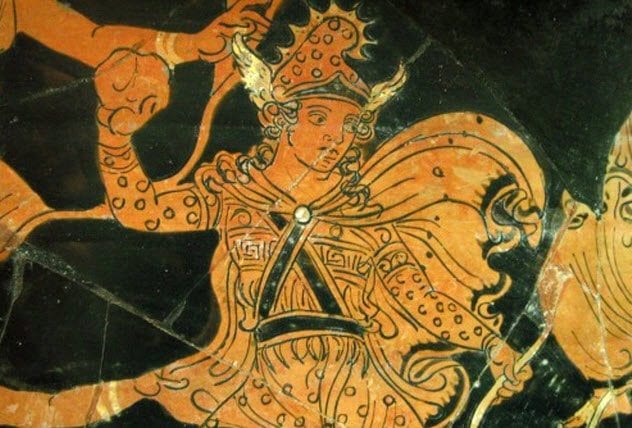 The myths of ancient Rome would be played out for an audience. These weren’t literary works performed by actors; they were massacres, with criminals playing the roles of the doomed.

One show played out the torture of Prometheus by having a criminal nailed to a cross with his stomach cut open. A bear was then released to finish him off.

Another criminal thought he got off easy. Cast as Orpheus taming the beasts, he was sent in with a lyre and ordered to play it for an arena full of animals. These were tame animals that wouldn’t hurt him—at first.

Watching a man walk around not getting murdered was too boring for the Roman audiences, so they deviated from the source material a bit. Halfway through the show, a starved bear was sent in to kill Orpheus.

5 Animals From Every Corner Of The World 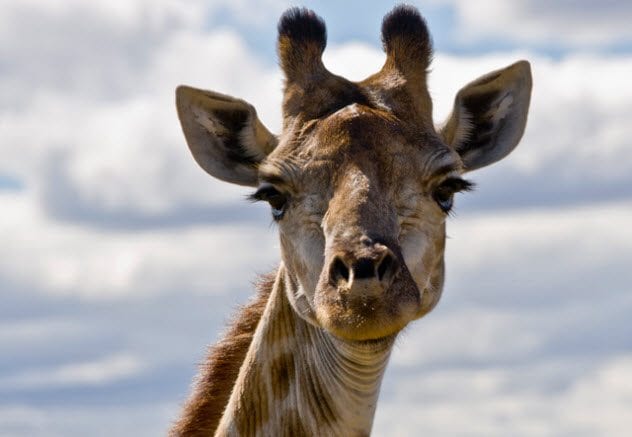 The games were the best place to see animals. The first giraffe ever to set foot in Europe was displayed there. It had been captured by Julius Caesar and was dragged into the arena with a chain around its neck. The crowd was impressed by its exoticness but not so much by the animal.

Of course, this was Rome, so just showing off animals wasn’t enough. Exotic animals—including elephants, rhinoceroses, hippos, and giraffes—were pitted against one another in combat. Other times, hunters would be set loose to slaughter the animals for the amusement of the crowd.

According to one source, Nero managed to get an elephant to walk on a tightrope for the delight of the audience, although we don’t know the technical details of how his people pulled it off.

So many animals from so many places were brought in that it created its own ecosystem. At least 684 unique species of plants have been found there, birthed from the droppings of animals from every corner of the globe. 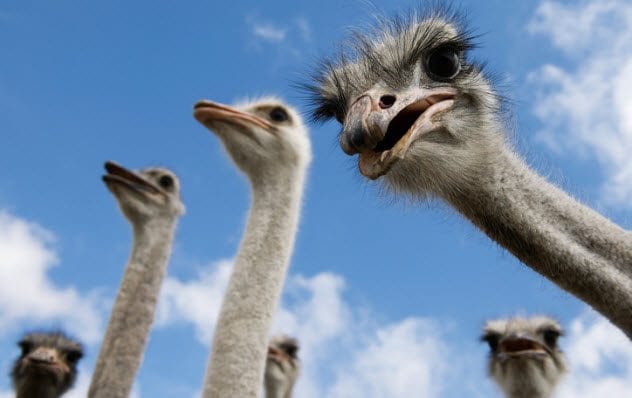 In AD 281, Emperor Probus had his people plant trees in the Circus Maximus until it looked like a forest. Then he invited the city to the circus for an event that would never be matched.

Instead of being stuck sitting in the bleachers, the people were invited to walk into the arena itself. There, a horde of herbivores was let loose. A thousand ostriches, a thousand stags, and a thousand boars were released into the crowd—along with a scattered slew of whatever animals they had on hand.

The entire audience was allowed to run wild with the animals, free to hunt them any way they chose—and they could take home whatever they killed.

3 Women Murdering Each Other 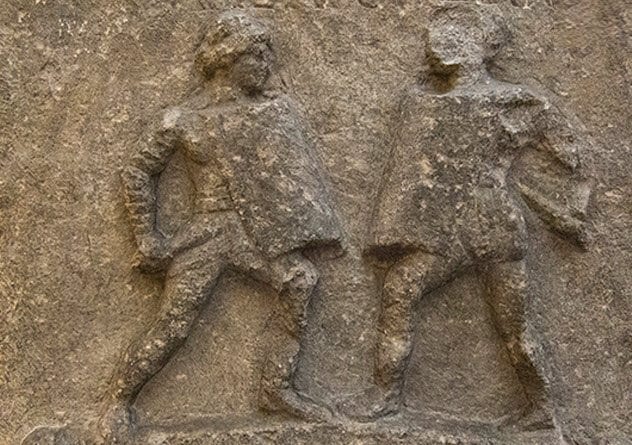 It wasn’t always just men in the arena—women were sent in, too. One show started with a woman dressed as Venus standing before Emperor Titus and declaring, “It is not enough that warrior Mars serves you in unconquered arms, Caesar. Venus herself serves you, too.”

This was more than just a ceremony; it was a signal to the audience. Today, they wouldn’t just see men beating each other senseless. They would see women kill each other, too.

Titus’s brother, Domitian, was really into the idea. When Domitian took over, he had more women fight than any other emperor. Unlike the men, these women were usually untrained, beating each other or being pitted against dwarfs in savage, desperate battles.

The men loved it. “What sense of shame can be found in a woman wearing a helmet,” one Roman wrote, “who shuns femininity and loves brute force!” 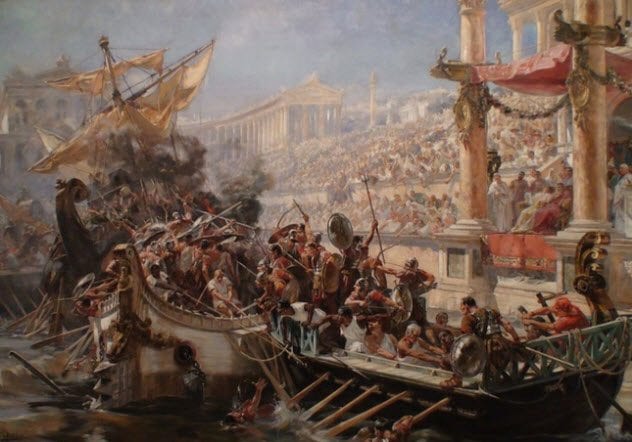 There are about four confirmed times in history when the Colosseum was filled with water to stage a full-scale naval battle. These were incredible technical displays. Crewed by condemned prisoners, full fleets of ships were put inside and would battle for the amusement of the crowds.

The first was staged by Julius Caesar, and it included 4,000 oarsmen and 2,000 fighters aboard full-size ships. It was so popular that people were trampled to death trying to get a good view.

That was just a small show, though. They got bigger and bigger until Claudius set the record by having 100 ships and 19,000 soldiers fight in a massive artificial sea.

His show almost didn’t happen. At first, the prisoners aboard the ships refused to fight. Claudius sent in his imperial guard to demonstrate exactly what would happen to the prisoners if they didn’t die for the entertainment of his audience. Then the show began.

1 A Prisoner Forcing A Lavatory Sponge Down His Throat 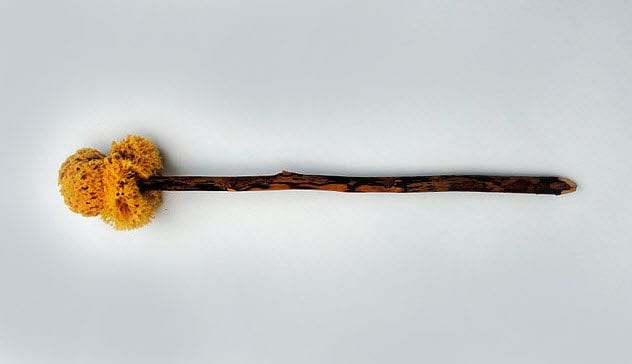 The prisoners weren’t too happy about being sent to death for the amusement of the Roman people. For many, going through these horrors was a fate worse than death—and some did everything they could to end their lives before they were forced onstage.

The night before they were to face the arena, one group of 29 Saxon prisoners took turns strangling one another to death, which was believed to be a mercy compared to the horrors of the Roman games. Another prisoner shoved his head between the spokes of a spinning cart wheel to snap his own neck.

The most extreme was a desperate German prisoner. With no other options, he grabbed the lavatory sponge from the communal toilet and thrust it down his throat, choking himself to death.

The Romans just saw it as another great extension of the games. Upon finding out about the suicide, the philosopher Seneca wrote, “What a brave fellow! He surely deserved to be allowed to choose his fate! How bravely he would have wielded a sword!”