With all of the seemingly endless options for amusement we have today, it’s easy to forget that this hasn’t been the case for very long. Before the Internet gave us immediate access to whatever we feel like watching, listening to, or reading at the moment, those who came before us could get up to some pretty weird things in pursuit of a good time. 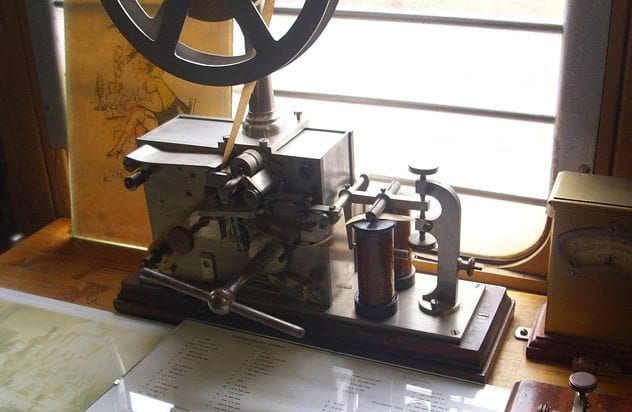 Practically as soon as the telegraph enabled instantaneous communication over hundreds of miles, local sports clubs in several major cities began using it to organize competitions with clubs in other states. For years, citizens could see scores posted in their local newspapers for the most recent telegraph sports matches.

The idea appears to have originated with bowling clubs and soon caught on, spreading to other sports. A 1905 issue of Shooting and Fishing magazine reported on the results of a telegraph shooting match between the Washington, D.C. Revolver Association and the Smith and Wesson Revolver Club of Springfield, Massachusetts. Telegraph bowling leagues in particular were very popular in the first two decades of the 20th century but largely died down by the 1920s. 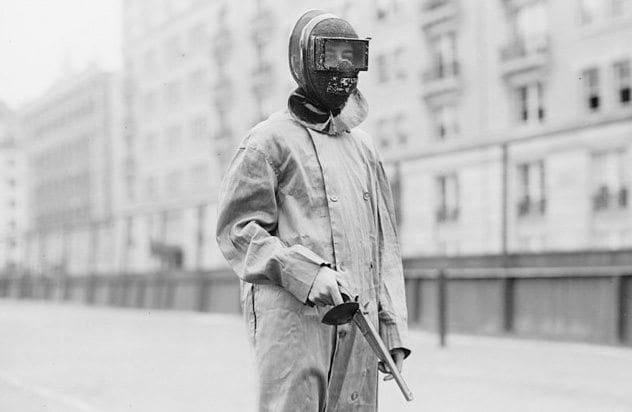 Dueling with pistols was still a popular, if prideful and lethal, pastime in America in the early 1900s. Especially in the South, taking up arms over petty slights was still seen as a way to potentially elevate one’s social status, and refusing a challenge to duel could make one a social pariah. But for a brief time, dueling became a spectator sport. Participants faced off wearing black robes and face masks, and used wax bullets.

The sport originated in France, with a “School of Dueling” being established in Paris. Wax bullet dueling was even featured in the 1908 Summer Olympics, with rules based on the honor codes of classic dueling. The duels were not completely without danger. The wax bullets could still cause some damage without proper protection, and spectators had to be wary of their eyes, as a stray hunk of wax could put one out. 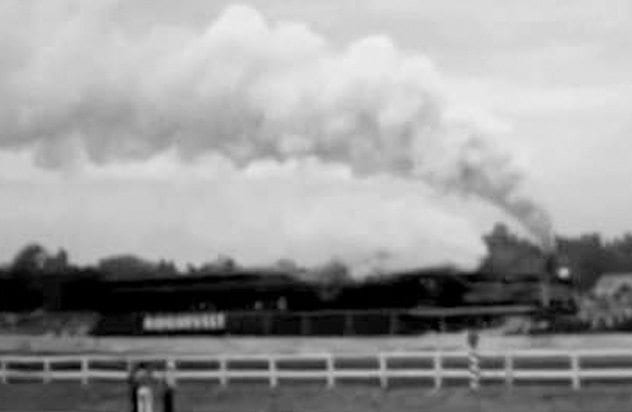 Humans have always been suckers for spectacle, from the Roman Colosseum to the latest Marvel film in IMAX 3-D. But in years past, spectacle could be hard to come by without putting oneself in danger. Enter “Head-On” Joe Connolly, perhaps the most famous promoter of the biggest events of their day: staged, head-on crashes between two locomotives.

Between 1896 and 1932, Connolly staged no less than 73 of these events, sending 146 trains to their fiery deaths. The first, and most infamous, of these staged wrecks ended in catastrophe. William George Crush, an executive with the Texas Railway Company, proposed the idea as a way to drum up ticket sales, and it took place outside a makeshift temporary city—“Crush, Texas”—in September 1896. Over 40,000 spectators showed up to watch, but the impact caused both trains’ boilers to explode, sending flaming debris raining down on the crowd. At least three died, and many more were injured. 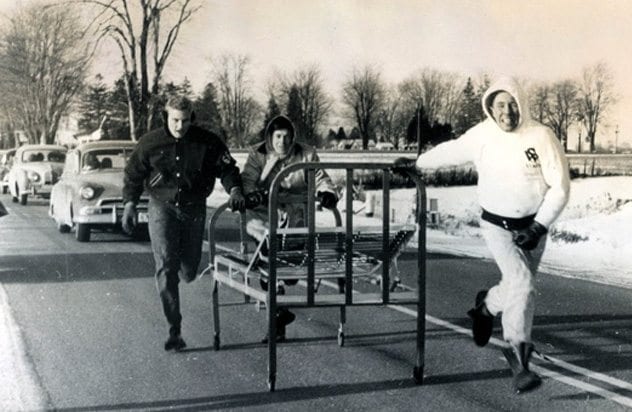 One strange campus craze, originating at the University of Rhodesia (now Zimbabwe) and quickly migrating to Canada, was reported on by Time in February 1961: bed pushing. That is, pushing full size beds mounted on wheels over long distances and difficult terrain.

Canadian students “from Nova Scotia to British Columbia” could be seen pushing beds anywhere and everywhere, “over highways, prairies and frozen lakes.” At the time, the record for distance was an incredible 1,600 kilometers (1,000 mi), set by an Ontario University team that “kept its Simmons rolling night and day for a week.” But the standing world record was set in 1979, years after the craze peaked, by students at Pennsylvania’s St. Vincent College. The team pushed their bed in circles around a shopping center for 3,000 kilometers (1,980 mi). 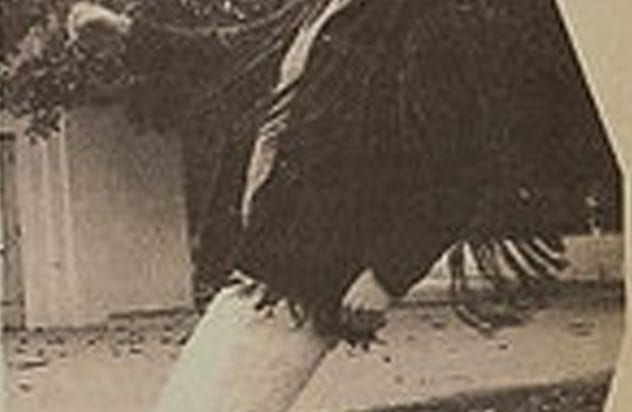 The phrase “Keep On Truckin’ ” originated with a Blind Boy Fuller blues song in the 1930s but seemed to really catch on the ’70s, when it seemed to appear on every other shirt practically overnight. It appears to simply be an innocent way to express that one should keep going no matter how difficult things become, but American college students—with some inspiration from artist Robert Crumb—turned the phrase into a strange and pointless activity.

Crumb’s comic strip, “Keep On Truckin’,” featured caricatures of men walking with a pronounced, exaggerated strut, leaning back while making wide, swooping leg motions. College kids—the strip’s target audience—took this immediately to heart, and began copying the cartoonish walk in real life. The phenomenon was first documented in campus newspapers in 1970 but died out by the mid-’70s. Perhaps this was because Crumb was finally granted a copyright for his original image, used without license on merchandise for years, in 1977.

In the 1920s, X-Rays were a strange and wonderful invention with a futuristic name. Scientists could hardly conceive of the potential; they could also hardly conceive of the potential dangers. This explains why, during that decade, X-Ray shoe fitting machines became all the rage in shoe stores across America—though they contained radioactive material, with no protection in place to keep this radiation from leaking into the atmosphere.

They were called “Shoe Fitting Flouroscopes,” and kids and adults alike loved them. By the early 1950s, there were over 10,000 of these extremely hazardous radioactive devices in department stores throughout the land. They were banned in the 1970s once the dangers became known, and while a few scattered cases of foot cancer in older patients have been linked to the machines, exactly how many may have been sickened will probably never be known. 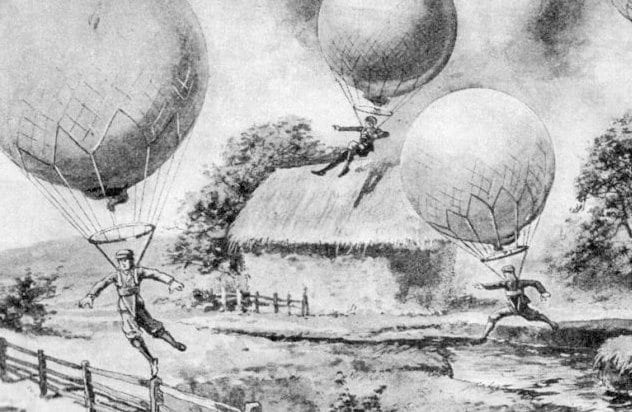 Yes, the 1920s loved futurism, and nothing was more futuristic than flight. Science fiction of the time was packed with flying cars and bizarre airships, and some rich sportsmen thought of a way to bring the future into the present: balloon jumping.

The jumper was attached by a harness to a large balloon, large enough to provide some lift but not so large (ideally) that the jumper would drift off into the sky. Participants could achieve a kind of moonwalk-type bounce, flying up over trees, fences, and even houses. Sports publications throughout the 1920s fawned over this new sport, calling it safe, easy, and fun, but it never quite caught on among the public at large—perhaps due to a 1927 balloon jumping death in the UK, in which an experienced parachute jumper died while partaking in the activity. 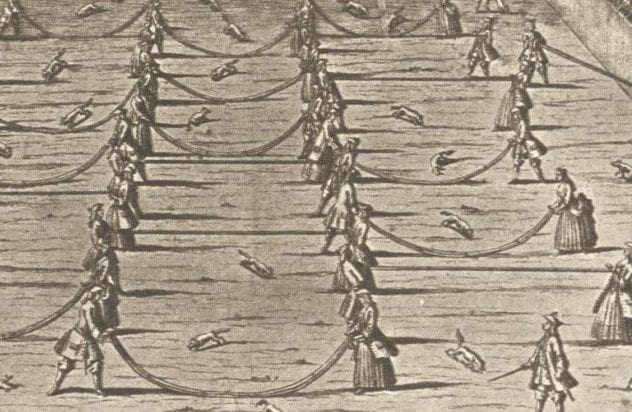 Going back much further, once can imagine that the opportunities for amusement were even more scarce in the 18th century. One forgotten sport, described in a German hunting manual from 1720, was known as “Fuchsprellen”—roughly translated, “Fox Tossing.”

The idea was to lay a series of tarps over a large outdoor playing area. Then, several foxes—along with badgers and small wildcats—would be let loose. Participants would chase them around, waiting for the moment when a hapless animal was positioned perfectly on one of the tarps; two players would then grab the tarp at either end and quickly pull it taut, launching the animal as high into the air as possible.

While one might think that such ridiculous activities involving cruelty to animals are a thing of the distant past, this is not necessarily so. 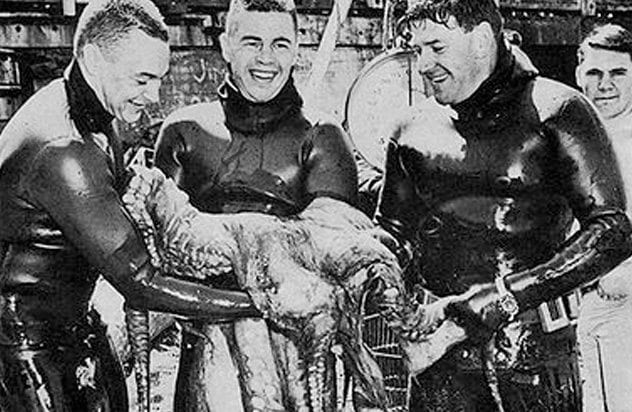 In the 1950s and ’60s, skin diving was a popular pastime. It was quite competitive, with divers vying to see who could dive the deepest or stay submerged the longest, but soon enough a new element was added to the competition: how large an octopus could be wrangled to the surface.

While incredibly illegal today, octopus wrestling became a popular spectator sport in the Pacific Northwest. Competitors had to find and extract an octopus from its lair and wrestle it to the surface of the water; they were judged on the weight of the animal, with extra points awarded for forgoing any breathing equipment. In 1963, over 5,000 spectators showed up to Puget Sound in Washington State for the World Octopus Wrestling Championships. Organizers guaranteed action by placing a few octopi in strategic locations along the beach, as they had to ensure an exciting match; the event was being televised. 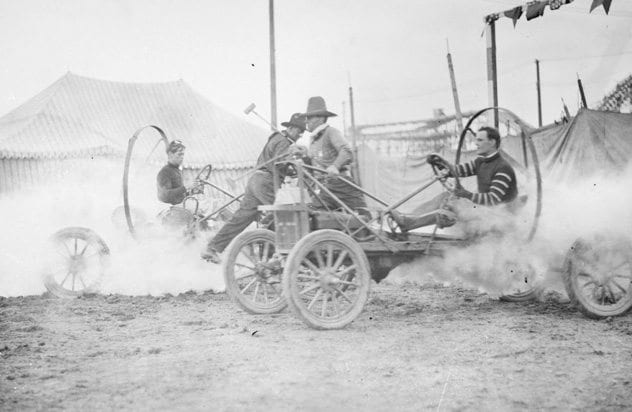 In 1912, a Kansas Ford dealer held what he hoped would be the first of many sporting matches with an eye toward generating business. It was held between the two inaugural teams, the Grey Ghosts and the Red Devils, of America’s newest sport: Auto Polo. It was played pretty much exactly as one might expect, like traditional polo but with cars instead of horses.

As cars were initially marketed as a replacement for horses, this makes a strange sort of sense. In this first match, held in a Kansas alfalfa field, two teams of three men competed: two men to drive the car and one to swing a giant mallet at a basketball-sized rubber ball. Despite (or perhaps because of) the likelihood of crashes, injuries and deaths, the sport skyrocketed in popularity for the next several decades, with the last matches taking place in the mid-1950s.