Nearly every city is built over an ancient site. The older the city, the greater the past that lies beneath. Sometimes, archaeologists find amazing things because they know where to look or doggedly followed rumors. But when it comes to rediscovering hidden history, most finds happen by accident. Unexpected treasure is the best. 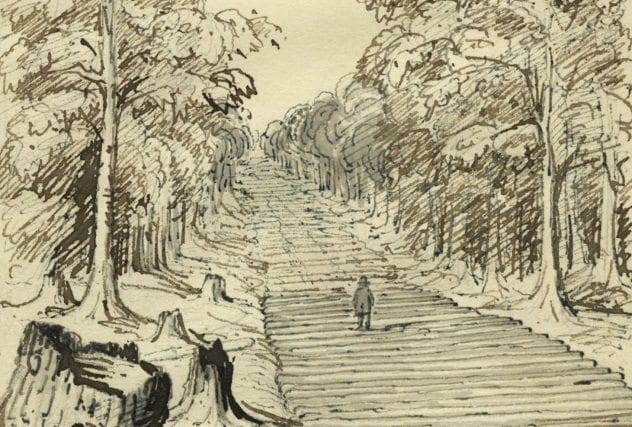 Under King Street in Waterloo, Ontario, runs a much older version of a road. The historic find was made in 2016 by a construction crew, which had been forewarned of a possible encounter with something resembling a row of logs. When that happened, they called in the archaeologists, who confirmed the discovery: It was a corduroy road dating from the time of the area’s earliest development.

Corduroy roads were constructed by placing logs across a path to ease passage across swamps or similar wagon-challenged areas. The one unearthed in Waterloo was probably built before 1877. Settlers used sand and packed the tree trunks tightly. While it made the crossing quicker and free of concern for becoming stuck in the mud, cart horses still faced injuries due to shifting logs. The partial path shows signs of extended use as well as diligent maintenance by the pioneers who used it. 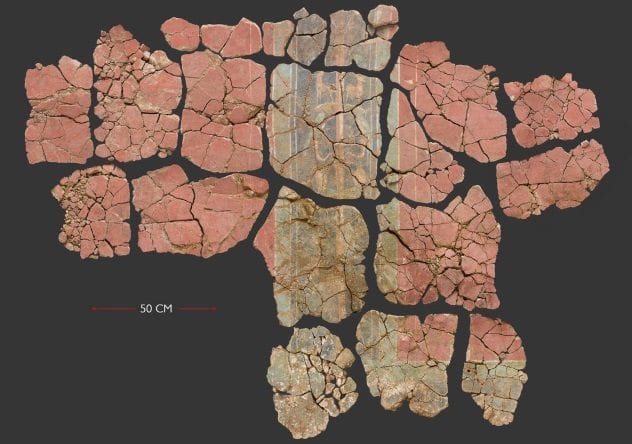 In 2016, a treasure was ironically discovered by the Museum of London Archaeology while scouting for a new office building. Found underneath 21 Lime Street was a large piece of wall, 2.4 meters (8 ft) long and 1.5 meters (5 ft) high. Archaeologists turned the facedown slab over and were stunned to find it was an elaborate, hand-painted fresco from Roman days. The artifact was almost 2,000 years old and showed a delicate nature scene mixed with some domesticity: feeding deer, trees, and birds as well as fruit and a vine-like plant growing around a candelabrum.

The fresco’s pigments were obtained from Spain, an extremely difficult thing to do in those days. This added to the museum experts’ conviction that the art piece had been commissioned by an elite family who spared no expense and possibly showed it off (and just how wealthy and fashionable they were) in their reception area. 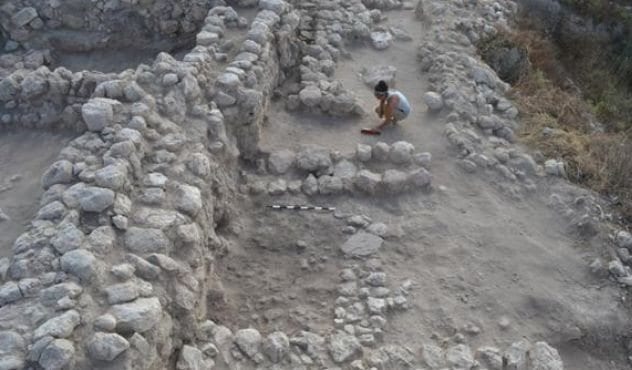 During Biblical times, the Canaanite city of Gezer was a popular place to lay siege to. Whoever controlled Gezer owned the wealthy vein of the east-west trade route. The well-known archaeological site has been studied for decades but received an extra dimension in 2013: It’s sitting on another city.

Previously, layers beneath Gezer dated back to the tenth to eighth centuries BC, but the unknown second settlement proved to be far more ancient. The 14th-century-BC ruins most likely belonged to another Canaanite city, but it had some Egyptian flavor. Artifacts included a scarab amulet of Amenhotep III, better known to the world as the grandfather of Tutankhamun. Important Biblical-era cities are usually older than their official ages, but the Late Bronze Age roots of Gezer surpassed by far even that expectation. 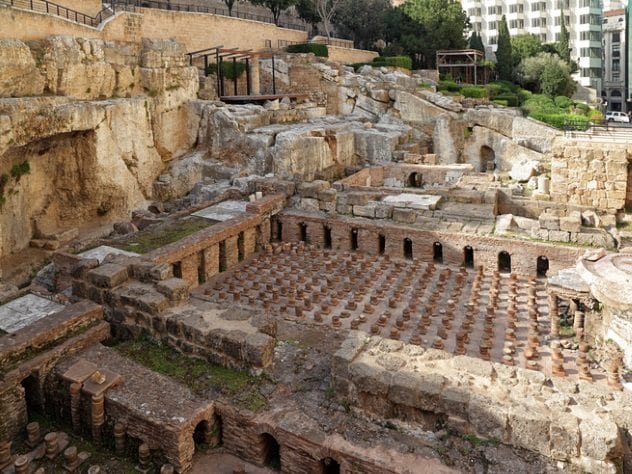 While Gezer covered up one city, Beirut stands on several. For 5,000 years, Canaanite, Phoenician, Hellenistic, Roman, and Ottoman civilizations rose one after the other, adding their own influences to this archaeological smorgasbord. The incredible time line came to light during excavations in central Beirut, meant to rebuild the city after its devastating civil war.

Among the finds were Roman ruins, including the city’s cardo maximus (main north-south street), quarters belonging to the Phoenician and Hellenistic cultures, a Canaanite mound, and a Byzantine trading place. One of the most incredible recoveries was a collection of mosaics. Placed side by side, they create a massive, 8,200-meter-long (27,000 ft) stretch of art. It was already believed that Beirut originated around 3000 BC, but this proved it. 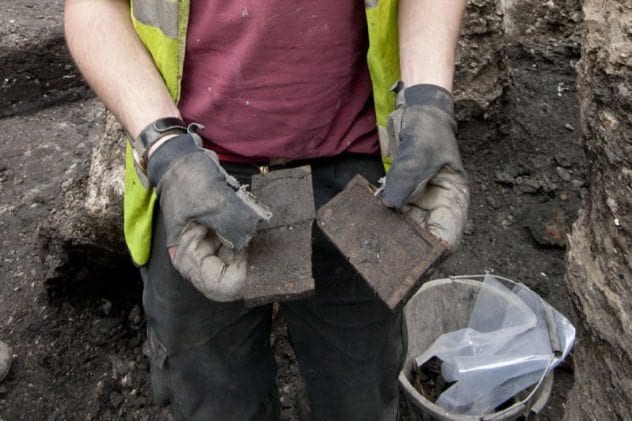 Britain’s oldest scribbles may reveal many firsts. In 2016, a cache of 405 wooden writing tablets were found beneath an underground river in the middle of London. These rare Roman communications were etched between AD 43 and AD 80, making them the earliest writing unearthed in the UK. Dating back to the year the Romans invaded Britain, the Latin phrases give new insights into London’s first community, a city that was erected by the invaders.

There’s a colorful plea for a loan, while another plank dishes out peppery business advice to someone a little too free with handing out loans. The first-ever written mention of London’s name, the country’s first IOU, and a tablet from perhaps the first school, with letters running the alphabet, were also found. Soldiers, judges, and businessmen all left messages behind that will now help researchers to better understand this early urban society. 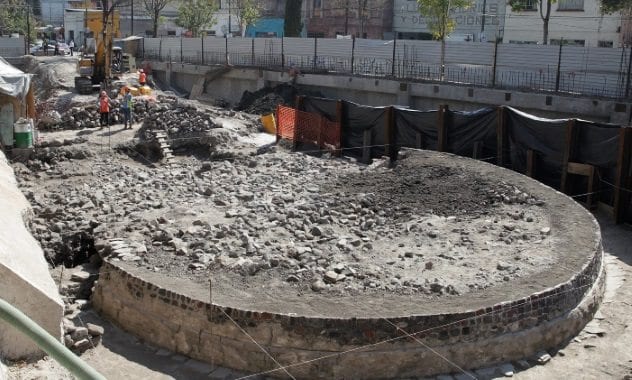 In Mexico City, archaeologists didn’t bat an eyelid when ancient pottery and eight human skeletons were found beneath a supermarket in 2016. What excited them, though, was the unexpected sight of a temple. For years, shoppers remained unaware that beneath their feet slept a sacred site dedicated to the Mexica-Tlatelolca people’s wind deity, Ehecatl-Quetzalcoatl. It won’t match the grandeur of other ancient temples of the world, but it remains a remarkable find.

The temple is basically a round platform, 1.2 meters (4 ft) high and 11 meters (36 ft) in diameter, with most of its original white stucco undamaged. To honor their god, priests of the pre-Hispanic city of Tlatelolco left gifts: bird parts, such as bones and duck bills, statues of monkeys, obsidian, cactus spines, and even a human baby. The 650-year-old platform is in the middle of a mall development scheme but will be preserved so visitors can view it. 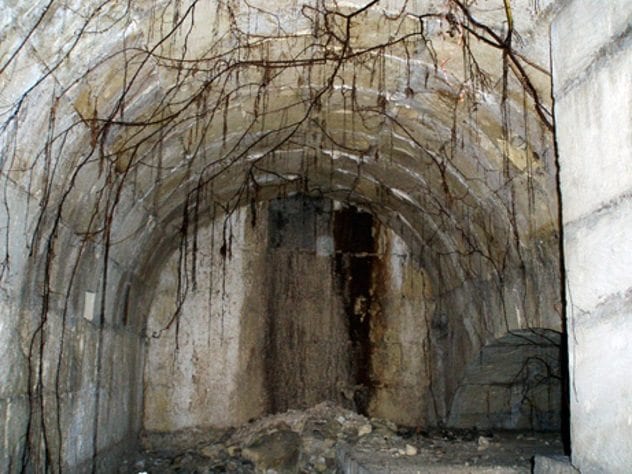 The Mediterranean island of Malta holds a subterranean secret. For centuries, it was claimed that the Knights of Malta, a Christian military order, constructed an elaborate underground complex while fighting Muslim forces on Malta. In 2009, construction surveyors found tunnels beneath the capital of Valletta. The network dates to the 16th and 17th centuries, when the order occupied the island.

Experts believe the tunnels are a plumbing system that blessed the embattled Valletta with fresh drinking water and a sewage system light-years ahead of its time. The well-built passages, containing centuries-old metal valves and pipes, are wide enough for a person and allowed the knights easy access to do maintenance. Other rumors, such as secret carriageways and an entire underground Valletta, are, according to archaeologists, not impossible but still lack evidence. 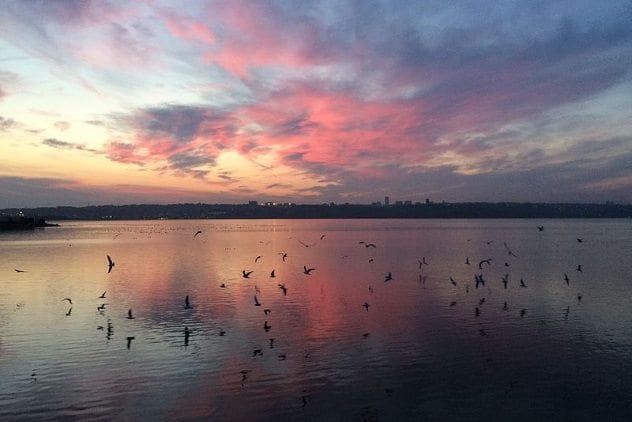 In 2007, drought had evaporated much of Lake Kucukcekmece in Turkey. Archaeologists zoomed in when the exposed shores promised a slice of history, and they weren’t disappointed. They soon uncovered a large-scale medicine factory. Tools like mortars and pestles, cooking pots, spatulas, and medical devices surfaced. What confirmed the nature of the site was a haul of 700 vials. Each contained a remedy of some sort. Two were analyzed and turned out to be 1,400-year-old drugs for depression and heart ailments.

The vials represent the largest stockpile of ancient medicine and were recovered from the burned remains of the factory along with the preparation tools. The destruction is the first indication that a suspected onslaught in AD 646 by Istanbul’s enemy, the Avar Empire, did occur. More artifacts could be in the lake’s remaining waters, but nuclear and industrial pollution makes exploration too risky. 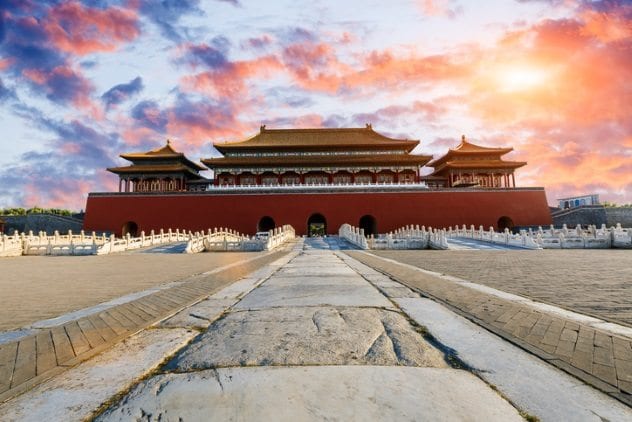 Chinese historians suspected Kublai Khan’s palace once stood near the current location of Beijing’s Forbidden City. Historically speaking, the palace has always been a sought-after prize. In 2015, during maintenance efforts in the Forbidden City, tile and porcelain fragments from the Yuan dynasty (1271–1368) were discovered. This drew immediate scientific attention because the tiles were from the era during which Khan ruled China. No longer did researchers look for the long-missing Mongol conqueror’s palace in the vicinity of the Forbidden City but rather directly beneath it.

Digging deeper, the foundations of the dynasties that followed, the Ming and Qing, came to light. Archaeologists now believe that the Ming dynasty tore down every brick of Kublai Khan’s royal buildings and constructed the famous gardens and palaces of the Forbidden City over it. 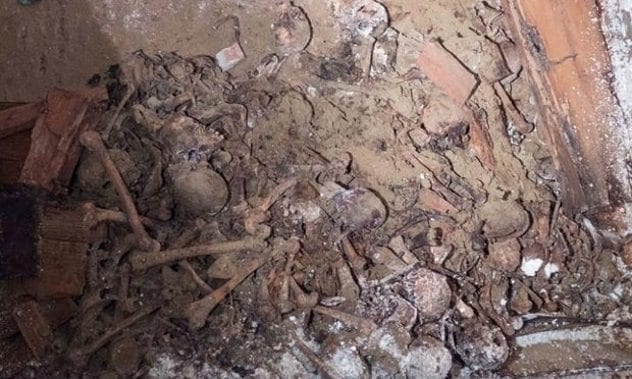 Photo credit: New York City Department of Design and Construction via The Guardian

In 1965, an electricity company stumbled upon an underground tomb. Due to bad record-keeping, the location of the skeleton-stuffed vault disappeared. Then, in 2015, during an excavation to switch a 100-year-old water main under Washington Square Park, the gory resting place revealed itself once more. This time, it came with a surprise: a twin vault nearby.

Washington Square Park used to be a grave site. After the Civil War, society’s unwanted received unmarked graves, and the dead from a yellow fever epidemic were once buried there. The twin vaults could belong to the 18th-century Cedar Street Presbyterian Church, but they kept no records, so even that remains uncertain.