I made this list in order to clear up some misconceptions people had about the Confederacy. This is not a comprehensive list of facts about the Confederacy; I picked a few that I thought most people wouldn’t be familiar with. Overall, I intended for this to be a fun and informative list, and not to start a North versus South debate. 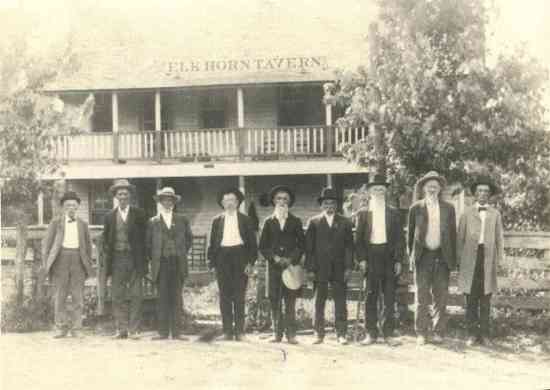 Union troops were primarily city and town dwellers. They named battles after natural objects near the scene of the conflict. Confederate troops were, chiefly, from the country and named battles after impressive artificial (man-made) objects near the scene of the conflict. The battle of “1st Manassas / Bull Run”: The Union army named the battle “Bull Run” after a little stream near the scene, called Bull Run, and the Confederate army named the battle “Manassas” because of the Manassas railroad station located nearby. There were at least 230 actions that were known to have more than one name. In “Ball’s Bluff / Leesburg”- The Union troops noted the steep 100-foot-high bank rising above the Potomac on the Virginia shore, and the Confederate army noted the nearby city of Leesburg, Virginia. “Pea Ridge / Elkhorn Tavern”: Elkhorn was a nearby tavern and Pea Ridge was the name of a crest of the Ozark’s Ridge. 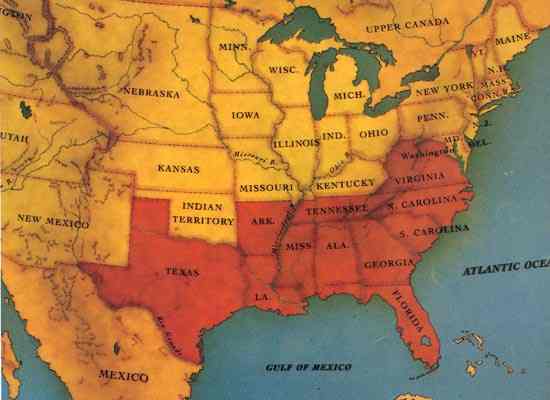 The states included in the Confederacy were: (in order of secession) South Carolina, Mississippi, Florida, Alabama, Georgia, Louisiana, Texas, Virginia, Arkansas, North Carolina and Tennessee. Geography proved an overall advantage in the south. The Confederacy spread over more than 750,000 square miles (1,942,500 square km), much of it beyond the reach of good roads or rail lines. The Confederate States of America claimed a 3,500-mile (5,630km) coastline, and contained nearly 200 harbors and navigable river mouths. Most of the interior portion consisted of arable farmland, though much was also hilly and mountainous, and the far western territories were deserts. The highest point (excluding Arizona and New Mexico) was Guadalupe Peak in Texas, at 8,750 feet (2,667 m). Texas shared an open border with Mexico – features that rendered a truly crippling Union blockade nearly impossible. 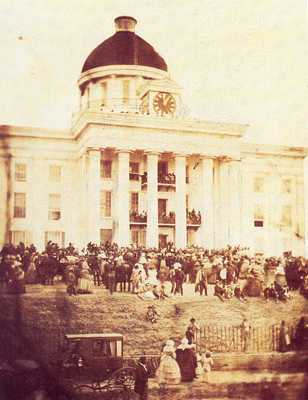 At a convention in Montgomery, Alabama, the seven seceding states created the Confederate Constitution, a document similar to the United States Constitution, but with greater stress on the autonomy of each state. Jefferson Davis was named provisional president of the Confederacy until elections could be held. The Alabama State Capitol served as the capitol of the Confederate States of America until May 26, 1861, when the capital was relocated to Richmond, Virginia, as part of the deal to get Virginia to secede from the Union. In August, 1861, President Davis and his young family moved into the White House of the Confederacy, in Richmond. The house was abandoned during the evacuation of Richmond on April 2, 1865. The capital was then moved to Danville, Virginia. The city was the seat of the Confederate government for only eight days, April 3-10, 1865.

Confederate money began to be circulated in April, 1861. Throughout the next 4 years, approximately $1.7 billion worth of currency was issued. Most of the Confederate money was made using offset printing and lithographic processing because there were few skilled engravers in the South. Confederate money featured a number of unique images such as: mythological gods, African-American slaves and naval ships. One bank note did feature George Washington. Due to Union embargoes, precious metals were difficult to come by in the South. This was also impacted by the fact that most of the general metals were being used in the war effort. Despite this, the Confederacy was able to produce a one cent piece and a half dollar. After the war, much of the paper currency was destroyed. Only a few examples of Confederate currency still exist, making it highly valuable.

6
First and Only President 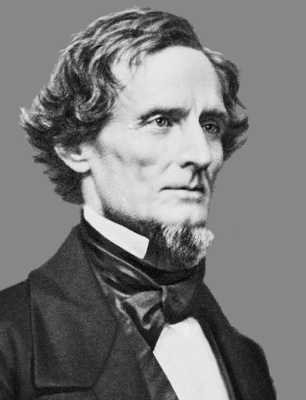 Jefferson Davis (June 3, 1801- December 6, 1889) was a West Point graduate who had commanded a regiment in the war with Mexico, and later served as Secretary of War. He took his oath as provisional president on February 18, 1861, in Montgomery, Alabama. He became the constitutional president on March 11, 1861, in Richmond, Virginia. Unlike the United States, which allowed for indefinite re-election (until the passage of the 22nd Amendment in 1951) of both the President and Vice President after a four-year term, the Confederacy gave these offices six year terms, but the President could not be re-elected.

His presidency ended May 5, 1865. On May 10, 1865, federal troops captured him at Irwinville, Georgia. From 1865 to 1867 he was imprisoned at Fortress Monroe, Virginia. Davis was indicted for treason in 1866, but the next year was released on a bond of $100,000, signed by the American newspaper publisher Horace Greeley and other influential Northerners. In 1868, the federal government dropped the case against him. His grave is in Richmond, Virginia. 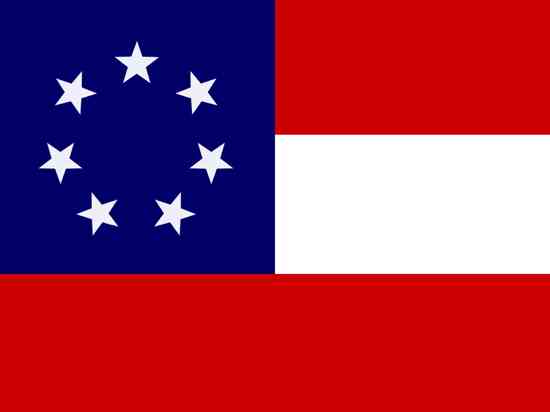 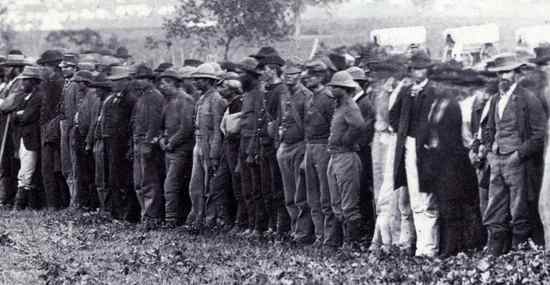 Both the Confederacy and the Union had horrid prisons, which produced retched, disease-ridden and emaciated prisoners. Neither side deliberately set out to maltreat prisoners, but prisons set up in haste were often without proper shelter and soon took in twice the amount of prisoners they were designed to contain. Arrangements were made hurriedly to deal with unexpected masses of men. The first government-sanctioned exchanges took place in February, 1862, but it was not until July 22, that a formal cartel detailing the exchange system was agreed to by the two governments. Under this agreement, all prisoners were to be released – either exchanged or paroled – within 10 days of capture. Though the North refused to allow regular exchanges to take place, sporadic limited exchanges occurred. 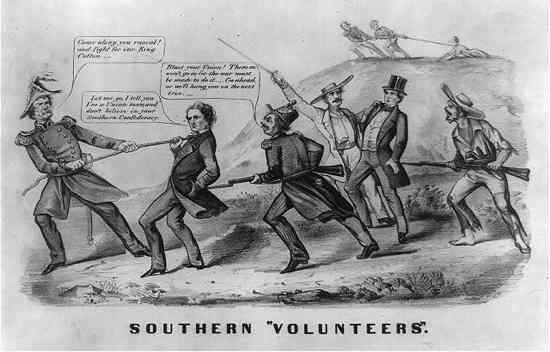 The first general American military draft was enacted by the Confederate government on April 16, 1862, more than a year before the federal government did the same. The compulsory draft was viewed as a violation of the people’s rights, which is the very reason they went to war in the first place. Under the Conscription Act, all white men between 18 and 35 were liable for a three year term of service. The Act also extended the terms of service for one-year soldiers to three years. In September, 1862, the age limit was raised to 45. Men who worked as druggists, civil officials, railroad or river workers, telegraph operators, or teachers were exempt. 92% of all exemptions came from North Carolina and Georgia – mostly through fraud. 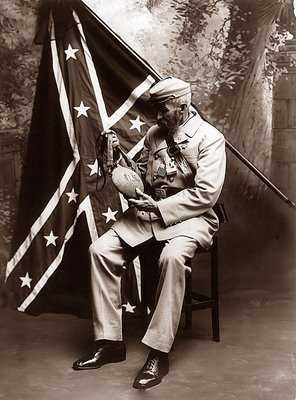 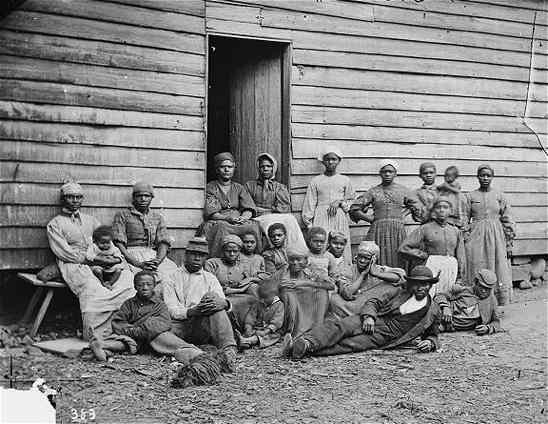 In 1864, the Confederate States began to abandon slavery. There are some indications that even without a war, the Confederacy would have ended slavery. Most historians believe that the Confederacy only started to abandon slavery once their defeat was imminent. If that were true then we are to believe that the CSA wanted independence more than they wanted to hold on to slavery. The CSA’s highest ranking generals, Robert E. Lee and Joseph E. Johnston were not slave holders and did not believe in slavery. And according to an 1860 census, only 31% of families owned slaves. 75% of families that owned slaves owned less than 10 and often worked beside them in the fields. The Confederate Constitution banned the overseas slave trade, and permitted Confederate states to abolish slavery within their borders if they wanted to do so. Slavery wasn’t abolished until 1868, 3 years after the war. Thus Kentucky, Missouri, Maryland and Delaware still had slaves.