Burning alive is just about the worst way to go. Used as a homicide technique, it is downright diabolical. This extreme extermination tactic is almost always political. Burning adversaries alive makes a point. Perversely, often those who commit these most grisly of murders believe they are justified—if not sanctified. 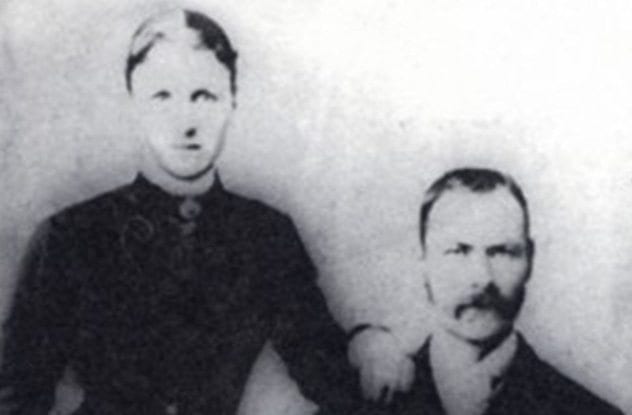 On March 15, 1895, Bridget Cleary’s husband set her on fire, believing she was a changeling. The dressmaker and egg seller had been bedridden for days and “seemed to be wild and deranged” when Michael Cleary force-fed her herbs and held her over the embers of the kitchen fire in a sitting position. Bridget’s body was discovered in a shallow grave. 10 individuals were arrested from the brutal murder—including her mother, father, and brother.

According to witness Joanna Burke, “She was burning on the hearth. The house was full of smoke and smell. When I looked down to the kitchen I saw the remains of Bridget Cleary, laying on a sheet.” But Michael insisted. “It is not Bridget I’m burning. You will soon see her go up the chimney.” According to Irish lore, once the changeling died, the loved one it replaced would return, riding a white horse. 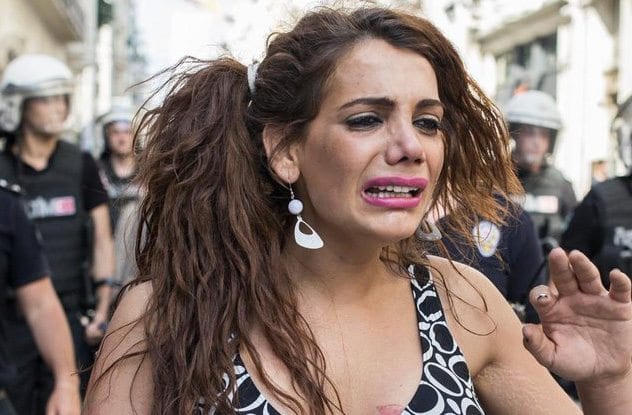 In August 2016, Turkish authorities discovered the charred and mutilated remains of transgender activist Hande Kader in a forest on the outskirts of Istanbul. She had been burned alive. Investigators established Kader’s identity through prosthetics on the body. A sex worker, Kader, 23, was last seen getting into a client’s car. Her partner filed a missing persons report when she failed to return. The autopsy revealed she had been raped and tortured before being set ablaze.

According to Transgender Europe, Turkey surpasses all European nations in transgender murders. Turkish transgender sex workers explain the dangers of their profession: “There are very few trans individuals who die of natural causes—nearly none.” While homosexuality is legal in Turkey, there is tremendous political and social pressure. Kader had become known to millions for her resistance against militant police during the Istanbul Pride Parade, which was suppressed using pepper spray, water cannons, and non-lethal bullets. 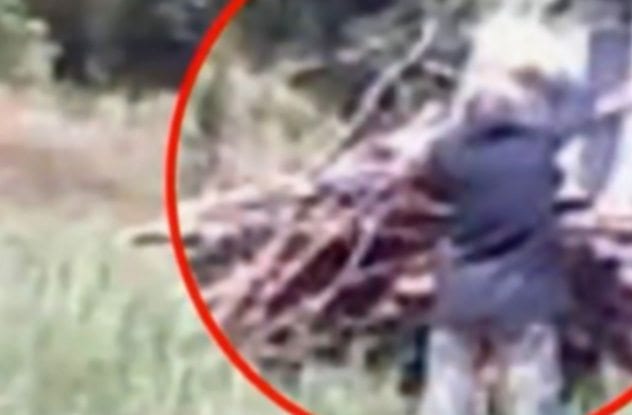 On September 20, 2016, the Shiringamazu Alto community of the Peruvian Amazon burned alive a 73-year-old woman accused of witchcraft. Rosa Villar Jarionca had been sentenced to death for spreading pestilence through sorcery. Cell phone footage reveals Jarionca tied to a woodpile, drenched in gasoline, and set ablaze. The pyre burned for three days. Police recovered scattered bones among the ash.

The Shiringamazu Alto community kept detailed records of Jarionca’s trial. A majority vote condemned her. Her execution served “as an example to the community and other communities against this type of damage.” Prosecutor Hugo Mauricio of the Puerto Bermudez region indicates that witchcraft accusations are common among the 300 indigenous groups within the territory. The remote area is far from the reach of the Peruvian government, with limited access to justice, health, and education. In 2015, a nearby pregnant woman was charged with witchcraft and beaten until she miscarried.

In May 2016, Venezuelan vigilantes burned a thief alive over the equivalent of $5. Roberto Bernal, 43, was beaten until semi-conscious, doused in gasoline, and set ablaze. He died two days later. An older man had accused Bernal of pickpocketing him. Many members of the mob were uncertain of Bernal’s guilt but were wary of wallet, cell phone, and motorcycle thefts. According to 29-year-old Eduardo Mijares, “We wanted to teach this man a lesson. We are tired of being robbed every time we go into the street.”

Only one of the vigilantes has been brought to justice. Maickol Jaimez Veroes has been charged with premeditated homicide and arson. Captured on video, Bernal’s slaughter highlighted the growing problem of mob justice in the crisis-plagued country. The number of vigilante cases being investigated by the Venezuela’s attorney general skyrocketed to 74 by May 2016, from a mere two incidents in 2015. 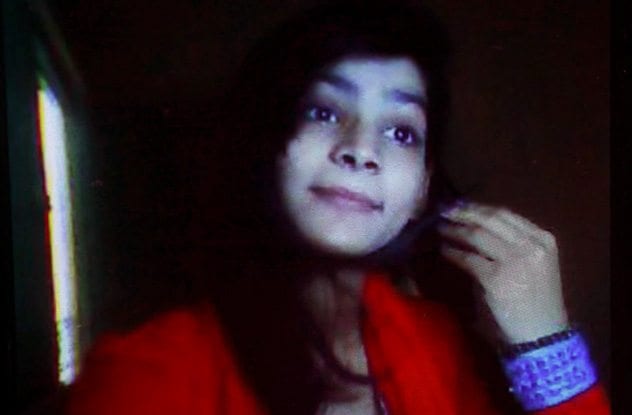 Earlier this month, a Pakistani court sentenced a mother to death for burning her daughter alive. Parveen Bibi brutally murdered her 18-year-old daughter Zeenat Rafiq one week after her marriage. Bibi lured her daughter back with promises of a party. Instead, she burned Rafiq alive. Neighbors heard screams, but were prevented from entering by the victim’s family. Police discovered Rafiq’s remains slumped near the staircase. The autopsy revealed evidence of beating and strangulation in addition to extreme charring.

According to Rafiq’s husband, Hassan Khan, they had been in love since their school days, but her family rejected his proposals, forcing them to elope. Rafiq was deeply concerned, and only agreed to return under the ruse of the celebration. Upon sentencing, her murderous mother coldly stated, “I don’t have any regrets.” Rafiq’s brother, Anees, was sentenced to life in prison for his involvement. His lawyer protests, insisting Anees had no involvement. 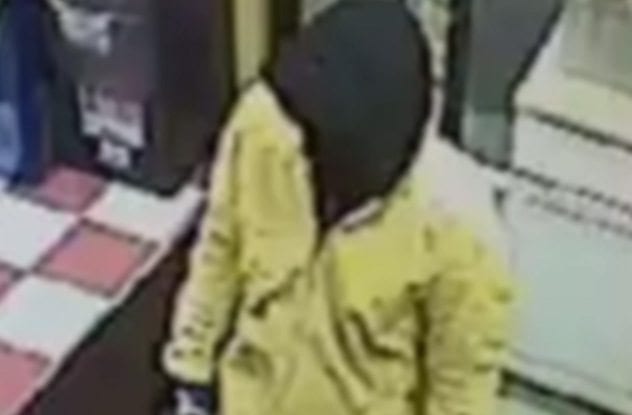 In December 2016, a man dressed in yellow rain gear walked into the Rocky Legdge Shell station, doused it and the clerk in flammable liquid, and set the store ablaze before disappearing on a bicycle. Security cameras captured the whole incident, which took only 15 seconds. The 54-year-old clerk, David Wicks, later died of his injuries. He was unable to speak but could nod yes or no. When authorities asked if the assailant was targeting him specifically, he nodded “yes.”

CCTV footage shows a man wearing yellow rain gear, a black hood, and black gloves. Authorities discovered an abandoned beach cruiser bicycle four blocks away from the gas station. It matches a description of the vehicle the assailant used to flee. The motive remains a mystery. Secret Witness of Shasta County is offering a $10,000 reward for information leading to the arrest and conviction of Wick’s murderer. 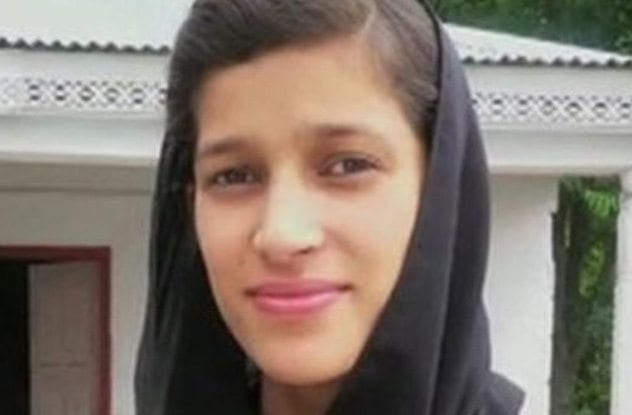 In June 2016, a teacher was burned to death for refusing a marriage proposal to her principal’s son in the resort town of Murree, Pakistan. 21-year-old Maria Sadaqat was doused with kerosene and set ablaze. Burns covered 82 percent of the teacher’s body. It took three days for her to die. Before succumbing to her injuries at an Islamabad hosptial, Maria Sadaqat indicated that her boss, Shaukat, and four men entered her home and accused her of sleeping with Shaukat’s married son before brutally attacking her.

According to Sadaqat’s aunt, trouble began when she refused the marriage proposal to Shaukat’s six months before the attack. His son was already married with a child. An initial report by the Punjab police stated that Sadaqat had self-immolated after having a dispute with her principal’s son, Haroon. Attacks on women who refuse marriage proposal are common in Pakistan. 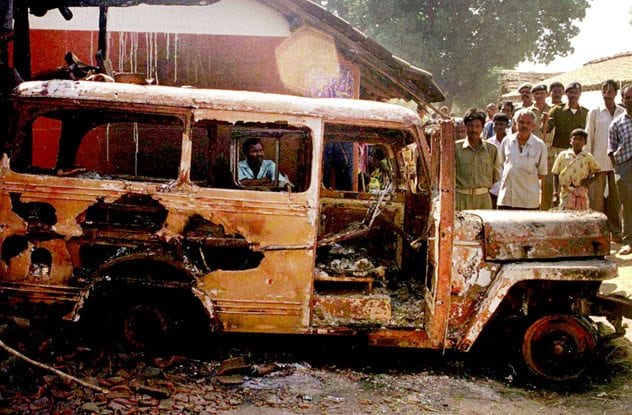 On January 23, 1999, Hindu extremists burned an Australian missionary to death along with his two sons in eastern India. Graham Staines and sons Philip, nine, and Timothy, seven, were set ablaze while they slept in their station wagon. Staines had been in Orisha working with lepers since 1965. Hindu fundamentalists alleged that he was forcibly converting the tribal poor he worked with to Christianity. Staines’s widow, Gladys, vehemently denies these accusations.

A 50-strong mob attacked Staines and his sons while they slept. On Septmber 3, 2003, a court sentenced Dara Singh to death for the murders. However, in 2005, the Orisha high court commuted his sentence to life. 18 others charged with the murder were acquitted for lack of evidence. In a 2002, Utter Pradesh Assembly election, the ultra-Hindutva political party Krantikari Manuwadi Morcha (KMM) put Staines’s killer, Dara Singh, on the ballot in a sign of defiance.

2Burned Alive In A Trash Can 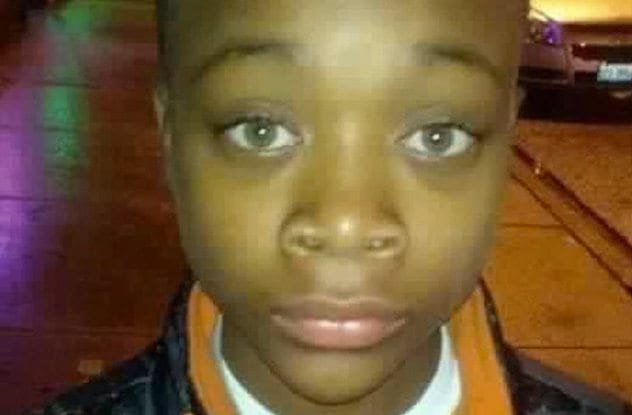 On September 17, 2016, Chicago firefighters discovered the charred remains of 15-year-old Demetrius Griffin Jr. in a trashcan. They were responding to a garage fire in a west side alley. According to the Cook County Medical Officer, Griffin was burned alive. The autopsy revealed he died from “thermal injuries due to incendiary fire in a garage can,” suggesting he was alive when the conflagration started. Griffin’s death has been ruled a homicide. No suspects are in custody.

Griffin was a freshman at Steinmetz College Prep. He was a respectful dog-lover with plans to join the school swim team. He never stayed out after curfew, so his mother knew something was horribly wrong when he failed to return home on the night of September 16, 2016. A group of Chicago pastors have offered a $7,500 reward for any information leading to the arrest in this brutal burning murder. Investigators remain stumped. 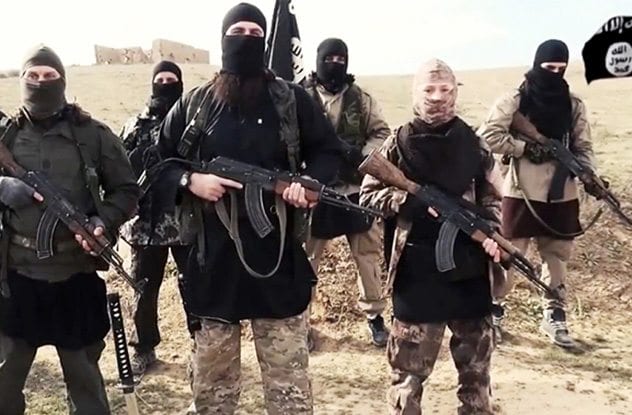 In June 2016, Islamic State militants publicly burned 19 Yazidi girls to death in iron cages in Mosul. Hundreds of spectators watched the girls, who were condemned for refusing to have sex with their captors. The girls were among thousands of sex slaves kidnapped from their homeland in northern Iraq when ISIS took control of the territory in August 2014.

The Yazidi are an ethno-religious group of Kurds. They are known for endogamy—or marrying within their ranks. Their ancient religion combines elements of Islam, Zoroastrianism, Judaism, and Christianity, which makes them a target of hardline militants. Based on estimates from the Kurdistan Regional Government, ISIS has abducted 1800 Yazidi women and girls. According to Skye Wheeler at Human Rights Watch, “The longer they are held by ISIS, the more horrific life becomes for Yazidi women, bought and sold, brutally raped, their children torn from them.”