From 1885 to 1908, Belgian King Leopold II took control of the Congo. He turned the nation into a moneymaking machine by farming ivory and rubber and building a fortune on the labor of the people who lived there.

Things quickly got out of control. Leopold’s harsh policies to keep people working turned into a brutal reign of mutilations and terror that led to the deaths of an estimated 10 million people in a few short years.

Life in the Congo Free State was a waking nightmare, the likes of which the world had never seen. Hopefully, we will never see it again.

10 Thirty-Two Towns Were Destroyed While Mapping The Congo 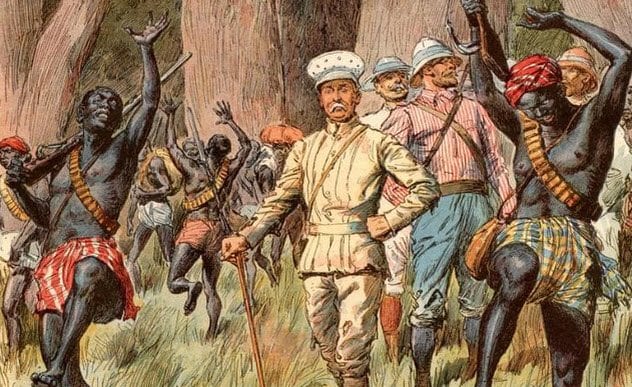 King Leopold II hired a British explorer, Henry Morton Stanley, to help him establish the Congo Free State. Stanley had already explored and mapped most of the Congo River and had experience with the people who lived there.

Stanley wasn’t evil; he entered the country with no intention other than to explore. His men and the natives of the Congo, though, had vastly different cultures. They didn’t understand each other. Those misunderstandings turned into terrible fears and soon boiled into brutal violence.

At one point in the expedition, seven tribes convened and confronted Stanley. They had seen him writing in his journal. This, they were sure, was a form of witchcraft. He would have to burn his notebook, they demanded, or he and his men would be killed.

Stanley struck back. He started shooting at the Congolese when he saw them. By the end of the expedition, he had burned down 32 of their towns. His men, though, were even worse. Men in the rear column went wild and started kidnapping and raping African women or flogging the men to death for the smallest infractions.

This was the start of the Congo Free State. Leopold II hired these men to turn the area into a workhouse, and they did it by enslaving the people. Their cruelty set the tone for the future of the state and the darkness that would soon envelop the Congo.

9 The Entire Population Was Enslaved 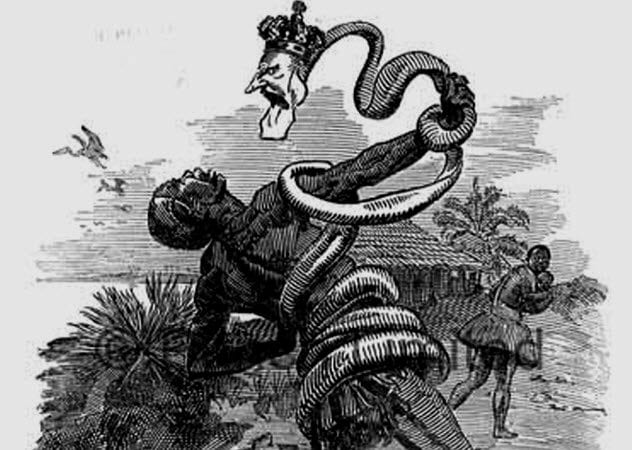 When King Leopold got the legal right to take control of the Congo, he started bleeding it dry for profits. Stanley had reported temples of ivory, and people had found caches of rubber there. So Leopold was determined to make it profitable. He turned two-thirds of the country into his own private land. The people there were forced to work for him.

At first, these people were given a penny per pound of rubber, but Leopold soon stopped even giving them pennies. Instead, he called harvesting rubber a tax that every person who lived on the land was required to pay. These people had no idea that their land had been sold, and now they were being forced into labor to live on it.

Their quotas were huge. The average person had to work 20 days per month just to meet his rubber quota, and they weren’t paid for it. They would have to meet their quotas first. Then, when they had spare time left over, they could work to feed their families. Rubber profits boomed. By the 1890s, King Leopold was selling more rubber than he could harvest. For the people in the Congo, this meant that their quotas went up and meeting the rubber tax became nearly impossible. And that was a problem—because failure to meet your quota could be punishable by death.

African soldiers were enlisted to enforce these rules, but that left a risk for the Belgians. These soldiers might spare their victims or waste their ammunition on something else. So the Belgians set up a law: Every time a worker was killed, the African soldiers had to chop off and deliver his hand.

The soldiers followed their orders because they were afraid of what would happen to them if they didn’t. They were required to meet their quotas by filling baskets with hands, sometimes even gathered from their own mothers.

After killing an old man in front of a missionary, an African soldier explained why he did it. “Don’t take this to heart so much,” the soldier told the missionary. “They kill us if we don’t bring the rubber. The commissioner has promised us if we have plenty of hands he will shorten our service. I have brought in plenty of hands already, and I expect my time of service will soon be finished.” 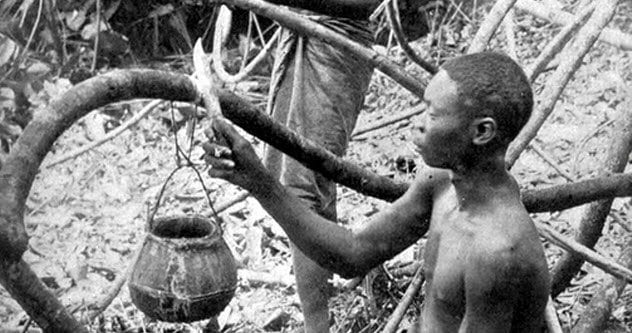 Even with the workers’ looming fear of death, gathering this rubber was difficult. It had to be gathered from vines, which were hard to find and often hung high up in the trees. The easier ones were gathered quickly, and the workers were soon forced to climb higher and higher to get anything. This was dangerous. Many would slip and fall to their deaths.

Often, the people couldn’t meet their quotas and that left them terrified. There was a very real risk that they might be killed and mutilated for their failures. Some would chop up the vines to squeeze out a little extra sap. It worked, but it eliminated those vines as a resource. So, if the workers were caught doing it, they risked beatings or death.

After catching a worker chopping a vine, one commissioner wrote a note about it. “We must fight them until their absolute submission has been obtained,” he wrote, “or their complete extermination.” Not every worker who missed his quota was killed right away. Different commissioners handled it in different ways. Some were satisfied with removing the workers’ hands, but other commissioners gave the workers savage beatings.

The villagers were given number discs around their necks so that their overseers could keep track of their quotas. If the workers fell short by a small amount, they would get 25 lashes with a whip. In harsher cases, they might get 100. These beatings were done with a strong whip made of hippopotamus hide that could break the skin quickly. Sometimes, the victims died.

When other Europeans started traveling to the Congo and saw what was happening, they were shocked. The people there, though, were unimpressed. One European officer reported that he had complained to Mr. Goffin, the secretary of the Railway Company in the Congo, that he had seen men kicked, whipped, and chained by their necks.

To Mr. Goffin, though, this was just business as usual. “Mr. Goffin shrugged his shoulders,” the officer wrote, “and said that was nothing.” 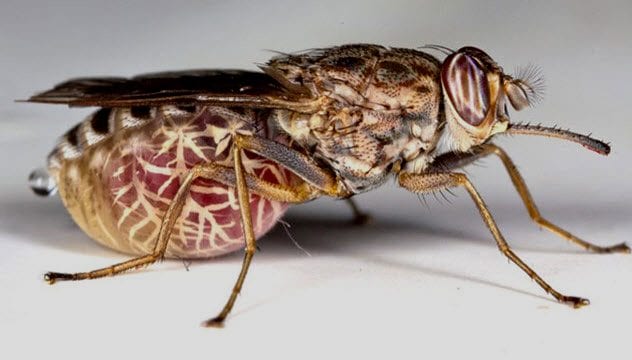 One cause of death in the Congo Free State was disease. The Belgians didn’t take care of their workers and fed them poorly, often giving them just enough food to survive. Frequently, this was rotten meat that would make the men sick.

A plague broke out because of the work conditions. To harvest the rubber, the men were forced to work in areas infested with tsetse flies that spread diseases. Illnesses swept across the Congo and, from there, farther across Africa.

The worst disease was sleeping sickness—a disease that was often fatal. It spread from the harvesters to the villagers and across the country. In some places, a third of the population caught it. This disease wiped out huge chunks of the population. By one estimate, it killed 500,000 people in the Congo alone.

4 Villages Were Burned To The Ground When an entire village failed to meet its quota or refused to pay the rubber tax, soldiers were sent in. An army of men would march into the town, slaughter the people, and burn the village to the ground. This happened a lot. One Swedish missionary reported that 45 towns had burned down in his area alone since he’d arrived.

Some villages were destroyed for almost no reason at all. One village was decimated by the soldiers, with 50 men killed and 28 taken prisoner. The women were chained neck to neck and dragged out of the town. Although they had met their quota, their recorded infraction was that “the rubber brought by the villagers to the State was not of the best quality.”

3 Women And Children Were Tortured The horrors of the Congo Free State had a purpose—they were meant to scare people into working. The Belgians didn’t just want to slaughter Africans wholesale. They wanted to make the Africans work without paying them for it. The Belgians used psychological terror as a way to motivate the Congolese. In some places, this meant doing some horrible things to the workers’ families.

Women were often kidnapped from villages that didn’t provide enough rubber. They were held hostage until the chief could meet his quota. Even then, though, the women often stayed prisoners. When the quota was met, the men of the village had to buy back their wives by giving up some of their livestock.

There was no limit to how horrible this could get. After being sent to raid a town for not meeting its quota, one African soldier reported that his European commander had ordered him to make an example of the town. “He ordered us to cut off the heads of the men and hang them on the village palisades, also their sexual members,” the soldier said, “and to hang the women and children on the palisade in the form of a cross.” Cannibalism was used in some places to keep people in line. It’s difficult to say exactly how often this happened. But one man reported that when someone was recorded as “shot” in his area, it also meant that the victim had been eaten.

The worst for this were the Zappo Zaps. They were a particularly vicious tribe whom the Belgians recruited as soldiers. They kept people in line by cannibalizing their bodies.

After a massacre, the papers reported, “Some of the victims were eaten by cannibals. [ . . . ] The bodies of all who were slain were mutilated, their heads having been cut off. [ . . . ] From three bodies, the flesh has been carved and eaten.”

One man named Nsala was interviewed after being photographed looking at his five-year-old daughter’s severed hand. He explained to the photographer that his daughter had lost her hand because he hadn’t made his rubber quota that day. His overseer had cut off her hand and foot, killed her and the man’s wife, and cannibalized both victims.

Then the soldiers gave the body parts to the man—a token to remind him that he had better meet his quota next time.

1 All This Was Done By A Humanitarian Organization King Leopold II didn’t enter the Congo as an invading army; he went in as a charity. He founded a group that was originally called the International African Association. They were a humanitarian organization that promised to make life better in Africa, and they received donations from around the world.

Most people who donated to the International African Association thought they were helping to fund public works in the Congo and putting an end to slavery in East Africa. King Leopold did nothing to dissuade them.

Begging for donations, Leopold gave a stirring speech: “To open to civilization the only part of our globe which it has not yet penetrated, to pierce the darkness which hangs over entire peoples, is, I dare say, a crusade worthy of this century of progress.”

Behind closed doors, though, he was more honest. The organization that people were funding was there to exploit and get rich off the African people. In private, he told an ambassador, “I do not want to miss a good chance of getting us a slice of this magnificent African cake.”

And so Leopold cut his knife in and sliced up the Congo—backed by the donations of concerned citizens.