China is doing its best to make the world like them. They’re heavily wrapped up in a “soft power” campaign, which means that instead of force, they’re trying to use propaganda to get what they want. They want to manipulate the way the world thinks—and they’re not even trying to hide it. They’re actually weirdly open about it, even publicly releasing reports on their progress.

That has led to a lot of Chinese propaganda pieces that aren’t meant for Chinese people; they’re meant for people in the West. The Chinese government is doing its best to churn out material they think we’ll like and that they hope will get us to like them. In the process, though, the Chinese government has revealed an awful lot about how they see the Western world—and it’s not particularly flattering.

The propaganda ministry did everything they could to make this video go viral. Chinese papers published articles calling it “viral” as soon as it was released, clearly working off the idea that, if they said it enough, it would happen.

On the surface, it seems to be an educational cartoon that explains how leaders are chosen, but you don’t have to look too closely to see the thinly veiled jabs at democracy underneath. It presents the Chinese political system as a meritocracy based on “decades of selections of tests” that picks the best man for the job through years of experience and promotions—and democracy as a reality show.

British democracy is compared to Britain’s Got Talent, while the US system is compared to American Idol. When the video shows Barack Obama, his political team consists of celebrities like Katy Perry and Oprah, all doing the “Gangnam Style” dance.

Democracy, the video suggests, is like a bunch of fans voting for their favorite contestant in a spectacle. But it’s worse than that. The most important thing you need to be president, according to the video, is “an unending flow of greenbacks.”

A music video about China’s latest Five Year Plan is a bit of a tough sell—but they definitely tried their hardest. To announce their latest government policies to the Western world, China made a psychedelic cartoon where David Bowie stands on top of a Volkswagen Bus and sings about Chinese economic policies.

It’s a weird and desperately hip video, full of cutesy phrases and catchy melodies, which is enough to keep you from noticing that it doesn’t actually explain what the Five Year Plan is. It tells you that China does a lot of research before making a policy, but it never actually gets around to saying what the policies are.

That’s the point. The video is a subtle, innocuous way of making the Chinese political system’s decision-making process seem legitimate. It’s a subtle way of getting people who live in democracies to be comfortable with the communist system.

It also makes it clear, though, that China thinks the best way to get Westerners to listen is with cartoons and music. The above video isn’t even the only one. They’ve also made a sequel and a rap video explaining the Xi Jinping’s “Four Comprehensives”—a video that Xinhua proudly described as “not brainwashing at all.”

A Chinese rapper who calls himself Chuckie released a hip, broken English rap song that tries really, really hard not to look like it was created by the ministry of propaganda. It was, though—and it makes its intention very clear from the start: “I want to restore the impression that you have on my country, China,” the song begins, “which have been exactly fabricated by media for a long time.”

The songs lists all the reasons China is a great country, although most of these are just subtle jabs at the US. When Chuckie boasts about China’s gun control laws preventing “gun slaughtering” and that they can “trust the Public Security, ‘cause the policemen are kind to citizens,” it’s pretty clear that he’s more interested in pointing out another country’s faults than anything else.

Chuckie is part of a propaganda program, and he has other songs that don’t get released to the West that show us what China’s hiding. His tone is very, very different when he raps to a Chinese audience: “All you f—ts from the Western better shut your mouth, you media punk a— white trash motherf—ers!” 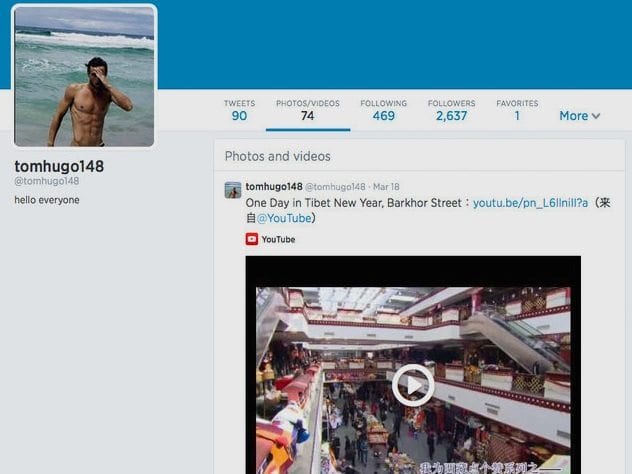 In 2014, a Twitter account for singer Tom Hugo started spouting nothing but pro-Chinese propaganda. Every tweet was either a picture of Tibetan people getting along with their Chinese rulers or an article on why China was good for Tibet.

If it seems odd that Tom Hugo is so into Chinese politics, it’s because he isn’t. The account was a fake, one of hundreds of similar accounts created by the propaganda ministry to do nothing but spread reports on how great life is in Tibet. The strategy worked better than you’d expect. One article tweeted by the fake Tom Hugo account, which accused the Dalai Lama of being an American chess piece used to contain China, was retweeted 6,500 times.

The best way to get Westerners to listen, China now believes, is through celebrities. This, a lot of people think, is why the Chinese film industry is getting bigger—because when China controls the films in our theaters, they can control the message. As Jackie Chan told an audience in Shanghai, “If we can make a film that earns [$1.5 billion], then people from all over the world who study film will learn Chinese, instead of us learning English.” 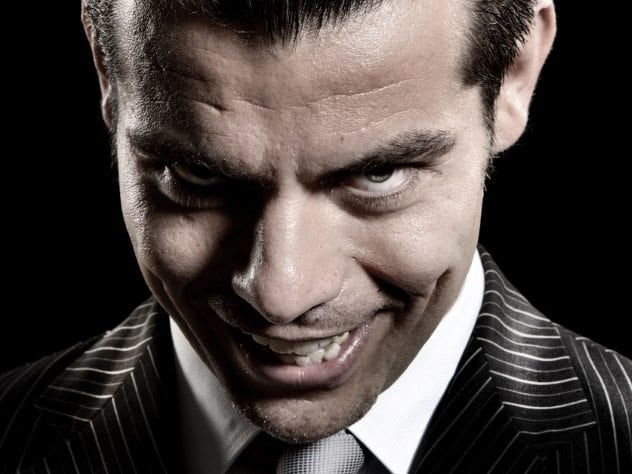 For China, movies are a battleground—and they believe both sides are fighting. It’s not just China that’s trying to influence the way people think. Countless movies, the Chinese government believes, are trying to brainwash their audiences by using something they call “invisible propaganda.”

Zootopia, according to Chinese papers, was created to subtly brainwash the Chinese people against their own party. The argument seems to be that Assistant Mayor Bellwether is a subtle symbol for the Chinese Communist party. She’s treated as dangerous for overthrowing the ruling power of a capitalist system, which the paper suggests is a subdued criticism of communism.

That’s not even the only one. Battlefield 4: China Rising was outright banned as anti-Chinese propaganda. And the papers rallied against Pacific Rim for showing Japan and the United States allying together to fight in the South China Sea. Since that’s an area that’s contested between China and Japan, the Chinese press argued that the monsters aren’t just aliens—they symbolize the Chinese government.

The alliance between the US and Japan is a big deal for the Chinese government. They’re deeply invested in the South China Sea, and they’re worried about America’s influence. They’re so worried, in fact, that, in 2011, China spent $400,000 a month to play a propaganda video in Times Square just to tell Americans to stay out South China Sea negotiations.

If the US doesn’t back off, though, they’re ready to fight. That’s the key idea behind the 3-D video above. It shows a Chinese plane getting unjustly shot down—and then China absolutely blasting the hell out of the US military in response. In the video, China’s military raids and bombs a US base that happens to look exactly like the one on Okinawa, an area that China wants to claim as its own.

The video isn’t just a fantasy. China’s making sure it’s ready for this exact fight. They’ve even made a missile that’s earned the nickname “Guam Killer,” a weapon that has clearly been designed so that, if necessary, they can target US bases. 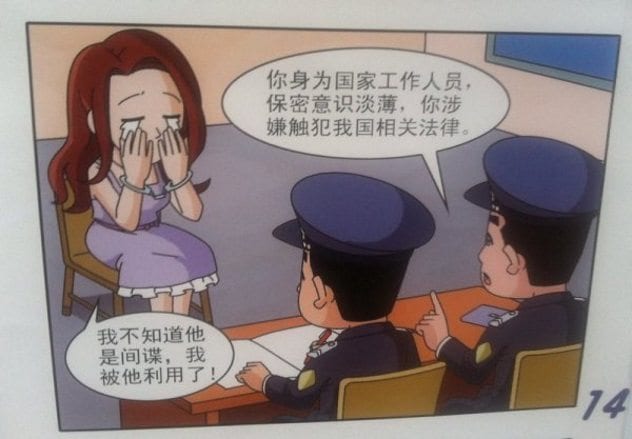 On National Security Education Day—which, yes, is a real day in China—the government released a pamphlet called Dangerous Love, warning Chinese women to be ever vigilant against the most dangerous of threats: foreign men.

The comic tells the story of Xiaoli, a young woman working for China’s propaganda department. Xiaoli meets a foreigner named David, who, as soon as he learns that she works for the state, starts sending her gifts and pretending he’s in love with her. Soon, David starts pressuring her into letting him see her work. But as soon as Xiaoli caves and lets him look at her work, David disappears—until National Security officers catch him trying to take her notes out of the country.

The comic ends with a warning to every Chinese man and woman to watch out for the most dangerous type of love: love with a foreigner. After all, your foreign boyfriend just might be a spy.

3 ‘A Tale Of Two Political Systems’

Li takes a soft approach, starting by making fun of the idea that communism is better than democracy to ease people in by making them feel like they’re not watching a propaganda speech. He segues that opening, though, into a criticism of the United States for behaving as though democracy is the only system for every country.

“This time, the Chinese didn’t buy it,” he says about the idea of democracy. He goes into the virtues of the Chinese government, claiming that China is the “world’s leading expert in political reform.” China, he argues, doesn’t need to get its legitimacy from elections. It gets legitimacy from competency.

Who is Xi Dada?

In 2015, before President Xi Jinping visited the United States, China released a video to explain to Americans who their leader was. It interviewed a group of foreign students in China and had them explain who Xi Jinping is—which they mostly did by talking about how handsome he is.

“If my husband is like him, I will be happy,” one girl tells the camera. Another calls him “handsome” and “super charismatic.” The video calls the president of China “Xi Dada,” with one student saying, “He is not just a leader, but he is like a part of their family.”

For as much as the video tries to make Xi Jinping cute and cuddly, though, it goes out of its way to avoid explaining what he believes. Westerners, the filmmakers clearly believe, don’t care about policies. They just care about looks.

“I also have a copy of his book on the governance of China,” an American student says in the video. But, like the other people in the video, he doesn’t actually know anything about the policies in that book. He immediately gives away his ignorance by announcing, “I would actually love to read it!”

1 ‘Who Most Wants To Overthrow China?’

Not every propaganda video is intended for Western eyes. “Who Most Wants To Overthrow China?” makes that clear. It’s not meant for the Western audience; it’s meant to warn China about them.

The video talks about what it calls the “color revolution”—American propaganda campaigns designed to start revolts in foreign countries. It shows refugees and terrorists fighting in the Middle East, suggesting that the US prompted these revolutions. Then it shows US politicians openly discussing plans to target young Chinese Internet users to “take China down.”

“Color revolution has already succeeded in pushing many countries into the flames of war and schism,” the video warns, “and its devilish claws are reaching into China.” Anticommunist sentiments in China, the video is implying, are not from the people. They’re planted there by the United States.

For all the cheery cartoons released in English, this one, meant for the Chinese, takes a very different tone. “If there is war,” it promises, “we will answer the call.”