Not every moment in the Second World War was a glorious act of heroism. When the whole world went to war, it meant that a few people signed up who were not exactly brilliant tacticians. When young men go to war, not everything they do is a bright idea, and that led to some stories that are downright ridiculous.

10The Allies Invaded an Empty Island 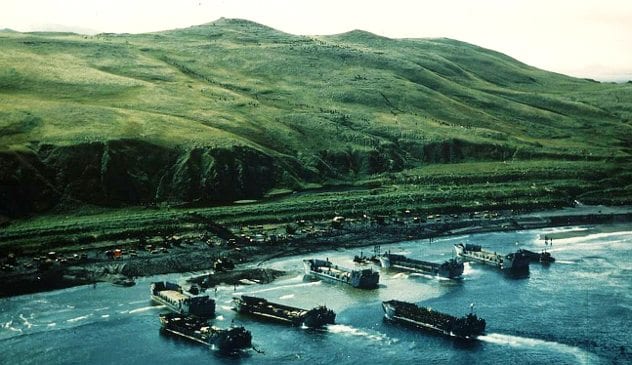 In 1943, American and Canadian forces led a joint attack on Kiska Island, determined to seize the Japanese forces stationed there. It was a vicious assault. For more than a month, they devastated it with bombing raids, dropping 424 tons of explosives from the sky and another 330 tons from the sea. Then, when the dust settled, the men moved in.

An American force of nearly 35,000 soldiers landed on the beach of the island and started their attack, while a Canadian squad took it from the other side. The two armies crawled through thick fog, firing into the darkness and struggling to avoid what they were pretty sure was sniper fire.

It was a brutal campaign. Troops were blasted by bullets that seemed to come out of nowhere, and mines exploded under their feet. The men fought for days, with hundreds giving up their lives—before they realized no one else was there.

The Japanese had left three weeks ago. The American and Canadian forces had been shooting each other. By the time they had figured it out, they had managed to cause 313 causalities.

9A Farmer Chased a Chinese-American Pilot with a Pitchfork 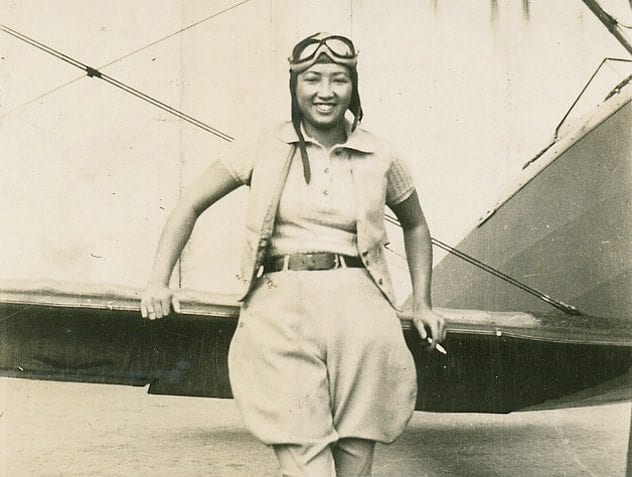 Hazel Ying-Lee was the first Chinese-American woman to fly for the US Military. She was born in the United States and thought of it as her home—and so, when the Japanese attacked Pearl Harbor, she signed up to fight.

Some people, though, were not particularly good at telling Chinese people and Japanese people apart. That caused a major problem for Hazel when she had to make an emergency landing in a field in Kansas. When the farmer who lived there looked out his window saw an Asian woman get out of an American plane, he freaked out. Clearly, he decided, the Japanese had started their invasion of the United States–by sending a single woman to a farm in Kansas.

The man grabbed a pitchfork, ran outside, and chased Hazel around her plane, yelling to his neighbors that the Japanese had landed. He chased her around the plane several times, with Hazel having to hide under her wing to keep from getting speared before she managed to convince him she was American.

8A Pilot Attacked a Japanese Battleship with a Coke Bottle 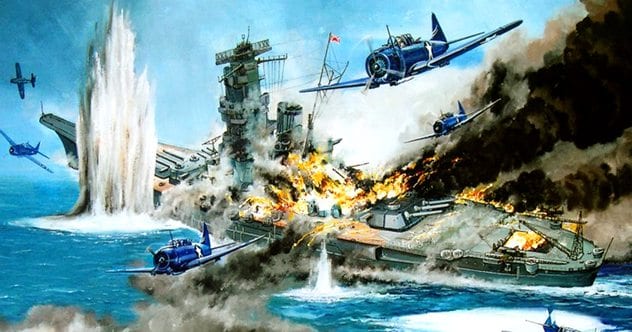 The Yamato was one of the biggest battleships in the Japanese Navy. It was a massive, incredibly heavy boat, and one that seemed almost unsinkable. Thomas Lupo, though, was determined—and he was going to throw everything he had at it.

Lupo and his squad flew at the Yamato and opened fire, determined to sink it at any cost. For his part, Lupo was so determined to take the boat out that he expended every single bullet he had. He shot at it until his guns started clicking and he realized he was out.

Not one to give up just because he did not have any weapons, Lupo grabbed an empty Coca-Cola bottle and threw it at the Japanese battleship. When that did not work, he took all the loose change he had and everything else he could find and threw it.

His change was not able to sink the Yamato—the ship survived and went on to fight another day. Some Japanese officer, though, probably seriously reflected on life when a coke bottle nearly knocked him on the head.

7Japan Bombed a Fence in Saskatchewan 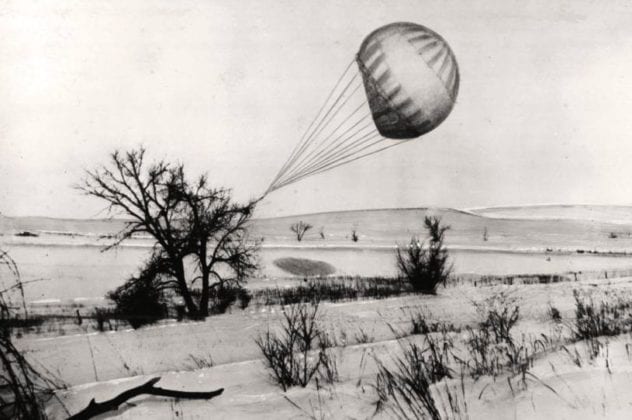 In 1945, Japan launched a series of explosive balloons at North America. Their plan was to start forest fires and make the people panic—but it did not work particularly well. Out of the 9000 balloons they sent out, only 300 of them actually made it across the ocean.

One of the ones made it through landed in Saskatchewan, Canada’s great, flat province. There, the bomb landed in a farmer’s field and exploded on its target. There was only one casualty: the farmer’s fence.

It might not seem like much, but Canada was determined to make sure the people did not panic. Every newspaper in the country was directly ordered not to report on the loss of their beloved fence, lest the people believe that the war effort was unwinnable. They even hushed up a 15-year-old boy who witnessed it, who, for years, carried the image of destruction with him as his darkest secret.

6A British Pilot Made an Emergency Landing and Captured an Island 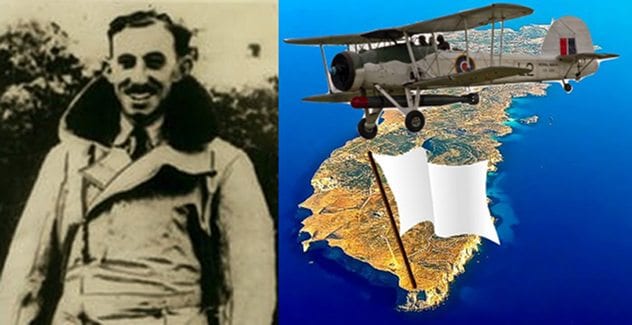 Sgt. Sidney Cohen was running low on gas when he made an emergency landing on Lampedusa Island. This was an island controlled by the Italians, but he was in a desperate situation. He could not risk crashing into the water, and it was his only hope for survival. He landed his plane, and the Italians came rushing out—but they were not carrying guns. They were waving white flags.

The leader of the group there told Cohen he wanted to surrender. They figured he was the first of a big invasion, and they were not about to risk it. Cohen tried to play it cool. “I told him I would have to see the ‘No. 1’ man,” he later recounted.

While he was on the island getting their declaration of surrender, the Allies actually did bomb it, which probably made his case stronger. Cohen rolled with that, too, and managed to come back from a forced landing having captured an entire island.

5A US Submarine Shot Itself with a Torpedo

The USS Tang was one of the most successful Navy submarines. In its one short year of combat, it had sunk an incredible 31 enemy ships. The men aboard were fearless—and so, when they saw a convoy of Japanese ships that drastically outnumbered them, they attacked anyway. Outnumbered or not, nobody could skin the USS Tang—except for the Tang itself.

They managed to take out most of the convoy without even taking a hit. But when they fired their last torpedo, it made an unexpected curve. The torpedo turned and came right back where it had come from—and blew a hole in their ship.

The crew had to surface and wait for rescue—which, ironically, came from a Japanese Destroyer. The men sunk themselves and were saved by one of the ships they were trying to sink. 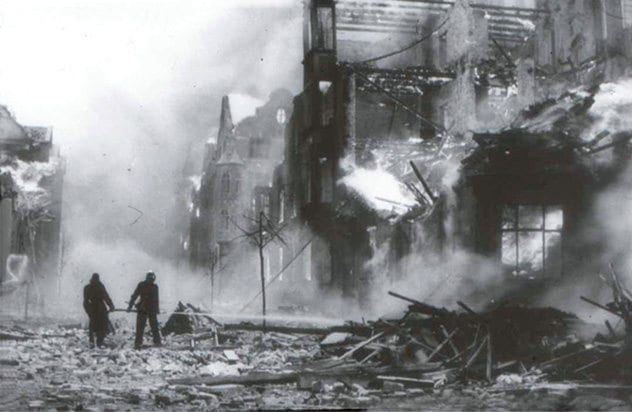 In 1945, British bombers raided Nazi Gestapo headquarters in Copenhagen. Or, at least, that was the plan—but things did not quite turn out that way.

The planes were to attack in three waves, launching hellfire upon the Nazis and helping the Danish resistance breathe safely once more. When the first wave swept in, though, one of the planes accidentally smashed into a lamp post.

The impact sent him spiraling out of control. His wings tore into the side of a house, where his bombs got ripped off and fell on the civilians below. Then the plane went down and crashed into a Catholic school.

The next wave saw the wreck he had made and figured that must be the target, so they unloaded pretty well every bomb they had on Catholic school children. By the time the third wave had made it, the elementary school was a smoking crater in the ground. Any doubts those men had about where to drop their bombs were gone—and all but one dropped their payloads on the school kids.

3A German Sub Sank Itself by Flushing the Toilet 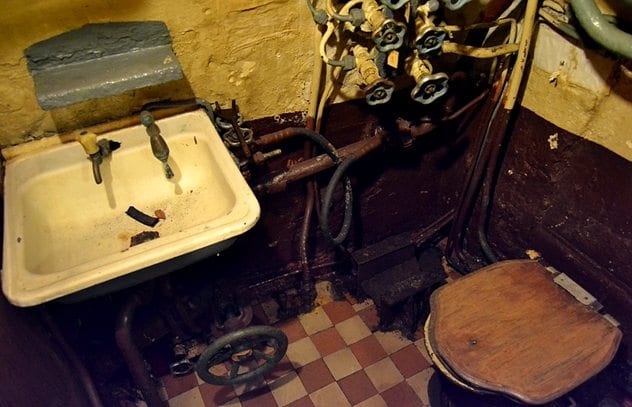 The Germans were pioneers in submarine sewage technology. It might not be something you have spent your time thinking about, but expelling waste on a submarine was a difficult affair. Normally, they had to do it near the surface, but the Germans had advanced “deepwater high-pressure toilets” that let them expel waste at the bottom of the sea.

It was a surprisingly complicated process. When the German submarine U-1206 tried it out early on, their engineer turned the wrong valve and managed to sink the whole ship. Instead of releasing their waste into the sea, he opened it up and poured a mix of sewage and seawater into the sub.

Human waste started pouring into the submarine, soon spreading over the ship’s batteries and letting out chlorine gas. The men had to surface to keep from poisoning themselves, and when they did, they immediately got blasted by British ships.

They grabbed rubber dinghies and abandoned ship, paddling their way to the nearest shore and leaving behind a submarine full of their own waste.

2The US Army Was Attacked by the US Air Force

The US Army’s II Corps was in Sicily when they got attacked—by American planes. A whole squad of US planes came up behind them and opened fire on their tanks, trying to blow them out of the ground.

The men let off yellow smoke flares, a signal the army had set up to let another soldier know that you were friendly. Even with the yellow smoke flares burning, though, the planes kept attacking, firing at the armored division with everything they had. The men were not sure what was going on. Were these disguised German pilots, launching a sneak attack in American planes?

With no other choice, they fired back and shot one of the planes out of the sky. The pilot managed to parachute out, and the troops moved in to see who was attacking them. The man they captured, though, was American.

The tank commander yelled at the pilot, “Why you silly son of a b****, didn’t you see our yellow recognition signals?” The pilot looked at him, baffled, and said, “Oh . . . is that what it was?”

1England Turned a Live Bomb into a Tourist Display

After the war had ended, Lincolnshire County kept a gigantic bomb on display by the road. People would come to see it, figuring it was a sculpted monument meant to commemorate the soldiers who had given their lives in the war. Tourists would climb on top of it and get their picture taken with it, and cars drove by it every day.

It stayed there until 1958 when the city council decided to move it so they could widen the road. When they tried to pick it up, they found out it weighed 22,000 pounds (10,000 kg). They soon realized that this was not just a prop—it was a live “Grand Slam” bomb, the biggest explosive the army had.

For at least 14 years, the bomb had just sat there, waiting to explode and destroy the entire city. Strangest of all, nobody knew who put it there. There was no record of anyone setting it up—but somehow, a gigantic bomb that could have leveled a town ended up sitting by the side of the road.