Most of the filmmakers who brought us the movies on this list were doubly creative. Except in two cases, they both directed their films and wrote or created the story for them. Directing the movies they’d written ensured that their visions would appear on the screen in much the same way as they’d appeared in their minds and on the pages of their scripts.

The members of the evil cult of hippie Satanists featured in David Durston’s 1970 exploitation film, I Drink Your Blood, take LSD and worship the Devil after setting up camp near a small, isolated town. When a local resident confronts them about their having sexually assaulted his granddaughter, the cultists drug him with LSD.

To avenge the old man, his grandson exposes the hippies to the disease that killed a rabid dog. Soon, the cultists are foaming at the mouth and killing people as they cause further mayhem by infecting construction workers building a nearby dam.

Durston, who wanted to base his movie on a horrific incident that actually could happen, was inspired by two real-life events: the murders committed by the Charles Manson Family and a rabies epidemic in Iran.

The film references the former source by including a scene in which one of the mad hippie cult members “paints the word ‘pig’ on the stomach of a cohort being tortured.”[1] The Manson murderers painted the same word in blood on the walls of the houses that became their crime scenes. The rabies outbreak that helped inspire the movie occurred among schoolchildren attacked by rabid wolves.

According to director Wes Craven, a Los Angeles Times article about a family who’d made it out of Cambodia’s killing fields alive inspired his 1984 movie, A Nightmare on Elm Street. The article reported that the family immigrated to the United States, but their young boy was haunted by the ordeal.

Afraid that the monster in his dreams would seize him in his slumbers, he refrained from sleeping for days. Finally, his parents thought the crisis had passed—until they heard him screaming. They rushed to his bedside, only to find him dead.[2] 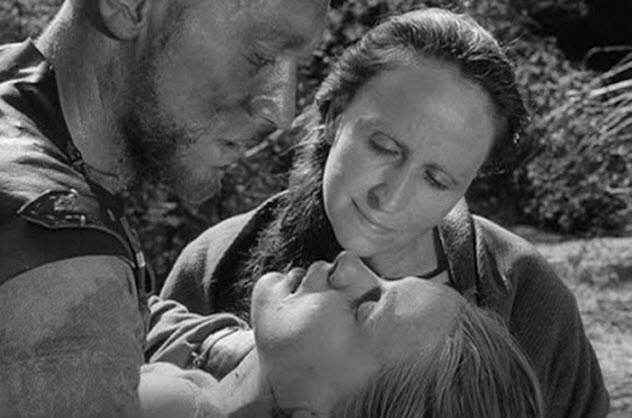 As inspiration for his 1972 debut feature film, The Last House on the Left, Wes Craven drew on Ingmar Bergman’s The Virgin Spring in which abducted teenage girls are taken into the woods.[3]

Bergman’s Academy Award–winning film was itself inspired by a Swedish ballad recounting the rape and murder of a young, virginal woman on her way to church and her father’s revenge against her attackers.

Craven’s film focuses on sex and violence as a gang of sadistic escaped criminals kidnap two teenage girls and take them into the woods near one of the girls’ houses. There, the kidnappers rape, torture, and kill the girls. Then the killers face the brutal vengeance of one of the dead girls’ parents.

Wes Craven’s 1996 slasher, Scream, inspired director Nick Simon’s 2015 movie, The Girl in the Photographs, on which Craven was the executive producer.

Like Scream, The Girl in the Photographs is a slasher set in a small town in which young adults are beset by a band of psychotic killers who torment and kill them. Colleen, a supermarket cashier, starts receiving photographs of victims of violence, but the sheriff of her small South Dakota town dismisses the pictures as nothing more than sick pranks.

When the photographs “go viral,” fashion photographer Peter Hemmings sees a similarity between them and his own work. Accompanied by an entourage of models, his girlfriend, and his assistant, he travels to the town, which, coincidentally, is where he was born. Colleen joins them for a party in a secluded rental house where they’re attacked by the killers who gave Colleen the pictures of their previous victims.[4]

Brian De Palma got the idea for his 1992 movie Raising Cain from a child psychologist with whom De Palma is friends. The psychologist told De Palma that he wanted to take a break from his practice so he could “conduct an intensive home study of his daughter.”

De Palma imagined Dr. Carter Nix Sr., a “twisted version of his friend,” who traumatizes a child (Nix Jr.) to the point that the boy develops multiple personalities. Nix Jr. compartmentalizes them so successfully that he later appears to be a model family man for his wife and his daughter, Amy.

When Amy is old enough for her grandfather to start his psychological studies again, one of Nix Jr.’s alternate personalities, Cain, kidnaps children to serve as the control group for Nix Sr.’s research.[5]

Brian De Palma’s 1980 thriller, Dressed to Kill, was inspired by the director’s own experience. In the film, a young photographer follows a criminal and takes pictures of him. In his own youth, De Palma did something similar with his philandering father.[6]

Dressed to Kill is also inspired by Alfred Hitchcock’s 1960 film Psycho. Both films start as if a woman is to be the central character—Marion Crane in Psycho, Kate Miller in Dressed to Kill.

De Palma’s observation of the operations performed by his father, a Philadelphia surgeon, also influenced De Palma’s making of the movie. Set mostly on Staten Island, the movie’s cast of characters includes a man who meets an untimely end, twins, and an amateur detective.

The man is Phillip Woode, the twins are Danielle and Dominique Blanchion, and the amateur detective is the twins’ neighbor, journalist Grace Collier. Through her window, Grace watches Dominique murder Phillip (a la Rear Window). Then Grace reports the crime to the police. But by the time they arrive at the twins’ apartment, Phillip’s body has been stashed inside the sisters’ couch and the police conclude there’s been no murder.

Grace takes it upon herself to investigate the crime. Danielle’s ex-husband, psychiatrist Emil, has Grace admitted to his institution under the ruse that she’s a deluded new patient who believes she’s a journalist. He then brainwashes Grace into forgetting about Phillip’s murder. At the end of the film, when police question her, Grace repeats what Emil has taught her to say: “There was no body because there was no murder.”[7]

In reality, Dominique died when she and her conjoined twin, Danielle, were separated. Danielle, who killed Phillip, denies Dominique did so, insisting her sister died the previous spring. The dead twin exists now only occasionally as Danielle’s alternate personality (a la Psycho). 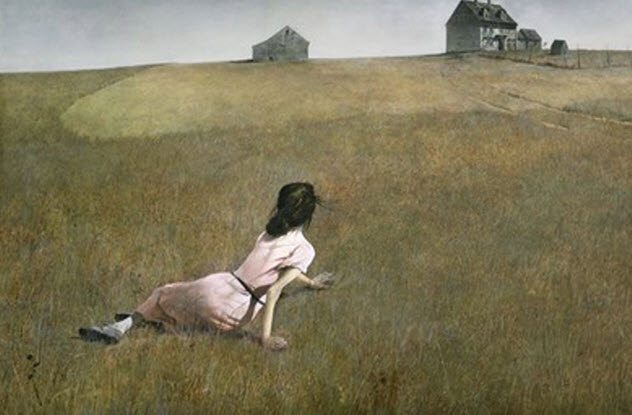 The painting was also used on a poster advertising the movie. Christina’s World shows its subject, a young female polio victim, laboriously crawling across a field toward a distant farmhouse.

Hooper said that Gein’s furniture, tableware, and other artifacts—which Gein made from the skins and bones of his victims—and his masks, made of their faces, inspired Leatherface’s similar mask and furniture.

While shopping for Christmas at Montgomery Ward, Hooper saw a display of chainsaws. The sight gave him the “unholy inspiration” of adopting a chainsaw as Leatherface’s weapon of choice.

How Christina came to be in Wyeth’s field far from the farmhouse is a mystery. But the artist’s painting is disturbing because she’s alone and helpless in the vast expanse of the field, far from assistance.

In the movie poster based on the painting, her plight is even worse. Between her and the farmhouse, the film’s villain, Leatherface, is interposed, running toward her with his chainsaw raised overhead.[8]

For his 1976 horror movie, Eaten Alive, Hooper found his inspiration in a series of murders committed by Joseph D. Ball. Born in San Antonio in 1896, Ball, who’d been a bootlegger after his World War I service in Europe, opened an Elmendorf, Texas, bar called the Sociable Inn. The property included a pond that was home to Ball’s six alligators. He fed cats and dogs to the reptiles and charged his customers to watch the alligators feed.

But Ball also fed the alligators the remains of the women he robbed and murdered. These women included his wife, former girlfriends, and women he hired to work in his bar. When Bexar County Sheriff’s Department deputies visited the Sociable Inn to ask him about the women’s disappearance, Ball committed suicide, shooting himself with a gun he kept behind the cash register. The madmen in Eaten Alive were inspired by this psychotic real-life killer.[9]

Dan O’Bannon’s 1979 movie Alien was inspired by Edward L. Cahn’s 1958 horror film, It! The Terror from Beyond Space; by Mario Bava’s 1965 movie, Planet of the Vampires; by John Carpenter’s 1974 motion picture Dark Star; and by O’Bannon’s own struggles with Crohn’s disease.

The earlier movies’ similarities with Alien are not hard to discern. In It! The Terror from Beyond Space, Colonel Edward Carruthers, the sole survivor of an expedition to Mars, claims that an alien aboard his ship murdered his crew. In Alien, an alien creature lurks aboard a derelict spaceship boarded by a rescue crew responding to a curious transmission, killing Warrant Officer Ripley’s crew.

In Planet of the Vampires, two cargo ships investigate a strange distress call. The crew of one of the ships, The Argos, “is possessed by an unseen force” which only Captain Markary can resist. In Alien, the crew of the Nostromo, responding to a similar transmission, encounters an alien creature which seems to spring or pounce on them from out of nowhere. It attaches itself to their faces and uses their bodies to incubate its eggs. Only Ripley and the crew’s cat, Jones, survive.

Halloween director John Carpenter’s Dark Star, cowritten by O’Bannon, features a beach ball–like alien that the ship’s crew pursues through ventilation shafts as they fend off the creature’s attacks. Although Dark Star is a parody of horror and science fiction movies, O’Bannon wasn’t satisfied with the film’s absurd alien creature.

“The idea of making a movie where the alien felt like a real creature planted the seed for Alien,” which features a terrifying, monstrous creature that often attacks the Nostromo’s crew from the ventilation shafts through which it travels.

The offspring of the creature in Alien have a disgusting, violent means of expelling themselves from their hosts’ bodies. The parasitic creatures burst through their abdomens, leaving the crew members’ corpses looking as if something inside them had exploded. The Crohn’s disease from which O’Bannon suffered inspired this violent means of the creatures’ egress.[10]

Read more terrifying facts about horror movies on 10 Horror Movies To Scare You In Under Five Minutes and 10 Frightening Facts About Horror Movies.

10 Fan Theories That Are Better Than the Actual Movies