Questioning the existence of aliens is something that scientists and average Joes alike have done for decades. Everything from Spielberg’s E.T. the Extra-Terrestrial to NASA’s latest press releases shows just how large the discussion is and always has been. In fact, most people do believe that aliens exist in some fashion.

The main necessities for life are water and some form of energy source. Not surprisingly, there are some planets, exoplanets, and moons that fit the bill. Although we probably won’t find little green men with bug eyes, that doesn’t make the prospect any less exciting. Here are our 10 best chances at finding life in the universe. 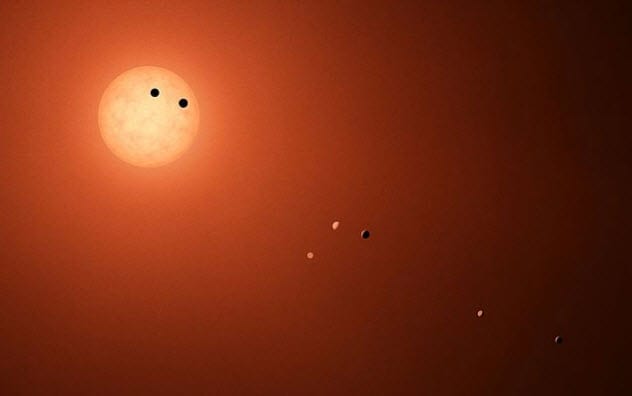 TRAPPIST-1 is a planetary system a few dozen light-years away whose discovery was announced in early 2017. This system consists of seven Earthlike exoplanets orbiting an “ultra-cool” star, and it is one of our best shots at finding life beyond our own solar system.

For one thing, studying these exoplanets will be relatively easy because of how they rotate around their star. We can use a telescope to observe their transits, which is when they eclipse their star by passing directly in front of it from our perspective. We see the temporary dimming of the star’s light as an exoplanet passes between the star and Earth.[1]

These exoplanets also have reasonable temperatures due to the nature of their star. So they are cool enough for liquid water to have a chance to form.

Although all the exoplanets in this system are legitimate candidates to host alien life, three in particular are soundly in what is called the habitable zone. This is the area around a host star where an Earthlike exoplanet is capable of forming liquid water, assuming that all life-forms, like those on Earth, do in fact need water to survive. 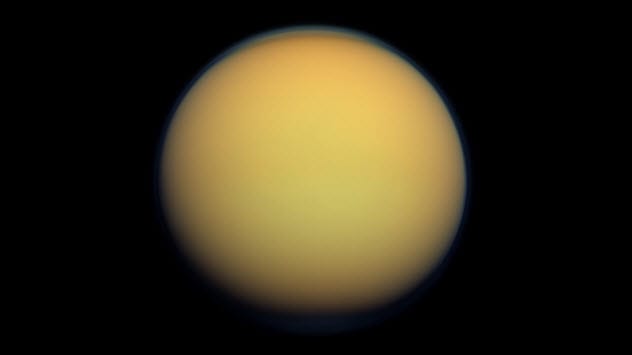 Titan is the largest moon of Saturn, the sixth planet from our Sun. This moon could potentially harbor life but possibly not in the sense that we think. Titan does not exactly fit the description of being in a typical habitable zone.

Titan has water, and it has liquid. It just doesn’t have liquid water.[2] The water on this moon is completely solid because of the extremely cold temperature.

However, the liquid that fills the lakes and streams is not water but rather hydrocarbons. A hydrocarbon is a chemical compound of hydrogen and carbon in varying proportions. On Earth, we often think of these as gases like methane or propane.

This is the key factor that would make potential life on Titan so different. Essentially, these life-forms would not survive on liquid water like we do but rather on these liquid hydrocarbons.

Although there are still some technicalities and unanswered questions about science (like if life can live off something other than water), the possibility that Titan has alien life is certainly there. 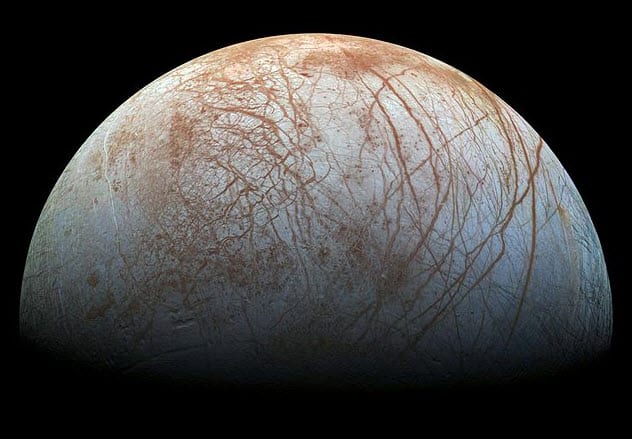 Europa is one of Jupiter’s moons here in our own solar system. It is another candidate due to its potential to hold liquid water. Europa is thought to have all the necessities for life including water, energy sources, and the right chemical buildup. The water is thought to be stored in oceans underneath Europa’s surface.

It wasn’t until recently that scientists made it possible to begin the exploration for life on this moon. It was announced in early 2017 that a mission called Europa Clipper would take place over the next several years. This mission is sending a spacecraft to Jupiter’s moon to take pictures of the surface. This flyby would happen repeatedly, offering multiple opportunities to analyze the moon and search for life.[3] 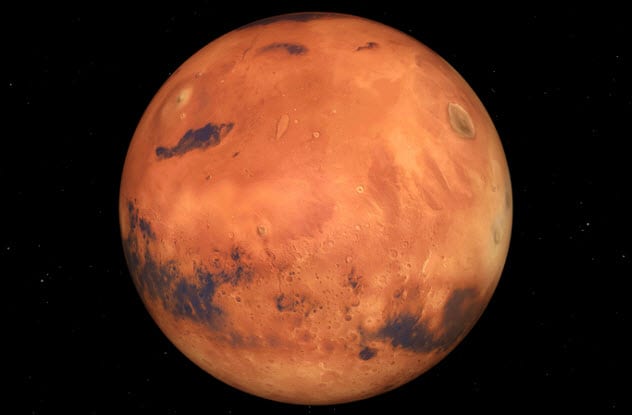 We know by now that we won’t find little green men or any intelligent form of life that we understand. However, there is evidence that there was and may still be microscopic life on the small red planet.[4]

NASA’s data suggests a past presence of floods and streams throughout the dry surface. So there is a chance that liquid water was once on the surface and life could have survived. With further exploration, scientists might find liquid water on Mars presently, instead of just the ice caps that they see today. 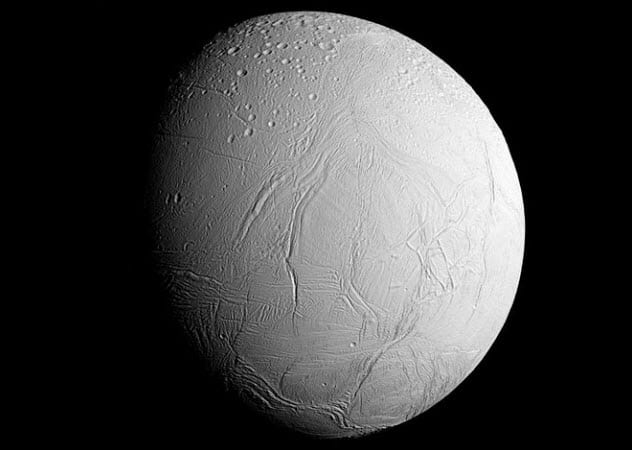 Enceladus, another of Saturn’s many moons, has the astronomy world abuzz with its potential to hold water, unlike its hydrocarbon-rich sister. The water is supposedly underneath the crust of the moon, similar to Europa.

Once again, this would mean that microbes of some kind live there. At first, the presence of water was simply a hypothesis after some evidence found in 2015 gave scientists hope.[5]

But in early 2017, a mission involving the Cassini spacecraft detected hydrogen molecules that point to a chemical reaction occurring under the surface. This chemical reaction, in which the ocean water reacts with surrounding rock to produce energy, could be useful to life-forms because an energy source is crucial to life as we know it. 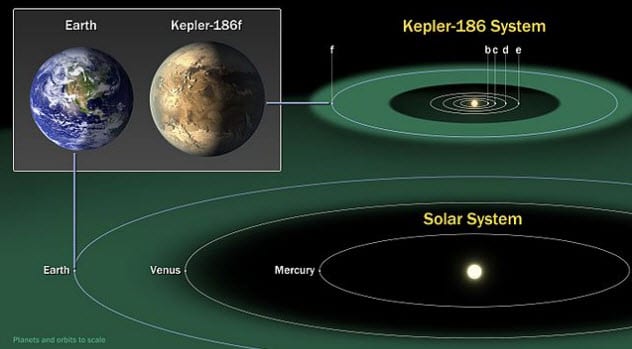 Kepler-186f is an exoplanet orbiting the star Kepler-186 about 500 light-years from Earth. Discovered in 2014, it is the first Earth-size exoplanet found to be orbiting in its star’s habitable zone.

Less than 10 percent greater than Earth’s size, it is the closest “match” to our home planet. Any other similarities, like density, are unknown. But the presumably rocky composition can be hypothesized simply based on the exoplanet’s size.

Both its Earthlike size and its location in the habitable zone are what make Kepler-186f a more likely candidate to accommodate life. However, the presence of water has not been confirmed because of a lack of proper information, such as temperature.[6]

As Earth is our only known host of life, the theory is that a place like Earth in other ways might also be home to some form of life as we know it. 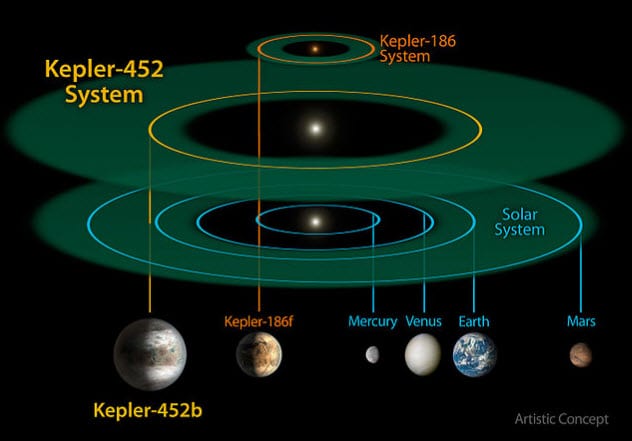 According to NASA, Kepler-452b could be “one of the best [places] to find extraterrestrial life.” This exoplanet, however, may prove to be difficult to explore. It’s over 1,000 light-years away. Even so, scientists have confirmed that Kepler-452b is located in its star’s habitable zone, along with several companion exoplanets.[7]

For a while, Kepler-452b was known for being the closest to Earth’s size. That honor now goes to Kepler-186f. Still, Kepler-452b’s star is much more Sunlike, which is certainly interesting. Furthermore, this exoplanet is one of science’s most notable subjects, particularly in the eyes of the SETI (Search for Extraterrestrial Intelligence) Institute, a leader in the exploration for extraterrestrial life. 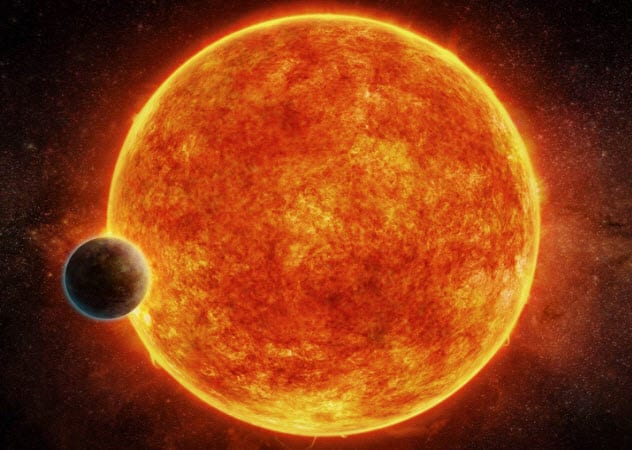 This “super-Earth” is a recently discovered exoplanet that is in its star’s habitable zone. LHS 1140b is considered by some scientists to be one of our best opportunities to find other life-forms.

A super-Earth is an exoplanet that is up to 10 times more massive than our Earth. It is often presumed that a super-Earth is rocky, although we can’t be sure without other observations. LHS 1140b, the mother of all super-Earths, is also believed to be rocky with an iron core . . . and to possibly have aliens.[8]

At only 40 light-years away, this exoplanet is in a good position for us to send a signal to intelligent life there, should it exist. In addition to LHS 1140b’s proximity to Earth, the exoplanet’s slower rotation speed makes LHS 1140b easier to observe. 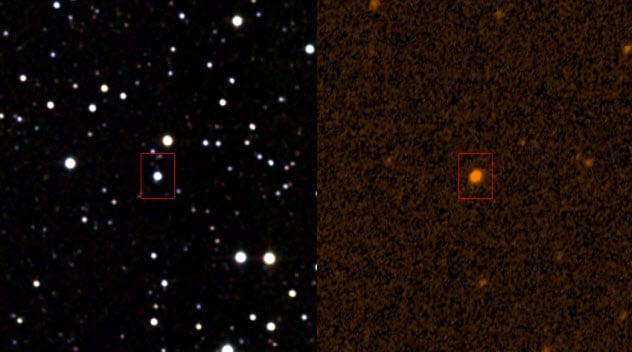 Tabby’s Star, or KIC 8462852, has received a lot of buzz for being the host of an “alien megastructure.” Well, maybe.

At 1,500 light-years away from Earth, this star was discovered by Yale astronomer Tabetha Boyajian and noted for its peculiar behavior. Tabby’s Star dims at such extreme rates over time that the dimming cannot be attributed to an eclipsing planet. Other explanations include an unidentified space object or the more fun explanation, aliens.

However, the most recent and most likely theory about Tabby’s Star is that it ate its own planet, which is certainly fascinating in its own right. Still, aliens have not been completely ruled out.[9] 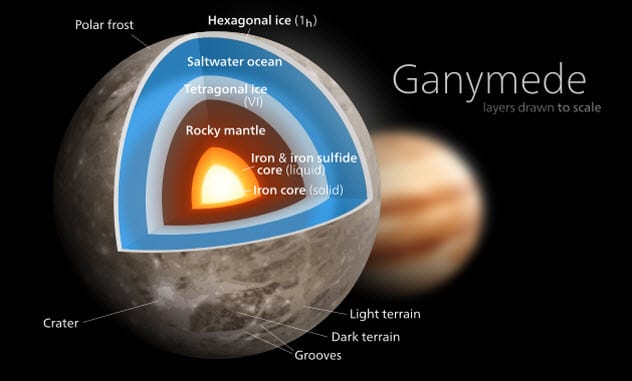 Another one of Jupiter’s moons might contain life. Like the other moons, Ganymede is thought to have an ocean beneath its crust. Surprisingly, this ocean could contain more water than Earth itself. In fact, investigation into Ganymede’s surface shows that there may have been a flood once when liquid water escaped from beneath the surface through cracks or other openings.

The exploration of this moon even brought about new research methods. For example, by analyzing magnetic fields, scientists found that they can possibly deduce information about the interior of the object, including whether liquid water is present.

As of early 2017, there is no mission exploring Ganymede. But a probe called JUICE (JUpiter ICy moons Explorer) is set to explore Jupiter’s moons further in the next several years.[10]