Eagles are known worldwide as majestic aerial predators. Their hunting expertise and legendary awe have earned them both respect and fear from humanity. Behold the astonishing aspects of their intense lives and intricate relationship with us. 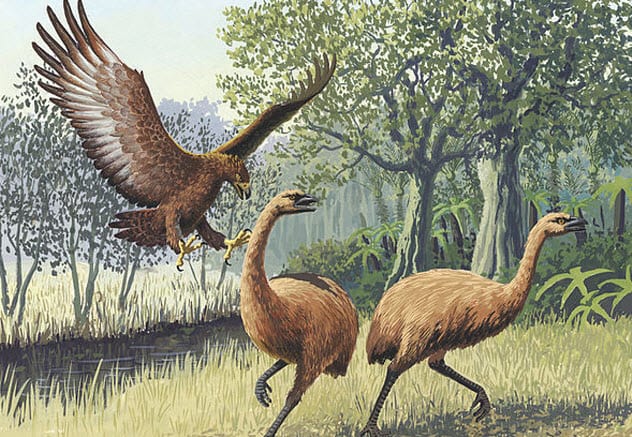 At present, golden eagles are capable of dragging adult mountain goats off cliffs with a bone-crushing grip strength of 750 psi, more than a lion’s bite force. However, a golden eagle would have no chance against the prehistoric man-eating eagle of New Zealand.

Before human colonization by the Maori people, the island only had three species of bat to greet them as fellow mammals. Uncontested, birds became the dominant class, growing into giants. The 3.6-meter (12 ft) flightless moas filled the niche of grazing herbivores and were the main food source of the largest, most powerful eagle ever.

Haast’s eagle, flying on a 3-meter (10 ft) wingspan, easily claimed the title of New Zealand’s apex predator. Diving with 1,000-psi, 9-centimeter (4 in) talons at 50 miles per hour (80 kph), it was wholly capable of killing a human, as described in Maori oral tradition.

Nevertheless, man prevailed. Five or six centuries ago, the Maori had finally hunted the moa to extinction, which correspondingly caused the extinction of Haast’s eagle.[1] Having discovered the eagle in 1871, Julius von Haast was laughed at for the fearsome tall tale he brought back to his companions . . . until he brought back the bones as well. 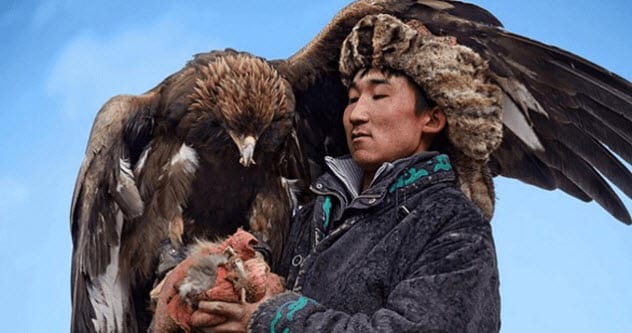 Though Haast’s eagle feasted on the Maori in ancient times, the golden eagle has been trained throughout history to hunt for our food rather than our flesh. Using seven different techniques depending on the nature of prey, the golden eagle was reserved for the falconry of kings in medieval Europe. The ancestral eagle hunting traditions of Turkic people, most notably the Mongolians, continue today.[2]

Taken from the nest as eaglets, they are raised by only one master to form a powerful personal bond. After being treated as family for a decade, they are released into the wild for natural reproduction. Eagle hunters ride on horseback to follow the attacks on various prey items such as the wolves, foxes, and hares of the Eurasian steppe. 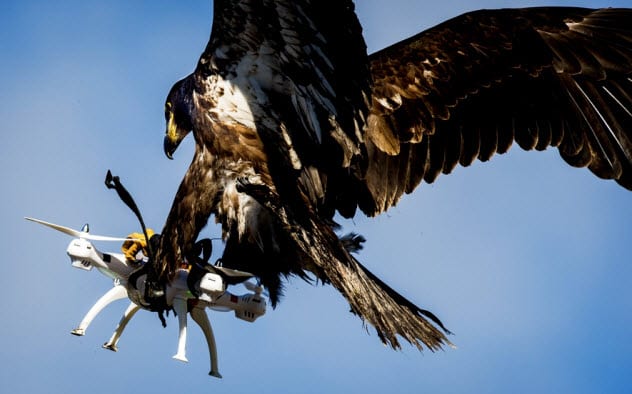 In First World civilizations, the lifestyle of an eagle hunter is unwelcome. Amazingly, though, the eagle is the perfect solution for an advanced technological threat: drones.

With the ubiquity and accessibility of drones in the modern world, not all tech enthusiasts are using them for recreational purposes. These drones can be used to covertly spy on buildings and people for later theft as well as to deliver and drop illegal substances or explosives.[3]

Reports have found drugs attached to criminal drones in prison grounds, confirming our worst suspicions. Praised as “a low-tech solution for a high-tech problem,” specialized drone-catching eagles were first trained by Dutch police as a safer alternative to bullets and nets in the presence of crowds.

Much like avoiding the beak and talons of a competitor, the trained eagles are naturally able to strike the drone in the center while avoiding the rotors. The police and military in modern nations across the world, such as Scotland Yard and the French Air Force, are highly interested in replicating Dutch success. 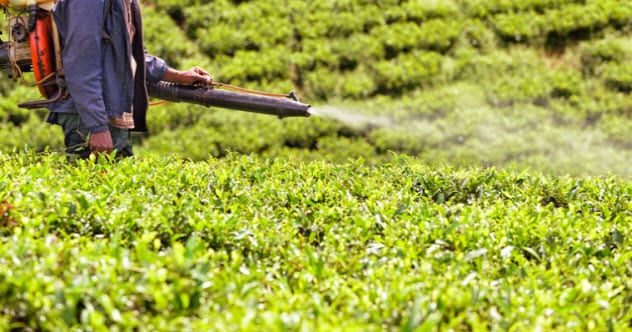 Eagles have also been used as a major political force before—in the politics of the DDT ban. The popular conception is that DDT is a dangerous poison in addition to a powerful pesticide that ruins wildlife.

The bald eagle is a special focus due to its bioaccumulation after consuming many fish. Adults are killed and eggshells are thinned to the point of being crushed during incubation. But did you ever ask if this was scientific truth?

The truth is that DDT isn’t even marginally dangerous to humans. For bald eagles, the cause of decline was almost entirely due to shooting and habitat loss. After the Bald Eagle Protection Act, eagle numbers soared even during the peak of DDT spraying.

US Fish and Wildlife Service biologists even “fed large doses of DDT to captive bald eagles for 112 days” to no adverse effect, and none of the hundreds of dead eagles found between 1961 and 1977 were killed by DDT or its residue. Despite the unpopular facts, environmentalists repetitively pushed to outlaw DDT for decades. Eventually, the government relented.[4]

The suppression of a genuinely harmless and incredibly useful chemical proved to be only a demonstration of rising environmentalist political power. Though this is beneficial for the well-being of the world, the question remains: Does the end justify the means? 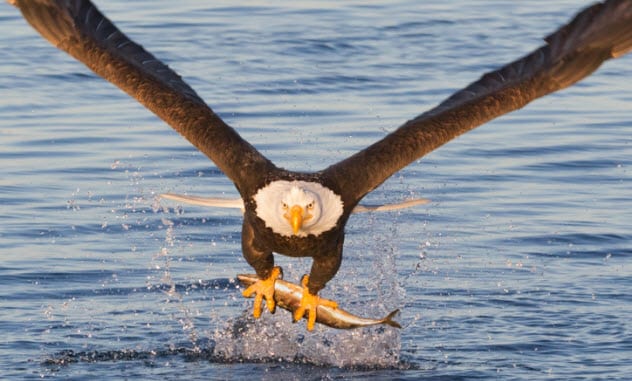 You may have learned about Benjamin Franklin’s laughable proposal for the humble turkey to be America’s national bird instead of the fierce bald eagle. But the beautiful, grand American symbol is not the glorious predator you think it is.

Respected naturalists often noted that the bald eagle was not a hunter but instead a scavenger and thief. It used its size to bully food from the highly successful fish-hunting osprey.

Sarcastically quoted by Meriwether Lewis in his adventures during the Lewis and Clark Expedition, “We continue to see a great number of bald eagles. I presume they must feed on the carcasses of dead animals, for I see no fishing hawks to supply them with their favorite food.”

This occurs because the bald eagle is not a true eagle. It is a sea eagle related to the African vulture lineage, with no will to kill for itself. Its only “hunting” is in catching the salmon that have nearly tired themselves to death during migration, if it isn’t picking up the ones that are already dead.[5]

Franklin described the bald eagle as a “rank coward,” fleeing from an aggressive kingbird, a bird as large as a sparrow. Even its classic screech is a lie. The noise is from a red-tailed hawk. Bald eagles, unimpressively, chirp.

There is no courage, no honor, in the bald eagle. The more powerful, truly noble golden eagle would have been chosen if not for the fact that it is distributed across the world. As a native of America that was much more physically attractive than the turkey, the unjust bald eagle was selected by Thomas Jefferson to become the country’s national symbol. 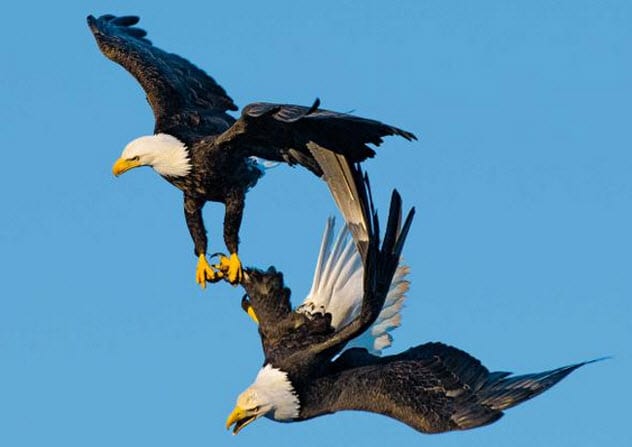 The beauty of the bald eagle is undeniable and never so magnificently expressed as in the daring display of the death spiral. Two eagles clasp their talons together and fall, swinging through the skies until they break off at the last moment.

For bald and white-tailed eagles, the behavior is the ultimate courtship, a vital expression of the health (and romantically, the trust and love) of a mate.[6] Eagles are purely monogamous and, unlike other birds in “monogamy,” do not roost with other eagles while away from the aerie.

Sharing a loyal monogamy, bald and white-tailed eagles have another household trait in common: massive multigenerational aeries. Built in the trees as usual, these nests accumulate through reuse over generations of descendants. One white-tailed eagle home in Iceland has existed for 150 years, and the weight of a 1,814-kilogram (2 ton) bald eagle nest is enough to crunch a tree (and, unfortunately, fall off). 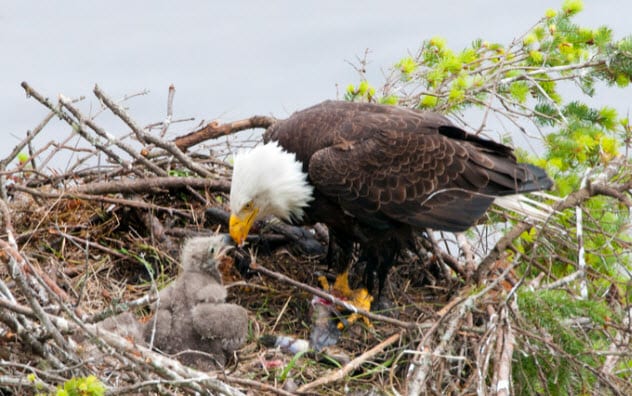 Once the lifetime partner is chosen and the home is built (or perhaps, refurbished), eagles lay between one and five eggs. One parent is present nearly all the time and is extremely protective.

However, the greatest threat is within the nest itself and it is one that the parents let naturally play out. The fluffy eaglets hold a vicious, dark secret. It is common for an older eaglet, generally female due to its larger size, to kill its sibling. Nothing is done to stop the fittest from demonstrating their fitness.[7]

But why are females larger than males across all eagle species, demonstrating the rare reversed sexual size dimorphism in birds? Nothing is conclusive, but the standing explanations are that the larger size is more useful in assisting the maternal instinct for nest building, incubation, protection, and (albeit unnecessary) defense from the male.

Meanwhile, the male partner is faster and more agile in his hunting due to his lighter weight and size. 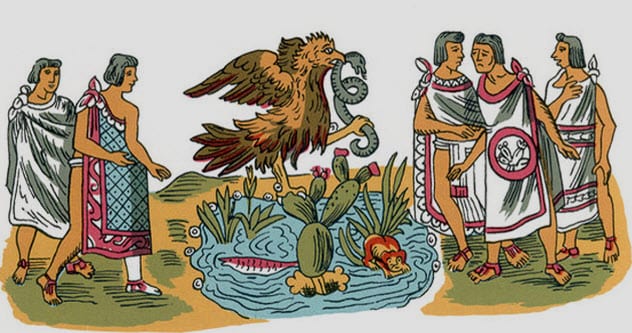 Eagles have made themselves into the mythology of mankind as well as its history. The legend of the thunderbird, a giant magical bird controlling the thunder and lightning of a storm, is thought to have originated from the sighting of an eagle riding storm winds.

In the famed Middle Eastern story of Sinbad the Sailor, the massive roc is plausibly based on the existence of two animals: the now-extinct Malagasy crowned eagle and the elephant bird, cousin of the moa.[8] The presence of the 2-meter (7 ft) eagle and the giant eggs of the elephant bird were likely exaggerated to the epic proportions of the roc.

Founder of an empire, the eagle is also respected in the origin of Tenochtitlan, the capital of the Aztec Empire. The myth is that an eagle perched upon a cactus and preyed on a snake, signifying to travelers the place of their settlement. It would later become the most powerful empire in Mesoamerica.

Representing various sky gods, most notably the Greek god Zeus, the eagle captured the imagination of past peoples as both a noble king and a thunderous force to be reckoned with. 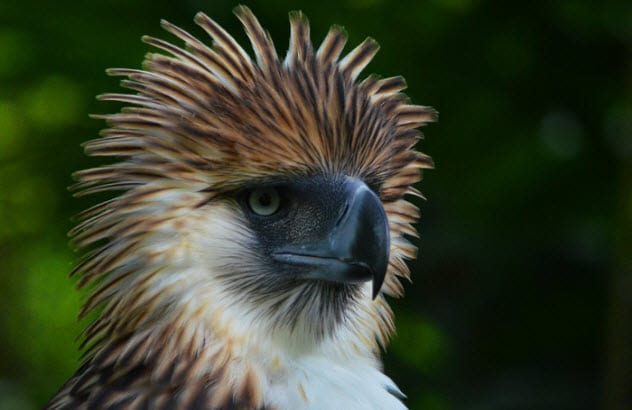 Nations across the world looked to the eagle for symbolic representation, with eagles of all species honored as 18 national birds and in 25 national coats of arms. However, their previous mythical prestige fell to the materialism wrought by the Industrial Revolution.

With guns available and livestock to protect, people shot down eagles as a nuisance predator. As an example, from 1917 to 1953, more than 100,000 bald eagles were killed because they were falsely perceived as a threat by Alaskan salmon fishermen.

Fortunately, since then, laws have been made worldwide in defense of eagles, with fines up to $250,000 for American bald and golden eagles. Violations of the Bald and Golden Eagle Protection Act are literally down to the feather, with possession warranting arrest.

Injuring or killing a Philippine eagle, a critically endangered, monkey-eating apex predator endemic to its namesake, could involve punishment of up to 12 years in jail and a 1-million-peso fine. “Unfortunately, one person with a gun thinks he can shoot anything,” the Philippine Eagle Foundation states after an eagle previously rehabilitated from a shot was found shot dead later on.[9]

We hope that people shall continue to become more informed and respect eagles as well as the rest of nature. 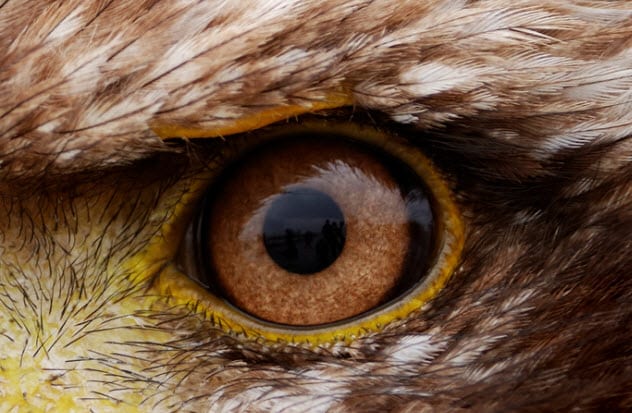 No description of the eagle is complete without mentioning its outstanding vision, a requisite for excellent talon-eye coordination. Seeing four times farther than our view, as the most accomplished birds of prey, eagles boast 20/4 vision and 100x better night vision.

They are even able to see ultraviolet light for detection of UV-reflecting urine from prey. Living thousands of feet in the air and swooping down at hundreds of miles per hour for a swift, accurate kill, eagles are animals of perfect precision. When they see what they want, they fearlessly look to strike.

As noted in the Encyclopedia of Life, “They have at least one singular characteristic. It has been observed that most birds of prey look back over their shoulders before striking prey (or shortly thereafter); predation is, after all, a two-edged sword. All hawks seem to have this habit, from the smallest kestrel to the largest ferruginous—but not the eagles.”[10]

Damian Black is an American nationalist interested in perfection and happiness. Visit his nascent personal site: The Black Decree.