These days, we tend to think of poets as gentle, romantic creatures with a penchant for fluffy clouds and flowers. But it hasn’t always been so.

In earlier times, some poets had wild pasts, with debauchery, alcohol, drugs, incest, and even murder providing the background to their lives and the material for their poetry. And who knows, maybe today’s poets are just as wild and are keeping their mouths shut. Very wise. 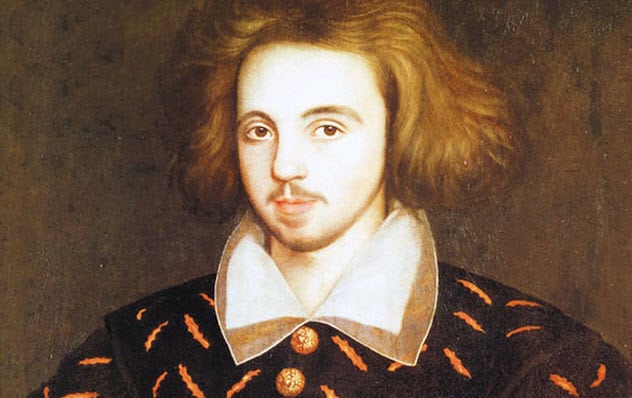 Christopher Marlowe was born around 1564 in Canterbury. A gifted student, he received a scholarship to Cambridge. The university was concerned about his frequent absences and considered withholding his master’s degree. Then someone in Elizabeth I’s government wrote to them to say that Marlowe had been employed “on matters touching the benefit of his country,” which was code for being a spy.

Quite a few scholars have claimed that Marlowe authored many of Shakespeare’s plays, and it now seems certain that some of those plays are at least based on Marlowe’s work. He has been given coauthor credit for the three plays on the life of Henry VI.

Though Marlowe was murdered at age 29, it is fair to say that he had lived a full life. He was caught using counterfeit money to buy secrets from conspirators in a plot to kill the pope and escaped by pretending to be a naive student. He wrote a manuscript which pointed out inconsistencies in the Bible, which could have led to his execution as a heretic. And he liked a fight. Which might have made reports of his death credible.

On May 30, 1593, Marlowe had dinner with Ingram Frizer, another “secret” government employee, in Deptford. A fight allegedly broke out between the two men over the bill, and Marlowe was supposedly stabbed to death.[1]

However, this account has been widely disputed. There are many theories about what happened, including that he faked his own death before running away and changing his name to William Shakespeare. 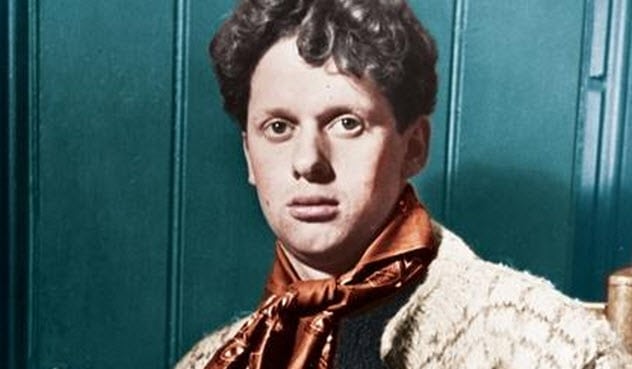 Dylan Thomas was born in Wales in 1914. He was known for his beautiful poetry and plays such as Under Milk Wood. Always poor, he struggled to make a living from his writing and often resorted to borrowing money from his wealthier friends.

However, this did not prevent Thomas from living life large. He had a huge appetite for both alcohol and women, though he was married with children. He would borrow the homes of his friends to meet his lovers. He is said to have used his simple Welsh persona to charm women into bed.

Supposedly, Thomas’s last words were: “I’ve had 18 straight whiskies. I think that’s the record!” Then he collapsed in a bar in New York. He died several days later. His death certificate gave the cause of death as pneumonia, though it is believed that the alcohol he consumed may have played a part.[2] 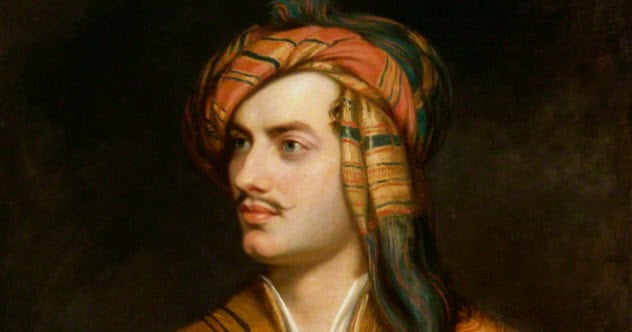 Born George Gordon Noel, sixth Baron Byron, in 1788, Lord Byron is perhaps the ultimate badass poet. He was once described by Lady Caroline Lamb as “mad, bad, and dangerous to know” because of his outrageous private life.

He had an army of devoted female admirers who would send him letters requesting locks of his hair or offering him secret trysts. He was said to have been pursued all over Europe by women desperate to become his lover. They may not have been so keen if they had known that he had almost certainly sired a child with his sister.[3]

His exploits with women were not the end of his daredevilry. While a student at Cambridge, Byron kept a tame bear in his room and would take it for walks around the quad on a lead.

He had a noticeable limp as a result of his clubfoot. But this did not prevent him from swimming the Hellespont, the stretch of water between the Black Sea and the Aegean, which Leander swam nightly to reach Hero in Greek mythology. The swim was around 4–5 kilometers (2.5–3.1 mi) long in freezing water, and Byron was said to have completed it in an hour and 10 minutes.

At the time of his death, Byron had traveled to Greece, where he was preparing to fight in the war of independence against the Ottoman Empire. His death was mourned throughout Britain, and his body was brought back to England. Denied a crypt in Poets Corner at Westminster Abbey because of concerns about his morality, he was buried at his ancestral home. His funeral was attended by thousands. 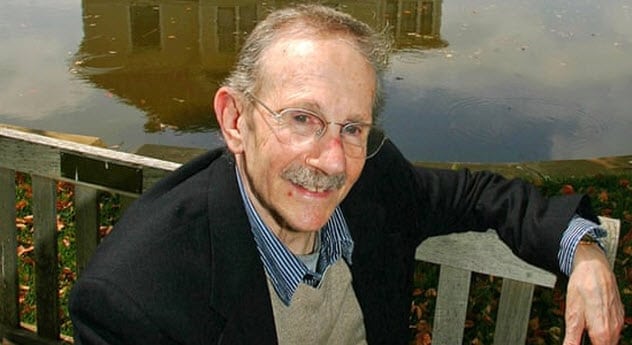 Philip Levine was born in Detroit and brought up during the Great Depression of the 1920s and ’30s. His father died when he was five. From age 14, he took a number of factory jobs, including at a soap factory that was compared to a concentration camp in one of his poems. His verses were largely about working people, and he has been called the “poet of the night shift.”

As an amateur boxer, he supposedly got into a fight once with actor John Barrymore in a Los Angeles club. When asked if the fight was real, Levine said only that Barrymore “started it.”[4] 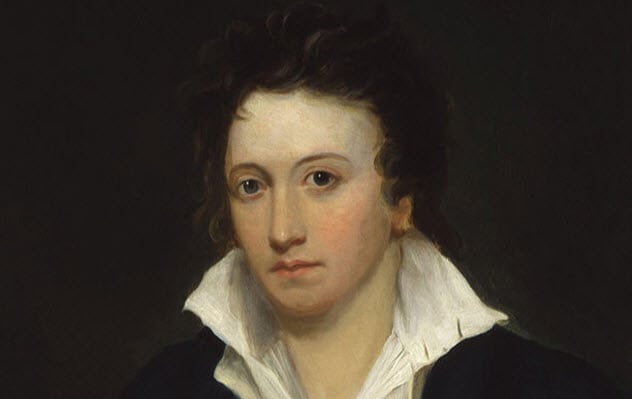 Percy Bysshe Shelley was a romantic poet and a rebel. His first act of rebellion was to get himself expelled from Oxford University for contributing to a “notorious” pamphlet called The Necessity of Atheism. Shortly afterward, he eloped with Harriet Westbrook, a 16-year-old girl. Shelley had two children with Harriet before he left her.

In 1814, he fell in love with Mary Wollstonecraft. Shelley married her in 1816, just weeks after his first wife had conveniently drowned.

On August 8, 1822, he drowned off the Italian coast while sailing his boat, the Don Juan. One newspaper published: “Shelley, the writer of some infidel poetry, has been drowned. Now he knows whether there is God or no.”[5]

Which seems a little harsh.

Shelley was cremated, but his heart, it is said, refused to burn. It was given to his wife, Mary (she of Frankenstein fame), who kept it in her writing desk. It was found among her possessions when she died. 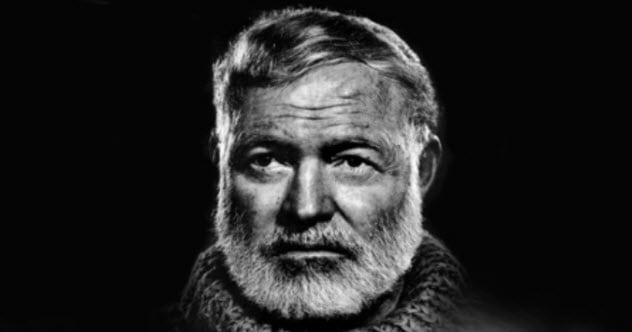 Everyone knows that Ernest Hemingway was a “proper” man. Keen on big game hunting, deep-sea fishing, and bullfighting, he was a volunteer in an ambulance unit in Italy during World War I and a newspaper reporter during the Spanish Civil War. Supposedly, he also liberated the Ritz Hotel in Paris from the Nazis.

The Old Man and the Sea, the novel for which Hemingway won the Nobel Prize, dramatized the struggles of an aging man landing a big fish. (Spoiler alert: The fish lost.)

Hemingway was also a legendary drinker. He drank frozen daiquiris in Havana and martinis in Key West. He even invented his own drink, a mixture of absinthe and champagne, which he named Death in the Afternoon.[6] 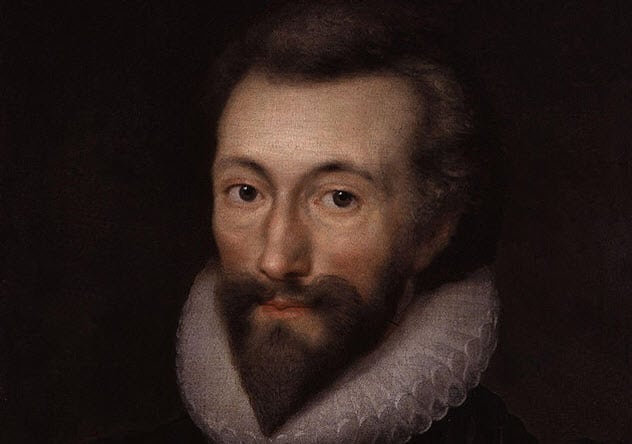 Born in 1572 in London, John Donne became the dean of St. Paul’s Cathedral, which doesn’t sound like he was much of a dude. However, Donne was a complicated man. After leaving education, he got a job as an assistant to Sir Thomas Egerton and secretly married his niece. When the marriage was discovered, Donne was sacked and briefly imprisoned.

It is fair to say that Donne was a man of passion. He wrote poems such as “To His Mistress Going to Bed” which were described as “indecorous,” a polite way of saying shamelessly indecent. Yet Donne is often considered the greatest love poet in the English language.

He was also a pirate. In 1596, Donne enlisted with the Earl of Essex’s privateering expedition against the Spanish at Cadiz. The following year, he sailed with Sir Walter Raleigh and Essex to hunt for Spanish treasure ships in the Azores.[7]

After the death of his wife in childbirth, Donne hung up his bad-boy hat and, in 1615, became a priest. He subsequently became a royal chaplain and then the dean of St. Paul’s. 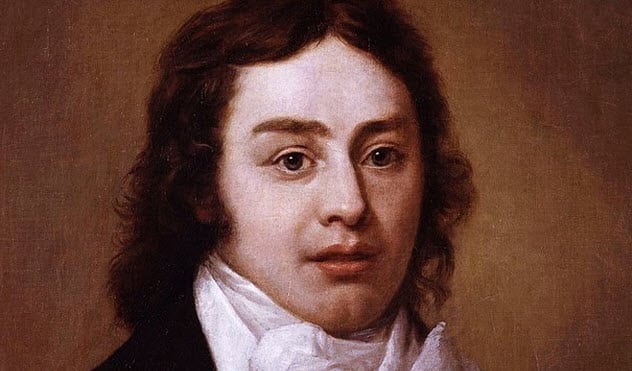 Poet Samuel Taylor Coleridge was a cofounder of the Romantic Movement along with his close friend William Wordsworth (of the clouds and daffodils). Coleridge spent much of his adult life addicted to laudanum and opium.

His most famous works, “The Rime of the Ancient Mariner” and “Kubla Khan,” were written under the influence of drugs. “Kubla Khan; or, A Vision in a Dream: A Fragment” was part of a much larger poem that came to Coleridge in an opium-induced dream. Upon waking, he began to write it down. But he was interrupted and forgot the rest of the lines.

Coleridge spent most of his life broke. When he was at Cambridge, his financial situation became so desperate that he enlisted as a cavalry soldier under the assumed name of Silas Tomkyn Comberbache. Despite being completely unsuited to military life, he remained there until discovered by his friends, who sent him back to the university.

Soon after, he tried to start a kind of utopian society in Pennsylvania. Later, in Bristol, he was persuaded to marry a woman he didn’t care for. His drug use became more problematic as he hid himself away (from his wife) and fell in love with the sister of Wordsworth’s future wife.[8]

Coleridge died in 1834. Aptly enough, his remains were rediscovered in a wine cellar in early 2018. 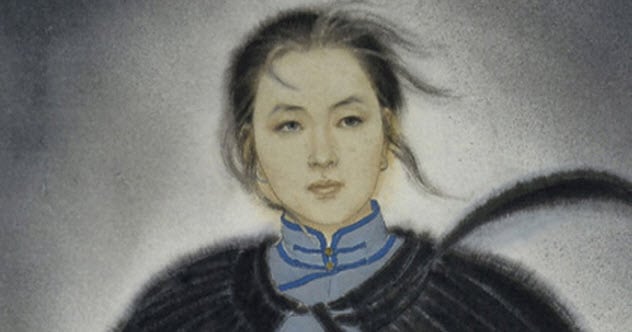 Qiu Jin was a Chinese feminist, revolutionary, and writer who is considered a national heroine in China. Her nickname translates to “Woman Knight of Mirror Lake.” She is also called “China’s Joan of Arc.”

Qiu was born into a wealthy family and had many privileges. However, she was also forced to bind her feet, learn needlework, and submit to an arranged marriage. She began to drink and to learn sword fighting in private.

In 1904, while dressed as a man, she sold her jewelry for funds and left her husband and children. She moved to Japan and joined anti-Manchu secret societies to work for revolution at home.

She was said to be skilled as a horse rider and warrior and was well-practiced in martial arts. She wrote feminist poetry about the evils of foot binding and was known to use revolutionary rhetoric.[9]

On July 15, 1907, she was beheaded at age 31 by the Chinese Imperial Army. They charged her with conspiring to overthrow the Manchu-led Qing government. 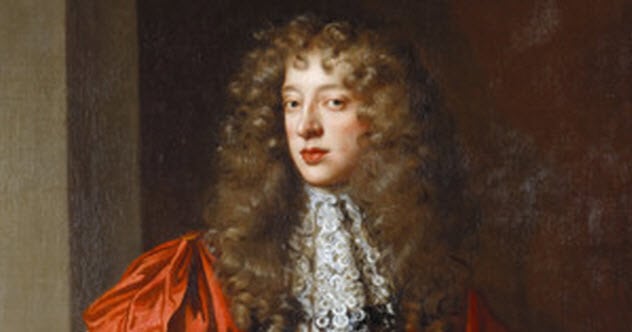 It is fair to say that John Wilmot, 2nd Earl of Rochester, was a bit of a scoundrel. His writing not only verged on pornographic, it crossed the line completely.

His work was almost entirely about sex, which perhaps explains why he died of syphilis at the ripe old age of 33. However, his appetite for sex was matched only by that for alcohol. At one time, he was suspected of being responsible for a brutal attack on poet John Dryden, who was set upon in the street and beaten almost to death by persons unknown.

Despite this, Rochester was something of a favorite of King Charles II. Samuel Pepys wrote in his diary that it was “to the King’s everlasting shame to have so idle a rogue his companion.” Rochester did not return the king’s favor. He wrote “A Satire on Charles II” in which he made scathing jokes about the size and usefulness of the king’s “weapon” and his talent as a swordsman.

It was an act of such great offense that the king would have been entitled to have him executed. Instead, Charles settled for banishing Rochester from his court. Rochester was forced to go home to his wife, whom he despised.[10]

Read about more badasses of literature on Top 10 Badasses of Classic Literature and 10 Poets Who Were Completely Mad, Bad, And Dangerous To Know.