If you visit any of the famous seats of government or palaces around the world, you’ll inevitably be confronted by portraits of kings, queens, and presidents from history. Most of them are austere, commanding images of imposing figures—for such portraits are primarily propaganda for the individual captured on canvas.

More often than not, these portraits are painted in traditional manners. But occasionally, some of these pictures spark controversies, raise eyebrows, and even cause major diplomatic rows. Below is a list of portraits of heads of state and government leaders which have become famous (or infamous) for some very curious and interesting reasons. 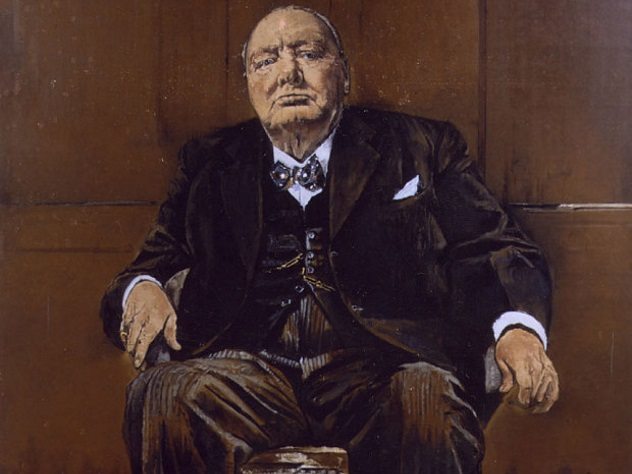 Graham Sutherland’s famous (or infamous) portrait of Winston Churchill was commissioned in 1954 by the House of Commons to mark the former prime minister’s 80th birthday. It depicts the wartime leader scowling and slumped in a chair against a murky background.

The painting was unveiled it at a ceremony at Westminster Hall attended by Sir Winston and his wife, Lady Churchill. Acidly, Churchill described the portrait as “a remarkable example of modern art,” to the laughter of the assembled audience. It was supposed to hang publicly, but the government gave it to Churchill as a private gift.

Lady Churchill loathed the painting. Fiercely protective of her husband’s reputation as a revered war hero, she thought it projected the wrong image. She hated it so much that she and her secretary, Grace Hamblin, burned it.[2] (Obviously, copies of it exist.) Sutherland, quite understandably annoyed, described its destruction as act of vandalism. He wasn’t wrong.

Interestingly, although Sir Winston and Lady Churchill both despised the portrait, Lady Churchill admitted that Sutherland had captured his likeness, saying it was “really quite alarmingly like him.” 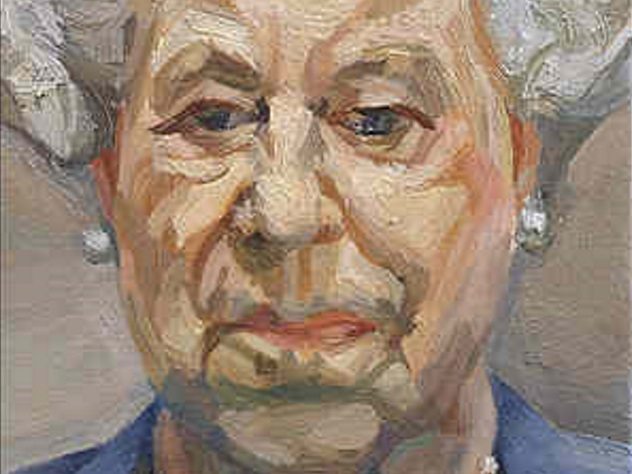 Queen Elizabeth II has sat for countless portraits over the years. Most project the majesty of being a queen, while others try to emphasize the woman who wears the crown. When artist Lucian Freud was given the opportunity to render the queen in 2001, he produced a work of art that was so controversial that newspapers called it a “travesty.”

Painted in Freud’s idiosyncratic style, the harsh colors and almost brutalized depiction of the queen were certainly unflattering. The monarch’s expression is cold, and her features appear to be almost burdensome.

While some dismissed the portrait as being so bad that the artist should have been locked up in the Tower of London, others came to Freud’s defense. The director of the National Portrait Gallery in London, Charles Saumarez-Smith, called it “thought-provoking and psychologically penetrating.” The chief art critic of The Times described it as “painful, brave, honest, stoical and, above all, clear sighted.”[2] 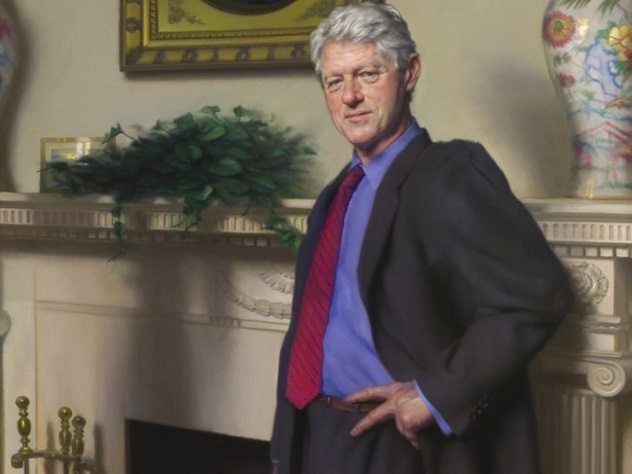 Nelson Shanks, the famed portraitist who has captured Princess Diana, Pope John Paul II, and Ronald Reagan, was tasked with painting Bill Clinton in 2006. Responsible for a revival of classical realism in portraiture, the portrait of Clinton was not deemed particularly controversial at the time of its unveiling.

Fast-forward to 2015, and Nelson Shanks admitted that he included a subtle reference to Monica Lewinsky while he was painting it because, “The reality is he’s probably one of the most famous liars of all time. He and his administration did some good things, of course, but I could never get this Monica thing completely out of my mind and it is subtly incorporated in the painting.”

So where is the reference in the work of art? Well, if you look closely, you can see a shadow cast over the fireplace. Apparently, this is an allusion to the infamous dress Monica Lewinsky wore during one of their liaisons.[3] 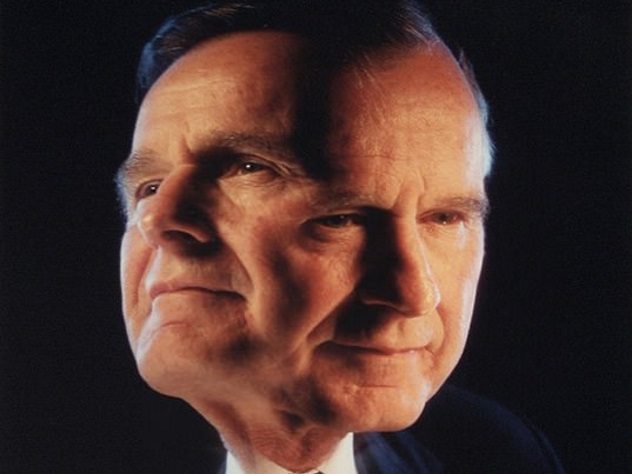 Gregory Heisler has produced dozens of photographs that have graced the cover of Time magazine, but one of his pictures in particular caused quite a stir back in 1990. A double exposure, it depicts President George H.W. Bush as having two faces. The photograph was chosen for the magazine’s Man of the Year feature.

Some critics saw an artistic justification for the double exposure. Bush had achieved some success in his foreign policy regarding Iraq, but he had not enjoyed the same degree of domestic triumph. Artistically understandable or not, the image was undoubtedly controversial and more than a little unsubtle in its choice to show the president as literally two-faced.[4]

The White House was not amused by the portrait, and Heisler’s press credentials were temporarily revoked. 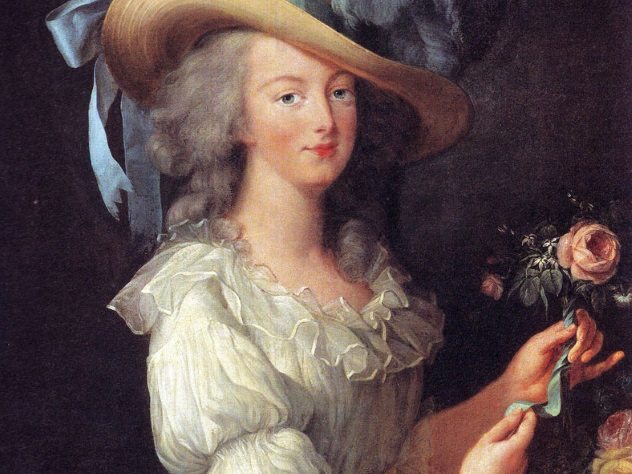 In the 18th century, there was pretty much only one way to commit the image of a king or queen to canvass—the artist was obliged to portray majesty, power, and authority. So when Madame Vigee Le Brun, famous female artist and close friend of the French queen, took up her brush, she caused a scandal by painting Marie Antoinette in a simple muslin dress. To modern eyes, there is nothing scandalous about this at all, but back then, being painted in your chemise was akin to be depicted in your underwear.

The queen herself was delighted with the portrait. At the time it was painted, Marie Antoinette was abandoning the ornate and extravagant court gowns which had unfairly given her a reputation of profligate spending while the people suffered.

Moreover, the queen displayed acute political understanding of vanity during the sitting. Vigee Le Brun had suggested that Marie Antoinette dispense with the usual hairstyle and powder worn by aristocrats at the time, but the queen rejected this on the grounds that she didn’t want people thinking she was trying to disguise her large forehead.[5] 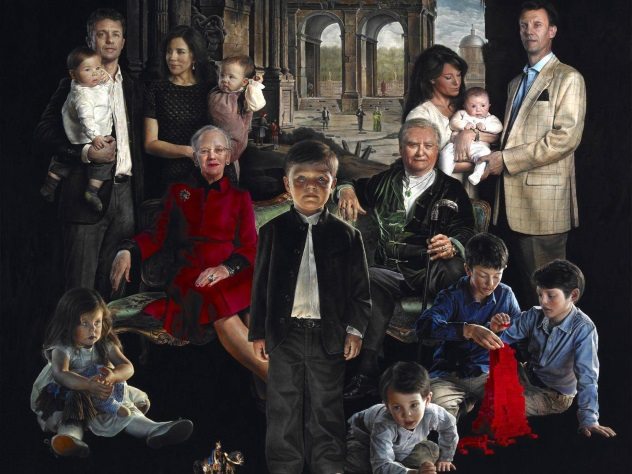 It’s not just the British or French royal families who have been portrayed controversially on canvas. The Danish royals have also suffered, too. When Queen Margrethe II commissioned a work to mark the 150th anniversary of the House of Glucksburg sitting on the Danish throne, painter Thomas Kluge was given the job.

However, the family portrait he produced has been described as downright creepy. It shows the monarch and her heirs looking directly at the audience, while most of the children occupy themselves with dolls and Legos. But in the center of the image is Prince Christian, second in line to the throne, staring almost demonically out from the canvas, bathed in dark shadows like Damien from The Omen.[6]

Kluge expressed surprise at the response to his work and said that he was trying to place the royal family within the context of the modern democratic state and added, “This is satire.” Charitably, Queen Margrethe approved the portrait, but she kept her private feelings about it to herself. 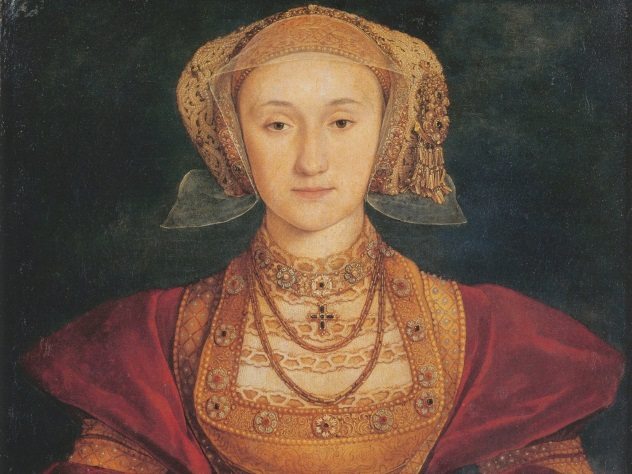 Henry VIII’s quest to find a wife was a troublesome one. He divorced the first and cut the head off the second, and the third died in childbirth. In 1539, the king started searching for a fourth wife. He dispatched his court painter, Hans Holbein the Younger, to Cleves to paint Anne and her sister with the instructions that he was not to flatter the princesses.[7] When Henry inspected Holbein’s efforts, he was pleased and proceeded with negotiations for Anne’s hand.

However, when Anne arrived in England, Henry was disappointed with what he saw, claiming, “She is nothing so fair as she hath been reported.” He tried to get out of the marriage, but it went ahead. Their union was never consummated.

Henry proposed an annulment, and Anne astutely agreed to it. In gratitude, the king granted Anne estates, money, and the title of the King’s Beloved Sister. She not only outlived her former husband but his numerous wives, too. 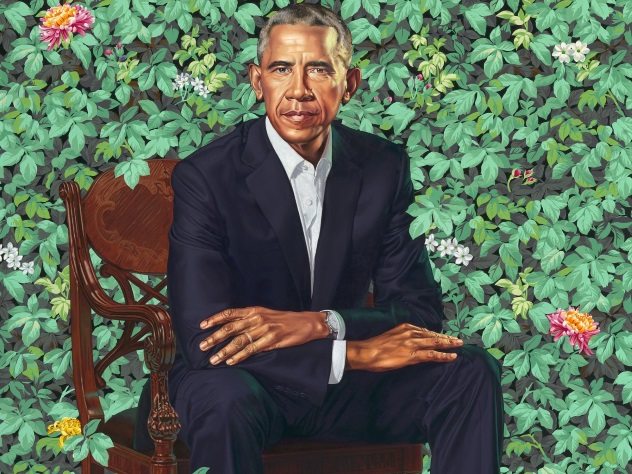 The most recent portrait on our list, the official presidential portrait of Barack Obama, was revealed at the National Portrait Gallery in Washington, DC, in February 2018. The artist, Kehinde Wiley, unveiled a rendering of the first African American US president seated before a backdrop of thick, green foliage. While the pose is not terribly controversial, eyebrows where nonetheless raised when it was suggested that the artist had secretly included sexual imagery in the portrait, namely that he’d painted a sperm cell on Obama’s head.

It was an observation perhaps better left to the eye of the beholder, but possibly even more troubling than Wiley’s supposed secret semen is the fact that the artist has a history of painting portraits of black women carrying the severed heads of white women. Quoted in New York magazine in 2012, Wiley said that these portraits were a “play on the ‘kill whitey’ thing.”[8] 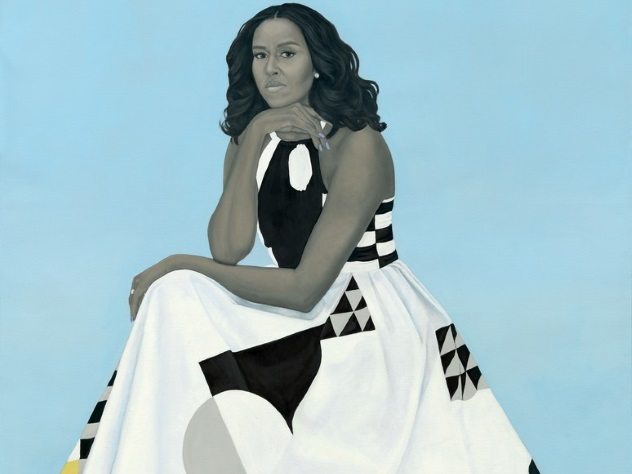 Immediately after the portrait of Barack Obama was unveiled, a second artist revealed her own portrait of the former president’s wife, Michelle. It proved equally as eyebrow-raising. Amy Sherald painted the former first lady seated, dressed in a floor-length gown and sporting an elegant, calm expression.

The only problem was that the woman Sherald painted arguably doesn’t look like Michelle Obama. Art critic Holland Cotter was disappointed, saying, “I was anticipating—hoping for—a bolder, more incisive image of the strong-voiced person I imagine this former first lady to be.”[9] Moreover, the portrait seemed to focus more on what Michelle Obama was wearing rather than the woman herself. The bold, geometric design of the gown takes up almost half the picture and draws attention away from the woman.

Despite the controversies surrounding the portraits of the former president and first lady, they nonetheless have sparked a conversation about art and artists, and that is surely a good thing. 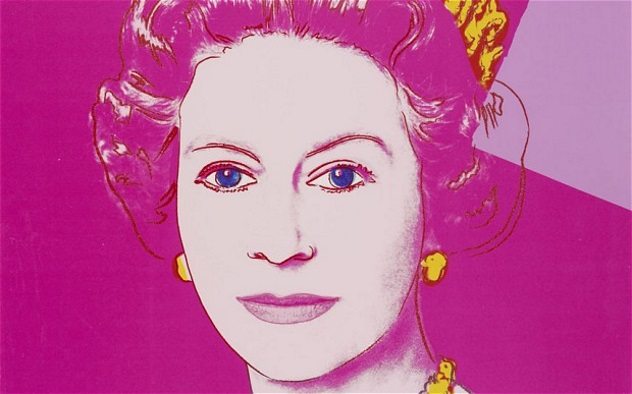 Given that Queen Elizabeth II has reigned for more than 60 years, you’d expect there to be quite a few portraits of the monarch, as alluded to above. Some have been more successful than others, but few have been as widely disseminated as those of Andy Warhol.

The famous artist created the Reigning Queens series in 1985, and his prints of the British monarch quickly became the most well-known. Using his screen printing process, Warhol placed the queen in a contemporary pop art setting, turning her into a pop icon and not just a revered royal.

While at the time, this might have been considered controversial, time and art values have meant that the subject of the portraits herself—the queen—recognized that owning a Warhol was a good investment. She bought the prints in 2012.[10]

R J Kennedy is a writer and filmmaker. He lives in the UK.