North American history is riddled with strange animal and so-called monster encounters. The mysterious woods, plains, swamps, and mountains hid mysteries that preyed on people’s minds and fueled the legends and stories told around family hearths.

Monster sightings were as popular in the 1800 and early 1900s as they are today. However, instead of posting their sightings to social media accounts, the people of the past went to the newspapers, where their stories were published and immortalized. And, of course, that means they can still be read today. The idea of aquatic or amphibian men is nothing new. Since antiquity, people have been spotting these strange creatures across the world. However, a more recent sighting from 1902 happened in North America.

According to one newspaper report, a half-man, half-frog creature came out of Colonial Lake, a tidal pond in South Carolina. It was late at night, and witnesses said the curious creature crawled onto the bank and began making strange sounds. They may have been distress cries, according to some accounts, but after about 30 minutes, the creature returned to the water.

The event was witnessed by a truck driver, a carpenter, and numerous other people who were out late that night. According to a statement made by the carpenter:

It was too horrible looking to describe. The head resembled that of a huge frog, the wide, protruding eyes burning with a lurid light. It had arms and shoulders like a man, but the body tapered down like a serpent’s. It was covered with large, greenish scales, and I should say it was at least eight feet long from head to tail. Its mouth was filled with crooked fangs, which it snapped together with a vicious click.[1] Wildcat sightings, as well as black panther sightings, have always been a popular topic in newspapers, but this particular sighting in Slick, Oklahoma, was a bit different from those other wildcat stories.

It was during the summer of 1921 when people began seeing an unusual wildcat. According to one report, “The monster was seen [ . . . ] by a woman and two children who were picking dewberries in a swamp at the top of a hill on the outskirts of the city. It spat fire, snarled fiercely and gave a weird howl when it beheld the trio, disappearing in a sudden burst of speed and green smoke.”[2]

A local reporter and scientist headed to the swamp to find the spitfire cat. The scientist made impressions of the cat’s large, unfamiliar footprints and muttered, “Wildcat, but not still.” The reporter wanted to follow the tracks to find the cat, but the scientist was quite unwilling to go any further. 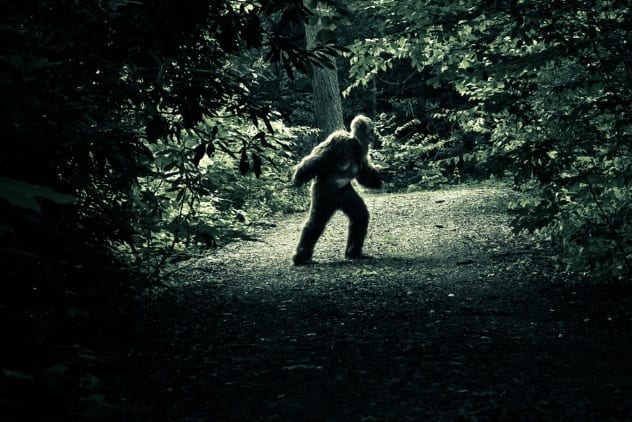 Long before the creatures were called “Bigfoot,” there were strange sightings in the mountains of Georgia. An early account from the summer of 1812 tells how a party of hunters came across a 2.4-meter-tall (8 ft) man-creature. It was covered in bluish hair and had large ears, similar to the ears of a donkey.[3]

Two years later, a group of adventurers from Virginia decided to try and find the mysterious man-monster. As they traveled across the undeveloped land, they spoke to numerous locals who either believed that the hairy man existed or had seen the creature themselves. Fortunately for the monster, the party of men were unable to locate its dwelling.

To this day, hikers and Bigfoot researchers claim to have seen or heard the mysterious monsters that live in Georgia. A post trader visited the Ute people in Eastern Utah back in 1889 and began talking to them about their culture, raising children, and the local industries. Soon, the conversation moved onto local superstitions, and the trader, who was accompanied by a local newspaper reporter, was told about the Duchesne River monster.

According to the Ute, there is a spot near the head of the Duchesne that was inhabited by “a horrible monster, half man and half beast, with all the powers of an evil spirit.”[4] The monster lived in the valley, and the locals all avoided venturing into the area, believing that the creature would kill them if it caught wind of them.

Of course, instead of believing the Ute, the reporter felt that perhaps the people were confusing the half-man monster with the Gila monsters of Arizona. However, this makes very little sense because Gila monsters were recognized as animals, not actual monsters, among Native American tribes. New York state had its own unique monster problems in 1891. Residents near Gravesend Beach claimed they saw a devil of sorts and described it as a “monster all covered with hair, with flailing red whiskers and a Satanic howl.”[5] People were frightened out of their wits, and it was reported that women and men were staying indoors instead of venturing out at night.

Unionville was also being terrorized by the Red-Whiskered Devil. One night, a train dispatcher saw the strange creature, and, he said, it “gave a roar like thunder, grinned in a most ghastly manner and then started off.” The train dispatcher said that since he did not believe in ghosts, he decided to chase after it. Holding a monkey wrench, the man followed the creature for 3.2 kilometers (2 mi). Then it disappeared right in front of him so suddenly that the man gasped in fear.

Afterward, numerous people came forward to say they had seen the creature. While the witnesses were described as intelligent, one newspaper report ventured to say that the creature was more than likely a man dressed in a bear suit, scaring residents for his own personal thrill. There was something rather alarming running around Virginia. In 1882, it was reported that a large number of people had spotted a half-man, half-beast creature in the Petersburg area. People were so frightened that they were requesting police escorts whenever they had to travel the neighborhood at night.

Three years later and over 160 kilometers (100 mi) away, the people of Lynchburg, Virginia, had similar sightings. In this case, the monster was described as being half-man and half-dog. It was spotted chasing after children, who believed that the monster was out to eat them.[6]

In both of these cases, newspaper reports touted that the stories of the dog-man were told by superstitious, uneducated people. No other theories were given as to what the creature or creatures could have been. However, dog-man sightings continue today in the state of Virginia. It was a cold winter in Chesterfield, Idaho, in 1902. The young adults, eager to socialize and spend time outdoors, went to the local river and put on their skates.

As they skated across the river ice and gossiped, a strange figure appeared. It was 2.4 meters (8 ft) tall, covered in hair, and carrying a club. The man-like creature let out strange yells, and the young people made a mad scramble to their wagons. They escaped, unharmed.

After reaching their little town, they told their parents and neighbors what they had seen. It wasn’t long before the older adults returned to the scene. There, they discovered footprints that measured 56 centimeters (22 in) long and 18 centimeters (7 in) wide. The creature had only four toes on each foot.[7]

As people began to talk among each other, they found out that similar prints had been discovered in the past, albeit further down the river.

3 It Turned Itself Inside Out Something rather odd was plaguing the cattlemen of Bloody Basin, Arizona, back in 1913, and there were reports of men selling out, packing up, and leaving the area just to avoid whatever it was.

According to one witness, he and two other cowmen were crossing the hills when they saw a strange-looking creature ahead of them. The men were so frightened by it that they emptied their guns into the thing.

It was no use. According to the account, the beast was unharmed:

Quick as a flash it wriggled and one side actually went through the other. In other words, it turned wrong side out, reversed, revamped itself, reorganized, changed its general plan and specifications, so that the long legs moved over to the side just occupied by the short ones. Then, with a roar and a swish of the tail it fled back around the hill.[8]

Arizona continues to offer up strange creature sightings, as well as UFO sightings and Bigfoot. A strange creature was seen in Springvale, Pennsylvania, back in 1910. Locals called it a devil, and it was likened to the Jersey Devil, which had been acting up in the Pine Barrens again.

William Smuck, a local of Springvale, saw the creature firsthand and said it sort of looked like a large dog, but it had hind legs shaped like those on a kangaroo. Other people who saw it likened its fur to porcupine quills, but no one was brave enough to stick around for a closer look whenever it showed itself.

After the creature had been accused of tearing apart a local dog, people were afraid to go out at night. When they had to venture out, they would do so in groups, and many people began carrying shotguns and rifles with them.

According to the locals, the devil creature was ferocious. It moved like a panther, was fast, and hunted among the local farms.[9] While people in other parts of the US dismissed Virginians as superstitious, the Virginians themselves were having a terrible beast problem back in 1902. This is not surprising, since 20 years prior to this latest incident, Virginians were having problems with a dog-man.

According to old newspaper reports, something came out of the Dismal Swamp area and began eating people’s dogs and livestock. The creature, said to have had eyes that glowed in the dark like phosphorous, was hunted down and supposedly killed.

Shortly afterward, however, another Dismal Swamp monster came out of the area to terrorize the neighborhood. A farmer witnessed the strange creature kill seven of his dogs, but when he went after it with a pistol, the creature attacked him and tore his clothing to shreds.[10]

Another neighbor saw the creature. He described it as an animal that was larger than a wolf, “with shaggy, yellow hair, long head, and sunken eyes.” About two weeks later, it was reported that the creature had been killed again, but this time, it was described as being similar to a wolf but far larger.

Today, the Dismal Swamp area is often visited by thrill-seekers who want to catch sight of the ever-elusive Bigfoot that has been spotted in the area by numerous eyewitnesses.

Elizabeth is a full-time freelance writer and enjoys researching early American history. When she is not busy digging through newspaper archives, she is usually traveling to historical sites throughout the US.