Visiting a museum is an educational and cultural experience that we all enjoy when traveling. Thousands of museums and galleries around the world display fine arts, precious artifacts, and historical displays.

The Louvre, Tate Modern, Uffizi Gallery, and Guggenheim Museum are just a few of the famous cultural exhibits around the world which draw thousands of visitors each day.

By its very definition, a museum is a building where articles of historical, artistic, cultural, or scientific importance are exhibited. Yet there are also some unique, lesser-known museums around the world. Many grew from a fanatic’s personal collection, while others are just plain weird. 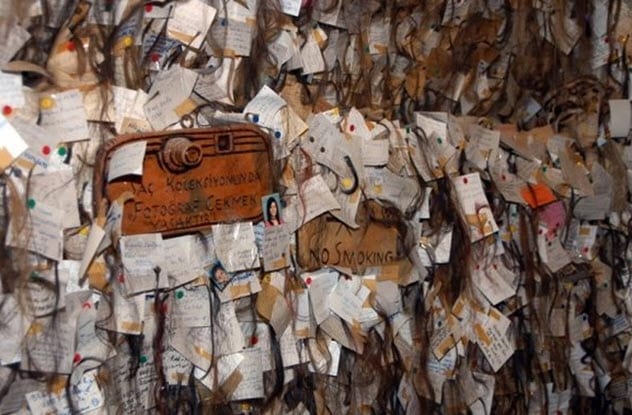 In Avanos, Turkey, you will find a somewhat bizarre museum located beneath a pottery shop. Artist Chez Galip has collected locks from more than 16,000 women and displayed the tresses in his unusual “hair museum.”

Saddened by a friend’s departure from Avanos back in the late 1970s, Galip asked for a remembrance and the woman apparently gave him a lock of her hair in response.

Over the next few decades, he collected locks of hair from visiting females around the world. The multicolored hair samples, tagged with each donor’s name and address, hang from every spare surface within the museum.

Visitors are not obliged to donate their hair to the growing display. However, participants have the opportunity twice a year to win an all-expenses-paid holiday.[1] 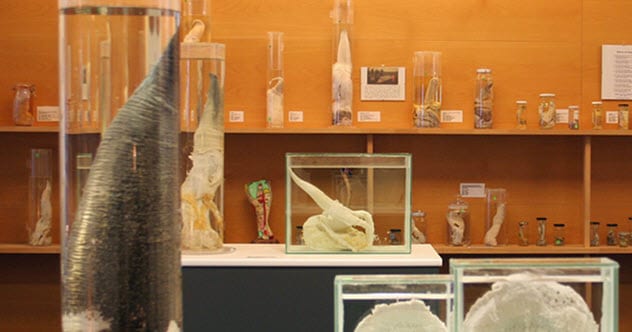 Iceland has a number of museums dedicated to a range of historic and cultural themes. However, the Icelandic Phallological Museum in Reykjavik may well be the weirdest museum in the world. It is dedicated entirely to penises.

According to the official website, it is “the only museum in the world to contain a collection of phallic specimens belonging to all the various types of mammal found in a single country.”

The museum displays over 200 penile specimens from whales, seals, polar bears, and 20 other land mammals. A 170-centimeter (67 in) whale penis preserved in glass is the largest specimen on display. There are also human samples on view. In fact, visitors are given the opportunity to sign up to donate specimens after their deaths.

Among the more unusual artistic displays are lampshades fashioned from bull scrotums as well as toys and utensils related to the museum’s theme.[2] 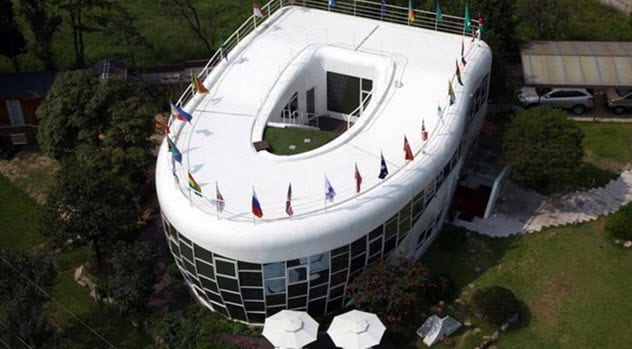 You certainly won’t have difficulty finding the public restrooms in this South Korean facility. Haewoojae is an entire museum dedicated to the history of toilets and sanitation.

Despite the obvious lavatory humor, the museum actually has serious origins. Sim Jae-duck, or “Mr Toilet” as he became known, worked to improve the city toilets during his time as mayor of Suwon City, South Korea. He also aimed to improve sanitation around the world with the “World Toilet Association.”

He even built a toilet-shaped house which was turned into a museum after his 2009 death. The original museum was predominately toilet-themed signage and educational material on the importance of clean toilet facilities.

Since 2012, the museum has expanded to display a history of water closets, squat toilets, and public urinals from around the world.[3] 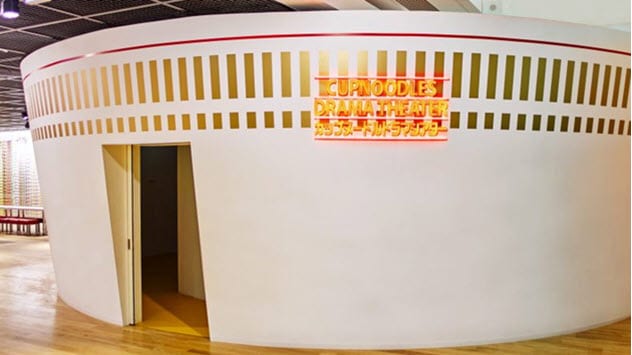 Cup noodles are seen as a rather boring foodstuff that is traditionally eaten by poor students trying to pay their way through college. With over 100 billion servings of instant noodles consumed globally each year, it probably isn’t surprising that a cup noodles museum exists.

In Osaka, Japan, you can visit a museum entirely devoted to the 60-year history of such noodles. The Momofuku Ando Instant Ramen Museum tells the history of instant noodles from the first Chicken Ramen noodles in the 1950s to the many varieties available today.

Exhibits include a re-creation of the inventor’s work shed where the first cup noodles were developed as well as displays of noodles sent into space to feed astronauts. The “Instant Noodles Tunnel” displays packaging from over 800 varieties of noodles, providing a great “selfie” opportunity for ramen lovers.

Visitors even have the opportunity to attend a workshop to create and package their own variety of ramen noodles.[4] 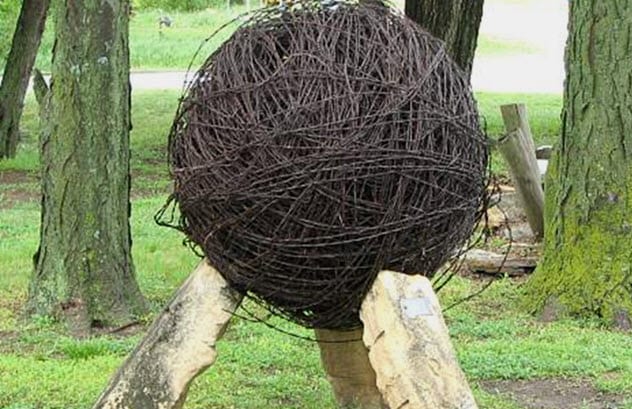 Travel through any rural area in the world, and you are likely to find stretches of barbed wire fencing surrounding properties. You may expect to find samples of this spiky fencing wire in an agricultural museum.

Yet in La Crosse, Kansas, you will discover an entire museum dedicated to barbed wire. You’ll be amazed to find over 2,400 versions of barbed wire on display there.

The museum covers the history of barbed wire from its invention during the 1870s to help protect holdings in America’s Midwest to its uses during the war years and in modern fencing applications.

You can also explore exhibits of fencing tools and equipment. A whole museum dedicated to fencing wire may sound uninteresting. However, the impact of this basic fencing material throughout its history makes for a fascinating display.[5] 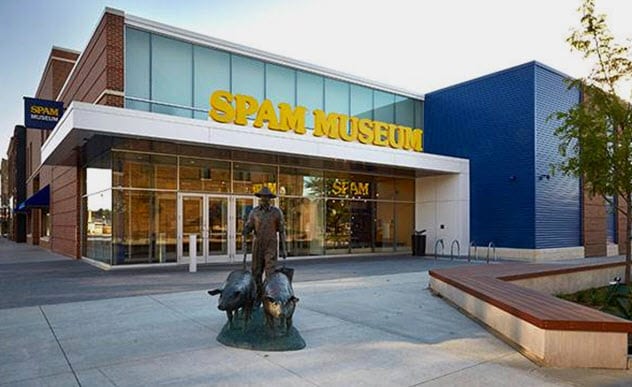 Many of us shudder at the thought of eating “Spam,” the highly processed tinned pork that Hormel Foods first introduced to the US market in 1937. While the long-life convenience food certainly had its place as a staple for troops during World War II, the square tin of meat has become a much-maligned product in more recent years.

Yet there is actually a Spam Museum in Austin, Minnesota. Hormel Foods first established a small museum in a mall in 1991 before moving to a bigger, more accessible site in recent years.

Here you can learn the history of Spam production and its role during the war years. You can even taste Spam varieties. Yes, there are different types sold throughout the world. Visitors can even pick up some Spam recipes for their next dinner party.[6] 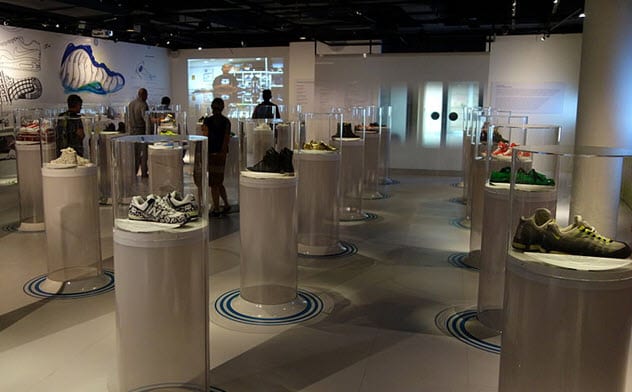 Shoe collecting has been a popular female hobby for centuries. From basic “flip-flops” and sandals to elaborate fashion footwear, the humble shoe is something most of us wear daily.

In Toronto, Canada, you can actually enter a shoebox-shaped museum to explore the history of footwear. The wife of Bata Shoe Company founder Thomas Bata outdid even Imelda Marcos’s infamous shoe collection.

Sonja Bata began amusing herself by shopping for shoes when accompanying her husband on business trips. Her collection started back in the 1940s. By the 1970s, it had outgrown their home, so the Bata Shoe Museum was established in 1992. In 1995, it moved to its current location.[7]

Visitors to the museum can view over 13,000 shoes spanning over 4,500 years of footwear history. From Chinese “foot bound” shoes to basic sandals and ludicrous fashion items, visitors can learn about the background of these items as well as the changes in shoemaking across the centuries. 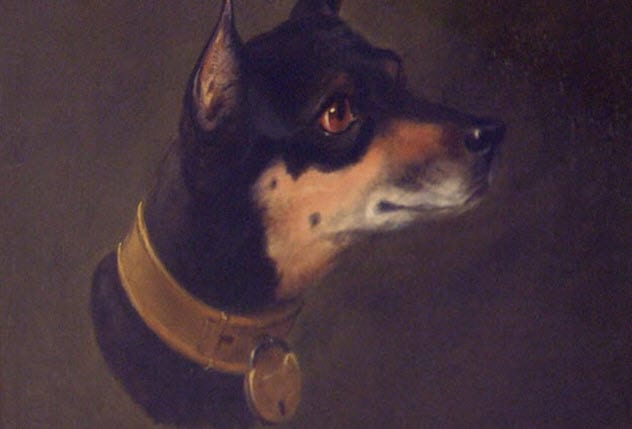 Even today, we clip on a nylon collar to attach a lead or identification tag. Any pet store has a range of doggie neckwear for your canine companion.

At Leeds Castle in Kent, you will find a museum dedicated to dog collars across the ages. Since 1976, the museum has displayed about 100 dog collars dating from medieval to Victorian times. The exhibit has collars that would seem barbaric by modern standards as well as elaborate royal collars decorated with each owner’s coat of arms.

An estimated 500,000 individuals visit the museum each year to browse through five centuries of doggie fashion.[8] 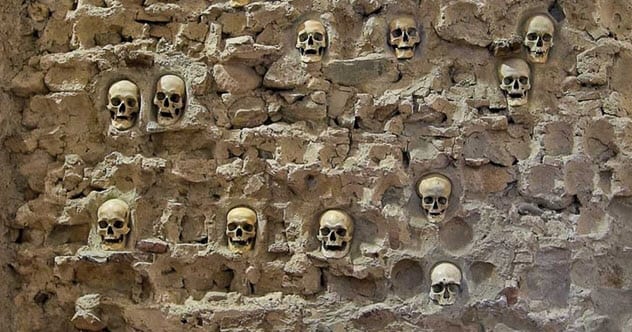 Serbia’s somewhat gruesome “Skull Tower of Nis” dates back to the Battle of Cegar in 1809. With Turkish forces fast closing in, Serbian commander Stevan Sindelic blew up a gunpowder store, killing himself and fellow soldiers to save them from torture by their captors.

Vizier Hurshid Pasha had the deceased rebels decapitated. Then the heads were skinned and stuffed. Finally, a 4.6-meter (15 ft) tower using the skulls of the 952 fallen Serbian soldiers was erected as a clear message to rebels.

Over time, some skulls fell from the wall while others were taken by relatives for burial. As of 2013, 58 skulls remained on display, including a glass-encased exhibit said to hold the skull of Sindelic.

A chapel was built around the tower in 1892 to preserve it as a monument to the fallen troops and a reminder of the barbarities of war.[9] 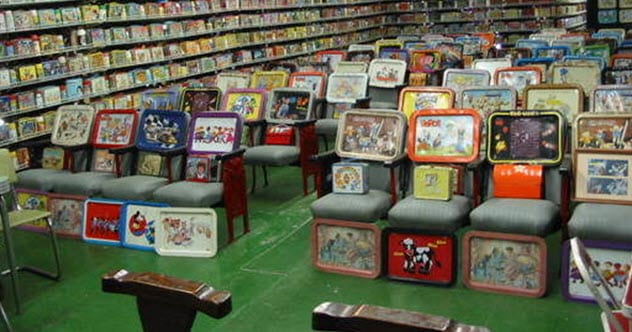 Over the years, we’ve all had our favorite lunchboxes—those utilitarian little objects that safely carried our sandwiches and fruit to school or work. Some of us will remember the metal boxes of the 1950s and 1960s—from the black-and-red plaid tins to those decorated with decals of our favorite folk heroes.

In more recent years, we shifted to plastic containers. These included the simple lidded plastic boxes and the trendy pop culture or Disney varieties that every school child “has to have.”

But did you know that there is actually a museum dedicated to lunchboxes? Above a country music station in Columbus, Georgia, you will find a museum displaying thousands of lunchboxes, thermoses, and coolers.

Owner Allen Woodall first began collecting lunchboxes in the 1990s. His museum collection is open to the public and displays the history of this humble container from the 1950s to the present.[10]

Read about more bizarre museums on 10 Peculiar Museums You Must See To Believe and 10 Extremely Strange And Unique Museums.