You would have to be living in a hermetically sealed sensory deprivation tank these days to not be aware of the extreme angst in society all around the world. That angst has been fomenting for more than a decade but we appear to be nearing the apex of its extremity at present. And if this isn’t the apex of social disquiet, I shudder to think where we will go from here!

Divisions of opinion over the election and governance of President Trump, climate change, globalization, and even the right to free speech is causing social anxiety to rise to levels bordering those of mass hysteria. And with those rising levels we see an escalation in both the number and extreme nature of public protest.

Note: the final image on this list may not be safe for work. 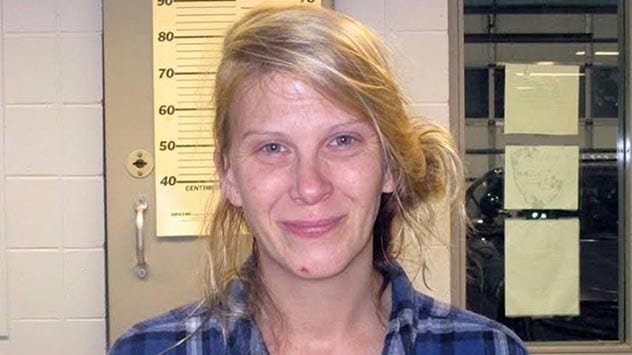 While passing what she thought was a pro-Trump meeting in Wisconsin, Christina Ferguson came up with a brilliant idea: smear peanut butter on the cars of the evil Trump fans. Most likely drunk, she initially entered the premises and yelled abuse at the meeting-goers before spreading low-salt smooth peanut butter on around 30 cars in the parking lot. But it turned out that the meeting was actually for a local environmental conservation club and they were none-too-pleased at the act of political vandalism even if it was intended for other people. Police caught up with Miss Ferguson who, whilst furiously licking her fingers, denied involvement. When it was pointed out that the group were not pro-Trump, she confessed and admitted she did it because of “how much she loved Hillary Clinton and hated Donald Trump”.[1] 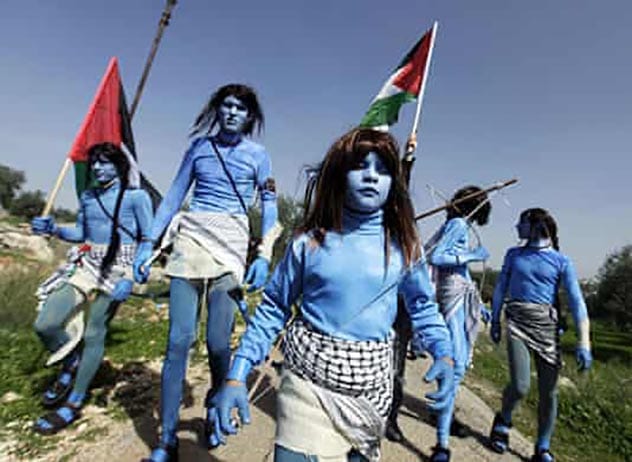 In an attempt to bring fresh attention to their disagreement over the Palestinian / Israeli border wall, Palestinians took to wearing blueface and donning the clothes of the Na’vi from the film Avatar. They believe that the barrier is a land-grab by Israel and that their own plight matches that of the fictional race. In response, the Israelis gassed the protesters with tear gas. Needless to say, there was no positive outcome for the men in blue. The film Avatar was released in 2009 and quickly surpassed even Titanic as the highest grossing film of all time.[2] 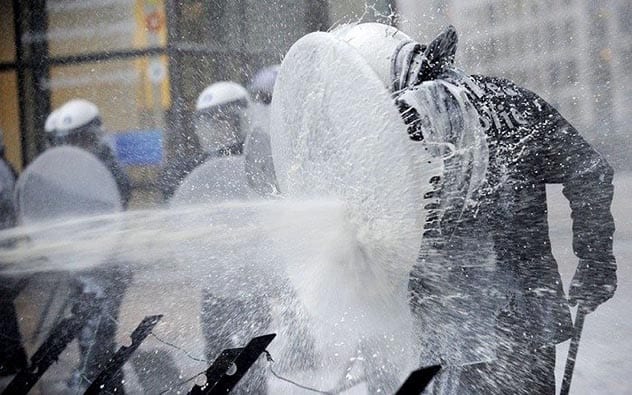 In 2009, to protest falling prices of dairy products and increases on quota limits by the European Union, farmers drove their farm equipment into Brussels and protested. In addition to bombarding the police with eggs and other farm products, the farmers burnt hay and tires. But perhaps the most bizarre element of all was milk cannons. Prior to arriving in the city, millions of liters of milk were also spilled into fields. It is not the first time that farmers have protested so violently in the city and is not likely to be the last, at least not until Brussels finally shuts its doors as the last member state departs from the union.[3] 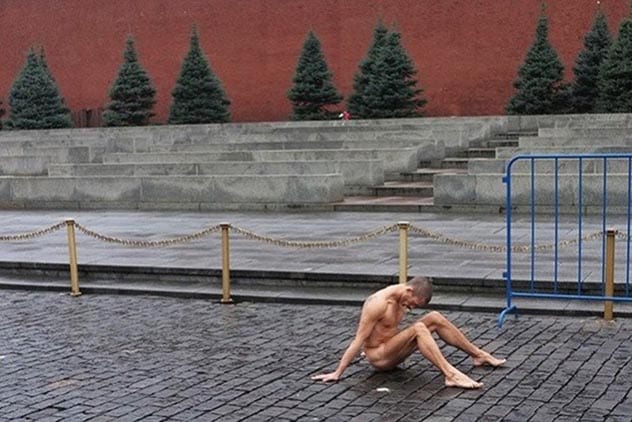 There is no good way to describe this so let’s just get it out: Pyotr Pavlensky, a Russian performance “artist” decided to nail his testicles to the cobblestones in Moscow’s Red Square to protest a government crackdown on political dissidents. Pavlensky has also sewn his lips shut and wrapped himself, naked, in a cocoon of barbed wire. His protestations have, not surprisingly, fallen on deaf ears. In a bizarre twist, fast food and political activist company Burger King decided to make two burgers in his honor: one which has a burnt bun (representing an arson attempt Pavlensky made) and one with an egg and spike through it.[4] 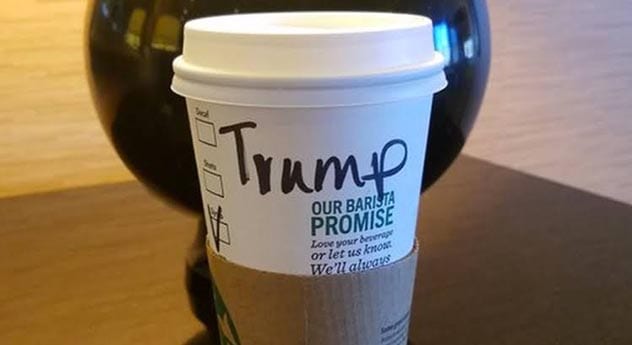 Where would we be without the intellectual giants of the twittersphere giving us their vital opinions every day? One group of supporters of president Trump decided to start a protest in his favor using two beloved pop culture icons: Twitter and Starbucks. The plan arose after a Starbucks staff member refused to serve a Trump supporter. To participate in the protest you simply had to go to Starbucks, say your name was “Trump” (forcing the staff to write the name on a cup) and wait. If you were refused, video it and tweet it with #TrumpCup. Ironically the protest did more for Starbucks as protesters obviously had to pay for their coffees. #Oops.[5] 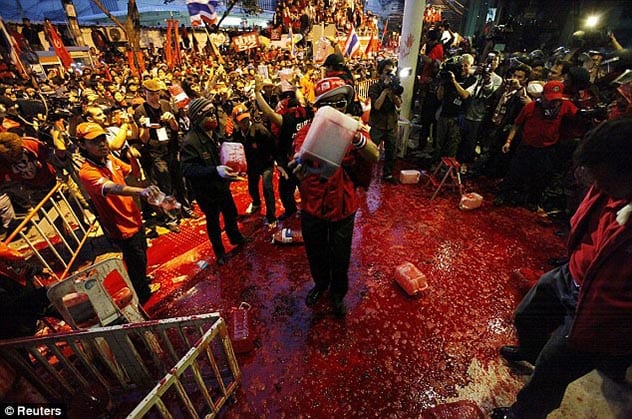 In Thailand, protestors in support of ousted Prime Minister Thaksin Shinawatra in 2010 decided upon a rather gruesome protest: they were going to dump 264 gallons (1,000 litres) of human blood outside government house. Lines of nurses drew a few teaspoons of blood each from the protestors and the extractions were combined in large bottles. These were then dumped onto the ground in what was not just horrific to look at but also incredibly risky from a health perspective. The protest ultimately garnered a protest of its own in the form of the Red Cross which said it was unhygienic and incredibly wasteful when the blood could have been put to good use. Specialist medical workers were needed to perform the cleanup operation and disinfecting of the area.[6] 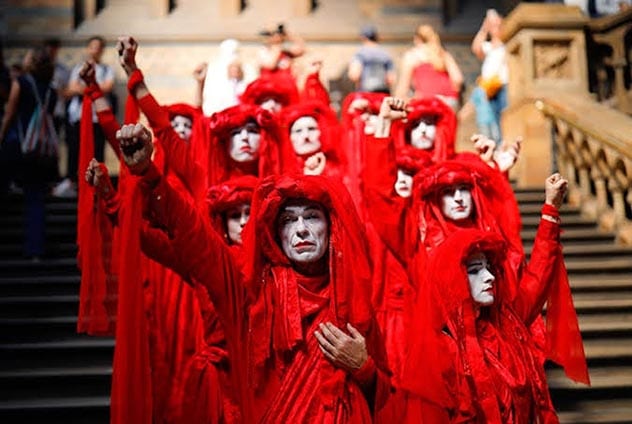 Looking like something straight from a scene in Stanley Kubrick’s Eyes Wide Shut crossed with The Handmaid’s Tale, Extinction rebellion is a protest group of mostly middle-aged people founded in 2018 by two British environmental and animal rights activists with the main purpose being civil disobedience to compel governments to implement their plans to halt changes to the Earth’s climate, to end consumerism and, perhaps ironically, to avoid the risk of social collapse. The group has a frighteningly fascist-like logo which is meant to symbolize a circled hourglass representing the fact that the end is nigh.

Their “Red” rebellion groups have partaken in a number of anti-capitalist or anti-consumerism protests, even as recently as this past Black Friday in which they carted a coffin through the streets of Vancouver, Canada to protest people buying things (other than red robes, black coffins, and the iPhones needed to tweet their protests, obviously). They also recently sprayed (from a firetruck) hundreds of gallons of fake blood at the UK treasury department in protest, presumably, of money.[7] 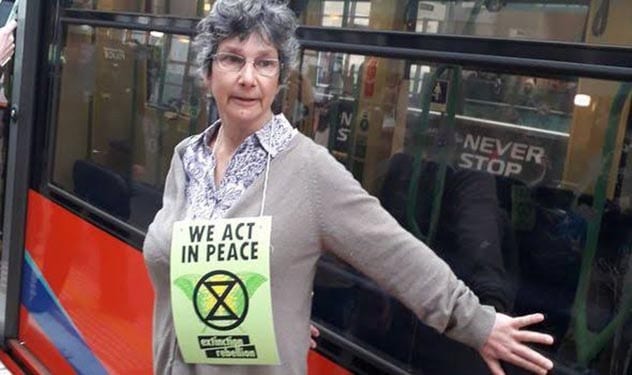 Here’s another from the Extinction Rebellion Group! Once again hoping to force politicians to implement policies created by the protest group to lower carbon emissions, members took to the streets of London and glued themselves to the roads and a variety of banks and trains. The purpose of the exercise is to block roads and bridges and cause as much disruption as possible. While it worked in the sense of causing trouble for the general populace, their protests were entirely ignored by those in power. One hundred and thirty five protesters were arrested in London for their trouble, and similar protests in New Zealand resulted in an additional thirty being arrested. None were charged so you can expect to see more of this behavior in the near future or until the protesters begin winning Darwin Awards, which has surprisingly not yet occurred.[8] 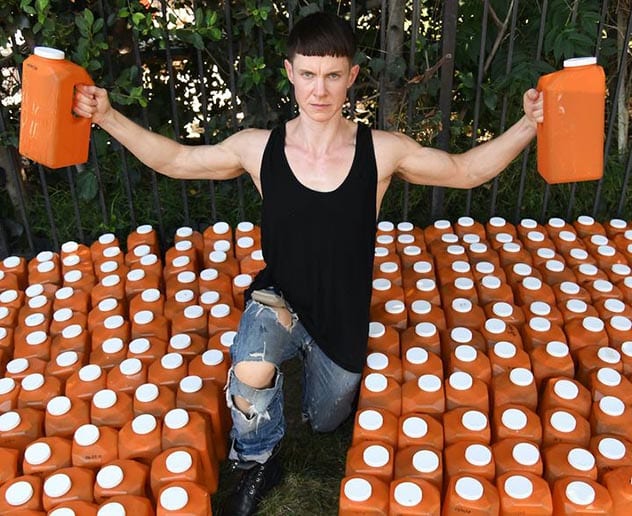 Heather Cassils is a female-to-male transgender performance artist and personal trainer from Canada who, upon hearing the news that President Trump was rescinding Obama’s trans-bathroom guidelines decided to start collecting all of the urine from his golden shower sexual activities in bottles to fill a 200 gallon tank at the Ronald Feldman Gallery. The act (as both art and protest) has received as many plaudits from the mainstream media as the artist has internationally recognized awards. It has been branded both “brave” and “powerful”. Heather sometimes collaborates with another group of artists called the Toxic Titties and also featured in Lady Gaga’s music video “Telephone”.[9] 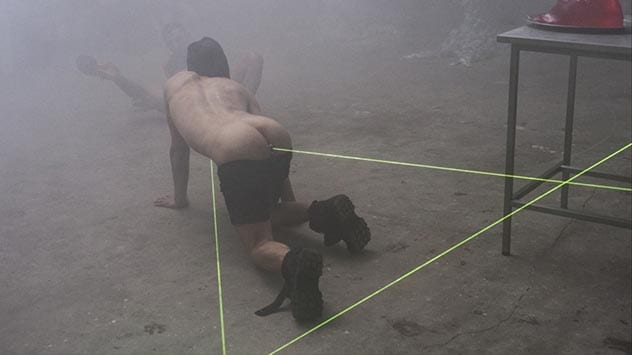 A dance troupe going by the name of the Young Boy Dancing Group is “challenging gender and sexuality” by writhing around on the floor with laser lights in their buttholes. Honestly, I can’t believe I am typing that, but here we are: it’s 2019 and this is the world we live in. What the group aims to achieve is not entirely clear, but they are certainly giving it their best shot.

A reporter present at a performance described it thus: “[The] performance quickly became total mayhem, with group members flailing wildly, creating a mosh pit, and running amok to a pitched-down, jittery dance remix of Enya’s “Only Time. [. . . Y]ou haven’t lived until you’ve seen fluorescent laser light refracted in a million different directions off of a disco ball, the source of which is some dude’s asshole.”[10]

For more lists like this, check out Top 10 Individual Protests, and 10 Disturbing Ways China Is Censoring The Protests In Hong Kong