It’s not all tea, crumpets, and royal weddings in the United Kingdom. In fact, Britain is home to some downright bizarre and truly weird and wonderful festivals.

To some outsiders, the Brits may seem prim, proper, and a bit too serious at times. But a closer look will dispel that notion. From ancient pagan rites to modern-day oddities, this small island has the power to charm, amaze, and occasionally disgust. But it’s always entertaining. 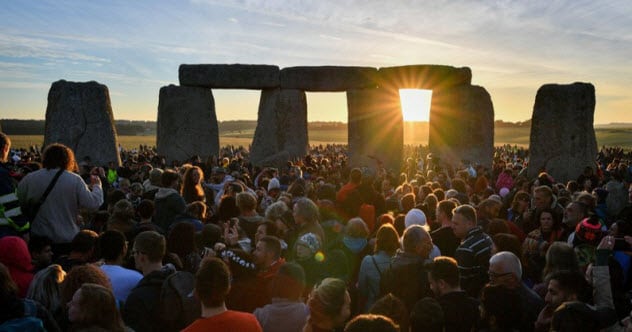 Each year, thousands gather at the ancient stone monument in Wiltshire to mark the summer solstice. As the Sun rises, it aligns perfectly with the Heel Stone, the ancient stone entrance to the monument, and casts rays of light across the revelers gathered there.[1]

Stonehenge is considered to be a sacred site by Britain’s pagan and druid communities. Visitors are not normally permitted to approach and touch the stones, but an exception is made for the solstice celebrations. It is unknown how, when, or why this ancient monument was constructed. However, there are many theories, each more fantastic then the last. 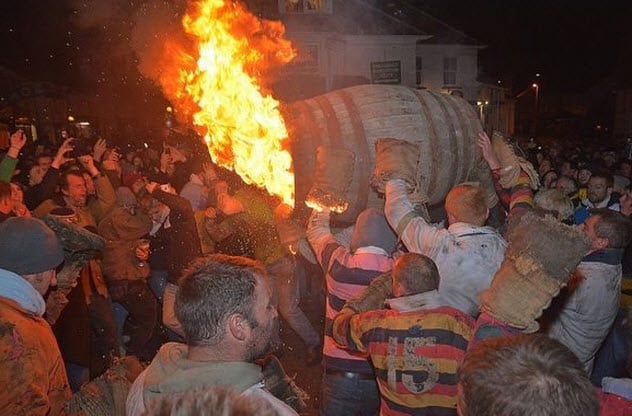 Each November 5, the usually quiet streets of Ottery St. Mary in Devon are lit up by the flickering light of flaming tar barrels. Men and women charge through the crowded streets while carrying these fiery barrels overhead. Each weighs as much as 30 kilograms (66 lb). Wearing thick gloves to protect their hands, the barrel carriers must have grit and courage to endure the heat.[2]

Many generations of the same families appear as proud barrel rollers. However, the origins of the festival are unclear. Some believe that it has links to the famous gunpowder plot, while others think it is a pre-Christian pagan ritual intended to drive out evil spirits. 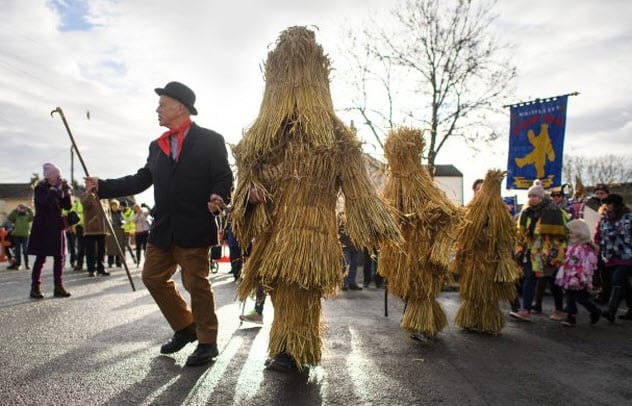 The small town of Whittlesea in the east of England celebrates the harvest in a particularly unusual way. Known as the “straw bear,” a man covered from head to toe in straw is paraded through the streets. Accompanied by musicians and led by a “keeper” or “driver,” the bear dances in front of houses and inns for gifts of food, money, or beer.

The event briefly died out in 1909 when a local police inspector banned it as a form of begging. However, the custom was revived in 1980 by the Whittlesea Society and now takes place during the second weekend of January.[3] 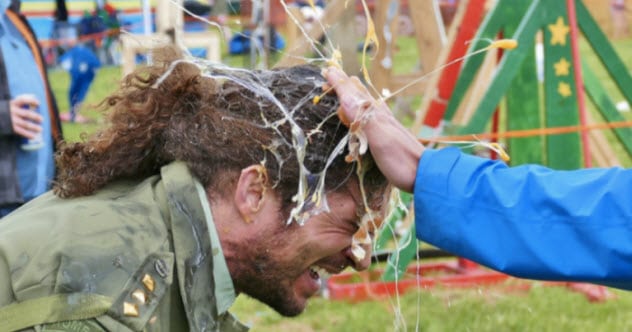 Legend has it that the tradition of egg throwing in the English village of Swaton dates back to the 14th century. In an attempt to boost numbers at church, the abbot gave out free eggs to all who attended. In 1322, the river flooded and prevented locals from attending church. So monks threw eggs across the river, and the tradition was born.

The first Egg Throwing World Championship took place as a feature of the 2005 Swaton Vintage Day where the grand prize was scooped up by an “eggstatic” team from New Zealand. Teams of two compete for the prize by seeing who can pass the egg farthest without breaking it.

Additional events include the “Russian egg roulette” in which competitors take turns smashing eggs against their own heads. Of the six eggs available, five are hard-boiled and one is raw. The competitor who picks the raw egg loses and ends up with actual egg on his face.[4] 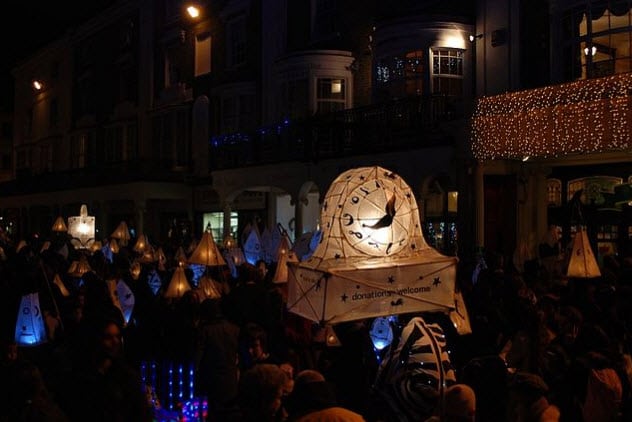 The seaside town of Brighton marks the shortest day of the year with the “Burning the Clocks” festival. Thousands of individuals line the streets to watch a procession of people with homemade fire lanterns. After parading through the town, the people ceremoniously burn the lanterns on the town’s beach.[5]

The event organizers explain, “Burning the clocks is an antidote to the excesses of the commercial Christmas. People gather together to make paper and willow lanterns to carry through their city and burn on the beach as a token of the end of the year.” 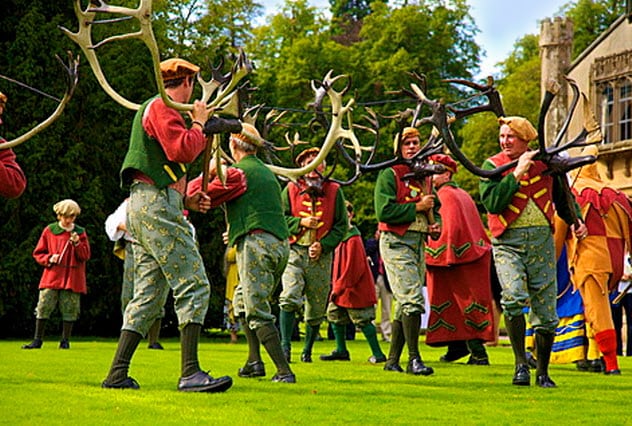 First performed in 1226, the Abbots Bromley Horn Dance is one of Britain’s oldest surviving traditions. Dancing through the town are six men dressed with reindeer antlers, two musicians, a man dressed as a woman, an archer, and a fool who hits anyone who comes too close with an inflated pig’s bladder.[6]

The reasons behind this strange event have been obscured by the mists of time. Some suggest that it was performed to mark the opening of the hunting season and to ensure a successful year. Others speculate that it is connected to ancient fertility rites. One thing is for sure: This ancient tradition is downright strange! 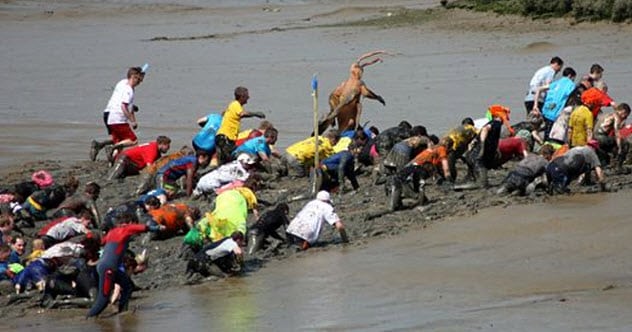 The Maldon Mud Race is held each year on the River Blackwater in Essex. At low tide, competitors race across the incredibly muddy riverbed and back with their footwear taped on firmly to prevent any lost shoes.

The event originated in 1973 when the landlord of the Queens Head pub was dared to serve a meal on the riverbank dressed in a tuxedo. The following year, a bar was opened on the riverbank for the day. About 20 people competed to dash across the river, drink a pint of beer, and return. The Maldon Mud Race was born.[7] 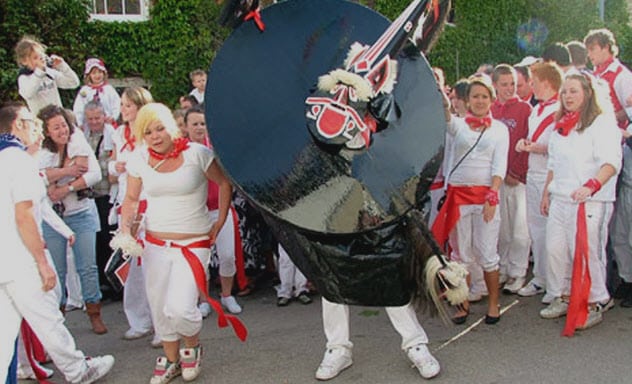 Perhaps the oldest dance festival in the UK, the ‘Obby ‘Oss is celebrated every May 1 in the Cornish fishing village of Padstow. Thought to be connected to the ancient Celtic festival of Beltane, the main event begins when two parades accompanying male dancers dressed as hobby horses (hence ‘obby ‘oss) swing through the town.

The ‘Obby ‘Oss consists of a large oval frame wrapped in a black oilskin with a strange horse’s mask and snapping jaw. The ‘Oss is accompanied by other dancers and musicians and led through the town by a teaser who prods the ‘Oss with a painted club.[8]

As he passes through the town, the ‘Oss will attempt to catch young maidens and drag them under his cloak. To be caught by the ‘Oss is considered good luck. 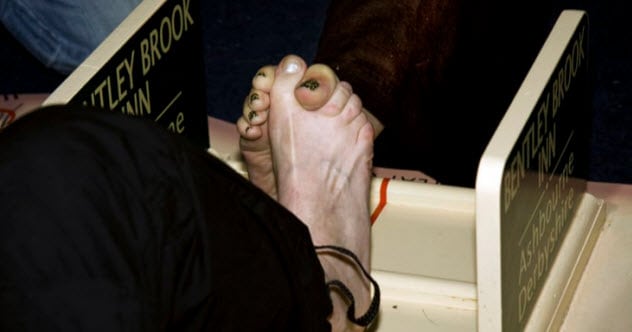 Established in Staffordshire in 1976, the World Toe Wrestling Championship is now held annually in the Bentley Brook Inn. Much like arm wrestling but with feet, contestants link toes and attempt to pin the other’s foot for three seconds. You’ll be pleased to know that the feet of all competitors are thoroughly checked by a podiatrist before they can compete.[9] 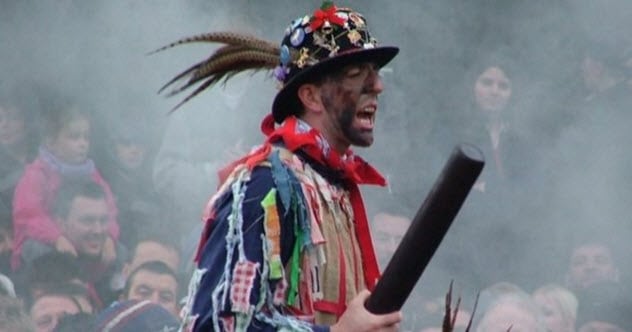 First played in the 14th century, the Haxey Hood takes place on the 12th day of Christmas each year. Regulars from the town’s four pubs attempt to push the “hood” (a leather tube) to their pub, where it will remain until the following year.

Legend has it that in the 14th century, the wife of local landowner John de Mowbray was out riding when her hood was blown from her head. She was so amused by the efforts of the 13 farmhands who chased the hood across fields that she gifted the parish 13 acres of land on the condition that the chase be reenacted every year.

Said to be more about drinking than anything else, the game begins when the hood is thrown into the air and a large rugby-style scrum (known as the “sway”) converges on it.

There are no organized teams, and the only rules are that the hood cannot be thrown or run with. As many as 200 people can be playing at any point. The objective of the game is to move the hood to one of the local pubs. The game ends when the hood is touched by the pub’s landlord standing on his front step.[10]

Will is an entrepreneur, yogi, and travel lover. He can be found at www.veganchocolateshop.co.uk.