Iron swirls at the center of the Earth and even in our blood. The metal also resides within mysteries like Earth’s disappearing iron and the ancient Chinese potters who created a rare variant that no modern laboratory can.

Iron’s reputation might be dull, but it turns up in strange places in ways that are spectacular—from tiny balls inside birds’ heads to rivers of molten metal deep underground. Iron can also behave strangely, turning fruit purple and even pretending to be the precious metal platinum. 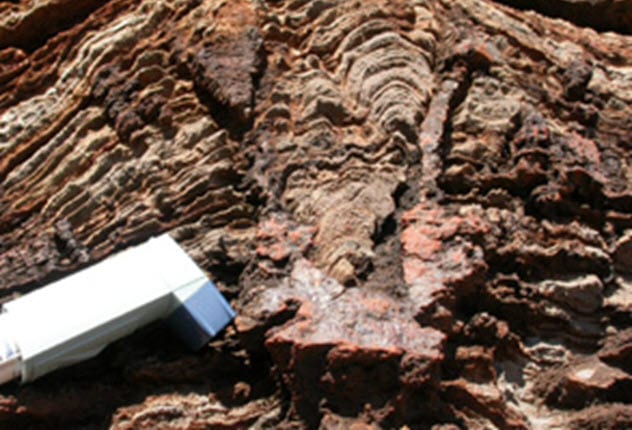 Oxygen is the key to life on Earth, and understanding its origins could reveal how life began. One of the biggest mysteries in the field happened 2.5–2.4 billion years ago.

Without explanation, oxygen levels began to rise. The best hope for clues came from Western Australia. The region holds the Banded Iron Formations, which date back to the time when the atmosphere became oxygen rich.

The iron ore might contain sulfur isotopes. The chemistry of the particles can act as a progress report. In this case, they could provide a clear snapshot of oxygen’s earliest evolution. Previous research also showed that the East Pilbara had an older history of volcanism and that the growth of volcanoes might have contributed to the formation of an oxygen-rich atmosphere.[1]

Unfortunately, the isotopes are deep underground and out of reach for the average scientist. If a mining company could drill for samples, the cores might reveal the complete story of how a world with no oxygen became increasingly ready for life. 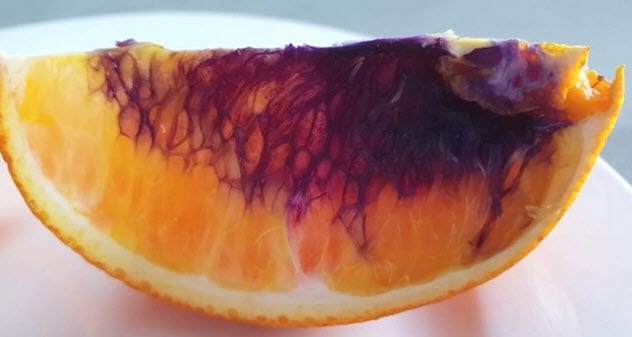 In 2018, an Australian woman sliced an orange. Within a few hours, the fruit mysteriously developed purple stains. The bizarre wedges were whisked off to a laboratory along with the knife she had used. When the researchers heard that the woman’s husband had sharpened the blade a day or two earlier, they took the steel sharpener as well.

As it turned out, the pair of tools was key. Tests on the funky fruit showed that the smudges were the result of a reaction between a pigment called anthocyanin and iron.

The pigment occurs naturally in oranges, and the iron came from the newly honed blade. Even though the owner rinsed the knife, an excess of microscopic metal bits stayed behind. They transferred to the orange during cutting. The chemical reaction was likely amplified by the effects of cold temperatures after the family placed the wedges in the fridge.[2] 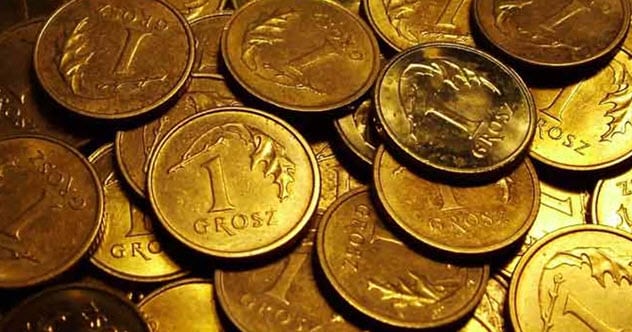 Coins tend to leave a cloying smell on one’s fingers. In 2006, German researchers found that the metallic odor did not come from small change. Instead, it was produced by human skin.

The study allowed seven volunteers to handle iron-containing objects. The group reported that their hands reeked of metal, and subsequent gas samples from their skin isolated the root of the odor. It was a molecule called 1-octen-2-one. This organic compound forms when skin oils decompose.

Apparently, after an object with iron is touched, perspiration adds two electrons to each iron atom. This makes iron atoms doubly negative, and their reaction with skin oils causes the latter to decompose. The result is 1-octen-2-one molecules. What we smell is not iron from a coin but a kind of body odor.[3] 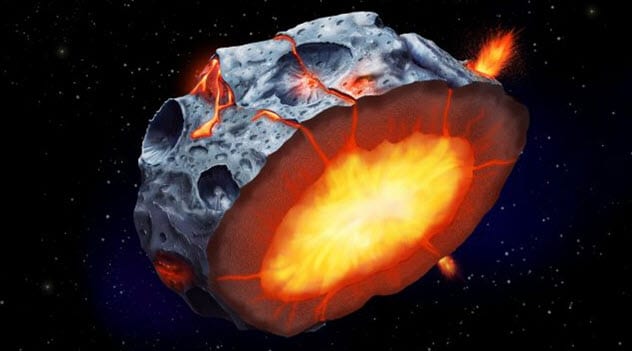 Space volcanoes behave strangely. For example, there are planets with cryovolcanoes that erupt with water instead of lava. In 2019, a scientific paper suggested an unknown brand of volcanism. Although iron volcanoes do not exist on Earth, there is a chance that metallic asteroids in our solar system once had them.

The solar system is too frigid these days for asteroids to contain molten metal, but billions of years ago, things were different. Some asteroids started out as small planets. Collisions peeled the planetesimals to their liquid metal cores. As the latter solidified, the process included temporary volcanism at the surface.

Interestingly, if the eruptions spewed pure iron, it would have looked different from what Earthlings are used to. Instead of viscous lava flowing in thick formations, iron more likely spread as thin sheets with low viscosity.

To confirm the possibility of such volcanoes, scientists need to look at a metallic asteroid. NASA plans to launch a spacecraft in 2022 to investigate Psyche, the biggest of the bunch. Since the craft will only arrive in 2026, evidence of iron volcanoes must wait a few years.[4] 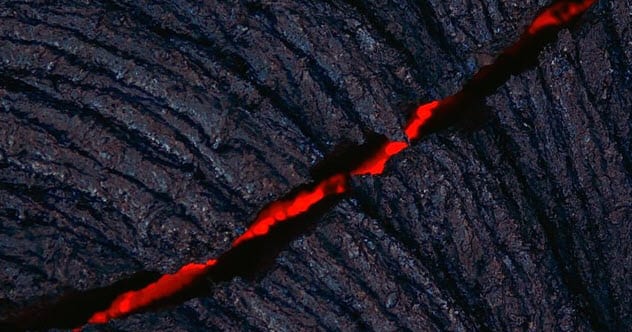 In recent years, three satellites found a strange feature. Designed to study the planet’s magnetic field, the trio tracked unusual lobes of magnetic flux under Siberia and Alaska. Soon, it became clear that the lobes were on the move. The reason was remarkable.

The magnetic lobes were being pushed toward Europe by a massive river of iron. The molten metal flowed 3,000 kilometers (1,864 mi) under the surface and measured 420 kilometers (260 mi) wide. It was nearly as hot as the Sun’s surface and was curiously accelerating.

In the last 20 years, the deadly river’s speed has almost tripled. While the cause of the acceleration remains unknown, it could be a natural process seen for the first time.

Changes in the magnetic field allow researchers to track the stream’s progress, which currently slews forth at 50 kilometers (31 mi) a year. If this is indeed an unknown cycle, then understanding its full mechanism could help predict future changes in Earth’s magnetic field.[5] 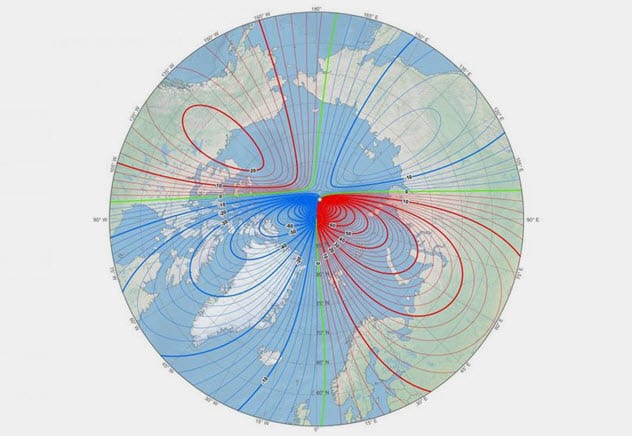 Every five years, the World Magnetic Model (WMM) is updated by the British Geological Survey and NOAA. Since magnetic north is on the move, the calibration of complex navigational systems to simple compasses relies on WMM.

The pole is driven by unpredictable magnetic forces originating within the Earth’s iron core. For centuries, the Canadians had the pole, but since 1860, it has glided toward Siberia.[6]

However, months before the deadline, scientists noticed that the deceleration did not continue as predicted. Having sped up again, the pole’s position had moved so dramatically that NOAA and the British Geological Survey issued the first emergency updated WMM.

Although the reason behind the acceleration is unclear, possible influences include the iron river in Canada and a strong magnetic patch in Siberia pulling the pole eastward. 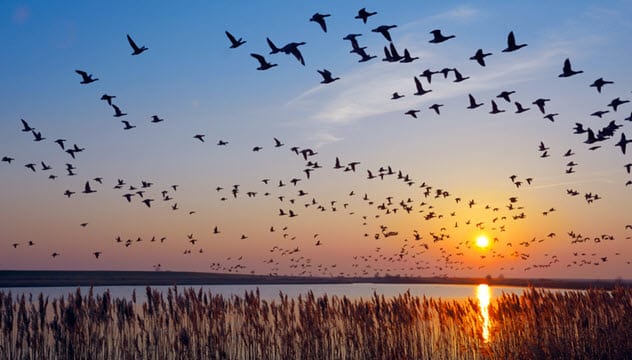 When the scope of bird migration became clear, a mystery ensued. How do flocks travel between oceans and continents to reach their destinations? At one point, scientists realized that birds used the Earth’s magnetic field. However, that was puzzling, too. For them to use it, the creatures had to detect the field somehow.

In 2013, an odd feature was discovered in birds that might explain their awareness of magnetism. The study looked at something called hair cells. Located within the ear, they pick up on noise and gravity. Incredibly, when researchers zoomed in, they found that each cell had an iron ball.

The species did not matter. Every bird they examined carried the metal orbs. The discovery was astonishing—not only for its abundance but also because the iron balls had managed to elude science for so long. Nothing is certain yet, but the balls could be a part of the mysterious magnetoreceptors that birds need to follow the planet’s magnetic road map.[7] 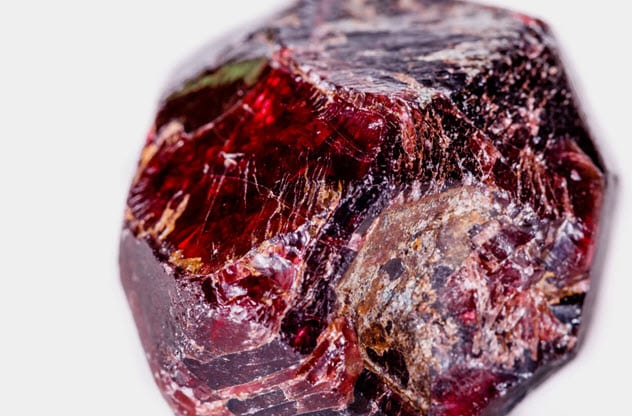 Earth’s iron is vanishing, and nobody knows why. In the past, volcanic conditions were blamed. The theory suggested that a mineral called magnetite absorbed iron as it became available when rock melted deep underground.

This did not hold up to scrutiny. Iron depletion occurs at greater rates where the Earth’s crust is thick. Had magnetite been the thief, the mineral would have been more plentiful in the depletion zones.

In 2018, researchers found a new candidate in the zones, one that was abundant and filled with iron. It was another mineral—the ruby-like garnet. Certain things about the mystery did not change. Scientists still believed that the culprit sucked iron from lava. To confirm that garnet was responsible, they investigated deep-crust rocks that had been thrown from volcanoes millions of years ago.

True enough, they were packed with the glittering mineral. The study then examined a global database of volcanic rock collected from all over the globe. The analysis revealed that magma with more garnet pieces also had less iron. Although more studies are needed to confirm this, garnet looks very guilty of the crime.[8] 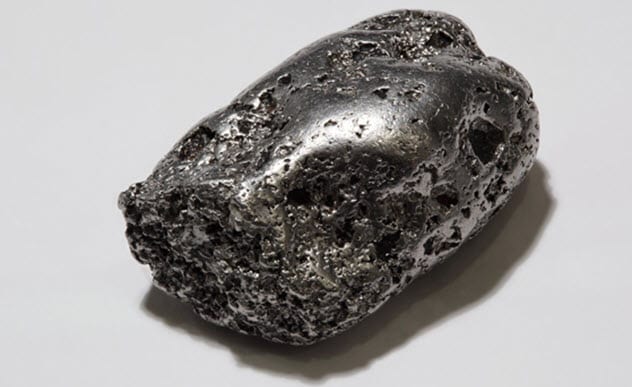 Alchemists have tried for centuries to turn lead into gold. None of them ever succeeded, but the closest thing to transmutation happened in 2012. At Princeton University, chemist Paul Chirik tricked other molecules into thinking that iron was platinum. The consequences could be far-reaching.

Iron is much cheaper than platinum, a precious metal that cost about $22,000 a pound in 2012. In comparison, a pound of iron was $0.50 back then. If a cheap pseudo-platinum could replace the real thing, then the costs of technology involving the precious metal might also drop. Platinum is used as a catalyst to produce things like high-octane fuel and pharmaceuticals.[9]

How did Chirik achieve this feat?

His solution was simple. He wrapped an iron molecule in a ligand, which is another molecule but organic. The ligand changed the number of electrons that bonded with other chemicals, making the latter react to the iron as if it were platinum. 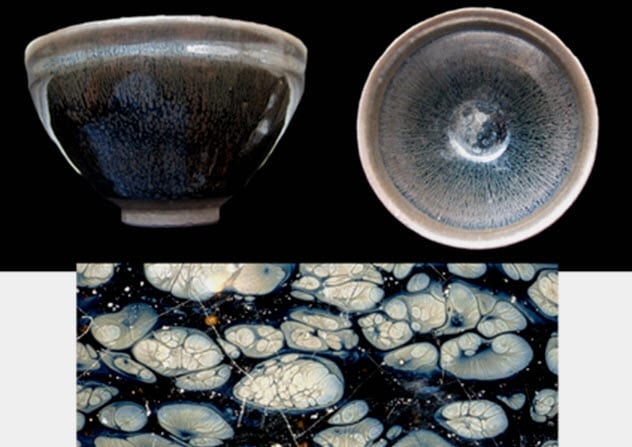 Jian ceramics were produced in China during the Song dynasty. Between AD 960 and 1279, the tea bowls became highly prized. Tea lovers, especially from Japan, appreciated the fact that they retained heat. The vessels were also beautiful. Covered with a dark glaze, the surface showed patterns called “hare’s fur,” “partridge spots,” or “oil spots.” The designs were caused by molten iron in the glaze.

Scientists hunt this compound like there is no tomorrow. It promises magnets that are stronger, nontoxic, and corrosion resistant for better electronics. This iron oxide would also make the manufacturing of such magnets cheaper.[10]

However, all attempts to create pure epsilon-phase iron oxide have failed. The Jian glaze might reveal the recipe for the rare compound, which researchers hope to replicate successfully one day.

For more fascinating discoveries about metals, check out 10 Metal Detector Discoveries That Will Truly Amaze You and Top 10 Secrets Discovered In Silver.