Derived from the Latin word “reliquus,” meaning “left behind,” relics have always played an important part in religion. More than a decaying body part or a stained rag of cloth, the items became the physical embodiment of God’s work on Earth. Many Churches during the Middle Ages cashed in on the hype and created their own religious relics; more than seven heads of John the Baptist existed. While I have tried to vary the relics as much as possible you will undoubtedly notice the overwhelming amount of Christian relics. 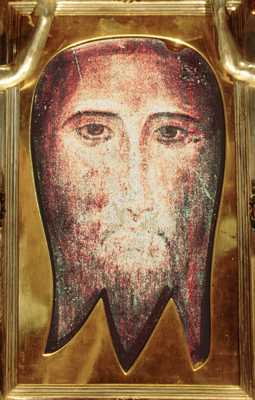 The poor man’s Shroud of Turin, the Mandylion of Edessa is a towel on which Jesus had dried his face. The legend behind the relic is that the towel was created after the Turkish King Agbar of Edessa commissioned an artist to produce a portrait of Christ. After failing to capture Christ’s brilliance, the artist was given the towel by Christ himself. When the artist returned with the Mandylion, the king was cured of his leprosy. The Mandylion of Edessa remains one of the most important relics in the Vatican’s collection and currently resides in the Pope’s private chapel. 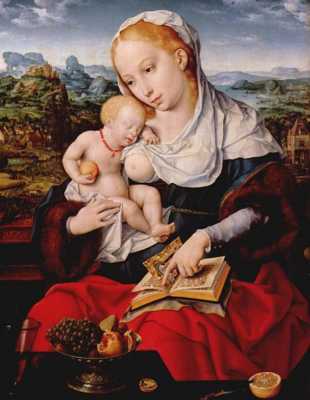 The holy breast milk was an extremely popular relic in the middle ages. An entire church was built outside Bethlehem on a rock which had miraculously turned white after coming into contact with the Virgin’s milk as she breastfed Christ. Another legend says that St Bernard was praying before a statue of the Madonna when milk sprayed from its breast into his mouth. Many vials of the milk were taken and transported all over Europe. The French theologian John Calvin said, “Had the virgin been a cow her whole life she could never have produced such a quantity.” 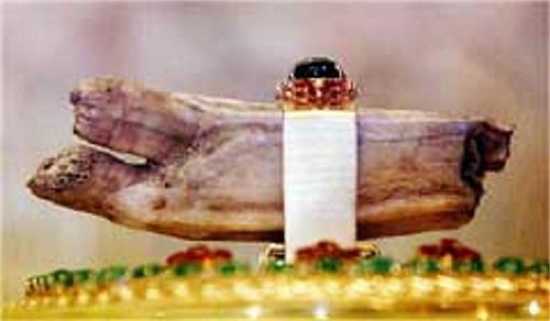 After Buddha was cremated, his left canine tooth was found in the ashes by his disciple Khema, who gave it to King Brahmadatte so that it may be venerated. Legends began to circulate, the most prominent of which was that whoever possessed it had the divine right to rule Brahmadatte’s kingdom. Many wars were fought for no other reason than to own it. The tooth was said to be responsible for converting many Indian Kings to Buddhism, performing miracles each time it was threatened with destruction. It is now placed within several golden caskets and displayed only for special ceremonies. 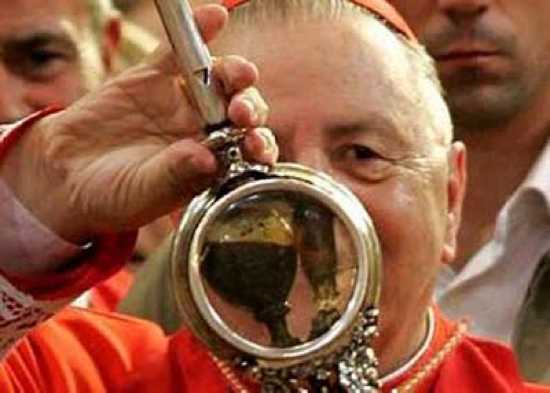 Fittingly the patron saint of blood banks, St Januarius was beheaded at the volcanic crater Solfatara in 305. His blood was saved by a woman called Eusebia and taken to Naples. Allegedly, the coagulated blood liquefies like clockwork. Preserved in two vials, the blood is removed from its shrine three times a year (one of which is 19th September, the Saint’s feast day) when thousands gather to watch the blood turn to liquid and pray for the safety of the city. The blood failed to liquefy in 1527 and 1980, the years of a plague and an earthquake respectively. 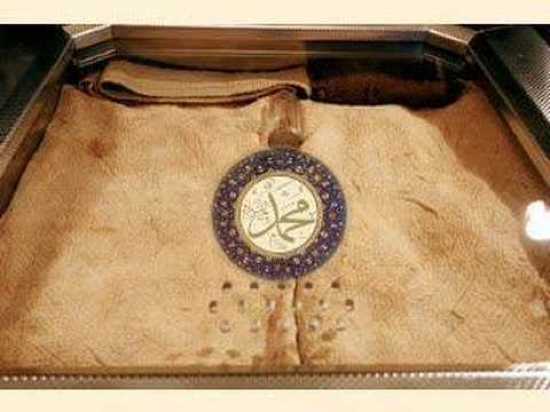 The founder of modern Afghanistan, Ahmad Shah, once found the cloak of Muhammad in Bokhara. Wanting the relic for himself, he asked the keepers to lend it to him. Averse to lending such a precious item, Ahmad Shah vowed never to take the cloak away from a very large boulder. Their trust proved their undoing for as soon as the cloak came into the king’s hands he immediately ordered the removal of the rock and transported both back to Kandahar. The cloak is now kept in a shrine near Ahmad Shah’s tomb, where the boulder also resides.

5
Shrine of the Magi 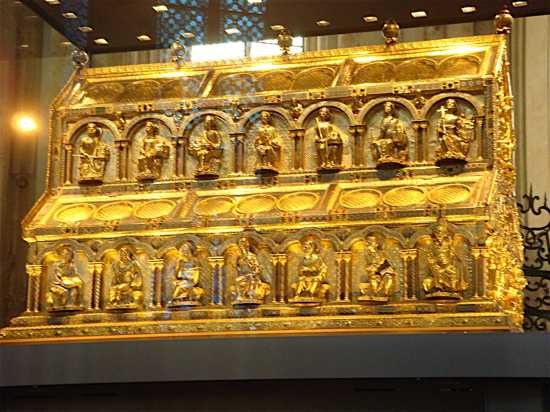 The remains of the three wise men arrived in Cologne in 1164 after being gathered in Jerusalem by Saint Helena and after being held for a number of years in Constantinople and Milan. The shrine itself is an elaborately decorated gold-plated triple sarcophagus held inside the Cologne Cathedral. It is the largest reliquary in the western world. The relics have become such an important aspect of Cologne’s sense of identity that there are three crowns on the city’s coat of arms. 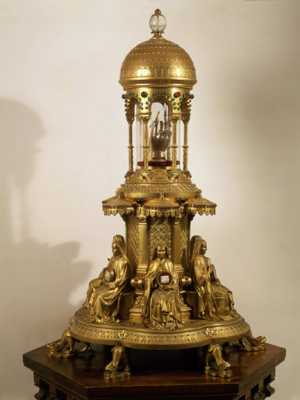 Saint Teresa had a surprising role in both the Spanish Civil war and the ensuing Francoist dictatorship. Catholicism was a major aspect of Franco’s regime and Saint Teresa was used as a propaganda tool in endorsing his oppressive ideology; a warped representation of traditional Spain. In February 1937, the future tyrant Francisco Franco acquired the hand of Saint Teresa after it had been stolen from a convent in Ronda. He took the mummified hand wherever he went and even slept with it underneath his pillow. He saw his obsession through to the end as he died clutching it in 1975. 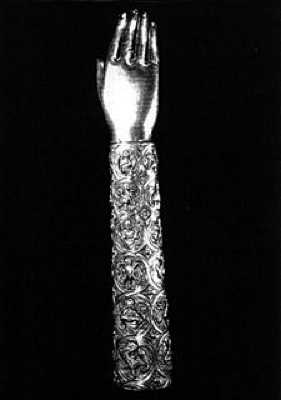 In 1191, Saint Hugh visited the abbey of Fécamp. Shown the abbey’s relic of Mary Magdalene’s arm, he tried to take a piece. Finding it difficult to remove a chunk manually and to the horror of the monks, he bit off two fingers. He justified his actions thus, “If a little while ago I handled the sacred body of the Lord with my fingers in spite of my unworthiness, and partook of it with my lips and my teeth, why should I not treat the bones of the saints in the same way – and without profanity acquire them whenever I can.” 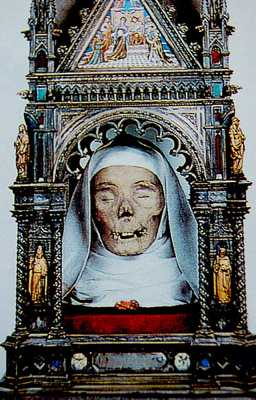 Saint Catherine of Siena once received a vision that Jesus gave her a wedding finger made of his own holy foreskin. She died from a stroke aged 33 in Rome. However, the people of Siena wanted her body back for veneration. Realizing that they couldn’t take the entire body back, they cut off her head and placed it inside a sack. When the guards stopped the thieves they only found hundreds of rose petals within the bag and had no choice but to let the thieves go. The head is still on display in Siena, along with Saint Catherine’s dismembered thumb. 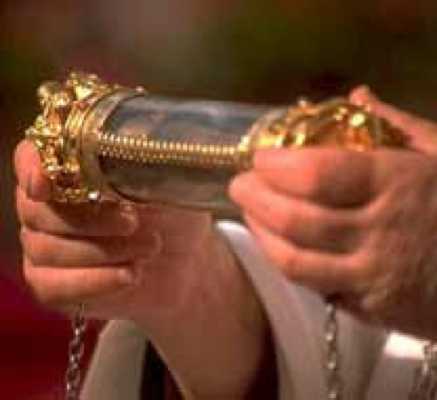 Also known as the Holy Prepuce, the earliest historical appearance of Jesus’ foreskin came when Charlemagne presented it to Pope Leo II in 800. Interestingly, most of the visions that relate to the Holy Prepuce were from female Saints; St Bridget claimed that she had orgasms when bits of foreskin were dropped on her tongue by an angel. By the 20th century the Holy Prepuce became little more than an embarrassment to the Church and the last known claimant was stolen in 1983 in Calcutta.