The airplane is a feat of modern engineering, a symbol of humanity’s ongoing innovation, a gateway to anywhere in the world… And a condemnation to screaming babies, a constant whirring drone and a megalopolis of bacteria. Whichever you choose to believe more in, these top 10 terrifying facts show just how skin-crawling the fruit of our modernization can be.

10 There is no safest seat 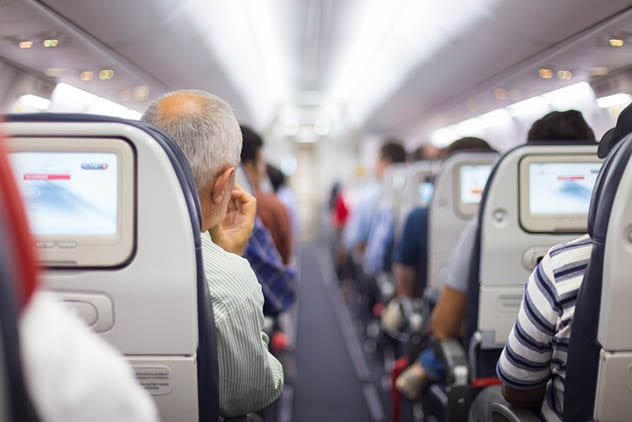 Every plane crash is unique, and the safest seat is impossible to calculate until the wreck actually occurs. The most advantageous position will be dependent on the type of accident; it varies if the jet succumbs to a nose dive, rolls or land on water. However, estimations have been made on the most secure place to be. In 2012, a group of researchers used an uncrewed Boeing 747 replete with crash dummies and crashed it in an attempted emergency landing into the Mexican Desert. The front of the plane was found to fare the most poorly. The cockpit was mangled, some seats were flung hundreds of feet, and because of the sheer destruction, live passengers would have likely been seriously injured or killed. These findings are supported by a 2015 analysis by Times magazine of the Federal Aviation Administration’s CSRTG Aircraft Accident Database. They found that the middle seats near the rear of the plane had the lowest fatality rates, at 28%. This is in comparison to a rate of 44% in aisle seats in the middle of the plane. Ultimately, one’s lifetime chance of being in a plane crash is 1 in 1,800, in comparison to 1 in 112 in a car, so these statistics may just be clutching at straws.

9 The Toilet is not the dirtiest place 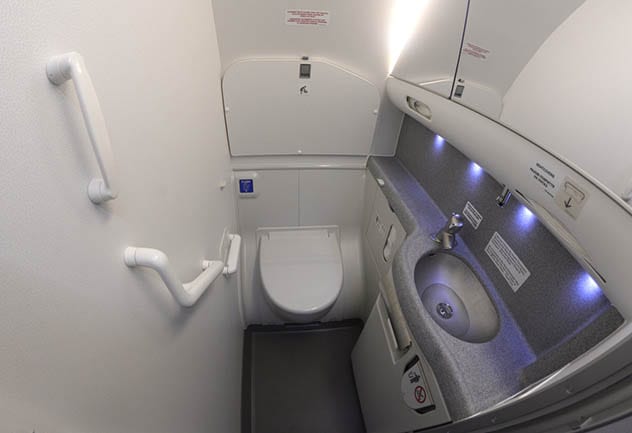 That the location people go to relieve themselves is not the dirtiest place on a plane is surely an alarming statistic. A 2015 study by TravelMath found that although flush handles had 265 bacteria colony forming units (CFU) per square inch, there were two other gut wrenching locations with even more pathogens. Seat back trays were the most happily bacteria colonized places on the aircrafts, with 2,155 CFU per square inch. That’s an eye-opening 8 times higher than flush handles. This is likely because of cleaning limitations; between flights staff have the opportunity to remove rubbish, but not to perform a more thorough sterilization. Disgustingly, an Auburn University study found that bacteria in this location lasted for longer than any other—At seven days. Overhead vents were also less than hygienic, at 285 CFU, while seat belt buckles and headrests (Found with E. Coli present) also raised red flags. With between 150 and 350 people onboard each flight, the potential for germ spreading is almost infinite—And horrid. 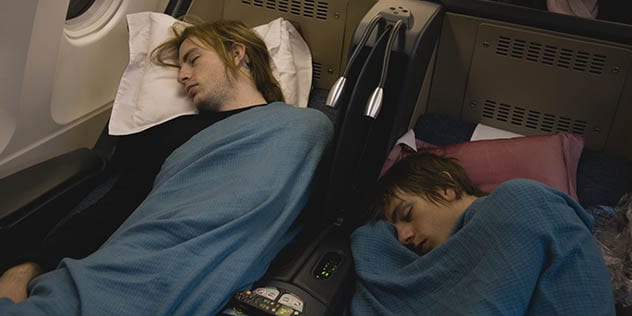 Airplane blankets have a notoriety that rivals that of Al Capone. An enquiry by the Wall Street Journal’s unit of investigative journalists found that the majority of these polyester fleeces are washed merely once each 5 to 30 days; on top of this, they are reused between washes for a slew of individual passengers. One lucky passenger will be fortunate enough to receive the blanket on the magical day that it is cleansed, but each thereafter will be subjected to increasing bouts of nastiness. Federal Law requires that these measly quilts are treated with a chemical flame retardant, but this is the single requirement for the industry. Most people regard cellophane-wrapped blankets as being clean, but lab testing of sealed blankets has shown yeast, mold and other bacteria. Laundry employees for one airline have also stated that only 20% of blankets (Ones with distinct stains) are washed. What’s worse, some airlines are charging their passengers for blankets. Take this advice, and BYOB—Bring Your Own Blanket. 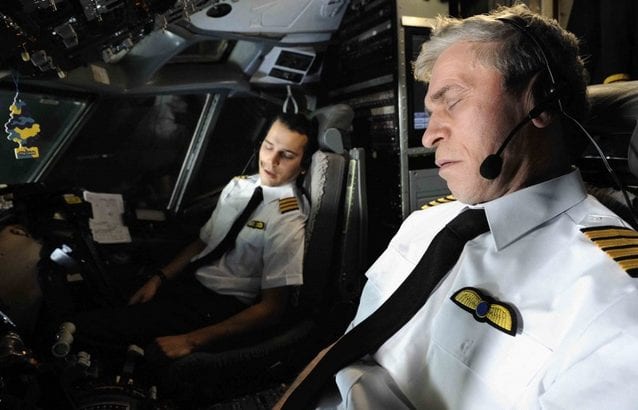 Boredom at work is one of the most prolific issues that can plagues some employees, but a plane cockpit isn’t exactly the ideal place to catch some shuteye. A survey was conducted by the European Cockpit Association in 2012; it involved 6,000 pilots being assessed for a ‘Fatigue barometer’. 3 out of five pilots in Sweden and Norway admitted to making mistakes in their line of work due to fatigue, and in Germany this statistic was 4/5. But there were more alarming figures involved—More than 40% of British pilots confessed to visiting slumberland at the controls of a passenger jet. Even more drastically, 1/3 of these admitted to waking up and finding their co-pilot also comatose. Although pilots are permitted to ‘Catch some zzz’s’ while flying, at least one pilot must be awake at all times. The results were so extensive that the ECA described it as the most, ‘Common, dangerous and under-reported phenomenon in Europe’. Until COVID-19 arrived, that is, although the ‘Under-reported’ aspect doesn’t exactly transfer.

6 You may be flying with only one engine 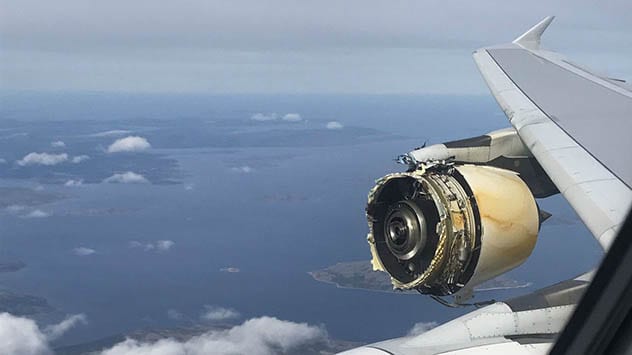 Transoceanic flights have typically been flown by three- or four-engine wide-body airliners. Aviation reasoning dictates that there is strength in numbers, but these multi-engine jets are becoming extinct and are replaced by more fuel-efficient two-engine aircraft. Modern engineering prevents engine failure from being a regular occurrence, but even if one were to fail, today’s jets can take-off fly and land with just one engine. Even if dual-failure occurred, a plane can glide perfectly without. As long as air is passing over its wings, the bird will remain in flight, and so a plane with no propulsion will change its altitude for this to continue. It can even remain in the air for between 20 and 30 minutes before reaching the ground. Many are aware of the controversial and arguably infamous Hudson River landing in New York in 2009, but although the prospect of flying with a single turbine or less is daunting, the fuzzy little microorganisms residing elsewhere in the plane are likely to be far more deadly.

5 Turbulence is getting worse 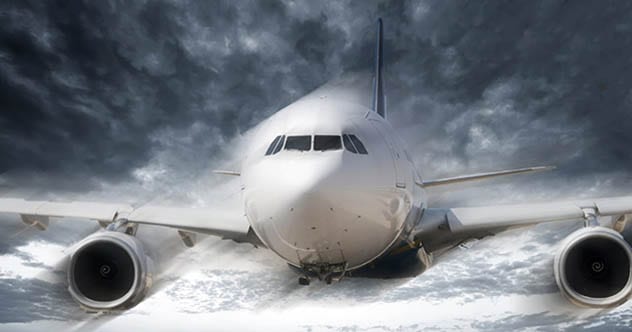 Umpteen air-bound travelers are aware of the unfortunate scenario—A sudden public announcement, a maddening dash to fasten seatbelts and the topple of drinks to the floor. Air turbulence is already a nuisance, and it won’t be succumbing any time soon. Scientists now believe that extreme turbulence is due to increase by several hundred percent in the crowded airspace over North America, Europe and the North Pacific by the mid-century, when the amount of carbon dioxide in the atmosphere is predicted to be double its pre-industrial concentration. The current estimated economic cost of turbulence is $200 million each 365 days for United States airlines alone, and this is expected to skyrocket alongside the growing extent of mid-air turmoil. The irony of the predicament is difficult to ignore—According to a paper published in the Environmental Science and Technology journal, planes are 50 times worse than cars per passenger mile in terms of a five-year warming impact—And so planes are creating their own problem just by their very existence.

4 The water is not so crystal clean 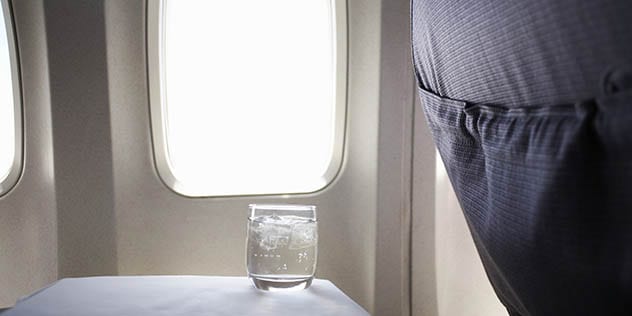 If the afore mentioned exposé on aircraft bacteria was not vehement enough, consider this—The substances that you ingest on a plane, namely water, may not be taintless. A 2019 Airline Water Study investigated the quality of tap water in both major and regional US Carriers, and the researchers were in for a startling conclusion. They found varying levels of E.coli and coliform, both of which are present in feces, in the aircraft’s Adam’s ale. This water is supplied through faucets in the galley and lavatories—The water used to wash one’s hands and make hot beverages, including coffee and tea. Suddenly it’s easy to understand why many flight attendants intentionally don’t share in the joy of consuming these delightful refreshments. 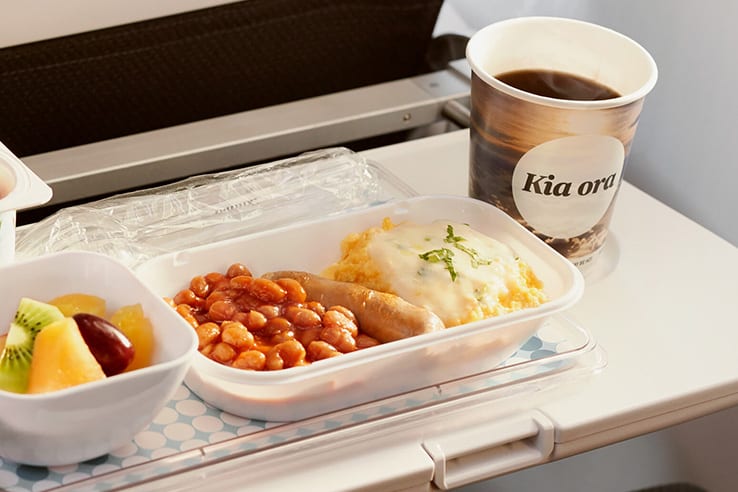 It’s not exactly cloak-and-dagger that dishes served on aircraft are bland, unappetizing and generally the yuckiest thing known to man. What is not customary is finding 1500 food violations over a period of four years, as was experienced by the FDA between 2008 to 2012. The organization investigated a number of separate food preparation facilities, all of which supply airlines, finding the following on numerous occasions; dirty utensils, mice, roaches, ants, feces, moldy products and unrefrigerated food. Food is being assaulted on more than one front however; scientists have now shown that due to, ‘Sensation transference’, plastic cutlery causes food to taste worse. Another attack on food in the sky takes place in the form of moisture. French chef Raymond Oliver is credited with inventing, ‘Wetter is better’, in relation to airplane food, because saucy meals inevitably dry out to a lesser extent—And taste better. Finally, supposed, ‘Freshly-prepared food’, may have been cooked between 12 and 72 hours before you consume it. Yummy. 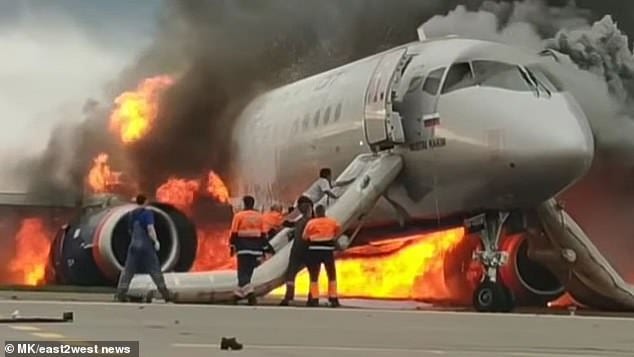 Although pathogens are indeed disgusting, they are incomparably less likely to kill you than an aflame plane. Not to spread utter panic, but the Federal Aviation Administration obligates that a plane can be evacuated in one minute and thirty seconds. The reason—This is the time it takes for fire to engulf and spread through an aircraft cabin. To maximize your chances, sitting within five rows of an exit is the most strategical option. Otherwise… That can be left to your imagination. 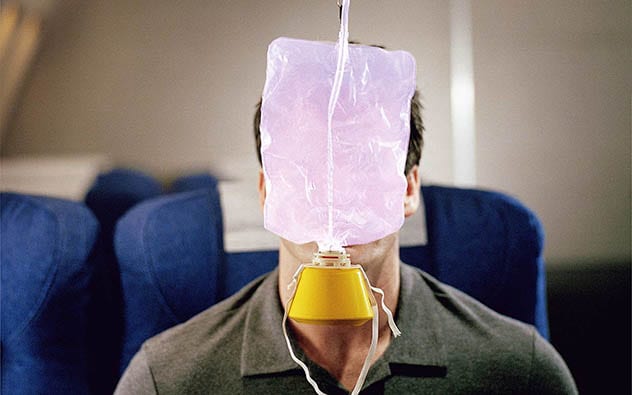 That’s right—Those precious oxygen masks (Although not as cherished as COVID-19 face masks), only buy you between 12 and 20 minutes of breathing. Fortunately, this is usually a significant enough duration for your pilot to guide the plane to an altitude at which the supplementary oxygen isn’t necessary. The alleged ‘Oxygen’, does not actually start out as this, but is instead stored as a cocktail of chemicals and converted to breathable gas.

If you dare to step onto a plane without wearing a hazmat suit ever again—Good luck, you brave soul.