As of this writing, over one-third of the world’s population is currently in quarantine or facing some type of lockdown or restriction. So it wouldn’t be surprising to see some lasting impacts from this COVID-19 pandemic.

You can expect new houses to contain quarantine amenities (just like the Cold War inspired bomb shelters), TV shows to add coronavirus episodes, and more people to ditch underwear after having discovered during their time working from home that fewer layers are more comfortable.

In the past, there have been at least 10 such cultural, scientific, and politically defining moments.

10 The Origin Of The Word ‘Quarantine’ 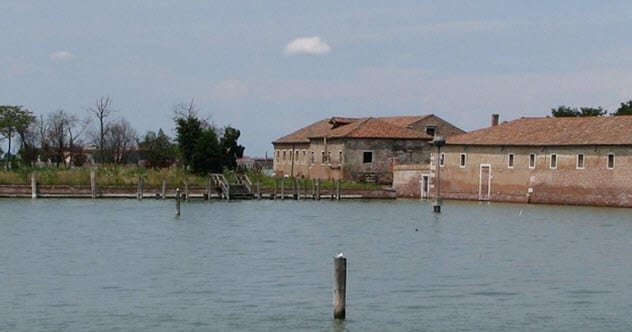 The English word “quarantine” was initially used to describe a period in which a potential disease-carrying ship was kept in isolation. The word was first used in the 17th century, and it is derived from the Italian expression quaranta giorni, which means “40 days.”[1]

The bubonic plague outbreak that ripped through the European continent resulted in one of the most significant die-offs in human history. In the mid-1300s, the plague spread through iconic European cities, including Venice.

In 1377, authorities in the Republic of Ragusa (now Dubrovnik, Croatia) legislated trentino, which required incoming ships from plague-affected regions to stay isolated for 30 days before anyone could debark. Eventually, neighboring cities adopted the law. Over several decades, cities increased the isolation period to 40 days, and trentino was changed to quarantena. No one knows exactly why.

The word “quarantine” has since taken on a broader meaning. It now refers to various measures—from the isolation of groups of people who are considered infectious to bills of health issued to ships as well as sanitary cordons and disinfection. 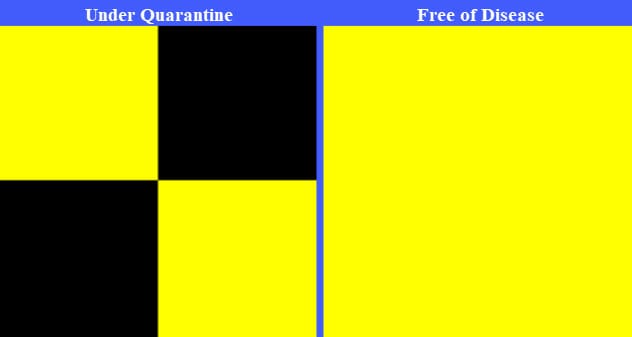 Any two-cent government worth its salt knows that epidemics affect its economy across numerous fronts, including the agricultural, health, transportation, and foreign trade sectors. As a result, humans have responded for centuries to the threat of morbidity and mortality from epidemics through coordinated disease-control strategies. The quarantine flag is one such method.

The first recorded use of the quarantine flag is in the 18th century. During that period, signals were used to show that no infectious diseases were on incoming sea vessels.[2]

The present quarantine flag is the black-yellow international signal flag, LIMA (also called Yellow Jack). Any docking vessel under enforced quarantine is expected to fly this flag. However, if the vessel is free of any known quarantinable disease, they should indicate a request for “free pratique”—the license given to enter a port—by hoisting a plain yellow flag.

8 The Bible Enumerates Guidelines For Quarantine 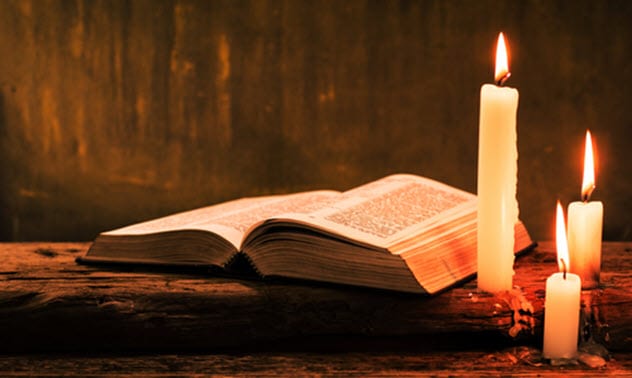 An early reference is made to quarantine in the Bible. The Book of Leviticus, which was probably written in the sixth century BC, described a procedure for preventing an epidemic under the Mosaic dispensation. It commanded that infectious people be quarantined for a while until the priests declared them healthy.

Laws like these are usually referred to as “case laws.” They are representative of the various types of real-life cases that people might have encountered back then. They expressly address issues regarding the handling of infected bodily secretions, contaminated clothing, sick houses, and epidemics.[3] 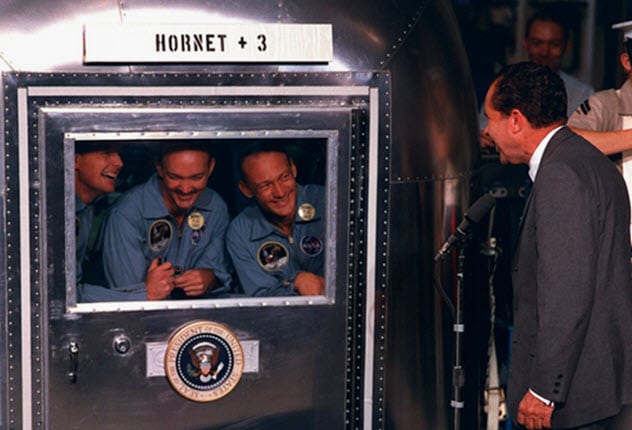 NASA went to extraordinary lengths to isolate the three astronauts who returned from the unforgettable one-small-step-for-man-one-giant-leap-for-mankind Apollo 11 mission. Before this mission, expeditions involving close-orbit lunar navigation had determined that the Moon was not made of cheese or any such nonsense.

Even so, no one at the time was sure whether the Moon was sterile. So, there was a need to prevent potential Moon germs from ravaging the Earth’s populace.

After the Apollo 11 capsule splashed down in the Pacific Ocean on July 24, 1969, the astronauts were met by the naval crew on the aircraft carrier USS Hornet. The naval crew gave biological isolation garments to the astronauts and moved them to a Lunar Receiving Laboratory where they were isolated for three weeks.[4]

You might think that was overkill until you remember the 1979 sci-fi movie Alien. In the film, a crab-like “facehugger” attacked Gilbert Kane and impregnated him with an alien embryo. Seemingly okay, he went about his normal activities until the infant alien burst forth from his chest at dinner and fatally wounded him.

Admittedly, the chances of these men bringing back a pathogen of some kind were remote. But if they did, it was unlikely that humans would be immune to it. The risk was just too high. After the Apollo 14 mission, this procedure was scrapped as there was still no evidence of life on the Moon.

6 Quarantine Of People With Strange Variations Of A Disease 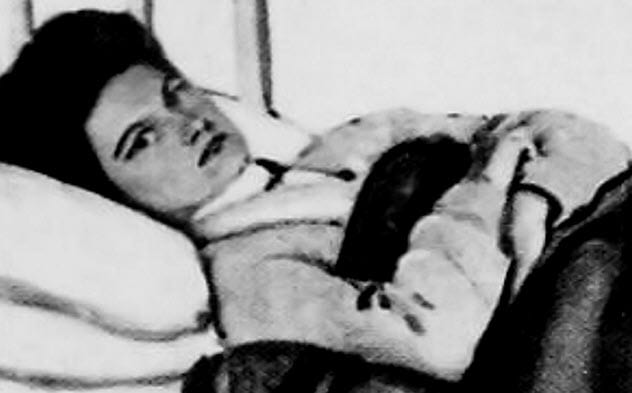 In the past, people with irregular variations of a disease have been asked to isolate themselves when there was no outbreak.

In 2007, for example, Andrew Speaker, a lawyer from Atlanta, was diagnosed with a drug-resistant strain of tuberculosis. Subsequently, he was instructed by the CDC to isolate himself. At first, he fled. However, he was later apprehended and quarantined at the National Jewish Medical and Research Center in Denver. There, he was cured.

Irish-born cook Mary Mallon (aka “Typhoid Mary”) infected over 50 people with typhoid fever, which caused at least three deaths. Deemed highly infectious, she was forced to spend the rest of her life in isolation. After a total of over 25 years in quarantine, she died alone. Today, the term “Typhoid Mary” is an idiom for a transmitter of anything harmful or undesirable.[5]

5 The Genius That Emerged Thanks To Social Distancing 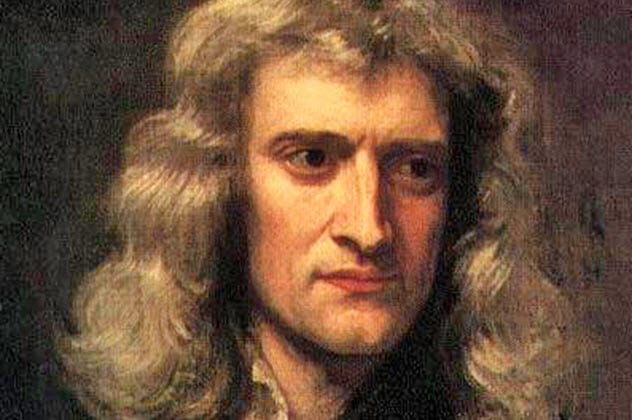 With the bubonic plague ravaging London in 1665, “social distancing” instructions caused campuses all around England to become empty. It seemed unfair at that time for most people but not for a certain student at Trinity College, Cambridge, named Isaac Newton. Free of the university curriculum and his professors, Newton dove into discovery.

In the 18 months he spent in isolation, Newton laid the foundations for calculus, investigated optics, and determined that white light consisted of all components of the visible spectrum. The revolutionary law of universal gravity was also born at his home in Woolsthorpe Manor.

According to William Stukeley, Newton began to contemplate gravity when he took note of apples always falling straight to the ground. Newton eventually returned to the university after the Great Plague, and he went on to become a professor. His discoveries during the quarantine, though, served as the foundation for some of the greatest scientific innovations.[6] 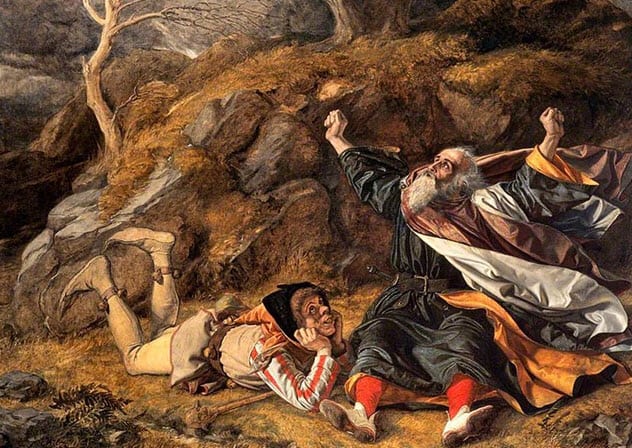 Sir Isaac Newton was just one of the many geniuses of antiquity who achieved incredible things while confined to his house. In addition to scientific breakthroughs during quarantines, there have been artistic ones in the form of literature. The popular King Lear was written by William Shakespeare, the “Bard of Avon,” during the 1606 quarantine. He also wrote Macbeth during this period.

In 1816, during a cholera epidemic that affected most of Europe, 19-year-old Mary Shelley came up with the genius idea to write the first science fiction novel, Frankenstein, while in confinement. In the process, she helped to launch the horror fiction concept. Frankenstein was published two years later.[7]

3 Governments Have Fled Previous Outbreaks And Isolated Together 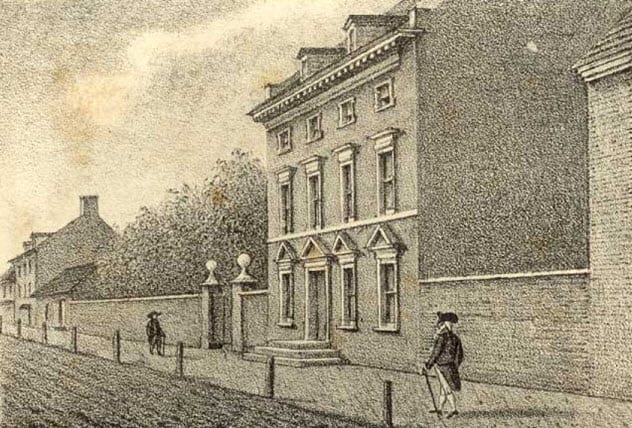 1793 was perhaps the most awful year in the history of Philadelphia, Pennsylvania. The summer was scorching hot and humid, and the streets were littered with the bodies of those who had succumbed to the American plague (yellow fever). It struck Philadelphia hard. Doctors didn’t know the origin of the disease or understand that it was transmitted by mosquitoes.

Just as the illness began to spread, President Washington and the entire federal government made the decision to leave the city, which was the temporary capital of the US back then.

In much the same way, King Charles II of England decided to leave London to escape The Great Plague in 1665. Along with his family and his entire court, the king left the city for Salisbury in July of that year. They relocated to Oxford in September 1665 when some cases of plague were discovered in Salisbury.[8]

2 The Effectiveness Of Quarantines Has Been Debated 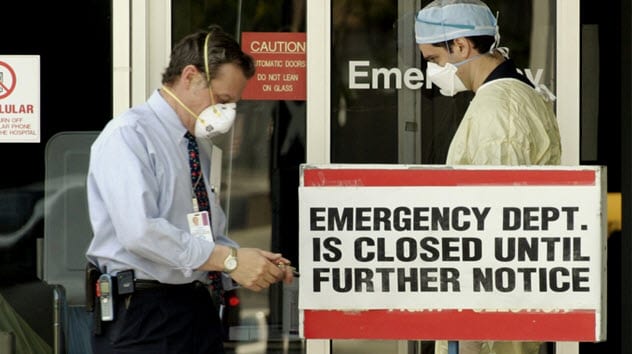 While quarantines have proven effective in stopping the spread of diseases in populated areas, not everyone is on board with it. The ethics and the effectiveness of this response remain debated subjects.[9]

When the SARS coronavirus broke out in Canada in 2003, the whole of Toronto was placed under quasi-quarantine. The following year, one study suggested that public health officials should have focused solely on contact tracing instead of enforced quarantine.

During the Ebola outbreak in West Africa in 2014, health workers returning to America were quarantined in some US states. Dr. Thomas Frieden, the CDC director at the time, criticized the states for their response to these health workers who were going all-out to tackle Ebola in West Africa.

Sometimes, civil rights activists have protested about people being rounded up, disrobed, and showered against their will even if it is for decontamination to prevent the spread of a disease. But others have responded by saying that local health authorities have the right to enforce this practice.

1 The Island Of Death 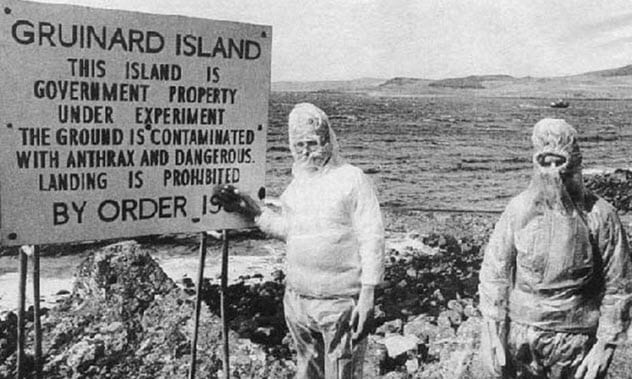 There are countless uninhabited islands on our beautiful blue planet. Some of them are unexplored, some are cordoned off to function as wildlife sanctuaries, and some have a much grimmer reason for keeping people out. Enter the spooky Gruinard Island.

After requisitioning this little island from its residents during World War II, British forces began testing the feasibility of using a deadly biological weapon called anthrax on Gruinard. As they were scared of the threat of an imminent Nazi chemical attack, the Allied Forces considered deploying first.[10]

They tested a strain of anthrax called Vollum 14578, which was very severe. All 80 sheep placed in the detonation zone for the experiment died within days of exposure.

The war ended in 1945, and the weapon was never used. The initial owner then requested the return of his island. However, it had become uninhabitable, and mass decontamination would have been very costly.

The Scottish island was quarantined for 48 years. In 1990, four years after a decontamination procedure, the safety of Gruinard Island was eventually announced by the removal of its warning signs.

About The Author: Akin is a fresh engineering graduate who loves to write and has a bizarre fascination with airplanes and history. He also loves to sing, even though his voice is not all that enviable.