Legend has it that a young girl once tried to save a panda from being attacked by a leopard. Giant pandas were all-white at that time and the girl saw the leopard stalking a snow-white panda cub. She jumped in front of the leopard to distract it and give the panda time to escape. The leopard in turn attacked the girl and killed her.

Many pandas came to the girl’s funeral to honor her memory and commemorate her brave act. The pandas had black ashes smeared around their paws and as they hugged one another in grief and wiped their eyes the ashes smeared, creating the iconic white and black pandas we know and love today.

As demonstrated by the above tale and the fact that there are actual panda-hugging job opportunities out there, it is clear giant pandas are beloved animals, but sadly they are also a vulnerable species. It is believed that there are just fewer than 1,900 wild pandas left in the world and an estimated 600 in breeding centres and zoos worldwide.

On this list are just a few awesome reasons the world needs to do everything it its power to save the panda from extinction. 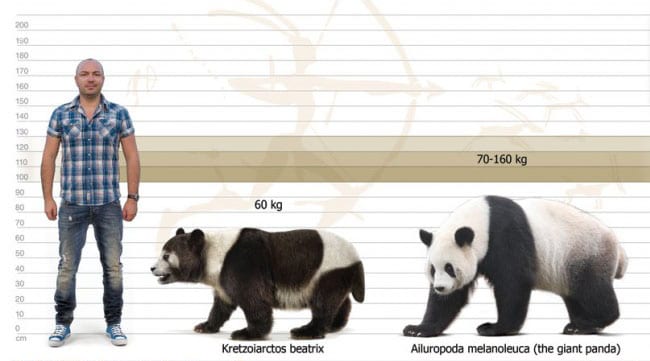 A study published in 2012 reported that a prehistoric relative of the giant panda had been discovered in Spain after fossil teeth were found near the city of Zaragoza. It is believed that the species, named Agriarctos beatrix, is the oldest known panda relative and palaeontologists have stated that it is over 11 million years old. They also speculated that the prehistoric bears may have had similar black-and-white patterns but was a lot smaller than the pandas we know today. They likely weighed around 60 kilograms and also would have climbed trees to escape predators.[1]

Experts also suggested that the panda may have originated in Europe and not Asia as previously accepted. However, not everyone was on board with this claim and palaeontologist, Blaine Schubert, said a lot more evidence was needed to support such claims.

Then, in 2017, it was reported that the fossilized teeth of a ‘bear similar to a panda’ was found in Hungary. It was found that this species lived on a diet similar to that of modern pandas and added to the evidence that pandas originated in Europe. 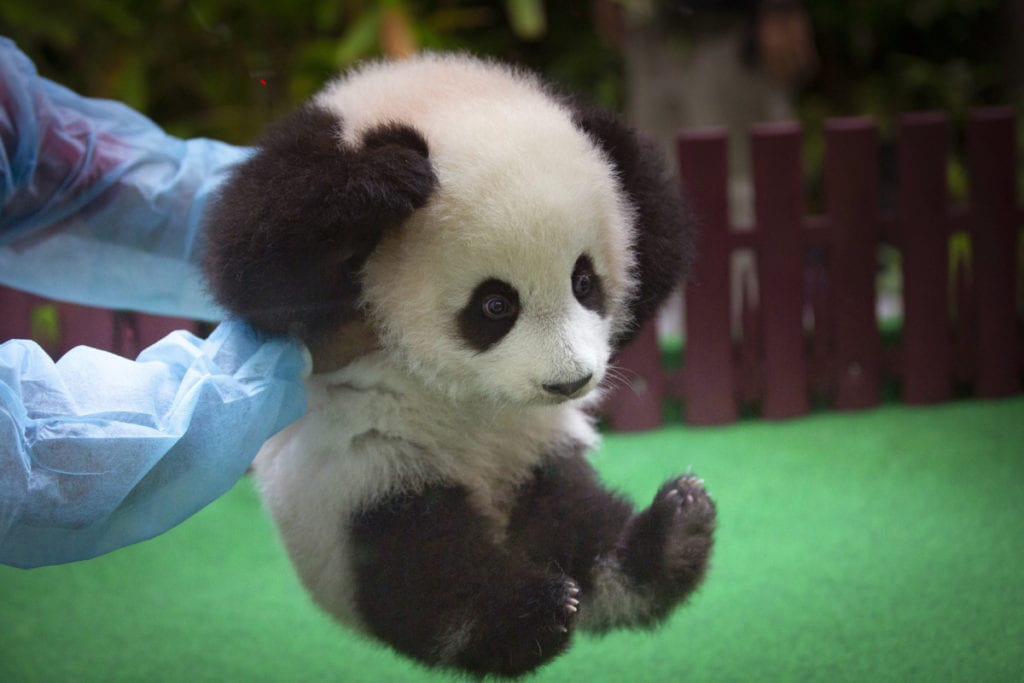 When a baby panda is born, it is completely fur-less, pink, and blind. It starts growing black hair after one week and after about a month, white hair also begins to grow, giving the little panda its distinctive look. While a panda baby starts walking a lot earlier than a human baby (around 3 months after birth), they start eating solid food at around the same time (around 6 months after birth). At this point they can eat bamboo and start growing faster.[2]

Panda cubs can also be fed with dog milk as it is similar to panda milk. A panda who lived in a Beijing zoo in 2000, had twin cubs and was unable to produce enough milk for both her babies. This led to her nursing one and abandoning the other. The zoo then ran an advert in a local newspaper for a nursing dog and they soon found a surrogate doggy mom for the abandoned panda cub. Even red pandas can survive on dog’s milk as is evidenced by two red panda cubs that were nursed by a dog in 2009 after their mother rejected them.

8 Digestive system of a carnivore 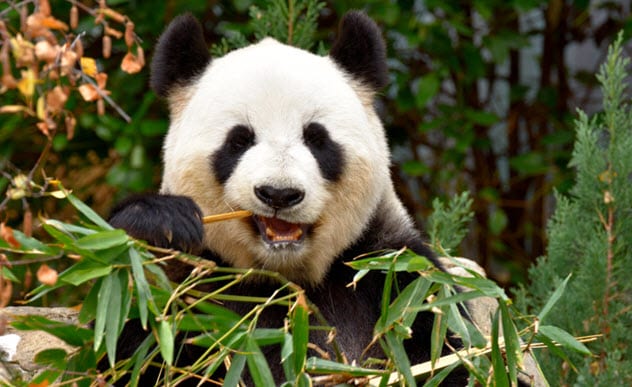 Pandas mainly eat bamboo, but it contains very little nutritional value, they must eat up to 38kg every day to sustain their energy requirements. Sometimes wild pandas look for other options, such as small rodents and other plants, which then make up around 1% of their diet.

Although giant pandas are herbivores, they are a member of the bear family and therefore possess the digestive system of a carnivore. They have however evolved to depend almost solely on bamboo which leaves them vulnerable to any form of loss of their habitat. Pandas favour bamboo roots and shoots and enjoy up to 20 different species of bamboo including arrow bamboo, black bamboo, and water bamboo.

Pandas who live in captivity also eat fruit and seem to love apples the most. Some also like steamed corn bread.[3]

7 Symbol of friendship and peace 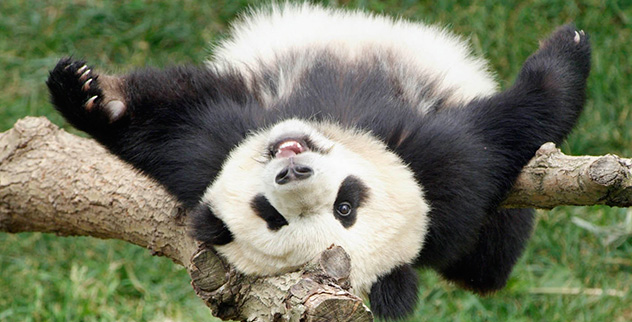 While poaching does happen, most Chinese revere the panda bear and consider them not only a symbol of good luck but also of friendship and peace. When someone encounters a panda, they often take to feeding them and if they are found to be injured, local authorities are alerted immediately.

The panda is sometimes compared to the symbolic yin and yang because of its distinctive black and white coloring and placid nature which is said to be a demonstration of a balanced, harmonious yin yang. The beloved bear is important in Chinese history with the Shangshu describing it as being invincible and ‘as strong as a tiger.’[4]

A panda’s pelt was once considered a magnificent gift for kings and emperors and, during the Ming dynasty, many believed that the panda had medical powers and could repel tumors and plagues. 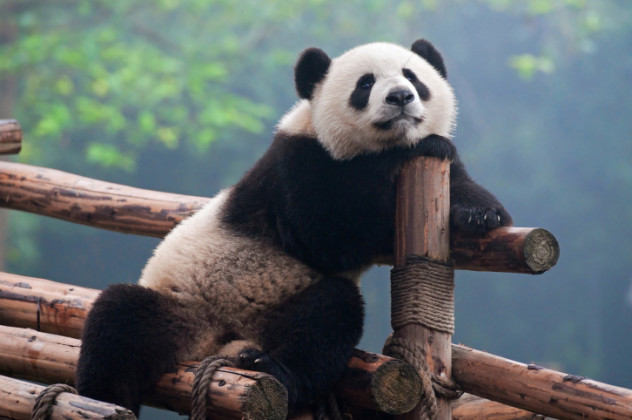 While pandas certainly resemble their bear counterparts in shape and size, they don’t roar like normal bears. They do however bleat, making a sound similar to that of goats, especially when mating. They can also honk, growl, or bark and cubs make croaking and whining sounds when they are hungry or want attention. All in all, pandas make about 13 different sounds.

Sometimes pandas also mark their scent by climbing a tree backwards with their hindfeet and urinating in a handstand position. This enables them to leave their scent higher up on the tree. 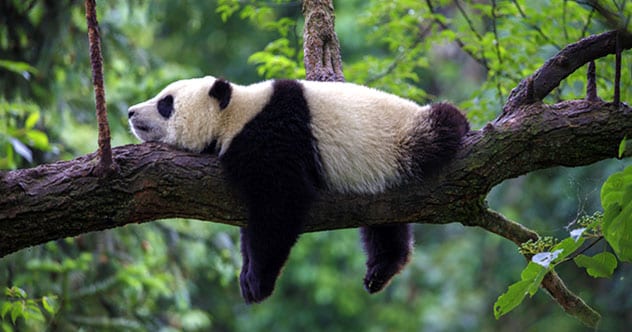 While their most distinctive trait is obviously their black and white markings, a panda’s fur does a lot more than just make them look cute. A panda’s face, neck, belly, and rump are mostly white to enable the animal to hide in snowy habitats. Its arms and legs are black to help it camouflage itself in shady spots. Their coat is thick and woolly to ensure protection against cold weather.[6]

Pandas can grow up to 150 cm in height and weigh up to 150kg. Males are usually around 10% bigger and 20% heavier than females. To sustain their bamboo diets, pandas have flat molar teeth that assists them in crushing the bamboo. They also have enlarged wrist bones that function as opposable thumbs which aids them in holding bamboo shoots.

What’s more, a panda’s eyes are different to those of other bears and not only because they have black patches of fur surrounding them. Pandas have vertical slits for pupils, the same as domestic cats. The dark patches aid in reducing daytime glare.

4 Pandas can become irritated and attack 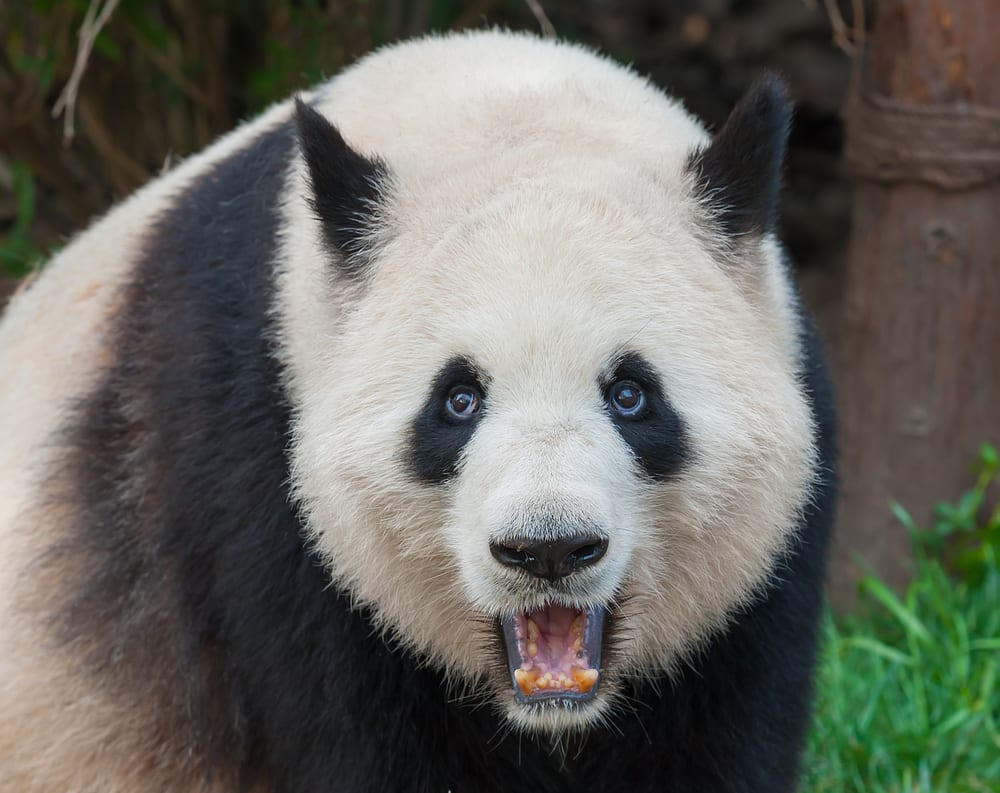 While a lot of time can be spent writing about the docile and adorable nature of pandas, it is a well-documented fact that they can quickly become irritated and launch attacks on humans who bother them.

Gu Gu the Beijing zoo panda had already bitten two people when Zhang Jiao fell into his enclosure after trying to catch a toy that his son had launched into it. Zhang and his son had been playing with a panda doll, throwing it back and forth, when his son threw the toy back a little too hard. When Zhang lunged at the toy, both he and it went flying into Gu Gu’s pen.

Gu Gu bit into Zhang’s left leg, chewed his way through it and then moved on to the right leg. The panda locked his jaws around Zhang’s leg and zookeepers had to make use of various tools to pry the bear’s jaws open. Zhang later said during an interview that he didn’t try to fight back because the panda is a national treasure and he loved and respected him.[7]

In 2017, Gu Gu attacked a 15-year-old boy who climbed into the pen to ‘get a closer look.’ Gu Gu also bit a drunken tourist who tried to hug him. Bizarrely, the tourist bit back. 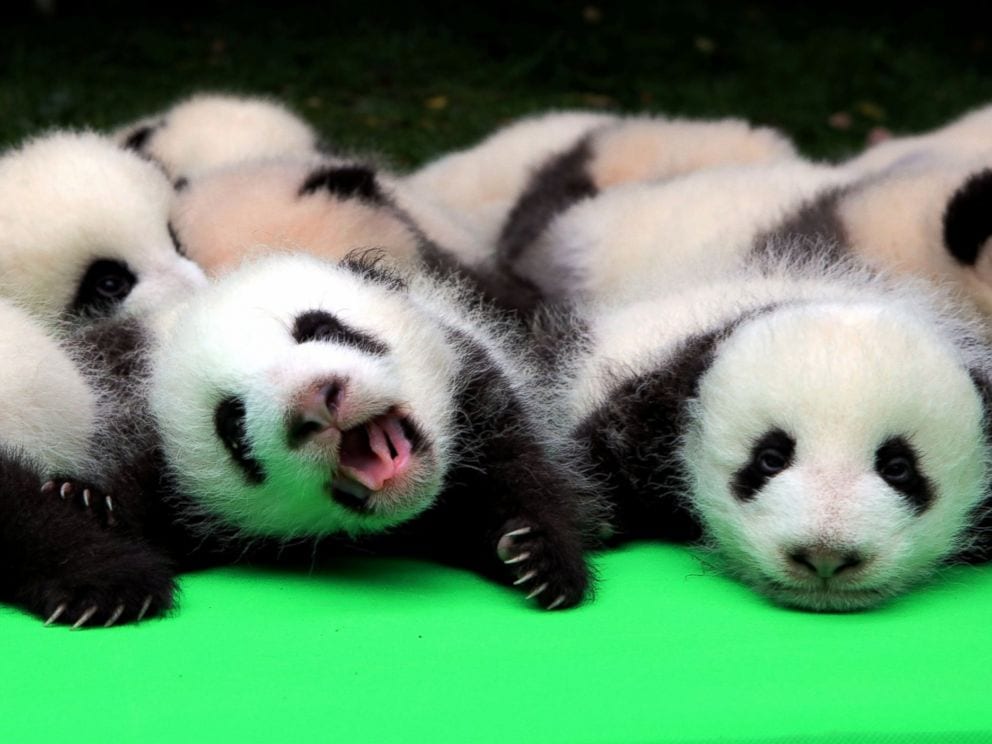 Every time a panda gives birth, especially to twins, zookeepers are ecstatic. Panda breeding is exceptionally difficult and so it becomes a major, global event whenever a baby panda is born. In 2015, a giant panda named Mei Xiang gave birth to two cubs at the Smithsonian National Zoo. The excitement was palpable and nearly 900,000 people tuned into the ‘Panda Cam’ during and after the event.[8]

Female pandas only ovulate once a year, giving a male panda a tiny 40-hour window to inseminate the female. Should the male panda fail in doing so, zookeepers have to monitor the female for a full year before another opportunity arises. Sometimes males are clueless as to how to mount the females, which also means a missed opportunity. For this reason, many zookeepers opt to artificially inseminate female pandas. However, in most cases, it is impossible for zookeepers to tell whether a female is pregnant until just before she delivers her baby. Some female pandas produce ‘pregnancy hormones’, build nests and sleep more often even when they are not pregnant. It is also extremely difficult for experts to locate a foetus by means of an ultrasound as they are so small. So small in fact, that sometimes the female’s stool is mistaken for a baby.

2 Discovery of the giant panda 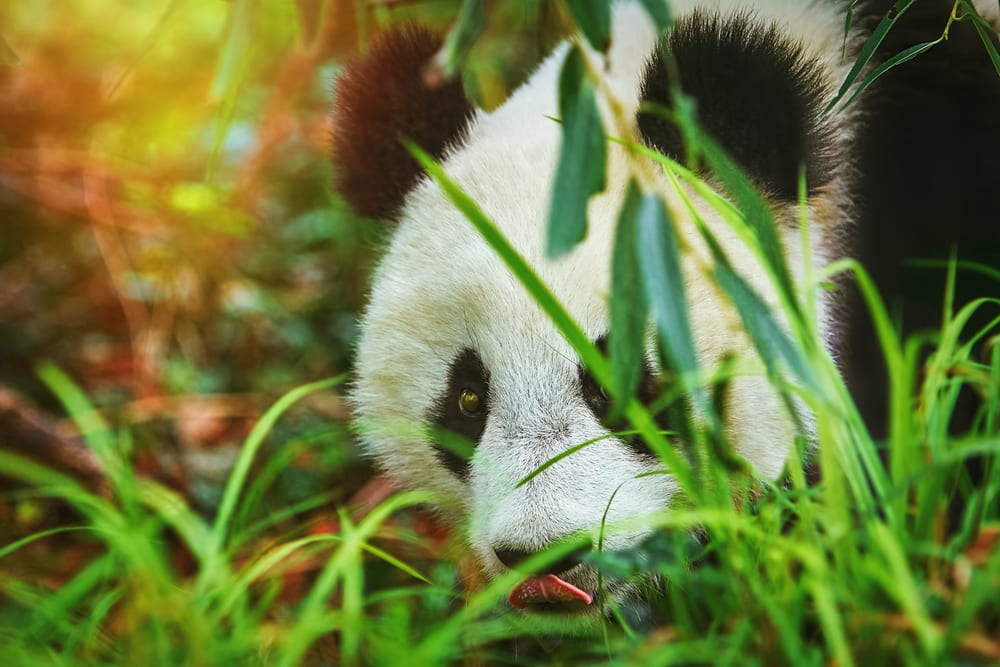 As recently as 150 years ago, only a few people had set eyes upon or even knew that the giant panda existed. The first Westerner to become aware of the existence of pandas was a French missionary named Armand David, who received the skin of a panda from a hunter in Sichuan on 11 March 1869. David is believed to have seen a live panda on 1 April 1869, making him the first Westerner to have encountered one. He attempted to send the animal to Paris, but sadly the panda died in transit. David proceeded to send a specimen to a Paris museum where a zoologist examined it. The zoologist, Alphonse Milne-Edwards, published a paper in 1870, declaring the panda a new species named “Ailuropoda melanoleuca.”[9]

The first Westerner to ‘own’ a live panda was German zoologist, Hugo Weigold, who bought a panda cub in 1916. Kermit and Theodore Roosevelt Jr. became known as the first Westerners to shoot a panda, which they did in the 1920s. 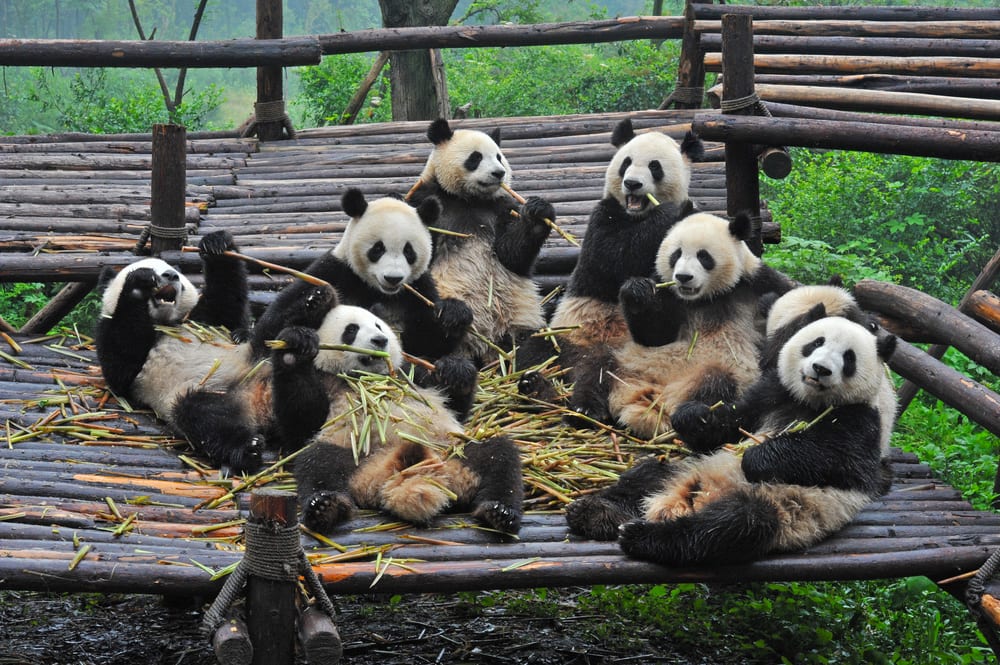 A national treasure in China, wild giant pandas have rebounded somewhat in the last few years and had their ‘endangered’ status updated to ‘vulnerable’ after a population growth of 17% in the past decade. The World Wide Fund (previously the World Wildlife Fund) protects wild pandas by securing their habitat and protecting it from human development and encroachment. The work of the WWF-China and its partners include the preservation of panda corridors across China, including 34 million acres, two large river basins and three provinces.[10]

The WWF has been working alongside the government since 1981 to implement initiatives to bring the panda back from the brink of extinction. Panda reserves protect two-thirds of wild pandas as well as bamboo forests located in mountainous regions. Along with protecting pandas, these measures also ensure shelter for a vast number of other species.