Superheroes, villains, and gods with bulging muscles all form part of the action. What more could we ask for when it comes to movies such as Iron Man, The Avengers, Spider-Man, and Thor?

Some fans delight in finding Easter eggs in their favorite superhero flicks or discovering clues that may just prove certain fan theories correct. So they binge-watch these movies several times to connect seemingly loose threads and build theories around the films.

Here are 10 of the most outlandish fan theories that surround Marvel’s most popular superhero movies.

Spoiler Alert: If you haven’t seen these Marvel movies, be careful. We’ll reveal information you may not want to know . . . yet. You’ve been warned. 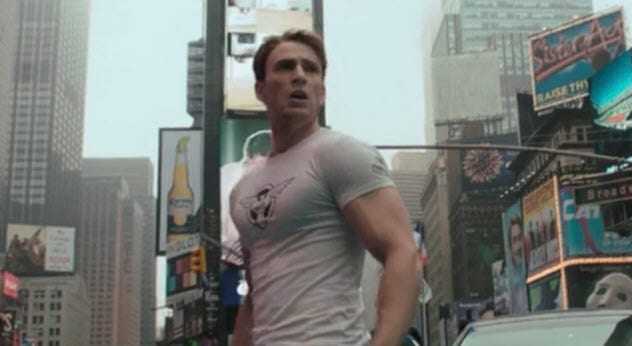 Binge-watching Marvel flicks during lockdown has led to the rise of an “appropriate for the times” fan theory. During a scene in Captain America: The First Avenger, Steve Rogers finds himself in Times Square in New York City. The billboards behind him reflect a bottle of Corona beer and what looks like an image of a virus. Immediately, a theory was born that claimed the movie had predicted the current coronavirus pandemic.[1]

The theory was short-lived, however. Film critic William Mullally did a little investigating and found that the picture of the “virus” was a top shot of dry spaghetti sticks. Even though this theory was debunked on the Internet for all to see, some people are adamant that the virus theory is true. 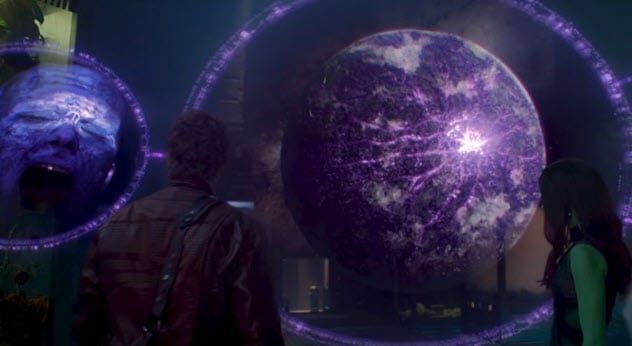 In Guardians of the Galaxy, the Collector explains the creation of the Infinity Stones to the film’s heroes. These stones form a major part of the plots in Avengers: Infinity War and Avengers: Endgame.

While the Collector scene plays out, the history of the universe and the stones is depicted in the background. This has led to a whole new fan theory. It speculates that one of the planets in the scene is Taa, home of Galan. He is a humanoid who becomes Galactus, the Devourer of Worlds.

During the sixth incarnation of the Multiverse, Galan became the sole survivor when the universe’s renewal cycle was completed. He then merged with the essence of the Sentience of the Universe and became Galactus.

According to the theory, the Sentience of the Universe is what is seen in the Collector’s lecture about the creation of the stones. Some fans also believe that the design on Galactus’s helmet can be seen on the Celestial’s staff.[2]

If this theory about the origin of Galactus had turned out to be true, then the final Easter egg in the movie was solved—after a fruitless four-year search by hard-core fans.

Alas, director James Gunn shut down the rumors in 2018 by replying to a tweet: “Getting lots of messages about Galactus in the Collector scenes. No, he’s not there in any way.”

After Avengers: Infinity War hit theaters in 2018, fans drove themselves crazy trying to come up with plausible theories about which hero in the upcoming Avengers: Endgame movie would be tasked with killing the purple supervillain, Thanos.

One of the craziest theories said that Ant-Man would be the perfect superhero to end Thanos. Ant-Man could easily do this by shrinking down to ant size, flying up Thanos’s butt, and then expanding. This would have “blown up” the villain from the inside.[3]

Luckily, the creators of Endgame chose a different and far less gross way to get rid of Thanos.

7 Brother From Another Mother

It seems that the Marvel Multiverse brings out the ultimate creative side of its fans. When Tony Stark and Steve Rogers became enemies in Captain America: Civil War, loads of theories (beyond the obvious) emerged to explain the bad blood.

For some people, blood had everything to do with it. Some theorized that Peggy Carter, love of Captain America’s life, was the mother of Tony Stark (aka Iron Man). Supposedly, the flirtatious way that Howard Stark (Tony’s father) speaks to Peggy during The First Avenger movie could have led to them getting together after Captain America crashes into the ice and is presumed dead.[4]

However, the timelines don’t work with this theory. In addition, writers for the Marvel Cinematic Universe (MCU) movies have confirmed that the intent was always for Peggy’s two children to have been fathered by Captain America.

In Spider-Man: Homecoming, it is apparent that Peter Parker (aka Spider-Man) is somewhat afraid of heights. By combining this with scenes depicting skyscrapers, planes, and debris, some fans theorize that Peter’s parents, who lost their lives in a plane crash, actually died in one of the planes that rammed into the twin towers of the World Trade Center on September 11, 2001.

However, this idea isn’t plausible as the MCU has its “own version of 9/11” called “the incident,” which is the alien invasion that occurs in the first Avengers movie. The invasion, led by Loki after he is mind-controlled by Thanos, results in the mass destruction of New York.[5]

5 Doctor Strange And The Snap

Some movies thrive on outing the good guy as actually being the bad guy toward the end of the film. In the MCU, it is fairly clear who’s good and who’s bad, but a dark theory aims to turn that ideology on its head.

Doctor Strange, sorcerer and primary protector of Earth, is said to have been behind the jaw-dropping event that saw Thanos snapping his fingers in the Infinity Gauntlet and eliminating half the universe.

According to this theory, Stephen Strange wanted to rid Earth of Thanos as well as Iron Man, Vision, Hulk, Thor, and the Infinity Stones. Strange saw them all as threats to the existence of the planet. But in the end, he succeeded only in getting rid of Vision and Iron Man.[6]

The theory is greatly expanded when considering the rationale behind the demise of each hero and villain (according to Strange). This includes Tony Stark being reckless, Vision being an abomination, Hulk being a loose cannon, and Thor being unable to save his own planet and therefore unable to save Earth. Furthermore, the Infinity Stones posed a threat to reality. By ridding Earth of them, reality would be safe.

It has even been theorized that Doctor Strange didn’t really disappear after the snap. Instead, he faked his own vanishing. 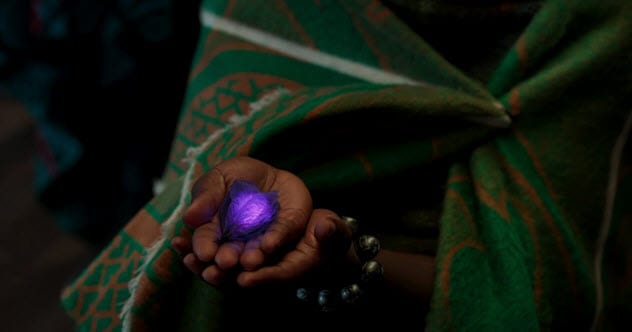 During the Battle of Wakanda in Avengers: Infinity War, Captain America and Black Panther lead the charge against the Black Order and the Outriders. This scene gave rise to the fan theory that the two heroes have similar powers and that they both received their powers from the Heart-Shaped Herb.[7]

Captain America’s power comes from the Super Soldier Serum, which was created by Dr. Abraham Erskine. The doctor’s first attempt to make a super soldier failed, leading to the creation of the Red Skull. After teaming up with Howard Stark, Erskine perfected the serum. Thereafter, the formula was successful in turning Steve Rogers into Captain America.

Howard Stark gave Captain America his infamous shield, which is made of vibranium. However, vibranium is only found in Wakanda. So, according to this theory, Stark would have been the one to hear about Black Panther’s powers and eventually acquire the Heart-Shaped Herb to perfect the Super Soldier Serum.

Thor: Ragnarok was a highly anticipated installment in the vast range of Marvel movies. Soon after it was released, fans raved about how funny the movie was. However, despite the ongoing humorous moments, an undercurrent of darkness included the deaths of Odin and the Warriors Three, the release of Hela, the destruction of Thor’s hammer, the ultimate loss of Asgard’s army, and the complete ruin of Asgard at the end.[8]

A Reddit fan theory suggests that the story of Ragnarok is told by Thor in lighthearted fashion to water down the terrible events that transpired throughout the film. He does this to cheer up the Asgardian refugees and to keep himself sane after the loss of his father and the devastation that was unleashed upon Asgard.

Could this mean that Thor also fabricated some details of his fight against Hulk?

When Avengers: Infinity War was released in 2018, a collective gasp reverberated in theaters around the world when Thanos plopped the final Infinity Stone into the Infinity Gauntlet, snapped his fingers, and the heroes, one after the other, dissolved into dust. With a scene as shocking as that, it is no wonder that a host of fan theories saw the light as soon as the credits started rolling.

Another mind-blowing scene in Infinity War shows Hulk battling Thanos and losing badly. Most fans couldn’t wrap their heads around this considering Hulk’s notable strength in Thor: Ragnarok. Even before that, Hulk had pummeled Loki as if he were nothing.

A popular fan theory proposes that Hulk was becoming weaker as Bruce Banner got stronger and started to take over Hulk’s body. By the time the events of Infinity War roll around, the Hulk is sufficiently weakened and unable to stand against Thanos.

In Avengers: Endgame, the Hulk we know is gone forever. In his place, we are introduced to Professor Hulk, who looks a lot like a huge, green Bruce Banner but is lacking brute strength.[9]

Avengers: Endgame broke records worldwide after its release in 2019. One of the most anticipated superhero movies of all time, it would finally provide insight into the ultimate fates of many beloved characters. It was also the first movie that saw Captain Marvel fight alongside the Avengers.

In one scene, Thor is looking at Captain Marvel as if to size her up. When he gets up to stand right in front of her, she meets his unwavering gaze. Even when Stormbreaker flies toward Thor’s open hand at incredible speed just inches from her head, Marvel doesn’t flinch. Thor cements his “approval” of the new addition by stating: “I like this one.”[10]

A slightly eerie theory has it that when Captain Marvel turns around to face Thor, she whispers, “I have telepathy.” Apparently, these words can only be heard with the volume turned up to 400 percent audio.

However, directors Joe and Anthony Russo have shot down this theory. They said it was not part of the many Easter eggs buried in Marvel films.