Let’s be honest, we all love a good meme and in recent years memes have exploded into an amazing art form that has helped shape today’s society. Whether it be a silly joke from your friend or a slew of them on your social media, there is no doubt that they have had an effect on your life. They are a great outlet for people to connect with one another and express emotions and feelings that are otherwise hard to describe with words. Memes are a very flexible media and you would be surprised that some of your beloved memes may even have some disturbing backstories. Bring your attention here and discover the dark truth behind some of your favorite memes! 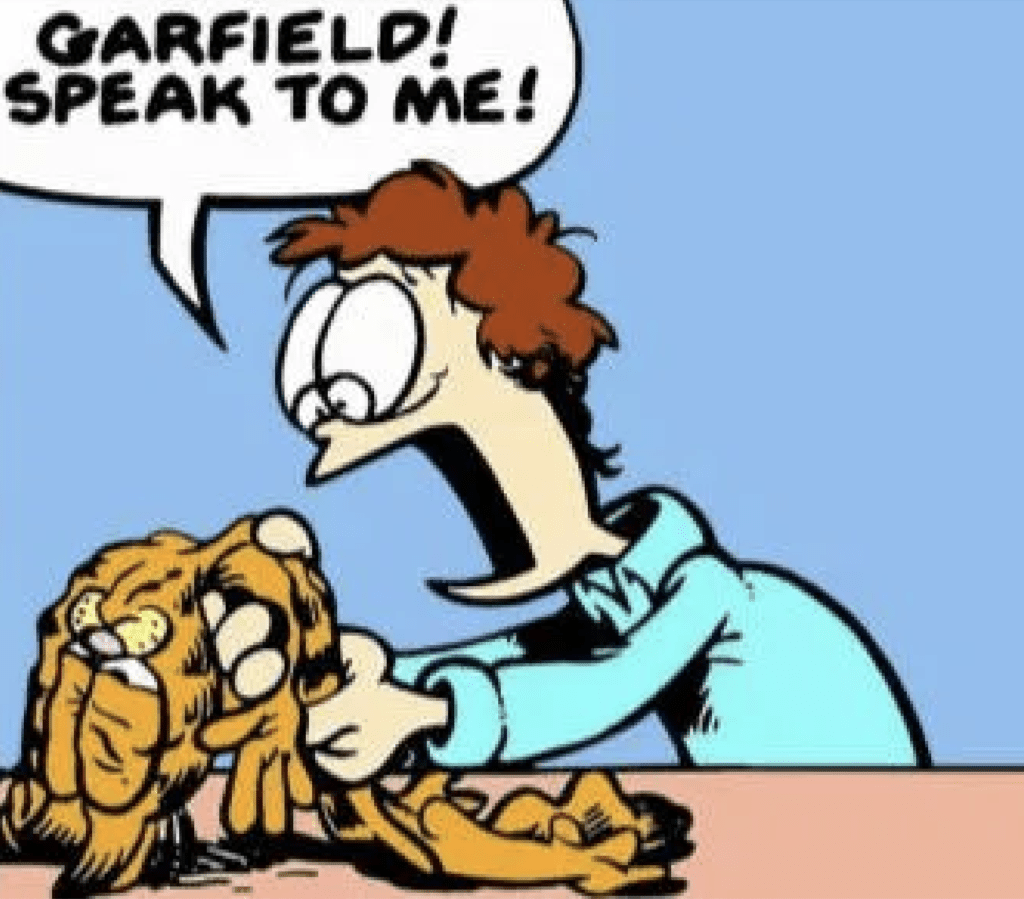 To start this list off, let’s take a look at the Deflated Garfield meme. It takes the final panel of an original Garfield comic and takes it out of context to make a surprisingly funny meme. Though the image is used to create joy, the original picture depicts the limp and lifeless corpse of Garfield with Jon practically begging him to be alive. The actual imagery is often overlooked as we just see a flat Garfield, but the comic in which it first appeared is actually Jon going through a horrific experience. Though, the reason this image is able to be turned into a meme is through the overexaggerated facial expression of Jon and Garfield’s very uncaring manner. This secretive meaning allows for a greater interpretation and the access into meme culture. Garfield’s complete deadpan state works as a great punchline.[1] 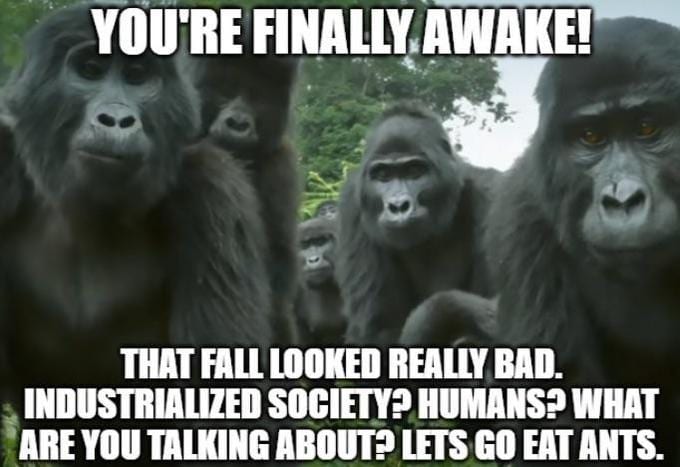 This meme makes fun of all of the current issues in society and pretends to take you back in time when things were simpler and happier. In this format, it usually takes a certain niche from the past, something very prominent in the time it is trying to represent (Usually the early 2000’s). We all know that 2020 has had many downs and this meme gives a bit of a reprieve from it, hitting you with a wave of nostalgia that does all but physically bring you back to the good old days. While this meme may seem innocent enough, it is only successful due to the terrible times that we are currently in. It is built off of the backbone of our distress and misfortune but tries to make it better. Although it has good intentions, it is definitely hard to overlook exactly what makes it so popular.[2] 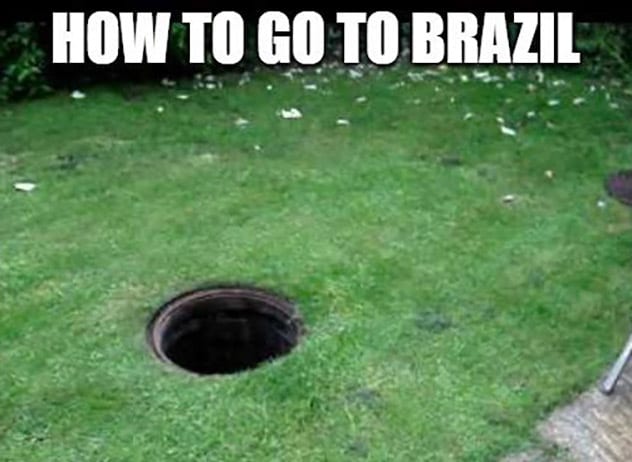 This next meme is the perfect example of jokes having some truth behind them. The Going to Brazil meme is a case of scary funny, the same way we laugh during horror movies or as a defense mechanism. This meme is a satirical take on a rather awful occurrence in real life. Kidnapping is a real thing and Brazil is somewhat known for it. This meme often depicts a 1st person view of a rather crazy scenario that is supposed to represent the journey to Brazil. So while this meme is rather funny, it is definitely based on something much more serious. Its dramatic and exaggerated portrayal is key to its success and is reminiscent of some more recent and popular memes as well.[3] 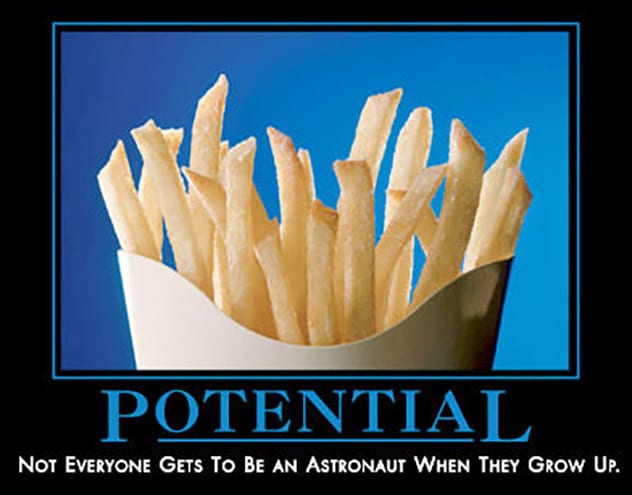 The “Demovitational Poster” is next up and this meme has a lot of history behind it. The beginning of this format dates back as early as the late 1990’s. Since then, this meme has warped and changed with the times, to a point at which it is almost unrecognisable from its first iterations.
This meme was created by a company by the name of “Demotivators” and its goal with this format is to criticise and make fun of the motivational posters that are usually hung up around an office. Since it is well known that those posters do not do their job very well, a group decided to go against the current and poke some fun at the depressing nature of the workplace. These demotivational posters bring to light real issues with working a 9-5 and the hopelessness one may feel when stuck in one.[4] 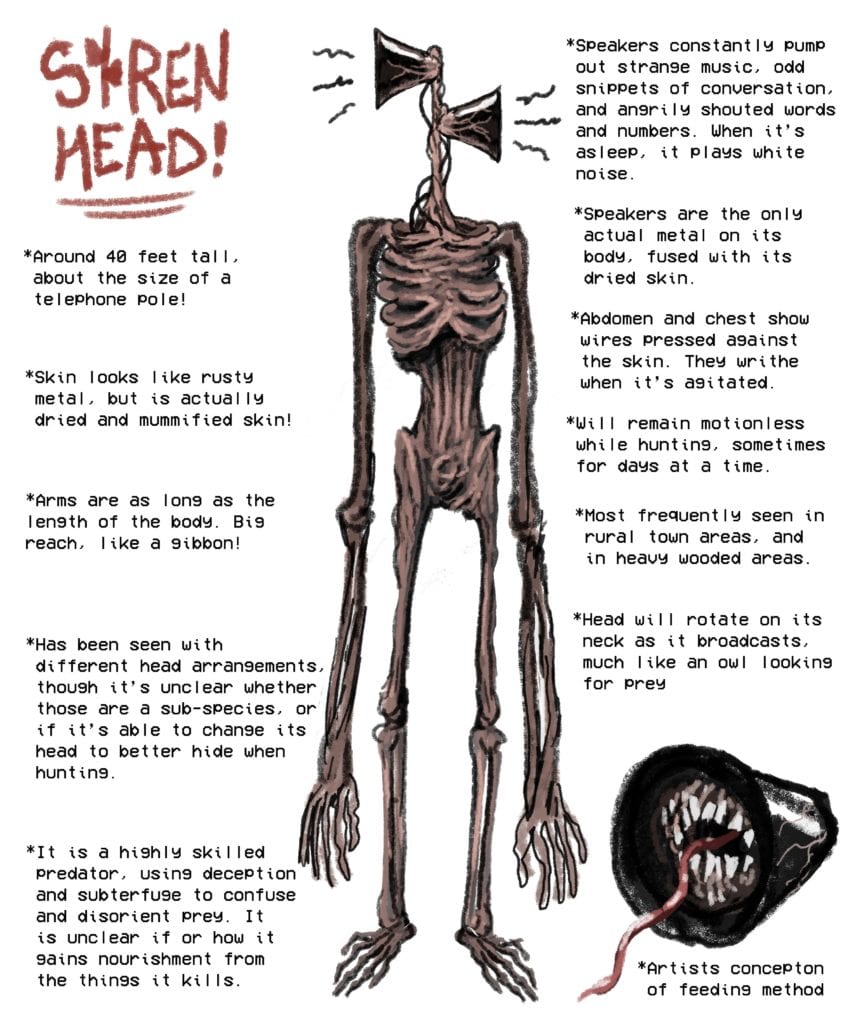 Sirenhead originated back in 2018 as a piece of art by Trevor Henderson. His goal was to essentially design a new monster and since then has gained quite some popularity. Memes featuring Sirenhead usually poke fun at his design or in some cases have him dancing to popular music. The stark contrast between what he’s supposed to be (dark and scary) and his presentation in meme culture (fun and lively) make for a great joke and has potential to continue in many different environments. You may not know this but Sirenhead also has a darker past, being involved in some creepypastas, which are scary stories found on the internet. These stories depict him in a much darker light with him being the main antagonist, causing mayhem and misery.[5] 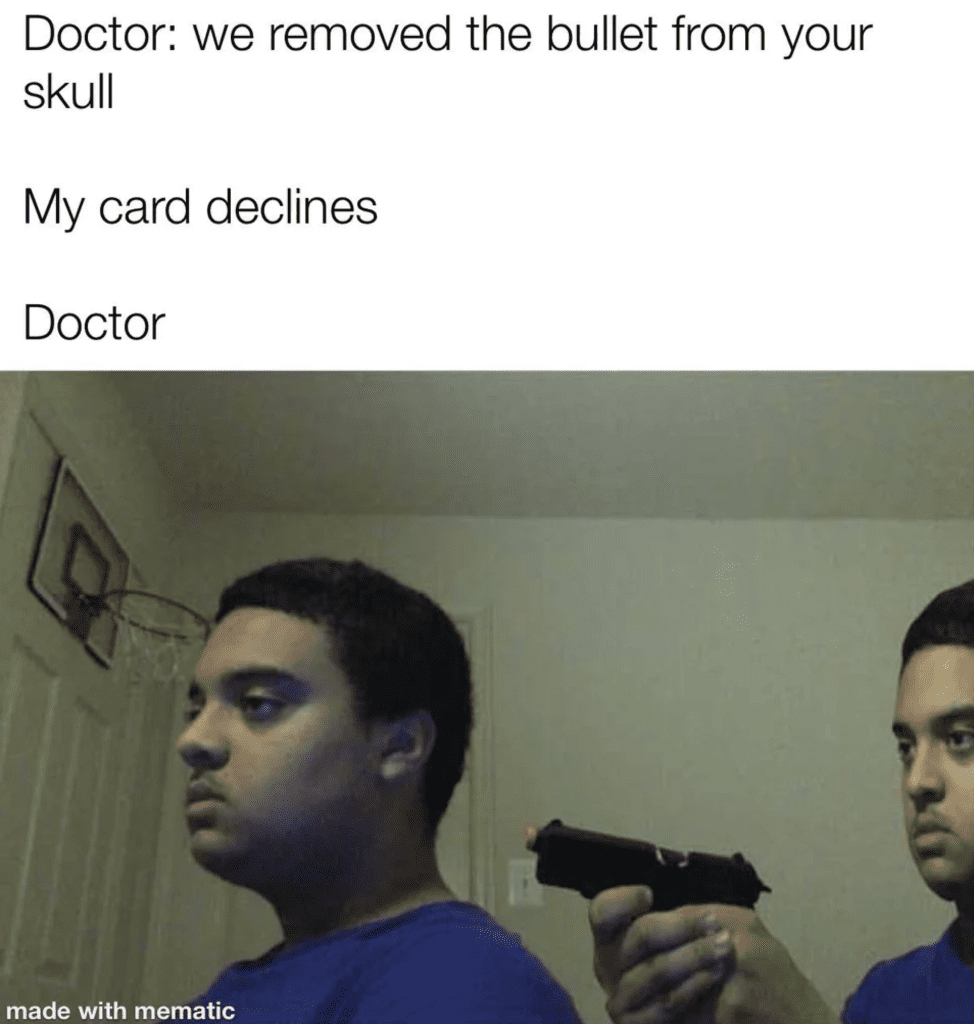 In this meme, if your credit card declines, whatever you may have purchased is automatically refunded. Now this meme probably wouldn’t have made it to this list if what was purchased was only items like skittles or soda but instead it is something a lot more serious. In most cases of this meme, it shows someone’s credit card declining after they have ordered a rather large hospital procedure. For example, a doctor may remove a bullet from a patient’s body, but when his credit card declines, the doctor simply shoots the patient as a sort of refund.

This meme usually takes images from popular media to relay this message such as Star Wars or Looney Tunes to create a sort of familiarity between the meme and the observer. While this may seem over the top (for which it is), it also highlights the unfair and harsh nature of the U.S.A’s health care system. While a lot of countries have free health care, the States are quite the opposite and charge quite a premium for basically any procedure. In a lot of instances, these bills are unable to be paid by the patient and can lead to debt that is almost worse than the “refunds” in the memes.[6] 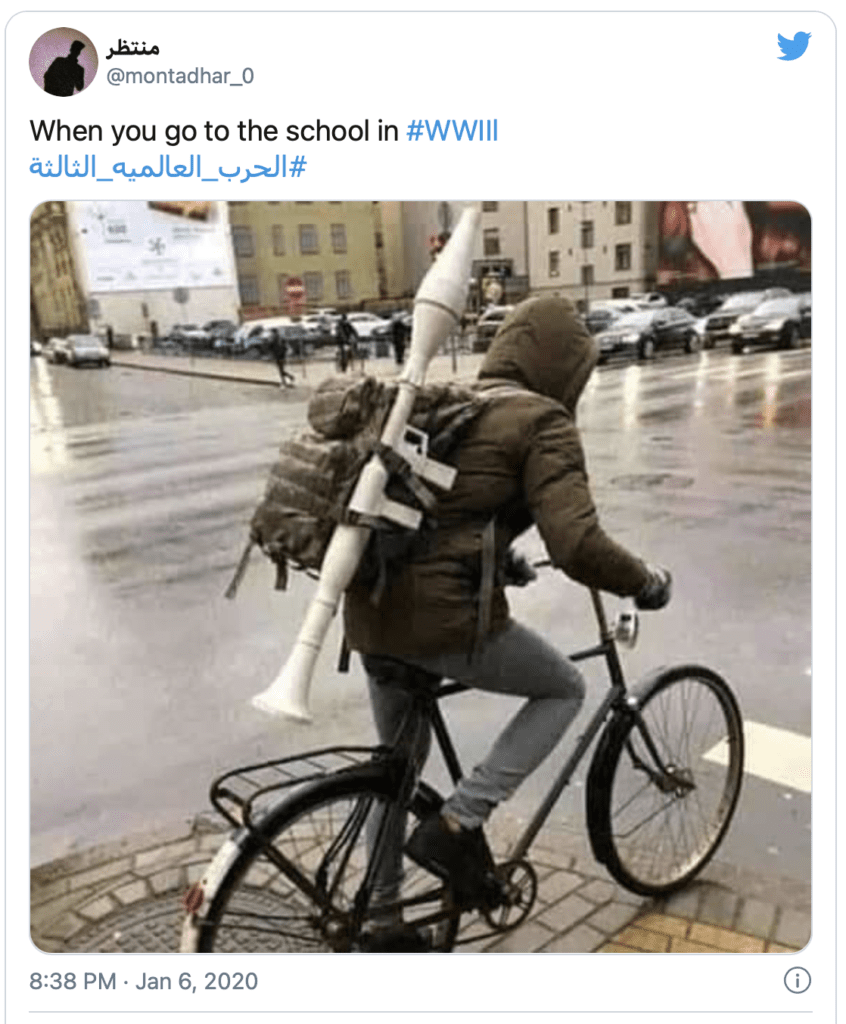 WW3 memes were brought to light in the first few months of 2020. These memes were making fun of the current political climate at the time, as tensions were high between countries and the threat of a third world war had a scary potential. Looking back on it now, this meme seemed to be a coping mechanism for us as a whole, a way to vent and cope with our concerns through humor. So while they are rather humorous, they are built upon the fear of a very dark and scary reality. Luckily WW3 did not come at this time, or else these memes would have a lot darker of a memory. These memes did not stay around for long either as they quickly faded as the months passed and they became stale as tensions eased.[7] 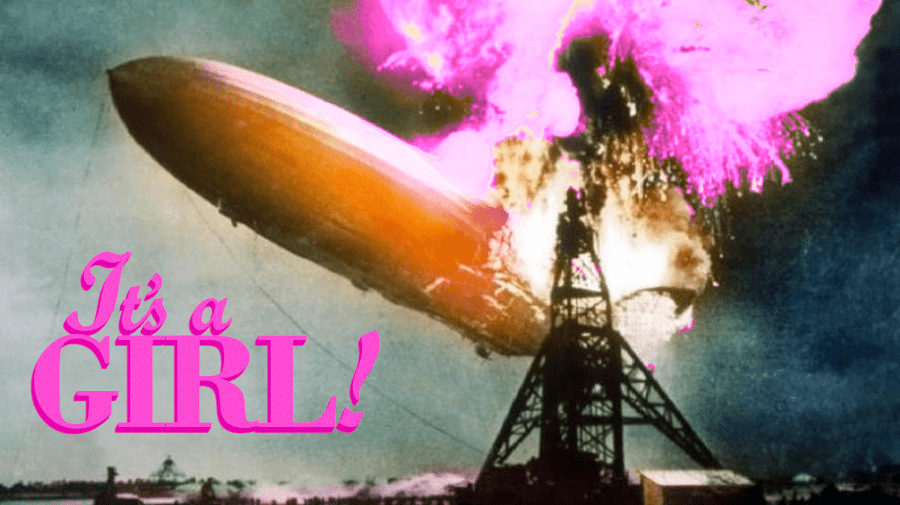 Gender reveal parties have been a rather new staple being seen as early as the late 2000’s. Since then they have changed and evolved, first starting out as a small gesture to reveal the gender of a new baby. Early examples of this may be a cake made out of pink or blue dough so that you recognise the gender only after cutting through the cake. Through the years this did not remain the norm as young parents kept on going for bigger and louder ways of announcing their child’s gender. As time went on people started experimenting with popping balloons with guns or using fireworks to celebrate the big reveal. With this, you of course had fires start to break out and cause some serious damage to the surrounding area due.

This meme makes fun of the serious issues and damage such a simple idea such as a gender reveal has caused. Again, this contrast between the intention and result make for some great irony, but as you can see this meme in particular is steeped in rather dangerous, and potentially life endangering activities.[8] 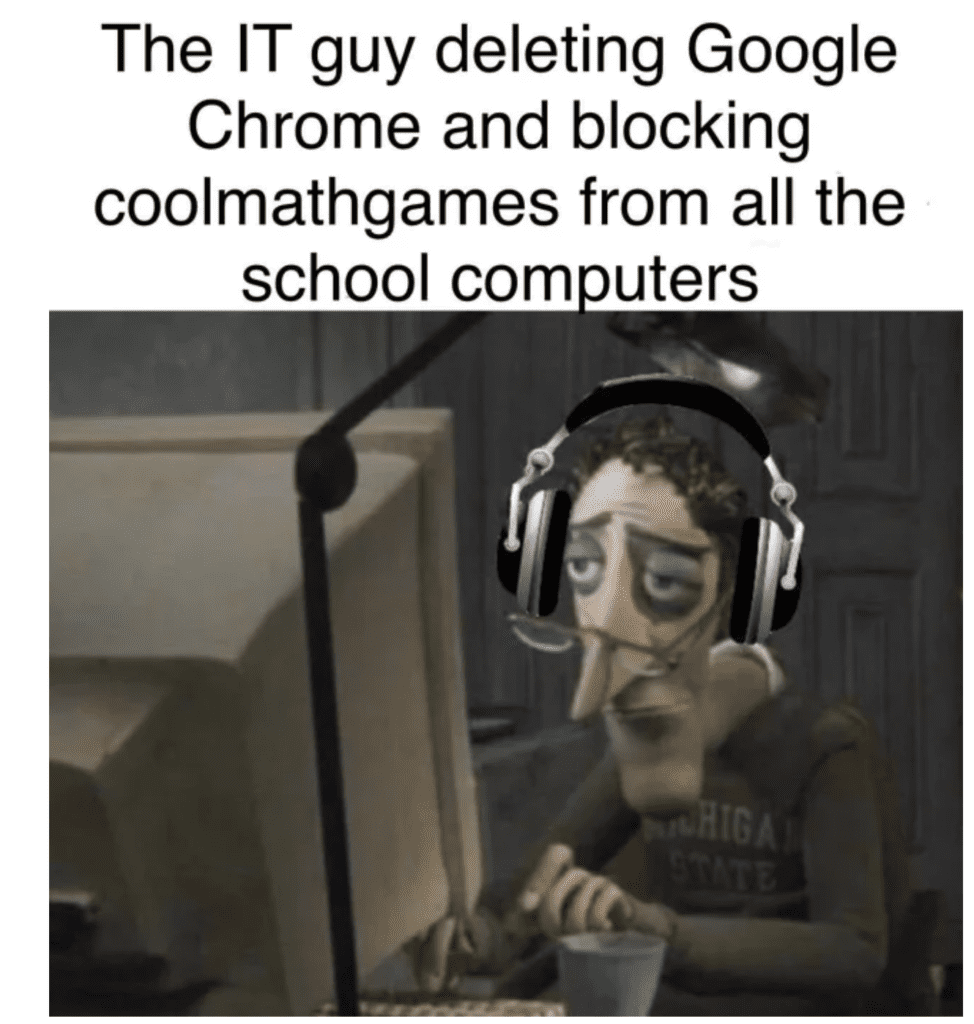 The Dad from Coraline is another great example of taking a dark concept and turning it around so that it’s funny. The beautifully detailed depiction of the Dad lets you fully understand how he feels and in most cases, people on some level can relate to it. This meme attempts to take that hollow or depressive feeling we all get sometimes and turns it into a joke. Reminiscent of using our humor to deter our concerns for a third world war. While this image has been used in numerous ways to make a joke, it is unavoidable to recognise the darker, empty feeling that it was created with and shows. It makes fun of the nature of this generation, with our general confusion and sadness that we internalize, but this meme allows for some relief as we can relate to it rather well.[9]

1 Don’t Turn Me Into Marketable Plushies 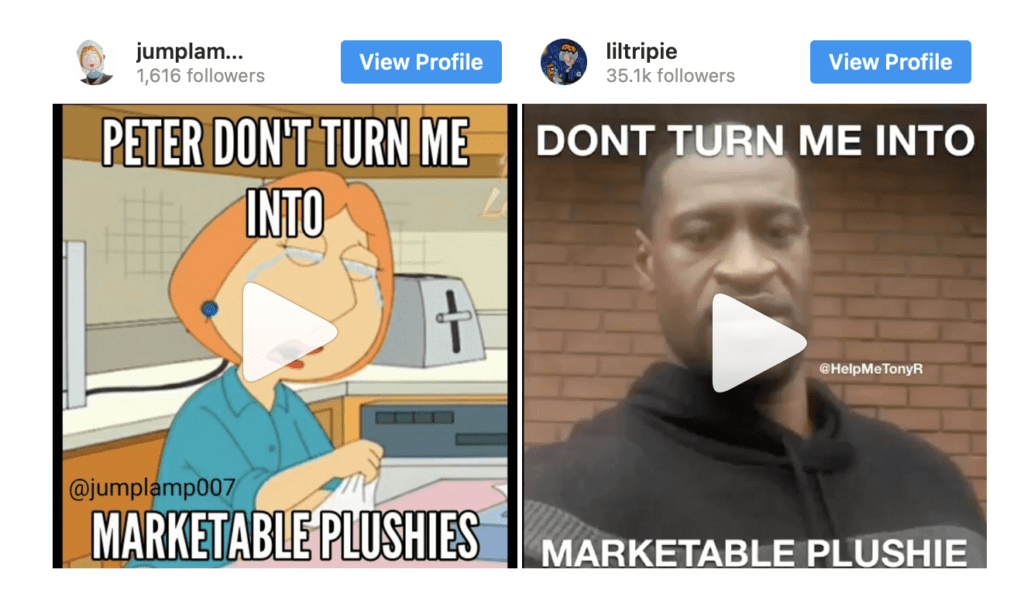 Now this is a rather niche meme, one that is not as widespread as the others, but is still very interesting. This meme takes popular characters from across all media and uses them to satirize capitalism and the greed of the corporations that have created these characters. This meme takes the character and has them beg not to be turned into a stuffed animal, effectively stripping them of their personality. These stuffed animals do not at all capture the spirit of the character they are created after and is a great comparison to how a big corporation will abandon their personality for monetary gain. It goes to represent the real values of these companies, which is rather disturbing.[10]