In addition to regular discounted merchandise, thrift stores often stock unusual and sometimes even creepy items, making browsing in resale shops an adventure. Occasionally, customers or employees will find things that are shocking because they may be evidence in a crime. Some of these items are weapons, while others are random objects like furniture or clothing that could be used to solve a crime.

Here are 10 examples of people finding potentially crime-related items at a thrift store.

Related: 10 Types Of Evidence That Are Less Airtight Than We Thought 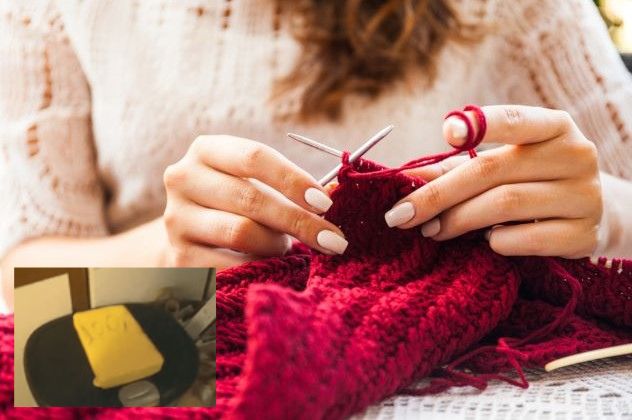 A crochet kit is one of the last places anyone would expect to find a container of illegal drugs, but that’s precisely where a Seattle woman discovered a kilogram of cocaine in 2021. Planning a project to make animal hats, she bought the packaged crochet kit from a Goodwill store. However, when she brought it home, the woman found an unexpectedly heavy item wrapped in yellow rubber with 100% written on the outside. The most suspicious thing may have been the peculiar odor coming from the item.

The woman called 911, and police took the package, later identifying it as cocaine. They then proceeded to investigate.

A spokesperson for Goodwill issued a statement that said, “The safety of our customers and employees is our first priority,” and that Goodwill’s policy “is to keep hazardous, dangerous, or recalled materials away from our stores….”[1] 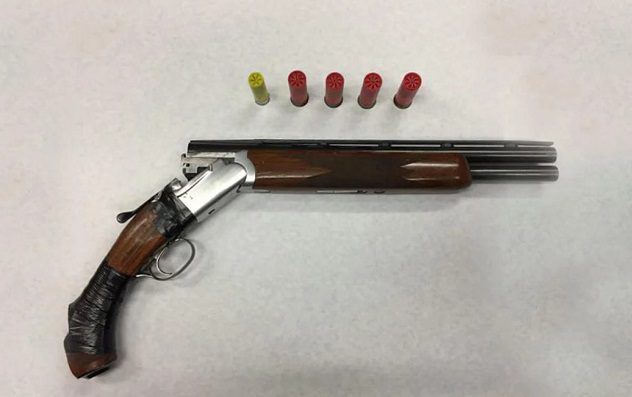 A surprising number of guns have been given to resale shops over the years. These weapons, which are usually donated anonymously, aren’t necessarily involved in crimes, but sometimes there are indications of possible foul play. In 2011, volunteers at a church-run resale shop, the Knox United Clothing Thrift Store in the town of Didsbury, Alberta, Canada, found an unloaded sawed-off .22 caliber rifle at the bottom of a clothing bag that was wrapped within another bag inside a donation bin. While the gun may have been donated by mistake, another obvious possibility was that someone was trying to dispose of it intentionally. This was something addressed by Sgt. Jeff Jacobson of the Didsbury RCMP, who said, “The fact that the rifle was sawed off is concerning; it may have been involved in an offense.”

The gun was sent to a forensic laboratory for ballistics testing and analysis to determine if it was connected to a crime. Whether or not the firearm was actually used in a crime, the fact remains that the weapon was prohibited under the law because it was sawed off, meaning the barrel length was cut below the minimum length allowed.[2] 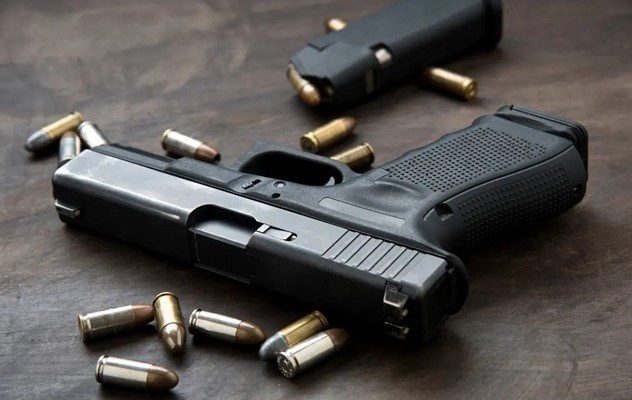 Another suspicious firearm donation was made when two handguns, a Glock 36 and a Browning “pocket pistol,” were found inside a bin for the thrift store Value Village in Puyallup, Washington. The Glock was not reported stolen, but interestingly, part of the serial number for the Browning had been taken off. One theory that immediately comes to mind is that someone wanted to ditch these guns to prevent them from being used as evidence. While it is not clear where these weapons came from or what prompted this sinister gift, Value Village decided to donate the guns to the evidence bin at police headquarters.[3]

Occasionally, we will hear about someone discovering a real treasure at a thrift store and paying only a small fraction of its actual worth. This is exactly what happened to Laura Young, an antique seller on eBay, when she found an ancient Roman bust for $34.99 while she was browsing at a Goodwill store in Austin, Texas. But in this case, Young was eventually compelled to give up her amazing find, which turned out to be a stolen work of art.

The marble bust, estimated at about 2,000 years old, is believed to represent Roman military leader Sextus Pompey and has been traced back to a Bavarian king’s villa, which was bombed in World War II and later looted. While the story of how the bust turned up at a Goodwill store in Texas is unknown, one likely explanation is that an American soldier took it during the looting and brought it back to the U.S.

Learning about the circumstances surrounding the sculpture’s disappearance from the villa, Young, who is not considered the rightful owner, had no intention of keeping or selling the sculpture. It was disappointing to part with the statue, but after residing in Young’s home for almost four years, it was temporarily put on display at The San Antonio Museum of Art with an agreement to send the bust back to Germany in 2023.[4]

In 2017, the employees of a Goodwill store in Monroe, Washington, were surprised to discover five large bags of marijuana inside a donated cooler. The most shocking part was the amount of marijuana in the stash, 3.75 pounds (1.7 kilograms), with an estimated street value at the time of $24,000.

This much pot was well over the limit in Washington, where it is legal for someone over 21 to possess up to one ounce (28 grams) of cannabis. It seems very unlikely that anyone intended for the marijuana to be included in the donation. It is assumed that whoever dropped off the cooler forgot it was stored inside. Police tried to find the owner of the cooler and viewed surveillance footage, but it was unclear whether it was donated at this particular location or at a Goodwill trailer in another town.[5]

In 1995, the owners of the second-hand shop Just About Everything in Linden, New Jersey, were going through the belongings of an elderly woman who had recently passed away when they noticed something odd. Most of the clothing from Mrs. Zarinsky’s closet looked typical for a woman of her age but mixed in were three halter tops that looked like something a young girl would wear.

The halter tops could actually be links to murders committed decades earlier by Mrs. Zarinsky’s son Robert who was already serving a 98-year sentence for killing a 17-year-old girl in 1969. His mother had a history of going to shocking lengths to protect Robert from the law. At one point, she personally removed bullets from his body and subsequently hid him from the authorities after he had allegedly killed a police officer.

Following Mrs. Zarinsky’s death, the police searched through boxes at the second-hand store containing clothing, jewelry, and other items from the Zarinsky house, hoping to find clues in the unsolved murders of four teenage girls in the late 1960s and early 1970s. Less than a year after facing charges in the 1968 death of 13-year-old Jane Durrua, Robert Zarinsky died in prison in 2008 without being convicted of any additional homicides, even though he was the prime suspect in a number of murders.[6]

In the case of notorious serial killer, rapist, and kidnapper Richard Ramirez, dubbed the Night Stalker, an item from a thrift store did not become evidence until after he purchased it. An AC/DC hat, which was found at one of the crime scenes, was linked to Ramirez through a witness who said she remembered seeing him buy it at a thrift store. The hat, along with other physical evidence such as a jacket, sunglasses, and a shoe print, led to his arrest.

This brutal criminal, who preyed on men, women, and children across California in the mid-1980s, had a habit of breaking into homes through unlocked doors and windows. After being convicted in 1989 of 43 charges, including 13 counts of murder, he was sentenced to the gas chamber but died from complications related to B-cell lymphoma after almost 24 years on death row.[7]

Providing a strange and ironic twist on the theme of drugs given to thrift stores is a 2022 incident involving police in Berthold, North Dakota. Officers accidentally donated a bag of cannabis to an organization that operates a chain of thrift stores. The cannabis was evidence from a case that had been recently closed, and law enforcement was planning to dispose of it. However, instead of being destroyed, it was mistakenly loaded onto a truck with toys and clothes donated to the Dakota Boys and Girls Ranch, a Christian treatment and educational center which manages 10 thrift stores.

Recreational cannabis is illegal in North Dakota. When the weed was spotted by a worker who was going through a bag of donations, the Ward County Sheriff’s Department was contacted. The sheriff’s department secured the evidence, and the cannabis was returned to Berthold Police, who disposed of it properly this time.[8]

It’s hard to find evidence of wrongdoing more compelling than photos of the crime itself that were taken as it was being committed. In 2016, a 48-year-old man named Gary Sovie was charged with rape after some very disturbing Polaroid pictures were found in a tote bag that was donated to a Salvation Army thrift store in Columbus, Ohio. When the staff members came across the shocking photographs, they called the police, who confronted Sovie.

The images show sexual activity between an adult and a small prepubescent child, believed to have been a toddler at the time of the abuse. Sovie admitted that he took the pictures of himself with the little girl. According to the police report, Sovie told detectives: “I am a sick person. That was me. Just put a bullet in my head.”

In addition to the photos, the tote bag also contained pieces of mail that led the police to Sovie. Detectives have speculated that the child in these pictures may not be Sovie’s only victim. He was later sentenced to 17 years in prison.[9]

1 Human Remains in a Suitcase 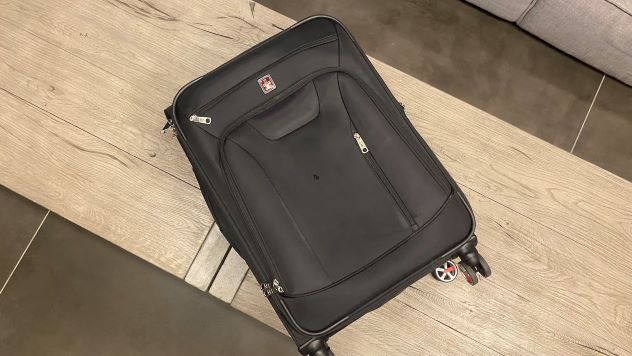 There are many stories about skulls, skeletons, and urns with ashes winding up at a thrift store. In most cases, these findings are not believed to be connected to a crime. Much more gruesome and suspicious are the rare instances of fresh human remains discovered at one of these venues.

In 2015, a headless, limbless human torso was found in a suitcase dumped near an entrance to a San Francisco area Goodwill store, while part of a leg and foot were in a nearby trash can. Strange things are often discovered inside luggage dropped off at resale stores, but this may be the creepiest and most shocking.

Police tried to locate a person of interest who was visible on footage from surveillance cameras. After pictures were released to the public, an anonymous tip led police to the man thought to have dumped the body parts, 54-year-old Mark Andrus, a small-time drug dealer. DNA testing revealed the human remains to be those of 58-year-old Omar Shahwan, who happened to be Andrus’ friend and former roommate.

Shahwan’s death was eventually ruled a homicide. Even though there wasn’t enough evidence to charge Andrus with murder, and Andrus himself died suddenly from the effects of prolonged drug use, just days after being questioned by police, the SFPD was able to use his digital footprint and other evidence to close the case a year later. Sgt. Gary Watts believed Andrus had cut up the body in a bathtub and subsequently took it to the South of Market neighborhood. However, the motive could not be determined.[10]