Food is usually at the center of some of the happiest occasions and events. From weddings and birthday celebrations to Christmas holidays and parties, food is an incredibly important part of many people’s lives. But, no matter how wonderful food is, not many people would go so far as to commit murder or any other crime over it.

For most people, the idea of murdering someone over a condiment is insanity personified, but below, you’ll find 10 cases of arguments and confrontations over food that ended in disaster.

Related: 10 Worst Crimes To Occur In A McDonald’s

Employee shot, killed over ‘too much mayo’ at Atlanta Subway

On June 27, 2022, Melvin Williams walked into an Atlanta Subway restaurant in the evening to order a sandwich. Williams then began complaining that the sandwich he ordered had too much mayonnaise on it. Just after 6:30 pm, the police were called to the establishment because gunshots were fired. (Link 1)

The mayonnaise on the sandwich had angered him so much that a confrontation broke out, and he shot two of the restaurant employees. One of the workers survived, but sadly the other woman was pronounced dead later in the hospital.

Williams was arrested that night and charged with aggravated assault with a deadly weapon, murder, and the possession of a firearm during the commission of a felony.

Twenty-six-year-old Brittany Macon succumbed to her gunshot wounds. The other woman who was shot was 24 years old and was found in critical condition.[1]

Sources: Disgruntled customer eyed as person of interest in killing of Zhiwen Yan

One night in April 2022, Zhiwen Yan rode his scooter from a Queens restaurant where he worked as a delivery driver. But, little did he know that an enraged customer was watching him. The customer, Glenn Hirsch, had even carried out a campaign of terror and harassment for a month during the previous November against the restaurant employees.

He had demanded a refund because he said he didn’t receive enough duck sauce with his food order, but the restaurant refused to take the order back due to coronavirus fears. For weeks after this incident, Hirsch took out his anger on the restaurant workers, slashing the tire of one employee’s car and showing up to the establishment brandishing a gun.

On the evening of April 30, Hirsch drove to the restaurant and passed it seven times before seeing Yan leaving to carry out his deliveries. Hirsch followed Yan as he dropped off a food order, then continued following him before shooting the unsuspecting deliveryman.

Yan was rushed to Elmhurst Hospital Center but was soon pronounced dead. Hirsch was arrested and charged with criminal possession of a weapon and murder, but he was released on bail and placed in home confinement.

However, a short while after he was free on bail, Hirsch was found dead in his Queens apartment—he had committed suicide by shooting himself in the head. He had gunshot wounds to the head, and a note was left by him, maintaining his innocence.[2]

Couples who have been together for a long time tend to have arguments over silly things. But on May 23, 2021, at her home in Manchester, England, an argument over a bag of frozen french fries led to tragedy for Yvonne McCann, a 46-year-old mother of four.

Yvonne’s husband, 49-year-old Thomas McCann, strangled his wife to death after they argued about a bag of frozen fries that had been left out of the freezer. After strangling her, McCann proceeded to cut up her body and dump it in a nearby park.

He even replied to text messages from their children on his wife’s cell phone, pretending to be her, telling them she had been arguing with their dad and that she had walked out. But, parts of Yvonne’s body were found by some dog walkers in a county park. The police were called after two bags were found, and then four more in another section of the park.

McCann discovered that his wife had started a relationship with another man in 2013. This clearly made her husband jealous, and their relationship broke down and sadly ended in Yvonne’s murder. It seemed that the frozen fries argument was the trigger that sent McCann over the edge.

He was sentenced to life in prison with a minimum of 13 years and 4 months before parole. McCann will be jailed for no less than 12 years.[3]

In the town of Moorhead, Iowa, in December 2020, Kristofer Erlbacher was out drinking at a bar with his friend Cam Solberg and a third man identified as Shaun Johnson. But, when Erlbacher spread mayonnaise on Solberg’s food, this angered the latter, and a fight broke out.

After the fight ended, Erlbacher and Johnson drove to a cafe, Dave’s Old Home, that was around 10 minutes away from the bar. During this 10-minute journey, Erlbacher called Solberg’s half-brother, Craig Pryor, threatening to shoot Solberg.

Pryor drove to the cafe, where another argument between the men was brewing. Erlbacher then came outside and drove his truck into Pryor’s and struck Solberg, which injured him but wasn’t fatal. However, instead of just leaving, Erlbacher drove down the street, turned the truck around, and drove toward Solberg this time, hitting him fatally.

He then drove away, but his vehicle broke down shortly after. He called his father for help, who then drove Erlbacher back to the scene of the crime, where he was arrested. Erlbacher was convicted and sentenced to life in prison.[4]

6 And Cold Fries on the Side

Usually, if someone is served cold french fries, the most they would do is complain to the restaurant. But one night in August 2022, 20-year-old Michael Morgan took things too far when the french fries his mother ordered were served to her cold.

The incident happened at a McDonald’s restaurant in Bedford-Stuyvesant, Brooklyn, NY. Official reports say that Morgan’s mother was inside the restaurant and started to complain that her french fries were cold. An argument broke out between the mother and the victim, 23-year-old employee Matthew Web, which escalated, and the woman ended up calling her son, Michael Morgan.

Morgan arrived at the restaurant to confront the employee and ended up shooting the victim outside. Morgan was arrested and charged with criminal possession of a weapon and attempted murder. Sadly, Matthew died from his injuries a couple of days later.[5]

In a Subway restaurant in Rochester, Minnesota, a customer flew into a rage because of the size of her sandwich and decided to terrorize the employees of the establishment.

Venessa Z. Wright had a tantrum when she saw the size of the sandwich she ordered. This tantrum then led to a verbal argument that developed into violent threats and a physical confrontation. As she was complaining about her sandwich, Wright threatened to get her boyfriend to come to the restaurant and “shoot up” the place.

She then mocked the employee who served her, suggesting he would be killed over the sandwich. She also hit another employee with a gift card holder. The restaurant workers ordered her to leave and managed to push her out of the restaurant. However, later on, she forced her way in again, accompanied by her boyfriend.

Wright then continued terrorizing the employees, even punching the store owner in the face. She was charged with three misdemeanors, two assault charges, felony terroristic threats, and one burglary charge. Wright faces five years in prison and possibly a fine of $10,000 if she is found guilty of the felony charge.[6]

4 I’m Starting to Feel Sorry for the Condiments

Burger King employee arrested after shooting at customer who threw mayonnaise at her, police say

Although throwing food at someone would be considered unacceptable, not many people would respond by shooting that person. But that’s exactly what 30-year-old Shateasha Hicks did when someone threw mayonnaise at her. The attack happened in March 2022 at a Burger King restaurant on Northwest 167th Street in Miami.

Hicks, a Burger King employee, was seen having a verbal dispute with a customer in their car at the drive-thru. The person in the car then drove off into the parking lot. But Hicks decided to head to her car, grab a gun, and fire at the person’s car five times as they sped away out of the lot. Hicks then jumped into her car and drove away too.

Police found her car abandoned, but they managed to track her down using the registered address of the vehicle. They found a gun on the floor of the car, and the five bullet casings were retrieved from the parking lot where the incident happened.

Hicks faces a discharging a firearm charge. Unfortunately, the condition of the customer is unknown.[7]

It can be frustrating for parents when their children refuse to eat their meals. But evil Paul Marsh from Kent, England, inflicted cruel and disastrous injuries on his girlfriend’s three-year-old daughter, Jessica Dalgleish, who refused to eat her lunch one day.

Marsh was angry that Jessica wouldn’t eat her meal, and in response, he threw the little girl forcefully against a hard surface. She hit her head, but instead of seeking medical care, Marsh tried to cover up his attack, claiming that she had fallen down the stairs.

Sadly, Jessica passed away in the hospital on Christmas Eve in 2019. Marsh was convicted of manslaughter and child cruelty, being sentenced to a total of 11 years in prison.[8] 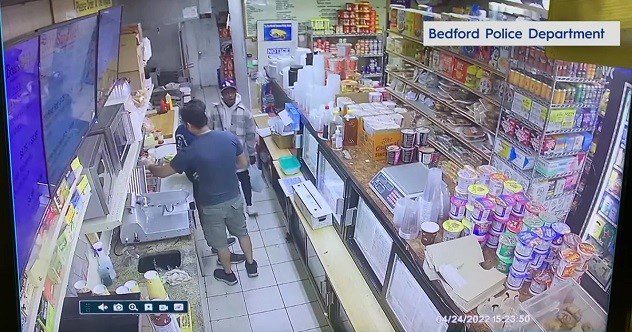 In 2021, a woman was not happy with how her sandwich was being prepared at a deli in Bedford, NY. So she decided to make her feelings known… violently. Twenty-six-year-old Lanette Howard walked behind the counter, picked up a knife, and began threatening the worker with it.

After the confrontation, Howard threw down the knife and walked out of the store. The following year, Howard was arrested and charged with menacing and criminal possession of a weapon. She was then released on her own recognizance.[9]

A barbecue at a Detroit home on Pierson Street ended in disaster when 29-year-old Deveius Weathers shot and killed 31-year-old Ronnie Charles Ray during a confrontation over barbeque chicken. The attack happened at around 9:30 pm one night in August 2022.

Investigators tracked Weathers down to a house on Heyden Street the following day. According to the prosecutor’s office in Wayne County, police attempted to seize Weathers as he was backing out of his driveway, but he fled the scene.

He then returned to Pierson Street, barricading himself in another house. He also had a two-year-old girl with him who had been kidnapped, believed to be his daughter. After a standoff that lasted five hours, Weathers came out of the house holding the little girl in front of him.

Weathers was charged with felony firearm possession, carrying a concealed weapon, third-degree fleeing and eluding, as well as first-degree murder. He was remanded to the Wayne County jail and was set to return to court on September 8, 2022, for a probable cause hearing.[10]