Nature’s oddities are entertainment gold. There are chimps using rituals with trees, creatures with strange features, and even unidentified animals. Beyond such curiosities, the darker side of nature has plenty to offer. From bloody and unexplained beach attacks to panda pregnancies that never complete, here are the top ten head-scratchers for today. 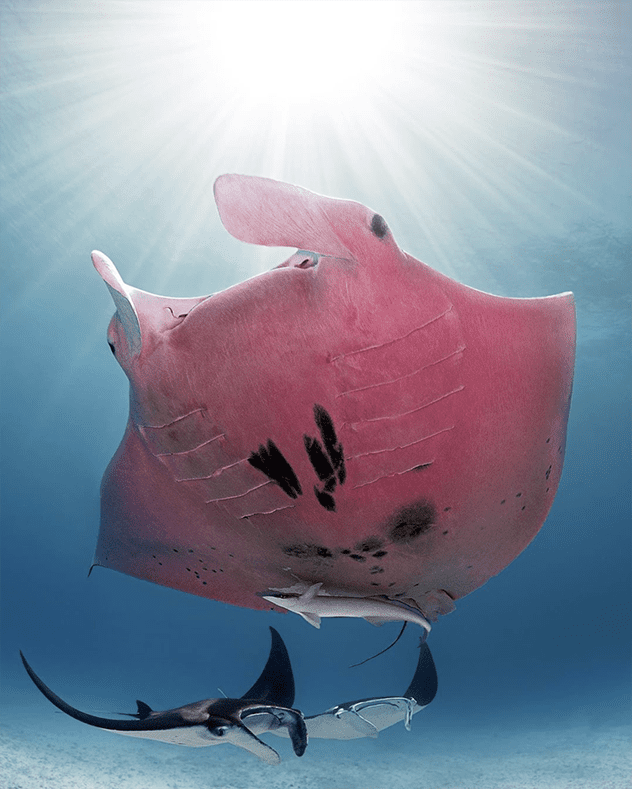 In 2020, Kristian Laine dove near the Great Barrier Reef and took photos of manta rays. When they came out pink in some of the photos, Laine thought his camera had malfunctioned. The truth surfaced after he put the snaps on social media.

The “faulty” shots showed the same individual. Biologists have known about this male since 2015 and he was indeed pink. They called him Inspector Clouseau after the quirky investigator from “The Pink Panther” movies.

Despite his bright hide, Clouseau has been seen fewer than 10 times. A skin sample put to bed the theories that the manta’s hue came from meals with red pigment or a skin infection. Tests showed that it was more likely a genetic mutation, possibly erythrism. This condition gives animals a boost of red pigment.

Clouseau measures 3.3 meters (11 feet) long. This is a survival feat on its own, considering that mantas are black and white to avoid predators and stalk prey.[1] 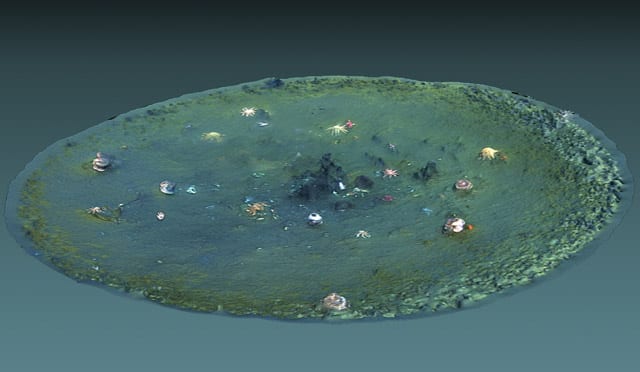 When a wind farm’s location was chosen offshore near California, a problem cropped up. Over 5,200 holes sat on the seafloor. Known to the maritime community for years (thank you, ship radar), the dents were large but not really the issue. Instead, there was a nervous suspicion that they were formed by underground gas.

In 2019, robots dove into the ocean to look for methane. The investigation found no gas. If methane was behind the so-called pockmarks, the last activity was around 50,000 years ago. The bots also saw something missed by every ship’s sonar thus far—an additional 15,000 holes.

The scoops were not baby pockmarks. Besides being a lot smaller and younger, they had also steeper sides and sandy tails that slewed in the same direction. One theory pointed to fish living inside objects sitting on the ocean floor. The critters kick up dust which is carried away by the currents. This sinks the item deeper and forms a hole. There were fish living inside trash in some of the newly-discovered holes but that did not explain why the majority were empty.[2] 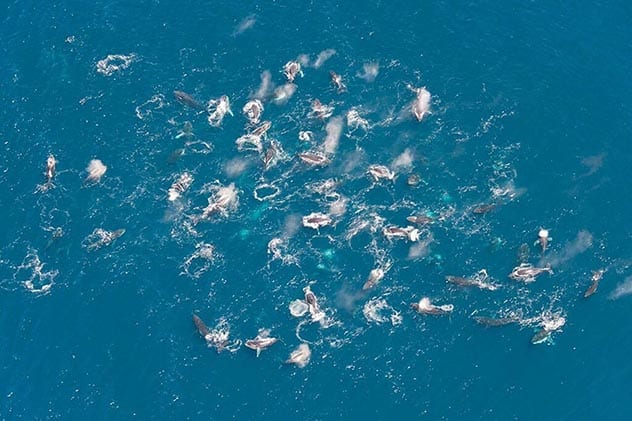 When a research vessel cruised the coast of South Africa, it encountered something never before witnessed with humpback whales. When these mammals gather, they rarely number more than four whales. In this instance, the water churned with 200 whales in an area the size of a football field.

The timing was also wrong. Humpbacks visit South Africa in the winter to hunt plankton and shrimp. But this party arrived in the spring. It was not a one-time deal, either. The first gathering happened in 2011, then 2014, and 2015.

The animals were feasting, which suggested a bloom of prey had attracted them. Their migration patterns might be changing or this is normal behavior. If the latter is true, the gatherings probably vanished after hunters killed off 90 percent of the species (their population is now stable). It is hard to say which theory explains the tightly-packed clusters.[3] 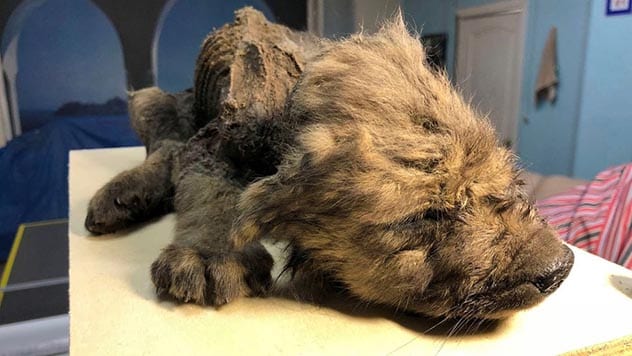 Around 18,000 years ago, a puppy perished in Siberia. The body ended up in permafrost and rested undisturbed until 2018 when it was found close to the Indigirka River in Russia. The icy grave kept the pup in pristine condition. The mummy still had eyelashes, fur, whiskers, nails, and paw pads. The jaws were also lined with milk teeth, suggesting that the puppy never saw its eighth week of life.

The resemblance to a wolf was obvious. However, wolves and dogs went their separate ways around 40,000 years ago. This meant that the puppy could also be a dog or a transitional canine between the two species. The mystery is a sticky wicket. The usual techniques, including genetic tests, could only determine that the pup was male. There was nothing definite about which side of the fence this boy belongs.[4] 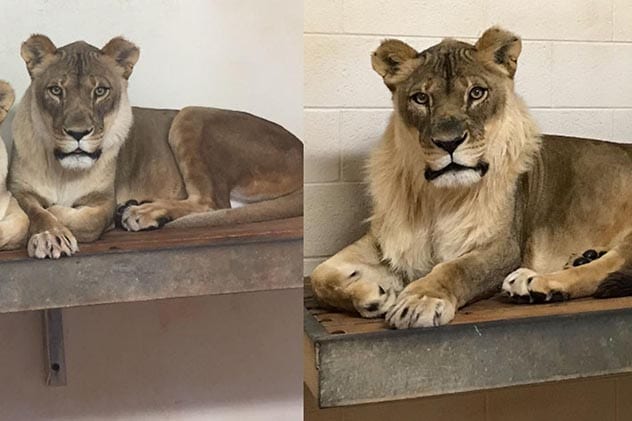 The Oklahoma City Zoo had a bearded lady. Called Bridget, the 18-year-old lioness suddenly grew a mane-like frill. The hair blossomed under her chin rather than a full hairdo like a male’s. The captive-born Bridget looked normal for most of her life. Her sister Tia, who was born in the same litter, also remained hairless while Brigette sprouted the beard from March to November in 2017.

A hairy female in South Africa offered a clue. She had a deformity in her ovaries which released the male hormone testosterone. That possibility was ruled out after blood tests showed the sisters had the same testosterone levels. However, Bridget had more adrenal hormones and androstenedione. The latter encourages masculine features. The discovery led experts to theorize that one of her adrenal glands probably had a harmless tumor that produced the androstenedione.[5] 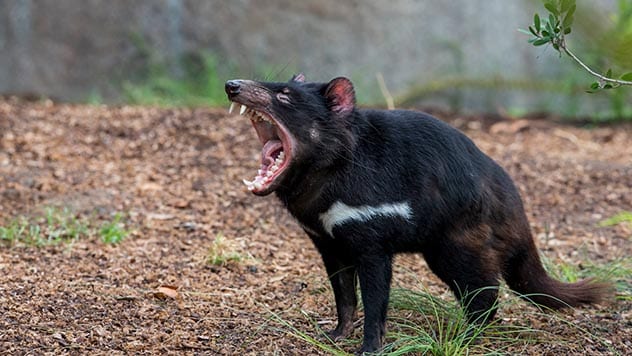 Tasmanian devils are marsupials on the edge. One disease has wiped out 85 percent of the species. Called Devil Facial Tumour Disease (DFTD), the contagious cancer jumps between devils when they fight. The rapid infections hurtled the animals towards extinction.

Enter the West Pencil Pine devils. This group lives in north-western Tasmania and kept their population growth stable. Fewer individuals get infected with DFTD and those with tumors live longer than they should. Whatever makes them different is the key to saving the species.

The discovery that they are genetically diverse brought hope. Genes is a huge problem with devils. Their diversity is so low that they all share the same Histocompatibility Complex (MHC) genes as the tumors. This might be why their immune system cannot recognize the cancer as a disease. Logically, devils stand a better chance if some have genes not too similar to the disease. Like the Pencil patch.

Tests brought bad news. Yes, their genes are less tumor-like. No, that did not lower their chances of contracting DFTD. As discouraging as that was, it also deepened the mystery of why they fare better than the rest.[6] 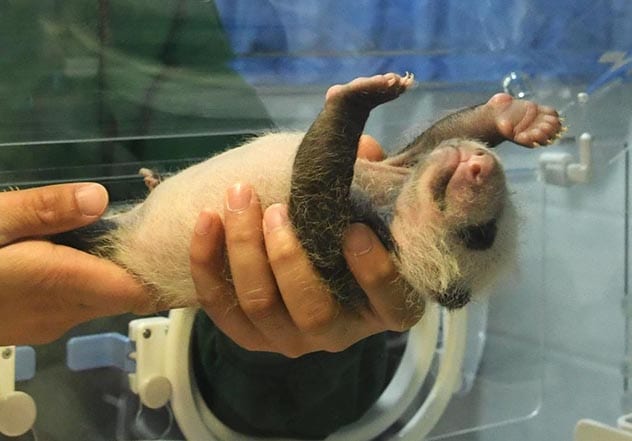 At birth, a Giant Panda cub is 900 times smaller than the mother. Researchers wanted to know why but things weren’t as easy as placing a baby panda on a scale. In captivity, newborns are scarce and well-protected by the mothers.

The leading theory suggested the cubs were tiny because of an evolutionary leftover. Like all bear species, pandas shortened their pregnancies to avoid gestation during hibernation. But while modern-day pandas no longer hibernate, it explains why they are pregnant for only four weeks. Perhaps this was just enough time for small-sized cubs to develop fully.

The chance to study newborn pandas finally came when a litter was born in Washington, D.C., but died the same day. They were scanned and compared with other newborn bear species and animals. The rest had the robust skeletons one would expect of completed pregnancy. But the bones of the pandas, born at the usual four weeks, were so underdeveloped that they were comparable to a 7-month-old human fetus. This shot the theory to pieces. Panda pregnancies are not short, full-term events. For unknown reasons, they are more like ovens that chime before the bread is done.[7] 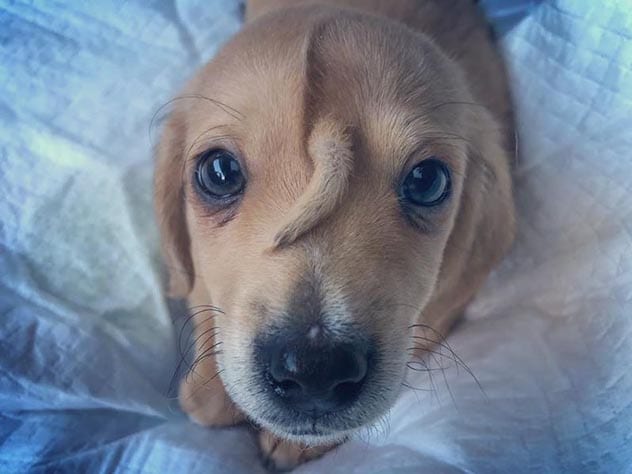 In 2019, the shelter Mac’s Mission took in a stray. The puppy was around 10 weeks old and needed treatment for frostbitten toes and worms. However, the staff and vet probably had eyes only for the tail that grew out of his forehead.

This called for a special name so they named the dachshund mix “Narwhal” after the single-tusked whales. But after he became a viral sensation, the media dubbed him the “unicorn puppy.”

Cuteness aside, Narwhal underwent tests to determine if the appendage might cause trouble. In that case, it had to go. X-rays found no bones inside and that the whole thing was basically just skin. When the shelter learned that the head-tail would not bother Narwhal, they decided not to amputate.

The birth defect was unique but also mysterious. It’s unclear why the puppy sprouted a tail on each end. One explanation is that Narwhal absorbed his own identical twin. In humans, they are known as parasitic twins and appear as extra limbs or organs attached to the surviving sibling. This is unheard of in dogs since they rarely give birth to identical twins.[8] 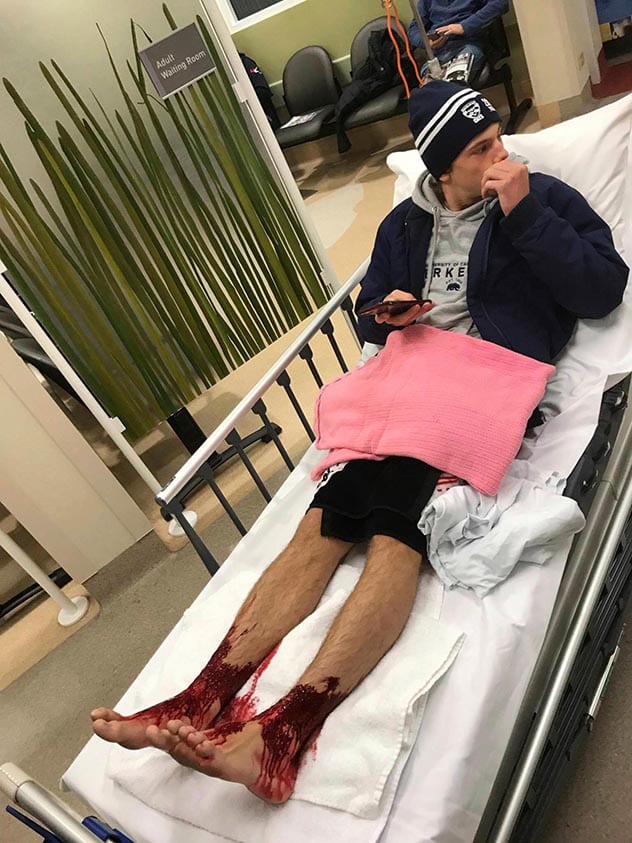 In 2017, a shocking attack happened on a beach in Australia. Sam Kanizay was rushed to hospital after the 16-year-old left the water a bloody mess. He told doctors that he stood in the sea but no pain alerted him that he was bleeding profusely around the ankles.

Sea lice were the main suspect. The tiny crustaceans are parasites and large numbers can severely injure fish. But they only give people a slight rash. Sam’s father found something else. Using meat and a net, he trawled the spot where his son was injured and captured sea fleas. Unlike sea lice, they are not crustaceans and several species only eat plants. Even those that adore blood are not parasitic.

Experts cannot agree which one is the culprit, what attracted them, or why the victim bled so badly. But a similar incident happened two years earlier at the same beach. A father and son left the water, only to realize they were bleeding. They noticed tadpole-like things. Since some species look that way, it suggested the parasitic sea lice were behind both attacks.[9]

Why do chimpanzees throw stones at trees?

A weird scene is going down in West Africa. Chimpanzees amble up to a tree, yell loudly, and then hurl a rock. Sometimes two. Then they walk away. Nobody knows why they do this except that it’s probably not for laughs. Chimps like spontaneous games and the rock-throwing has a distinct ritual feel to it. Only certain species of trees are pelted and among these, individual trees are so heavily stoned that rocks pile up around the base.

Researchers wondered if the wood’s qualities made the chimps happy. Perhaps it created the right sounds for bush telegrams? A kind of musical instrument? There was only one way to find out. A team headed into the forest, found pockmarked trees, and switched on the recorder. Then they went ape and threw rocks.

Software combed through the whacks and found that the communication theory was on to something. To travel a good distance, sounds must be low and constant. Sure enough, the trees hummed deeply. The frequencies were amplified by the large base and drawn out by the timber.

But a single throw (or two) is hardly a message worth sending. The chimps’ deep hooting beforehand also does the same thing first. So why send a pebble note at all? A good question but for now, the two-step ritual remains a mystery.[10]