There are many incidents in the history of various religions that are a cause of embarrassment for that religion. Some are not considered embarassing to adherents of the faith – but are considered so by many people outside of the religion. Both types are included here. In no particularly order: 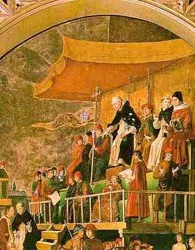 Everyone has different beliefs. Now you can try to understand all of them with World Religions: The Great Faiths Explored & Explained at Amazon.com!

2. On the Jews and their Lies [Lutheranism] 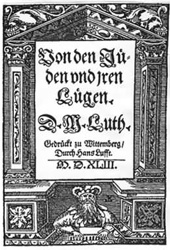 Unfortunately the founder of protestantism Martin Luther was also a religous bigot. In his most famous book about Judiasm (written in 1543) we find the following gem:

“base, whoring people, that is, no people of God, and their boast of lineage, circumcision, and law must be accounted as filth. They are full of the devil’s feces … which they wallow in like swine, and the synagogue is an incorrigible whore and an evil slut …

If you want to read the entire booklet, it is available here. Two other books by Luther, Against the Papacy at Rome Founded by the Devil, and Against Hanswurst, are described as “rivaling his anti-Jewish treatises for vulgarity and violence of expression”, and “[are] so inexpressibly vile that a common impulse of decency demanded their summary suppression by his friends.”

3. The Book of Abraham [Mormonism] 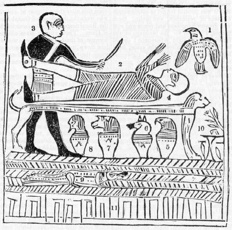 The Book of Abraham is believed by Mormons to be the handwritten account of the prophet Abraham. In 1835 Smith was able to use his “Angel-given” tools to translate some Egyptian scrolls that he was given access to (at that time no one could read hieroglyphics). Upon inspection, Smith declared that they contained the Book of Abraham. He promptly translated the lot and it was accepted as scripture by the church (it is included as part of the Pearl of Great Price). The scrolls vanished and everyone thought the story would end there. But it didn’t – in 1966 the original scrolls were found in the New York Metropolitan Museum of Art. The scrolls turned out to be a standard Egyptian text that was often buried with the dead. This fraud caused a number of mormons to leave the church and is still a hotly debated topic amongst mormons and their critics.

4. The End of the World [Jehovah’s Witnesses] 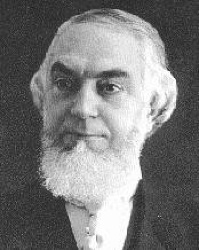 1914 was one of the more important estimates of the start of the war of Armageddon by the Jehovah’s Witnesses (Watchtower Bible and Tract Society). They computed 1914 from prophecy in the book of Daniel, Chapter 4. The writings referred to “seven times”. The WTS interpreted each “time” as equal to 360 days, giving a total of 2520 days. This was further interpreted as representing 2520 years, measured from the starting date of 607 BCE. This gave 1914 as the target date. When 1914 passed, they changed their prediction; 1914 became the year that Jesus invisibly began his rule.

Since late in the 19th century, they had taught that the “battle of the Great Day of God Almighty” (Armageddon) would happen in 1914 CE. It didn’t. The next major estimate was 1925. Watchtower magazine predicted: “The year 1925 is a date definitely and clearly marked in the Scriptures, even more clearly than that of 1914; but it would be presumptuous on the part of any faithful follower of the Lord to assume just what the Lord is going to do during that year.”

The Watchtower Society selected 1975 as its next main prediction. This was based on the estimate “according to reliable Bible chronology Adam was created in the year 4026 BCE, likely in the autumn of the year, at the end of the sixth day of creation.” They believed that the year 1975 a promising date for the end of the world, as it was the 6,000th anniversary of Adam’s creation. Exactly 1,000 years was to pass for each day of the creation week. This prophecy also failed.

Realizing how stupid they were looking every time they made a new failed prediction, they announced that the end of the world would occur 6000 years after the creation of Eve – a date that can not be calculated. 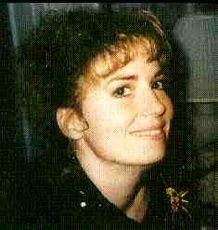 A civil suit brought by her family against the Church was settled on May 28, 2004.

Want to know more about Scientology? Get the book Inside Scientology: The Story of America’s Most Secretive Religion at Amazon.com! 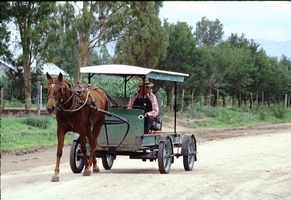 You may be wondering why there is a photograph of a Mennonite buggy in this item – the reason is that the founder of the Baptist Church, John Smyth, eventually broke away from the church he founded and joined the Mennonites! That’s right – Smyth had so little faith in his own creation that he abandoned it. In addition, he tried to convince as many of his congregation as possible to abandon the baptist church – and a majority of them did. 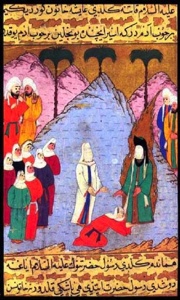 Aisha was the six year old girl that was betrothed to Muhammad. At the age of nine she married him – becoming one of his 11 (or 13 depending on the source) wives. While most Muslims do not object to this marriage, it is a source of great scandal to many non-Islamic people. In Islamic tradition, she is attributed as the source of many stories about the life of Muhammad. It is believed that she was his favorite wife. 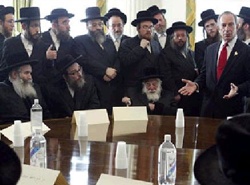 Metzitzah b’peh is a controversial method of circumcision performed by some Haredi and Hassidic Jews in which, after removing the foreskin, the mohel (circumciser) sucks out the blood from the wound to clean it. The mohel spits the blood into a receptacle provided. Afterwards the circumcised penis is bandaged, and the act is considered complete. Metzitzah b’peh was implicated in the transfer of herpes from mohels to eight Israeli infants, one of whom suffered brain damage. When three New York City infants contracted herpes after metzizah b’peh by one mohel and one of them died, New York authorities took out a restraining order against the mohel. In three studies done in Israel, Canada, and the USA, oral suction following circumcision has been implicated in 11 cases of neonatal herpes. 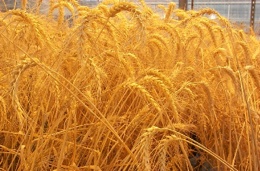 After a variety of newspaper reports claiming that a man had discovered a variety of wheat that was far more productive than normal wheat, the Jehovah’s Witnesses believed it to be a sign of a covenant from God relating to the end times. As a result, they bought up a lot of the wheat and offered it for sale at exorbitant prices. The official statement from the organization was:

Brother Bohnet writes us that he has gradually accumulated a crop of miracle wheat from the few grains he obtained as a start. He prefers that the first opportunity for obtaining this wheat shall go to THE WATCH TOWER readers. He will sell it for $1 per pound, including postage, and give the entire proceeds to our Society. All orders for this wheat should be addressed, Miracle Wheat Bohnet, 17 Hicks street, Brooklyn, N. Y. This will keep mail on this subject separate from his personal mail and from ours.

At trial, Mr. Russell admitted the seed packets had been mailed from the Watch Tower offices: “For the accommodation of our readers, we allowed this seed-wheat to be put up in pound packages and mailed from THE WATCH TOWER Office, just as the U.S. Government handles such seeds at Washington.” (ZWT 02/15/1913).

Needless to say, the wheat was not miraculous and behaved exactly like normal wheat. 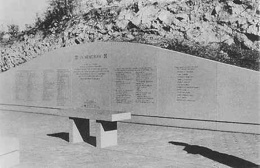 The Mountain Meadows massacre was a mass killing of the Fancher-Baker wagon train at Mountain Meadows in Utah Territory on September 11, 1857, by a group of Mormons and Paiute Indians. The Arkansas emigrants were traveling to California shortly before Utah War started. Mormons throughout the Utah Territory had been mustered to fight the invading United States Army, which they believed was intended to destroy them as a people. Initially intending to orchestrate an Indian massacre,[citation needed] two men with leadership roles in local military, church and government organizations, Isaac C. Haight and John D. Lee, conspired for Lee to lead militiamen disguised as Native Americans along with a contingent of Paiute tribesmen in an attack.