One of history’s greatest myths spawning controversy regarding its apparent possible existence is dragons. Every civilization has had record of some form or another of the dragon be it on totem poles, cave drawings, or literature, so, one could conceivably assume that some kind of dragon-like creature may have roamed the earth. Yes, we all know dinosaurs existed, but none really looked like the fabled dragon of lore. They differ in basic body structure, however, the world over from the standard reptilian pose of the towering beast fought against by mighty knights, to the Oriental serpentine type. Dragons, in every form, remain a popular beast of imagination and legend and continue to fascinate. Here are ten of the most popular from film, literature, and history. 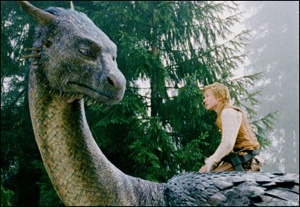 Created and written by Christopher Paolini, Eragon is a poor farm boy who stumbles upon a most unusual stone which eventually turns out to surround a dragon, Sephira. The two try to outwit the forces of evil while attempting to become friends and learn the ways of the famed Dragon Riders along the way. It spawned a feature film released last year, a second book in the trilogy called Eldest, and the release date of the third book stands as September 23, 2008. And, as of October 30th, the trilogy will be expanded to four books. 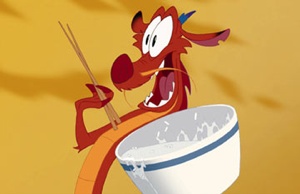 Hanging around with a woman who’d just as soon be a man so she could do battle in war, Mushu (voiced by Eddie Murphy) the Oriental dragon keeps the abstinent Mulan company in the Disney feature film. She eventually falls for the prince and everyone is happy.

8. St. George and the Dragon 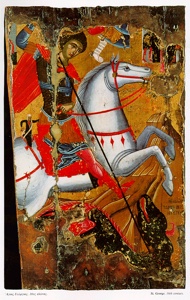 In Christian hagiography, St. George, (275-303 AD) did victorious battle with a huge dragon saving countless cities and becoming a reluctant hero in now modern-day Turkey and becoming a venerated Christian martyr. In 1941, a feature film by Disney was adapted from Kenneth Grahame’s novel The Reluctant Dragon about St. George (or Sir Giles) jousting a much older dragon named ‘The Timid Dragon’. St George is, of course, the Patron Saint of England. 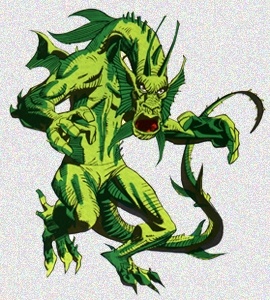 In the Marvel universe, the gigantic, alien, serpent-like dragon (or, occasionally, more four-legged dragon-like), Fin Fang Foom has done battle with any number of super hero groups like the Fantastic Four and Iron Man. He hibernates with the aid of magic and a special herb, but when he attacks, he wreaks some serious havoc. 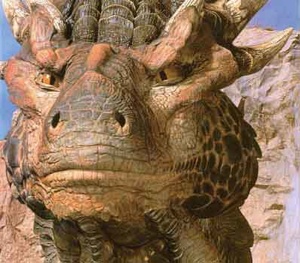 The film released in 1996 gave us perhaps one of the finest digitally-created dragons ever and perhaps the most authentic as well. Voiced by Sean Connery, Draco finds himself the last living dragon who has become the target of a village’s wrath and therefore the knight, Bowen (Dennis Quaid) by proxy. The two decide on trickery and Draco moves on into legend. 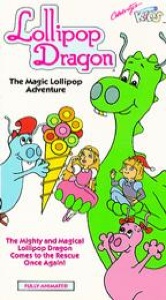 Gary Wilmot voices this classic children’s treasure seen the world over in classrooms and on kid’s television since 1986. The dragon and his friends must always, in many incarnations of the program, face off against the evil Baron Bad Blood. He always saves the day!

Tolkein has had a hand in creating such lasting literary characters as Hobbits, the evil Sauroman, and Uru’kai, as well as the ancient dragon called Smaug. Existing in the novel The Hobbit, Smaug is the denizen of Lonely Mountain and the guard of all the treasure within. Once Bilbo Baggins discovers an open spot among Smaug’s gem-encrusted belly scales, the Dwarves take back what is rightfully theirs. 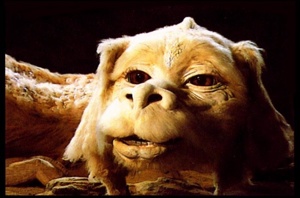 Leave it to a curious youngster named Bastion to find a tome about a Neverending Story and the dying land of Fantasia in which the hero, Atreyu, must confront a series of obstacles on his way to do battle with the evil Nothing. Along the way he finds a Luck Dragon (or rather, it finds him) called Falcor and the two become best friends. 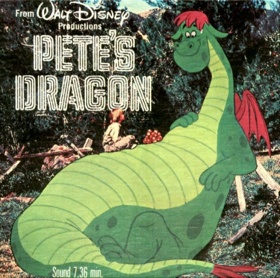 Who wouldn’t love a sometimes-invisible dragon as a best friend? Well, Pete certainly does, but the bigger issue is that Elliot doesn’t know when to behave and his own child-like innocence causes trouble for the town of Passamaquatee. Having the ability to blow fire proves useful at the end when Elliot redeems himself by igniting the torch in a most important light house. 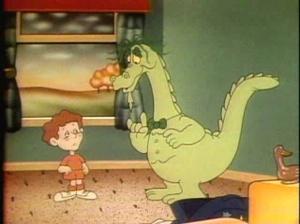 Though started initially as a song by Peter, Paul, and Mary, Puff has gone on to cause quite a stir of myths including the idea that ‘puffing the magic dragon’ had something to do with smoking a joint. Denied by every member of the band, the idea behind the song was just meant to be mystical and silly, and each claim never to have done any illicit drug. Eventually, the song would go on to spawn a movie in 1978, voiced by Burgess Meredith.