[WARNING: This list contains language and images that may be offensive to some readers] This list will be especially useful for a date (not the first though – you shouldn’t go to the movies on your first date!) This is a list of movies that are aimed at the female market but still have elements of appeal for men. Next time you need to impress your girlfriend, pick one of these! Thanks to Catriona for the suggestion!

Why will guys like it? The video clip above says so much more than I could!

Deuce Bigalow is a fish tank cleaner until he gets a temporary job watching over a gigolo’s house. But when Deuce accidentally wrecks the house, he is forced to compensate by becoming a gigolo himself! He takes on interesting clients (a tall Norwegian woman, a rotund eater in drag, a roommate who curses every five seconds, a nurse)…and together with a detective chasing Deuce down… 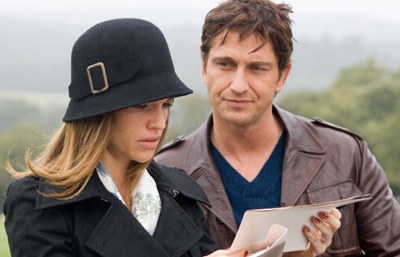 Why will guys like it? Gerard Butler (of 300 fame) playing a goofball! While it is a romantic comedy, it avoids all the cliches and gives a fresh approach to the genre.

Holly Kennedy is beautiful, smart and married to the love of her life – a passionate, funny, and impetuous Irishman named Gerry. So when Gerry’s life is taken by an illness, it takes the life out of Holly. The only one who can help her is the person who is no longer there. Nobody knows Holly better than Gerry. So it’s a good thing he planned ahead. Before he died, Gerry wrote Holly a series of letters that will guide her, not only through her grief, but in rediscovering herself.

Why will guys like it? Guys will love this for one scene in particular (though the “lip my stockings scene” is also classic). The scene I am talking about involves a “titty” bar and brilliant music by Peaches.

Bob Harris is an American film actor, far past his prime. He visits Tokyo to appear in commercials, and he meets Charlotte, the young wife of a visiting photographer. Bored and weary, Bob and Charlotte make ideal if improbable traveling companions. Charlotte is looking for “her place in life,” and Bob is tolerating a mediocre stateside marriage. Both separately and together, they live the experience of the American in Tokyo.

[WARNING: Spoilers in the video clip]

Why will guys like it? A 1966 Thunderbird convertible and sex scenes! Of course it also includes a car chase and a road trip which is always a plus.

Whilst on a short weekend getaway, Louise shoots a man who had tried to rape Thelma. Due to the incriminating circumstances, they make a run for it but are soon followed closely by the authorities including a local policeman who is sympathetic to their plight. The federal authorities, however, have less compassion and thus a cross country chase ensues for the two fugitives.

Bored Roberta spots a regular personal ad in the paper titled ‘Desperately Seeking Susan’. She heads off to New York, following one of the ads, and finds Susan. When Susan sells her jacket, Roberta – trying to emulate her mystery ad writer – buys the jacket and wears it. Little does she know someone is looking for the jacket – and its owner…

Why will guys like it? Easy: Drew Barrymore, Cameron Diaz, Lucy Liu. As simple as that!

Based on the popular 70’s TV show, three cute chicks work for the mysterious “Charlie”. They are the female ‘James Bonds” of our time. They get to blow stuff up, kick the crap out of people, and wear really tight clothing, all whilst trying to retrieve stolen software and balance in high heels. 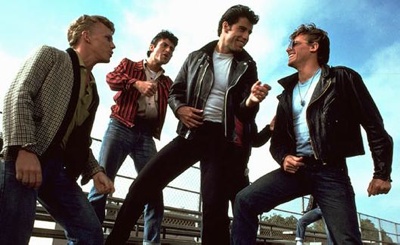 Why will guys like it? The T Birds gang, machismo, and the cars!

When wholesome good girl Sandy and greaser renegade Danny fall in love over the summer, they never expect to see each other again. But when they both discover that they’re now attending the same high school, social differences challenge their romance. 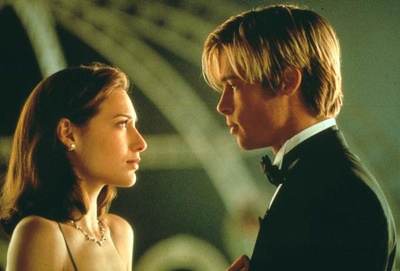 Why will guys like it? I have to be careful not to give too much away here, but it involves a rather brutal death scene early on in the film and great acting all round by Anthony Hopkins.

Bill Parrish, media tycoon, loving father and still a human being, is about to celebrate his 65th birthday. One morning, he is contacted by the Inevitable – by hallucination, as he thinks. Later, Death itself enters his home and his life, personified in a man’s body: Joe Black has arrived. His intention was to take Bill with him, but accidentally, Joe’s former host and Bill’s beautiful daughter Susan have already met.

Why will guys like it? Isn’t it obvious? It was written by Quentin Tarantino. Need another reason? Here is the synopsis: “Clarence marries hooker Alabama, steals cocaine from her pimp, and tries to sell it in Hollywood, while the owners of the coke try to reclaim it.”

Why will guys like it? There are just so many scenes that will have a guy in stitches on the floor – this is a unique chick flick in that it somehow manages to be more of a guy movie than a chick movie! This totally deserves its place in position 1.