Christmas is here! Merry Christmas to one and all – may you have a happy and joyous Christmas day. This year I thought it would be nice to see what we are all eating on Christmas day – so I am going to start the ball rolling by telling you what people in various nations will be eating, and you can then use the comments to tell us what you will be eating. This will be a nice way for us to all get to know the nicer details of Christmas as enjoyed by Listversers! The source for this list is Wikipedia, but there are many sites around on the net containing details of international dishes, so be sure to have a look around – they can be quite fascinating. 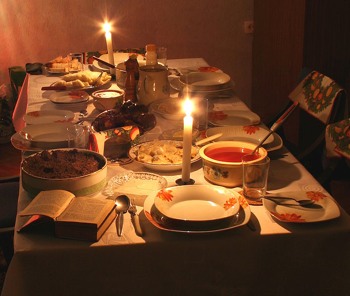 In the areas of the former Polish-Lithuanian Commonwealth (e.g., Poland, Ukraine, Lithuania), an elaborate and ritualised meal of twelve meatless dishes is served on the Eve of Christmas (24th December). This is because the pre-Christmas season is a time of fasting, which is broken on Christmas Day. As is typical of Slavic cultures, great pains are taken to honour the spirits of deceased relatives, including setting a place and dishing out food for them.

A traditional Christmas meal in the Czech Republic is fried carp and potato salad. This tradition started after excessive increase of fishpond cultivation in the Baroque era. Many households also prepare a great variety of special Christmas biscuits to offer to Christmas visitors. These preparations take place many days and weeks prior to the feast and take a long time to decorate with the remainder usually ending up on a Christmas tree as a decoration. 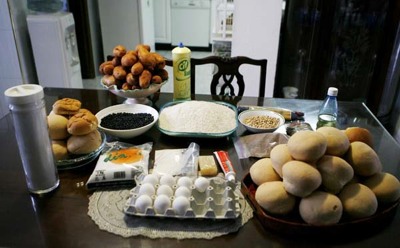 On Christmas Eve (Noche Buena), the extended family join together for a succulent dinner around the turkey, stuffed with ground beef and peanuts and decorated with fresh slices of pineapple and cherries; roast potatoes and apple sauce. The desserts include marzipan and assorted bowls with raisins, almonds and the panettone, accompanied by a cup of thick hot chocolate. At midnight, a toast is made, and good wishes and hugs are exchanged. A designated person runs to put Child Jesus in the Nativity scene. Then, the family members take their seat in the dinning room while singing Christmas Carols. 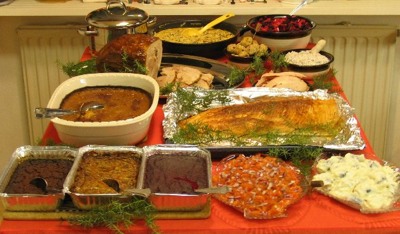 Joulupöytä (translated “Christmas table”) is the name of the traditional food board served at Christmas in Finland, similar to the Swedish smörgåsbord. It contains many different dishes, most of them typical for the season. The main dish is usually a large Christmas ham, which is eaten with mustard or bread along with the other dishes. Fish is also served (often lutefisk and gravlax), and with the ham there are also laatikot, casseroles with liver and raisins, as well as potatoes, rice, and carrots. The traditional Christmas beverage is either alcoholic or non-alcoholic mulled wine (glögi in Finnish). 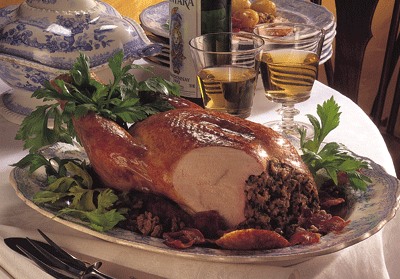 In English Canada, Christmas dinner is similar to that of its colonial ancestor, England, as well as to its neighbour the United States. Traditional Christmas dinner features turkey with stuffing (dressing), mashed potatoes, gravy, cranberry sauce, vegetables and plum pudding for dessert. Eggnog, a milk-based punch that is often infused with alcohol, is also very popular around the holiday season. Other Christmas items include butter tarts and shortbread, which are traditionally baked before the holidays and served to visiting friends, at various Christmas and New Year parties, as well as on Christmas day.

Other ethnic communities may continue to use old world traditions as well. For example, a Ukrainian Canadian family may eat a traditional Christmas meal of 12 meatless dishes, or may simply add perogies to a westernized meal. In French Canada, traditions may be more like those of France. 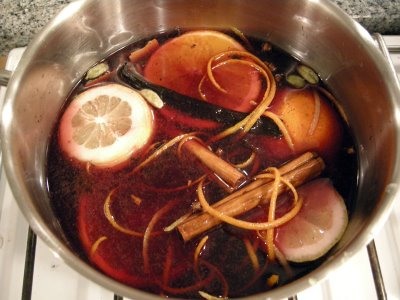 In Denmark the traditional Christmas meal served on December 24th consists of either roasted pork, goose or duck. This is served along with potatoes, red cabbage and plenty of gravy. It is followed with a dessert of rice pudding, often with an almond hidden inside, the lucky finder of which is entitled to a present referred to as the almond gift. Traditional Christmas drinks are Gløgg (pictured above) and traditional Christmas beers, specially brewed for the season. These usually have a high alcohol percentage. 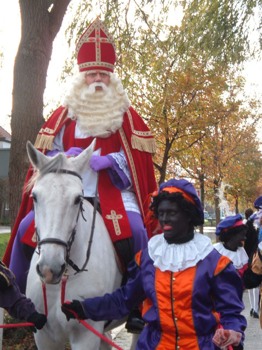 Christmas dinner in The Netherlands is a bit different from customs in neighbouring countries. One typical Dutch tradition is that of ‘gourmet’. This is an evening long event where small groups of people sit together around a gourmet-set and use their own little frying pan to cook and season their own food in very small portions. The host has prepared finely chopped vegetables and different types of meats, fish and prawns/shrimps. Everything is accompanied by different salads, fruits and sauces. The origin of gourmet lies most likely in the former Dutch colony Indonesia.

The Dutch also enjoy more traditional Christmas-dinners, like roast beef, duck, rabbit, pheasant or roasted or glazed ham. This generally served with different types of vegetables, potatoes and salads. In recent years, traditions from Anglo-Saxon countries have become increasingly popular, most notably the UK-style turkey. Pictured above is the Dutch version of Santa Claus. 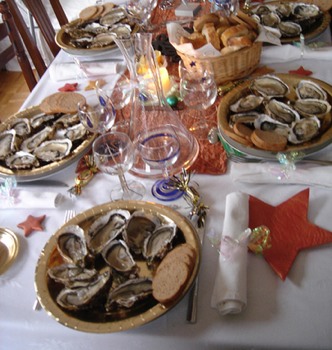 In France and some other French-speaking countries, a réveillon is a long dinner, and possibly party, held on the evenings preceding Christmas Day and New Year’s Day. The name of this dinner is based on the word réveil (meaning “waking”), because participation involves staying awake until midnight and beyond. Common dishes include goose or duck liver (foie gras); oysters; smoked salmon; lobster; roasted duck, goose or turkey with chestnuts and stuffing; and, for dessert, a traditional christmas cake called “La Buche de Noel” (Christmas log), a cream cake that comes in different flavours (chocolate, hazelnut…) and which has the shape of a log. The beverage served is traditionally Champagne. In Provence, the tradition of the 13 desserts is followed: 13 desserts are served, almost invariably including: pompe à l’huile (a flavoured bread), dates, etc. 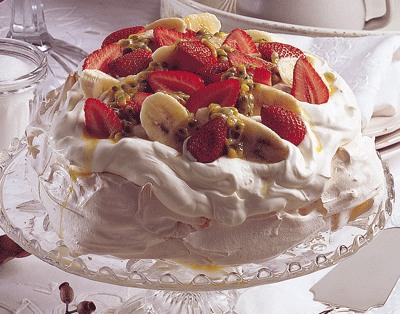 The Christmas customs of New Zealand are largely identical to the United Kingdom due to its status as a former British colony, the ethnic Caucasian population being almost exclusively British or Irish in descent, and the still pervasive British cultural influence on the country courtesy of constant movements of people between New Zealand and the UK. Christmas dinner consists of roast turkey, roast vegetables, stuffing (or dressing, as it is known in North America), cranberry sauce. Alternatively, roast ham may be offered as a main course and lamb is also very popular.

One important exception from British dinner is the absence of goose, as it is not raised in New Zealand and the government prohibits importing foreign meat products. Desserts are almost without exception mince pies or Christmas pudding (or plum pudding) and brandy butter, inherited from British practices. Enjoyment of non-British Christmas foods, such as stollen from Germany, Bûche de Noël from France, and panettone from Italy, was virtually unheard of in New Zealand until the late 1990s and is still extremely rare today. Due to New Zealanders celebrating Christmas in the summer, it is also common to barbecue, and eat seasonal fruit such as cherries and strawberries. Pictured above is a Pavlova – a typical New Zealand meringue based pudding often served at Christmas (and throughout the year). 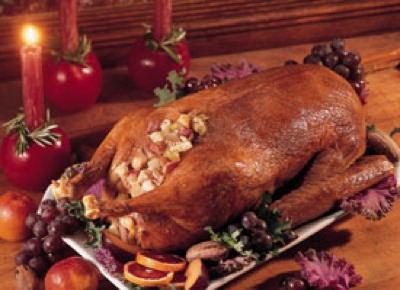 Christmas dinner in the United Kingdom (and Commonwealth nations) is usually eaten in the afternoon. Dinner in the United Kingdom and in Ireland usually consists of roast turkey or roast goose (although duck is common alternatives depending on the number of diners), sometimes with ham or, to a lesser extent, pork; roast potatoes; vegetables (usually boiled or steamed), particularly brussels sprouts; stuffing; chipolatas or pigs in blankets; cranberry sauce; with dessert of Christmas pudding (or plum pudding) and brandy butter.

A common tradition in the United Kingdom is to use the turkey’s wishbone to make a wish. Two people pull opposite ends of the wishbone until it breaks, with the person holding the larger fragment of the bone making a wish. The dessert of a British Christmas Dinner is almost always Christmas Pudding. Mince pies, a Christmas Cake or a Yule Log may also be eaten. 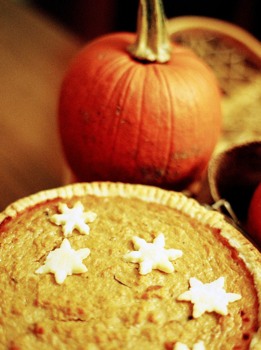 Many Christmas customs in the United States have been adopted from those in the United Kingdom, although customs from other European countries are also found. Accordingly, the mainstays of the English table are also found in the United States: cranberry sauce, turkey, stuffing or dressing, corn, squash, and green beans are common. Dessert often reflects the ethnic background of the participants, but examples include pumpkin pie (pictured above), marzipan, pfeffernusse, sugar cookies, panettone, fruitcake, apple pie, carrot cake, oreo pie, and mince pie. Ham or roast beef is often served instead of turkey, particularly since turkey is the mainstay at dinner for the American holiday of Thanksgiving in November.

Regional meals vary: Hawaii has Turkey teriyaki, Virginia has oysters and ham pie, and the Upper Midwest includes dishes from the predominately Scandinavian backgrounds such as lutefisk and mashed rutabaga or turnip. In the Southwest, especially New Mexico, a traditional Christmas dinner might include posole, tamales, empanaditas (mincemeat turnovers) and biscochitos.

This article is licensed under the GFDL because it contains verbatim quotes from the Wikipedia article Christmas Dinner.