Japanese fashion usually brings to mind kimono, yukata, or the sailor school uniforms. And for many people around the world who are interested in fashion, the lesser known styles and subcultures of Japan are becoming more widely recognized. The fashions on this list were worn at different times in Japan during the twentieth century and today. With some groups of Japanese teenagers these styles were extremely popular. They were viewed as creative and influential to fashion by some, and looked on with confusion and amusement by others. 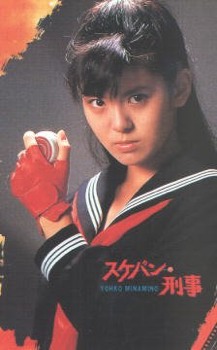 Suke means female, and Ban means boss. Sukeban were known for forming all girl gangs, and then committing acts of violence and shoplifting. Sukeban gangs first began to appear in the 60s. They were inspired by the gangs of boys known as Bancho, who hoped to one day join the yakuza. There was quite a range in size for the Sukeban groups, but the largest was known as the Kanto Women Delinquent Alliance, which included 20,000 girls. Rival groups would often get into fights. The Sukeban girls followed strict rules within their own groups, and breaking them would result in lynching. Getting burned with a cigarette was considered only a mild punishment. Sukeban were always seen in their sailor uniforms. They would wear pleated skirts that went down to their feet, and would custom embroider their uniforms.

The Takenokozoku were some of the first to form Harajuku into one of the best known places to view Japanese street fashion. The style was popular in the late 70’s and early 80s, and consisted of neon colored accessories such as beads, whistles, bows, and nametags. A store called Takenoko inspired the clothes worn by the Takenokozoku, which were influence by traditional Japanese fashion. Their outfits were loose and baggy, and usually hot pink or bright blue or purple. They wore robes with kanji characters, and slippers that were comfortable for dancing. Large groups of Takenokozoku would choreograph dances in the streets of Harajuku, playing the current popular music on their boom boxes. 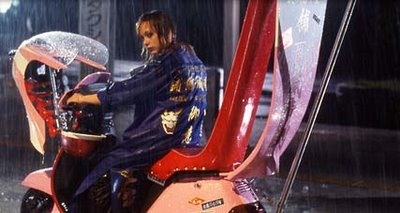 Motorcycle gangs became popular in Japan in the early 60s, and became known as Speed Tribes (Bosozoku). In the 70s, girl motorcycle gangs began to appear. At the time, it was estimated by police that at least 26,000 Japanese citizens were involved in a biker gang. By the 80s, the number of male biker groups began to decrease. However, more and more girl biker groups began to pop up. Yanki, heavily influenced by both the Bosozoku and the Sukeban, often wore sarashi (white cloth wrapped around the chest), an embroidered tokko fukku robe, and a gauze mask. The Bosozoku also owned customized scooters. 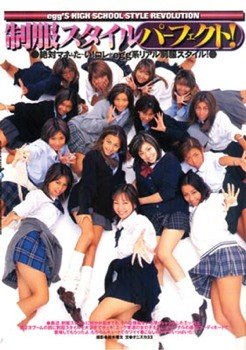 The word Gal has been used since the 80s in Japan to describe a girl who likes trendy clothing. Ko Gal was first used in the 90s by the media to describe an eighth grader who made $4000 a month for paid dating with middle aged men. Ko comes from the Japanese word for child, kodomo. Ko Gals tried to look as young as possible, by wearing the cutest accessories they could find. They wore their school uniforms with the skirts shortened, tanned their skin, and bleached their hair. And of course, the famous loose socks. Some girls would use sock glue to keep their loose socks from slipping. Although some Ko Gals of Shibuya did take part in enjo kosai (paid dating), it was not quite as popular as the media made it out to be. As the style spread from Tokyo to around Japan, Kogal movies, magazines, and TV programs became popular. Kogals were never seen without their phones, and they were some of the first avid young technology users in Japan. Ko Gal fashions has evolved into some of Japan’s present styles, such as Hime (princess) Gal. Hime Gal involves wearing expensive brand name clothing, usually of the pink and frilly variety. 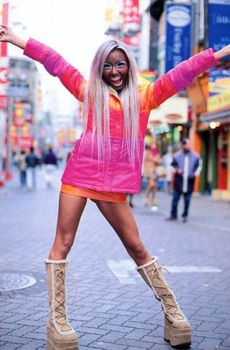 Although Ko Gals had tan skin, Ganguro girls took tanning to a new extreme. They would tan their skin every week, and then apply foundation meant for black women. Ganguro literally means “Black Face.” Besides tanned skin, the Ganguro look included platforms shoes, mini dresses, bleached hair, black ink used for eyeliner, blue contacts, and white concealer used for lipstick. A Gal magazine called Egg featured Buriteri, one of the most well known Ganguro, on its cover. The look was popular with groups of teenagers in Shibuya, however, they were often harassed, or viewed by the general public with disgust. By the end of 2001, the trend had died down and tanning salons began to close. 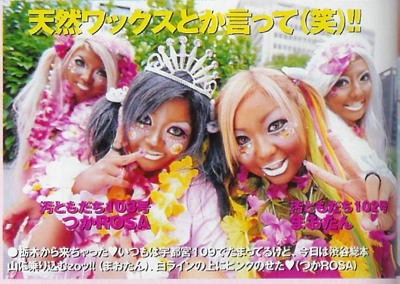 The Manba style, which is still seen today, shares many similarities with Gonguro. The name comes from the word Yamanba, the name of an ugly witch in a Japanese folktale (Yamanba was a term the media used for the Gonguro). Because of the dangers of tanning, they often use dark skin foundation instead. Groups of Manba participate in Para Para dancing, or quick synchronized movements to techno music. Groups of Manba form Gal circles, the most popular one being Angeleek. Boys who spent their time in the same clubs as Manba adopted their own similar style. They became known as Center Guys (after Shibuya’s Center Street). Manba clothes and accessories vary, but are always trendy and garishly bright. Manba makeup consists of white lips and large white circle around the eyes. Colorful decals are placed around the face, and rainbow hair extensions are also popular. 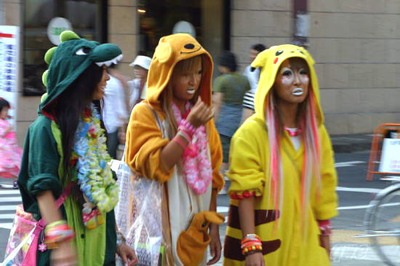 Kigurumin was a short lived (2003 to 2004) and strange fashion phenomenon. Girls who spent their time hanging out in Shibuya and wanted something comfortable to wear began sporting cheap animal costumes bought in party sections of stores. Along with a Pikachu, Hamtaro, or Winnie the Pooh costume, Kigurumin would carry animal purses, cute accessories, and wear manba makeup. 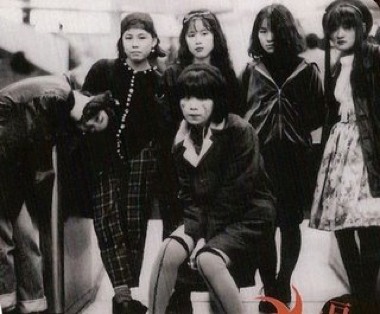 Nagomu was an indie record label created in 1983. The label gained a large fan base. The name for fans, Nagomu Gals, first appeared in the magazine Takarajima. Nagomu Gals favored vintage clothing. They often wore long sleeved t-shirts, thick soled rubber shoes, and knee socks. The term Nagomu Gal was not exactly positive, as they were sometimes viewed as annoying fan girls. In 1989 the Nagomu label was shut down. 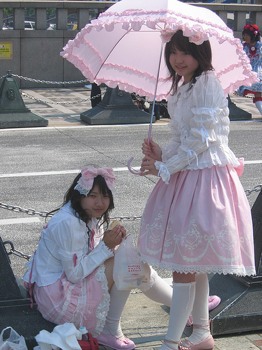 Lolita is one of the most popular new Japanese subcultures, and has begun to appear in countries across the world. There are numerous Lolita brands, such as Baby the Stars Shine Bright, Metamorphose, and Angelic Pretty. Lolita fashion began becoming popular in the late 90s, and like the Nagomu style, it has been influenced by music. Gothic record labels in Japan lead to visual kei music, which helped inspire Gothic Lolita clothing. Visual kei refers to bands which wear extremely elaborate makeup and costumes. Lolita is also inspired by the clothing of the Rococo period. The name came from Mana (from the visual kei band Malice Mizer) who called the theme of his clothing line Elegant Gothic Lolita. The popular magazine Gothic and Lolita Bible came out in 2001. There are several different types of Lolita. Gothic Lolita involves primarily black frilled clothing. Sweet Lolita uses pastels, and lots of lace and bows. For punk Lolita, plaids and chains are combined with the frills. Wa Lolita incorporates traditional Japanese clothing, such as kimono, into the look. Accessories that are popular for Lolita include bonnets and headdresses, rocking horse shoes, parasols, petticoats, and frilled knee socks. 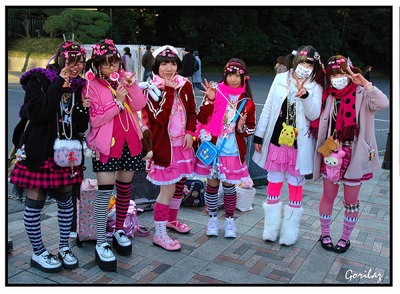 Decora is a Japanese street style popular today. In 1997, the magazine FRUiTS was created to display photographs of Japanese street fashion. Aki Kobayashi, the cover model of the first issue, wrote columns for FRUiTS about her style and how she created her own accessories. Soon, girls began making their own eccentric accessories. The style became known as Decora, and its followers traded and sold their accessories in Harajuku. Although each Decora outfit is unique, they all have the similarities of being extremely bright, decorative (hence the name), and cute. Decora girls wear an insane amount of plastic accessories and barrettes, neon skirts, colorful socks, and cute character products.