Following the success of some of our previous lists about the bizarre practices of humans through the ages (and up to modern times in some cases), we have prepared another list. This list includes only new items – excluding anything that has appeared on previous lists such as Tibetan Sky Burial or Thaipusam. In fact, we recommend you check out the Top 10 Bizarre Traditions, Top 10 Bizarre Festivals, and Top 10 Weird Religious Pratices before reading this list. 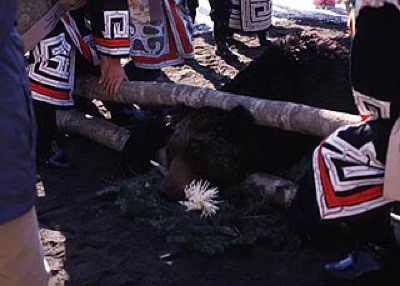 The Ainu people (an indigenous tribe from parts of Japan and Russia) are a once-suppressed ethnic minority whose religious roots are animist. Because of their worship of nature, they developed a tradition in which bears were killed in order to send their soul to heaven to bless mankind. This ritual (Iyomante) involves the slaughter of a hibernating mother bear in her cave. Her cubs are raised in captivity for two years and then fatally choked or speared in a sacramental act meant to show religious devotion. The villagers then drink the bear’s blood and eat its flesh. The skull is placed on an upturned spear which is wrapped with the bear skin. This bizarre type of scarecrow is then worshipped. The Ainu people believe bears are gods walking among humans. Unfortunately, due to a law change in Japan which revoked the ban on the ritual, it is now occurring again in some places.

9
Living With the Dead 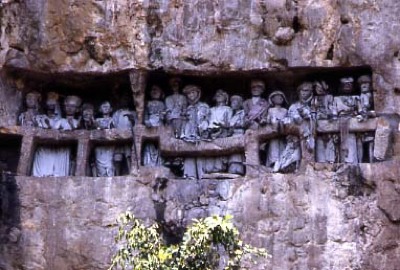 Because funerals are an incredibly important aspect of life for the Torajan (an ethnic group in South Sulawesi, Indonesia), it can take many months for a family to raise sufficient funds to pay for the festivities. During this period of months, the dead body is wrapped in clothes and kept under the family home. The Torajans believe that the deceased soul remains with them until the burial. Torajan funerals are a grand affair which also frequently involve the sacrifice of buffaloes (the more important the deceased the more buffaloes are killed). When the person is finally ready to be buried for good, their coffin is usually placed in a cave and their effigy is placed at the cave mouth looking out (as can be seen in the picture above). 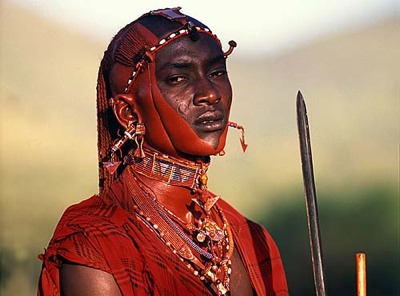 This isn’t just regular spitting we are talking about. The Masai tribe (an ethnic African group found in Kenya and Tanzania) have an unusual way of greeting friends: they spit on one another. Furthermore, when a new child is born, the Masai men will spit on it and say it is bad – believing that if they praise the child they will curse it to a bad life. When greeting elders, a Masai warrior will spit in his hand before offering it to be shaken – as a sign of respect. Masai tribesmen are well known through the media because of their practice of elongating their earlobes. 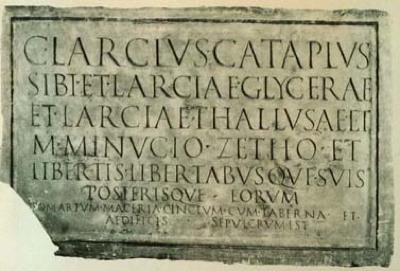 Fairly recent discoveries in the Vatican of old Roman burial grounds have uncovered a fascinating tradition that was previously forgotten: the Romans would eat with their dead and even feed them. Many of the graves found contained pipes that led from the outside of the grave to the body within – this was used to pour honey, wine, and other foods into the dead. Similar pipes in Roman Graves have also been found in England. Ancient Romans would often picnic at the graves of the dead as they believed they were feeding the soul of their departed loved ones. The inscription on the grave above describes the location of a food shop nearby so mourners and visitors can buy food for themselves or the dead. 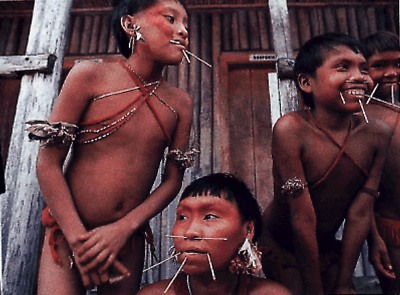 The Yanomamö are a large tribe of people from Venezuela and Brazil. They have been largely untouched by modern life and so retain many of their ancient customs – one of which is the focus of this item. Yanomamö religious tradition forbids the keeping of any part of the body of the dead; for this reason, when a Yanomamö dies, his body is taken to be burned and the bones are crushed and combined with the ashes. These are then divided amongst the family and eaten. Because absolutely no part of the body must remain, the vessel that contained the ashes is then destroyed. The tribesmen believe that a person dies because a Shaman or member of another tribe has sent evil on him. This leads to much conflict and inter-tribe battles. 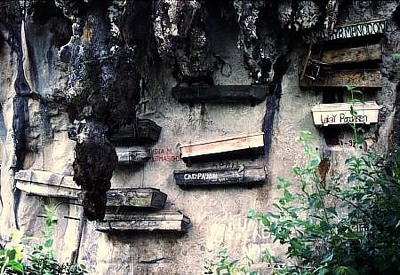 The limestone caves surrounding Sagada in the Philippines are home to the region’s dead. While many people are buried in the caves, a long standing tradition in the area also means that the face of the cliffs are dotted with coffins. The coffins can also be found in other places around the world – particularly China where the nearly extinct Bo People (an indigenous minority Chinese tribe) practice this tradition regularly. The Toraja people (featured in item 9) also sometimes hang coffins of young children – though wealthy adults are normally placed in caves. 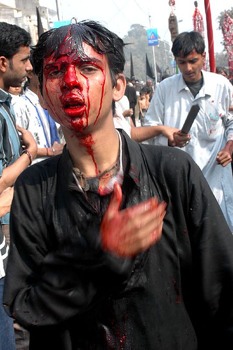 To commemorate the death of Husayn ibn Ali (a grandson of Muhammad), some groups of Shia muslims take to the streets and whip themselves with specially designed chains with razors or knives attached. Other groups slit their heads open with knives (as can be seen in the image above). This awful tradition (called matam) is also practiced by children or forced on them by parents who do the cutting (as can be seen in the introductory image to this list on the front page). Matam is mostly found in Bahrain, Pakistan, India, Afghanistan, Lebanon, and Iraq, and while some Muslims frown upon the practice, many major Muslim leaders endorse it.

Thousands of mourners slit open their heads with swords, big knives and razor blades streaming their blood to signify their grief over the martyrdom of Al-Imam Al-Hussein (p) – the tragedy which caused the sky to rain blood and the earth to bleed – and thus paid rich homage to Al-Imam Al-Hussein (p) who sacrificed everything in defending Islam which is today under obligation to him. [Source – including horrific images]

The Satere-Mawe people from the Amazon region of Brazil have an agonizing initiation rite for their boys. In order to become a man, the boy must insert his hand into a glove which is woven with drugged bullet ants which have one of the most painful stings in nature. The boy must wear the glove for a full ten minutes and he must do this twenty times over the course of several months. A television reporter (Steve Backshall) undertook the ordeal and described it thus:

“I put my hands into the gloves. Actually, it wasn’t that bad: pretty unpleasant, but bearable; just like the single sting, but repeated over and over again. I stuck it out for the full 10 minutes. [… M]y crew took me out of the line-up and off to get some medical tests done[.] That’s when things started to go wrong. I had suffered several hundred stings, and all of a sudden I went beyond pain. First, I started wailing, then, once that had passed, the floodgates opened — deep, guttural sobbing, uncontrollable shaking, writhing, convulsing. I started to drool, and suddenly I wasn’t responding to anything at all. My legs wouldn’t hold me up, and our doctor was shouting at me to keep moving and not to give in to the urge to lie down and let it take me. If there’d been a machete to hand, I’d have chopped off my arms to escape the pain.” [Source]

Every year in Solapur (a region in Maharashtra, India) parents get together to throw their babies off the top of a 50 foot tower. The babies are caught in a sheet held by other villagers on the ground. The parents believe that the practice will give their children long and healthy lives. This is practiced mostly by Muslims but some Hindu families also engage in it. Parents that partake are usually those who have become pregnant after praying at the Shrine of Baba Umer Dargah. Local authorities provide policing for the event despite the fact that national government is opposed to it. 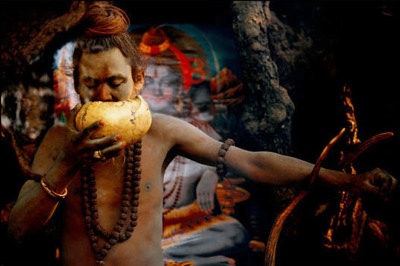 The Aghoris are members of a Hindu sect who worship Shiva, whom they see as the supreme god. Because they believe that Shiva created everything – they consider nothing to be bad. For this reason they engage in a variety of sexual practices, they drink alcohol, take drugs, and eat meat. Nothing is considered taboo. But the thing that makes their ancient traditions bizarre is that they are also practicing cannibals and their temples are cremation grounds. An aghori lives in the cremation ground and is able to support himself there – his clothing comes from the dead, his firewood comes from the funeral pyres, and food from the river. When a person is cremated, an aghori will coat himself in the ashes of the body and meditate on the dead.

The most shocking aspect of the Aghori life is their cannibalism. Dead bodies that are found floating in the river are gathered up and meditated on. The limbs are then removed by the Aghori and eaten raw. If you are interested in watching a fascinating documentary on the Aghoris, you can watch an excellent one here in full. A much more in-depth article on the aghoris can be seen here on Cogitz. It also includes a link to a much more gruesome video of the cannibalistic practices.