In an attempt to stay on top of the game, McDonald’s occasionally tried out new menu items. Some of them become a great success while others are destined to fail before they even begin. This list looks at 10 of the worst McDonald’s products which eventually fell into obscurity or vanished entirely. Feel free to mention your own favorite worst products in the comments.

This special McDonald’s burger – designed for the Japanese Market – was a dismal failure. Why did it fail? Perhaps it was the fact that it contained a deep fried Macaroni, shrimp, and mashed potatoes. Perhaps it was the fact that it was served on a bed of cabbage? Or perhaps it was the name which really is unlike anything ever seen at McDonald’s. Despite all of its failings, it does still show up as a seasonal offering in parts of Japan. This won wins the fail award not for losing money, but for being plain awful. For your viewing pleasure we have included a video clip of a Japanese advert for this abomination. 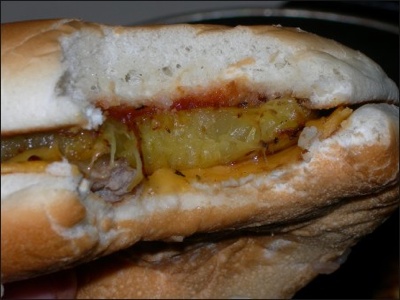 The Hulaburger was the most famous flop of Ray Krok (the man who bought the small time McDonald’s company and turned it into the mega-franchise we know today). The burger was created in 1963 was aimed at Roman Catholics who were forbidden to eat meat on Fridays. It was basically a cheeseburger but with a slice of pineapple instead of meat. The burger was a disaster – unlike the Filet-O-Fish which was being marketed at the same time by a Cincinnati franchise.

The McDLT (McDonald’s Lettuce and Tomato) was sold in a novel form of packaging. The meat and bottom half of the bun were prepared separately from the lettuce, tomato, American cheese, pickles, sauces, and top half of the bun. Both were then packaged into a specially designed two-sided container. The consumer was then expected to finalize preparation of the sandwich by combining the hot and cool sides just prior to eating. The first problem was that the packaging was unwieldy – but even worse: who wants to buy fast food and then put it together themselves? The atrocious video above is almost reason enough for this incredible failure of a product. It stars the famous Jason Alexander in one of the most awful adverts from the 80s. This burger eventually found its way back to McDonald’s rebranded, restyled, and actually put together for you, as the Big N’ Tasty. 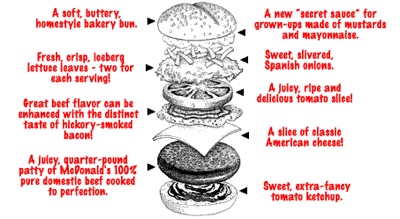 McDonald’s positioned the Arch Deluxe as a “hamburger for adults” — with a sophisticated, grown up taste. Arch Deluxe ads showed kids making “yucky faces,” turning up their noses at the new adult burger. They even showed Ronald engaged in “adult” activities like golf and pool. And the result of spending over $100 million on the Arch Deluxe campaign? As one Wall Street analyst put it: “They teed off one of the most expensive campaigns in history, and still we estimate that comparable store sales were down for the quarter.” A major management shake-up followed shortly thereafter. [Source] 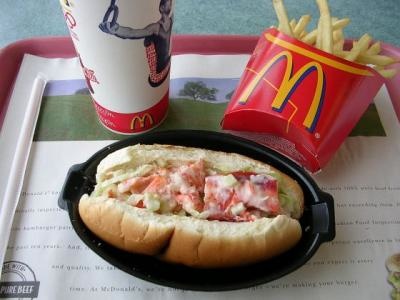 What did it fail? The price! Who wants to spend $5.99 on a fast food burger that you know will not satisfy your hunger? And let’s face it – it looks like someone threw up in a bun! This product is actually still available in some Canadian franchises and occasionally in Maine. Frankly, if you want lobster, you aren’t going to go to McDonald’s to get it. Perhaps next year they will introduce the McFoieGras or the McCaviar. 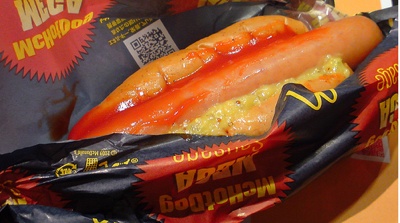 In his 1977 autobiography CEO Ray Kroc prohibited the company from selling hot dogs, regardless of potential demand, as he regarded them as unhygienic; however, hot dogs were introduced in the late 1990s at some midwestern located stores (at the option of the franchise-holder) as a summer item. UK Stores sold Hot Dogs during the late nineties on the McChoice menu (later PoundSaver). Also, at least one American restaurant offered Oscar Mayer hot dogs at some time, and McDonald’s locations at Toronto Metro Zoo and SkyDome in Toronto offered hot dogs until 1999. In Tokyo locations hot dogs were available in 2001, and have been reintroduced for 2009, dubbed the “McHot Dog.” Despite many attempts to revive the McHotdog, it just never sticks. 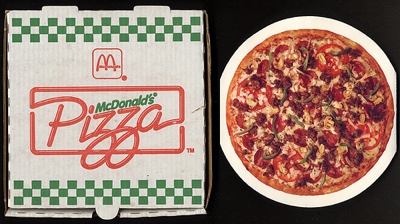 In the mid-nineties, McDonald’s decided to go into the pizza business; the resulting pizza was bland (like much of McD’s food offerings), and most people who actually wanted pizza went to a pizza place like they always had. The company and its frachisees were left on the hook for expensive new ovens and widened drive through windows that weren’t needed. Even saturation marketing wasn’t enough to change the pizza habits of ordinary Americans, and McPizza was gradually abandoned, and generally forgotten. Why did this product fail? In short, people didn’t associate McDonald’s with pizza and they could get better pizza elsewhere. [Source] 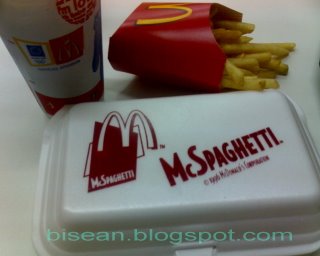 After testing pasta in the South in 1989, McDonald’s began testing a pasta-based menu at 40 units across Rochester, N.Y. in September 1991, including lasagna, fettuccine alfredo, and spaghetti with meatballs. In early 1990s a New Dinner Menu was tested for 6–12 months at two locations in New York and Tennessee. It consisted of the above mentioned pizza but also included lasagna, spaghetti, fettuccine alfredo, and roasted chicken as entrees. The side dishes included mashed potatoes and gravy and a vegetable medley. Like the McPizza, people just weren’t interested in eating pasta at McDonald’s. Recently the company tried pasta meals for kids in New Zealand and Australia – both countries are removing them (or considering it) from their menus due to low demand. 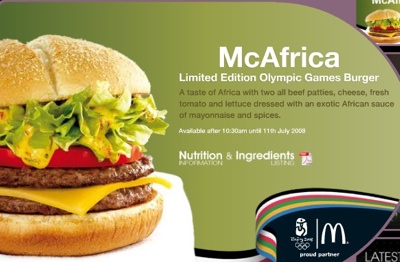 What is the worst thing you could possibly do when widespread famine in Africa is all over the news? Release and market a McAfrica burger – something to chow down on while watching the poor starving children on TV. The problem with this product was not in the poor flavor, it was in the poor taste timing of the advertising campaign. This is not the first time McDonald’s made this mistake – in 2002 they released the McAfrika in Norway which contained beef and vegetables in pita bread. The backlash was severe so McDonald’s put donation boxes for famine relief in all stores selling the product. With such brilliant marketing, perhaps we can look forward to a McHolocaust in the future.

The first problem with this burger was that men were turned off it (much like Diet Coke which lead to Coke Zero). The next problem was its taste. In the advert above you see that McDonald’s was marketing it as “low fat but tastes great” – but it didn’t. The fat that was removed was replaced with water – but to make the water stay in the meat, it was mixed with carrageenan – seaweed to you and me. The burger tasted awful, had a limited market, and failed dismally which is really no surprise.