History is a fascinating topic but so frequently we get things wrong and spread misinformation and myths. This list is the second in our series focussing specifically on historical errors. The first was written just under two years ago, so it is high time we saw another. Hopefully this list will help us all to help put an end to the mythologies that so many people believe today. 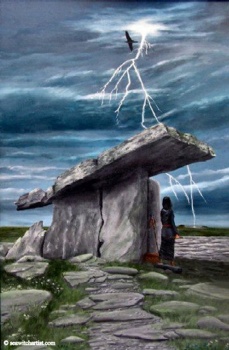 The Myth: An Old Religion was practiced in rural Europe until it was stamped out by the witchcraft persecutions, which killed millions of women. [Source]

The Witch-cult is the term for a hypothetical pre-Christian, pagan religion of Europe that allegedly survived into at least the early modern period. The theory was postulated by some 19th and 20th century scholars based upon the conspiracy theory that the European witchcraft which had been persecuted in the witch-hunt had been a part of a Satanic plot to overthrow Christianity, and indeed most of the evidence for the theory was compiled by studying the accounts of the persecutors in the witch trials in Early Modern Europe. The theory notably gave rise to several neopagan religions, such as Wicca and Stregheria in the 20th century. In fact, there was no “old religion” and modern day Wicca originated in the 20th century and was popularized by Gerald Gardner in 1954. 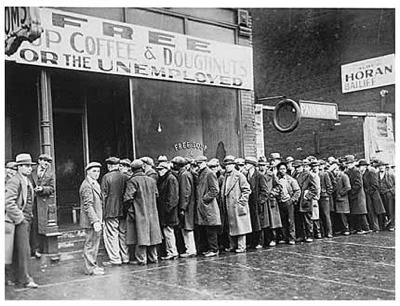 The Myth: Starvation was rife in the Great Depression

It is very common when hearing about the Great Depression to imagine hoards of families starving to death due to lack of food and money, but while money was, indeed, scarce, most people were able to survive through resourcefulness and charity. The depression meant hunger, malnutrition, overcrowding, and poor health. It gave rise to widespread poverty and suffering. While virtually no one died from starvation, many did not have enough to eat. People searched garbage dumps for food or ate weeds. It is the resourcefulness that people learnt during this time that helped to make rationing easier on the British during the Second World War. The replacement of a hands-off approach to the economy with a more regulated one by President Roosevelt has been blamed by many for the current economic crisis. 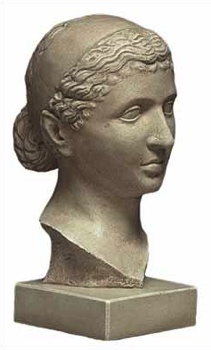 The Myth: Cleopatra was Egyptian

Though Cleopatra bore the ancient Egyptian title of pharaoh, the Ptolemaic dynasty (of which she was a part) was Hellenistic (Greek), having been founded 300 years before by Ptolemy I Soter, a Macedonian Greek general of Alexander the Great (depicted by Anthony Hopkins in the Oliver Stone film: Alexander). As such Cleopatra’s language was the Greek spoken by the Hellenic aristocracy, though she was reputed to be the first ruler of the dynasty to learn Egyptian. She also adopted common Egyptian beliefs and deities. According to tradition, saddened by the loss of her lover Mark Antony, she killed herself by means of an asp bite on August 12, 30 BC. 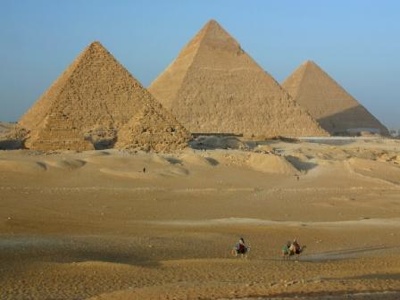 The Myth: Slaves built the pyramids

We have all seen the movies and heard the tales of slaves captured by Egyptian military excursions being used to build the pyramids and temples of Ancient Egypt, but, in fact, they are all completely wrong. Contrary to popular belief, excavated skeletons show that the pyramid builders were actually Egyptians who were most likely in the permanent employ of the pharaoh. Graffiti indicates that at least some of these workers took pride in their work, calling their teams “Friends of Khufu,” “Drunkards of Menkaure,” and so on—names indicating allegiances to pharaohs. 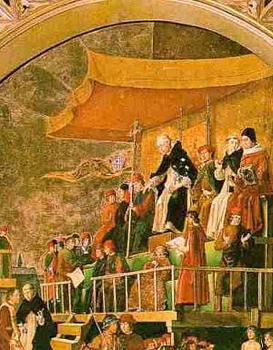 The Myth: The inquisition saw the slaughter of tens of thousands

The modern day notion of a unified and horrible “Inquisition” is an assemblage of the “body of legends and myths which, between the sixteenth and the twentieth centuries, established the perceived character of inquisitorial tribunals and influenced all ensuing efforts to recover their historical reality”. It was the relatively limited persecution of Protestants, mostly by the inquisitions in Spain and Italy, that provoked the first image of “The Inquisition” as the most violent and suppressive vehicle of the Church. Under the rule of the Protestant Queen Elizabeth I and threatened with military attacks from Spain, England found a new surge of nationalism being fueled by anti-Catholic propaganda centered on a series of books and pamphlets that detailed the horror of the “Spanish Inquisition”. But the reality? No more than 2,000 people who were tried by the Inquisition were executed. The Spanish Inquisition (which should not be confused with the Office of Inquisition which still exists in the Church as the Congregation for the Doctrine of the Faith) ceased operating on the 15th July 1834. 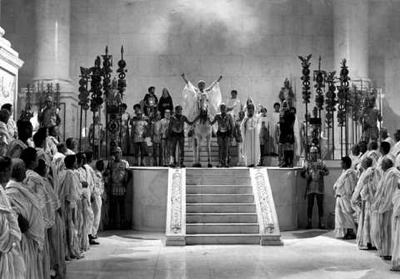 The Myth: Emperor Caligula made his horse a consul (a figurative head of the republican government)

Caligula’s love for his horse, Incitatus, was well known in his time and in present times, but the modern love of a good myth has promoted the horse to a far greater position than in reality. About seventy years after Caligula died, the historian Seutonius wrote of Caligula and Incitatus: “Besides a stall of marble, a manger of ivory, purple blankets and a collar of precious stones, he even gave his horse a house, a troop of slaves and furniture, for the more elegant entertainment of the guests invited in his name: and it is also said that he planned to make him consul.” The fact that this was not a first hand account (hence saying: “it is also said”) the report is dubious. There are no other records that indicate that Caligula did ever indicate that he planned to raise Incitatus to such an important place – let alone do it. 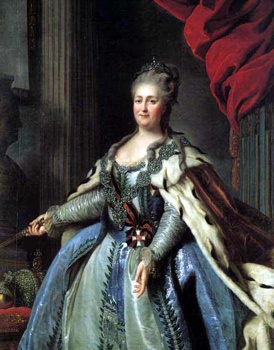 The Myth: Catherine the Great died whilst having sex with a horse

While this myth is very amusing (no doubt the reason for its popularity), Catherine died in bed of illness; there were no equines involved and a Catherine/horse nexus was never attempted. So how did the myth arise? During past centuries the easiest way for people to offend and verbally attack their female enemies was sex. Catherine the Great was always going to attract rumours about her sex life, but her voracious sexual appetite – while modest by modern standards – meant that the rumours had to be even wilder. Historians believe the horse myth originated in France, among the French upper classes, soon after Catherine’s death as a way to mar her legend. [Source] 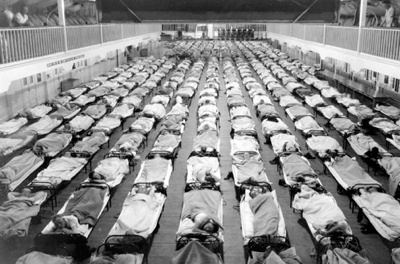 The Spanish flu pandemic (the same virus as Swine flu) lasted from March 1918 to June 1920, spreading even to the Arctic and remote Pacific islands. It is estimated that anywhere from 50 to 100 million people were killed worldwide, or the approximate equivalent of one third of the population of Europe. Although the first cases of the disease were registered in the continental US and the rest of Europe long before getting to Spain, the 1918 Flu received its nickname “Spanish Flu” because Spain, a neutral country in WWI, had no special censorship for news against the disease and its consequences. Hence the most reliable news came from Spain, giving the false impression that Spain was the most—if not the only—affected zone. So thanks to the honesty of Spain, they are now marred forever by the title of the worst flu epidemic in modern history. 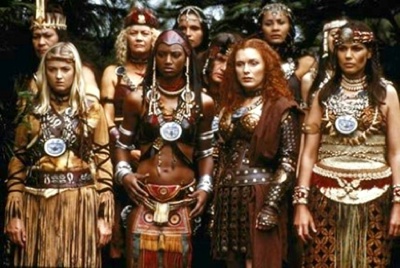 The Myth: Amazons were women who cut off one breast so they could use a bow and arrow better

Considering how ridiculous this story is, it is hard to believe that so many people believe it. This element of the Amazon myth was invented in the 5th century B.C. The poor Amazons had to start mutilating themselves because some big boob thoughtlessly dabbled in the dark art of etymology without the proper equipment. Hellanicus of Lesbos imagined the name was derived from the Greek prefix a- (“without”) and mazos, a variant of mastos (“breast”). He was surely wrong, but his folk etymology is still firmly embedded in the collective consciousness after more than two dozen centuries. There was no hint before his time, either in writing or art, that the Amazons had anything other than usual complement of breasts, so we can safely assume that the one-breasted image we have of them flowed from the (false) etymology and not vice versa. [Source] 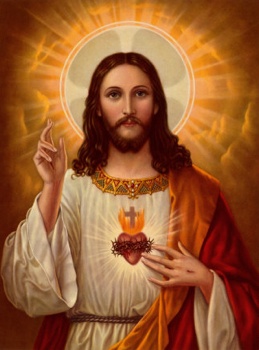 First of all, Jesus probably did have a knowledge of Hebrew, but he didn’t speak it. The language spoken by Jesus (and the apostles) was Aramaic. Aramaic is a semitic language and it was the day-to-day language of Israel from 539 BC – 70 AD. In fact, contrary to popular belief, some parts of the Bible were never written in Hebrew – but rather Aramaic – chiefly Daniel and Ezra. It is also likely that Jesus was fluent in Greek as this was the secondary language of the region and it was the language of the common version of the Bible used by the Jews at the time. Even one of the most well know sayings of Jesus upon the Cross is Aramaic: “Eloi Eloi lema sabachthani?” meaning “My God, my God, for what have you forsaken me?”