Mankind has the honor of quite possibly being the most destructive force to ever hit mother nature. This list looks at some of the more recent, probably lesser known extinctions that humans have lent a helping hand to. Whether by over hunting or over population, driving a species to extinction is nothing to be proud of and it’s certainly not slowing down. 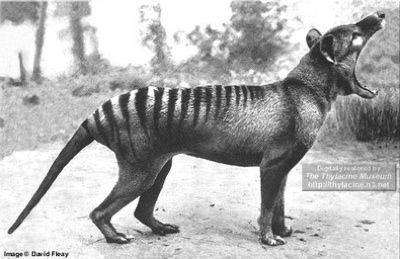 Commonly known as the Tasmanian Tiger, the Thylacine was the largest known carnivorous marsupial of modern times. Virtually wiped out in the wild due to constant hunting (they were thought to be a threat to sheep and other small farm animals) and the encroachment of humans on their already limited habitat the Thylacine was finally recognized as being in danger of becoming extinct in 1936, too little, too late as that same year the last Thylacine, named Benjamin, died on 7 September as the result of neglect — locked out of its sheltered sleeping quarters and exposed to freezing temperatures at night in Hobart Zoo, Tasmania. 60 years on there are still claims of sightings but all are yet to be confirmed. 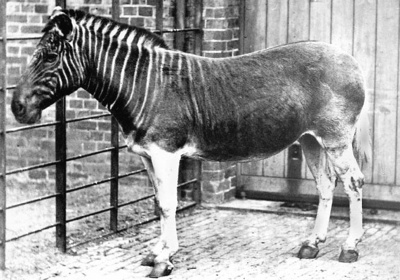 The Quagga was a southern subspecies of the Plains Zebra. It differed from other zebras mainly in having stripes on the head, neck, and front portion of its body only, and having brownish, rather than white, on its upper parts. The last free Quaggas may have been caught in 1870. The last captive Quagga, a mare, died on 12 August 1883 in Amsterdam Zoo, where she had lived since 9 May 1867. It was not realized that this Quagga mare was the very last of her kind. Because of the confusion caused by the indiscriminate use of the term “Quagga” for any zebra, the true Quagga was hunted to extinction without this being realized until many years later. The Quagga became extinct because it was ruthlessly hunted down for meat and leather by South African farmers, also they were seen by the settlers as competitors, like other wild grass eating animals, for their livestock, mainly sheep and goats. 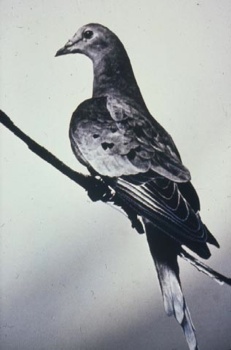 The story of the Passenger Pigeon is one of the most tragic extinction stories in modern times. As recently as around 200 years ago they weren’t anywhere near extinction. In fact, they were actually the most common bird in North America, and some reports counted single flocks numbering in the billions. Pigeon meat was commercialized and recognized as cheap food, especially for slaves and the poor, which led to a hunting campaign on a massive scale. Furthermore, due to the large size of their flocks, the birds were seen as a threat to farmers. The last Passenger Pigeon, named Martha, died alone at the Cincinnati Zoo at about 1:00 pm on September 1, 1914. 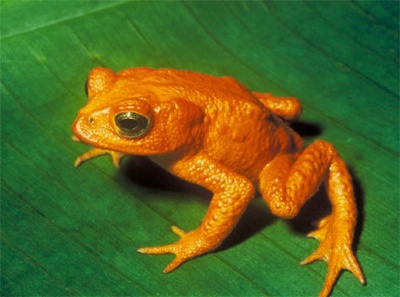 The first record of the Golden Toad was by herpetologist Jay Savage in 1966. The toad, recognized by its brilliant golden orange color, was native to the tropical cloud forests which surround Monteverde, Costa Rica. None have been seen since 1989. It last bred in normal numbers in 1987, and its breeding sites were well known. In 1987, due to erratic weather, the pools dried up before the larva had matured. Out of potential 30,000 toads, only 29 had survived. In 1988, only eight males and two females could be located. In 1989, a single male was found, this was the last record of the species. Extensive searches since this time have failed to produce any more records of the golden toad.

The Caribbean Monk Seal was the only known seal which was native to the Caribbean Sea and the Gulf of Mexico. It is also the only species of seal to go extinct directly due to human causes. The Caribbean monk seal was the first New World mammal to be discovered by Columbus and his company on the coast of Santo Domingo in 1494. It appears in the account of Columbus’ second voyage to America. Columbus promptly ordered his crew to kill eight of the animals, which he called “sea-wolves”, for food, paving the way for exploitation of the species by European immigrants who came in his wake. Since then, the once abundant seals have been hunted for their oil and slaughtered by fishermen, who regarded the animals as competitors. It was officially declared extinct just last year, on June 6th, 2008, although the last recorded account of the species was made at Serranilla Bank between Honduras and Jamaica in 1952. Like other true seals, the Caribbean Monk Seal was sluggish on land. This, along with its lack of fear for man, unaggressive and curious behavior, as well as human hunting, and early habitat exclusion by humans throughout their range may have dramatically speed up their decline and likely contributed to its demise. 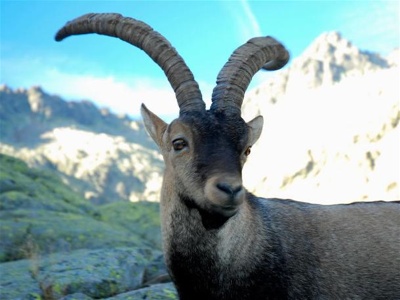 The Pyrenean Ibex has one of the more interesting stories among extinct animals, since it was the first species to ever be brought back into existence via cloning, only to go extinct again just seven minutes after being born due to lung failure. The Pyrenean Ibex was native to the Pyrenees, a mountain range in Andorra, France and Spain. The Pyrenean ibex was still abundant in the fourteenth century (Day 1981). The Pyrenean ibex’s population declined due to a “slow but continuous persecution” and disappeared from the French Pyrenees and the eastern Cantabrian mountain range by the mid-nineteenth century. Its situation has been critical since the beginning of the 20th century, when it was estimated that the Pyrenean population in Spain numbered only about 100 individuals. Since the beginning of the 20th century, the population never rose above 40 individuals. In 1981, the population was reported to be 30. At the end of the 1980’s the population size was estimated at 6-14 individuals. The last naturally born Pyrenean Ibex, named Celia, died on January 6th, 2000, after being found dead under a fallen tree at the age of 13. That animal’s only companion had died just a year earlier due to old age. 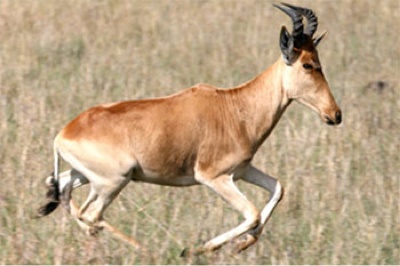 Although it once roamed throughout Northern Africa and the Middle East, the deep-rooted mythology (once domesticated by the ancient Egyptians as a food source and for sacrificial purposes) which surrounded the animal was not enough to save it from European hunters who began hunting them for recreation and meat. People who resided in Morocco shot these animals for fun, and for hunting, which wiped large herds of them out. Many Hartebeests were captured and were kept alive (e.g. in the London Zoo from 1883 to 1907), but they eventually died out. The last Bubal Hartebeest was probably a female which died in the Paris Zoo in 1923. 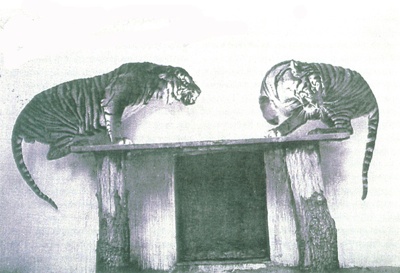 Javan Tigers were a subspecies of tigers which were limited to the Indonesian island of Java. In the early 19th century Javan tigers were so common, that in some areas they were considered nothing more than pests. As the human population increased, large parts of the island were cultivated, leading to a severe reduction of their natural habitat. Wherever man moved in, the Javan tigers were ruthlessly hunted down or poisoned. Natives carried much of the hunting out, a surprising thing since they considered the tiger a reincarnation of their dead relatives. The last specimen to have been seen was sighted in 1972, although there is evidence from track counts that the animal had lingered into the 1980’s. The last track counts to yield evidence of the tigers was held in 1979, when just three tigers were identified. The leading cause of their extinction was agricultural encroachment and habitat loss, which continues to be a serious concern in Java. 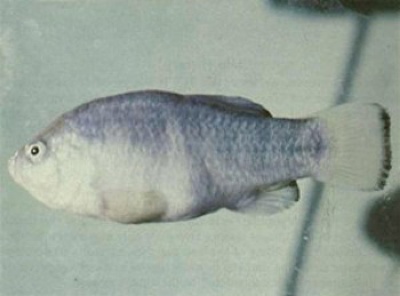 The Tecopa Pupfish was native in the Mojave Desert, in Inyo County, California, United States of America. This fish subspecies was originally found only in the outflows of North and South Tecopa Hot Springs. It was first described by Robert Rush Miller in 1948. Its decline began in the early 1940s when the northern and the southern spring which were about 10 yards apart were made into canals and bathhouses were build. The popularity of Tecopa Hot Springs in the 1950s and 1960s led to the building of hotels and trailer parks in that area. By 1981 the Tecopa Pupfish was officially delisted by the United States Fish and Wildlife Service and it became the first animal which was officially declared extinct according to the provisions of the Endangered Species Act of 1973. 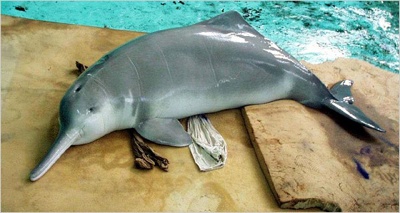 The Baiji population declined drastically in recent decades as China industrialized and made heavy use of the river for fishing, transportation, and hydroelectricity. As China developed economically, pressure on the river dolphin grew significantly. Industrial and residential waste flowed into the Yangtze. The riverbed was dredged and reinforced with concrete in many locations. Ship traffic multiplied, boats grew in size, and fishermen employed wider and more lethal nets. Noise pollution caused the nearly blind animal to collide with propellers. In the 1970s and 1980s, an estimated half of Baiji deaths were attributed to entanglement in fishing gear. Only a few hundred were left by 1970. Then the number dropped down to 400 by the 1980s and then to 13 in 1997 when a full-fledged search was conducted. The dolphin was declared functionally extinct after an expedition late in 2006 failed to record a single individual after an extensive search of the animal’s entire range.