[WARNING: contains images that might offend – including spiders] We’ve all woken up in a cold sweat. We’ve all tossed and turned to escape the monsters roaming our worst dreams. Our vivid imaginations all but come to life at night, many times displaying images so frightening and so disturbing, that upon waking to find it was a dream, we fear going back to sleep. Waking up is the only solace we may get from the parade of freaks in our heads.

Or, that’s what we thought, anyway.

Here are ten real animals, so dangerous, disturbing, or at the least, butt-ugly, that may have inspired the occasional bad dream. The true nightmare, however, would be to wake with one of monsters sitting on your chest. Sleep well!

We’ll start with perhaps the least harmless. A deep sea scavenger that puts your local harmless wood lice to shame, these bottom-feeding scavengers can reach up to around a foot in length. Close your eyes and imagine sitting in the garden, playing with the potato bugs, when this thing gets jealous and comes hurtling out of the bushes for its turn. An impossible scenario, considering the isopods are deep-sea kinda guys, but you can see why a hyper-sized version of the only bug cute enough to handle is nightmare material. Plus did you see the way they ravaged that tuna in the clip?

Aww, that looks like a little weevil! Why is it on the list? Chemical warfare. This little beetle is about as cute as a beetle can be, and the largest ones are tiny at best. Nightmare material? Hardly. But it isn’t called the bombardier beetle for nothing. When it is threatened, the beetle aims its convenient butt-nozzle at its attacker, and instantly makes them regret their choice of dinner. At the end of their abdomen, two separate chambers store hydroquinone and hydrogen-peroxide. When it is threatened, the beetle contracts the chambers, combining the two materials which violently react and produce a spray roughly the same temperature as the boiling point of water. The video speaks for itself. 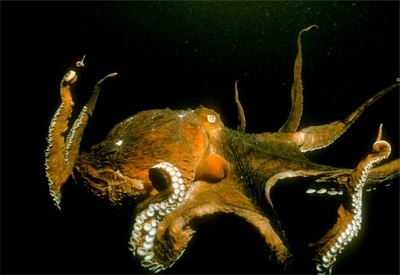 It would have been too easy to include any number of squid, but I think it was about time for the giant octopus to get some recognition. Normally shy by nature, the octopus can be deadly when it wants to be, as evidenced by this somewhat over-dramatic video. But the main source of nightmare material is the size. While 33 pounds doesn’t sound too bad, a 14-foot arm span just sounds terrible. I won’t go on about the venomous beak.

Naturally at least one enormous snake had to make the list. It isn’t the longest snake, but at 20 feet and 550 pounds, it’s the biggest. The wetlands-dwelling serpents regularly make lunch out of jaguars and caimans. Humans tend to be a bit too big for breakfast, lunch, or dinner, but it isn’t unheard of. Keep the children close in South America. 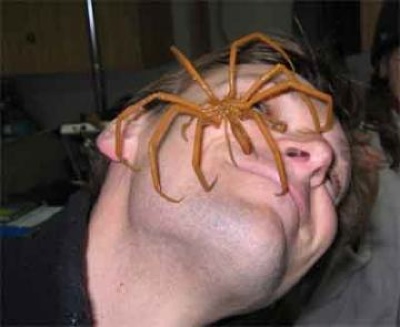 Oh! Cruel joke on my part! I went with the much lesser known scientific name, so you arachnophobic slow-scrollers would run head on into the picture of… The camel spider. While the first spider on our list (yeah, FIRST) isn’t actually technically a spider, you cringed anyway. So did I. Camel spiders belong to a distinct separate order, like (but not the same as) scorpions and harvesters. While many different species actually inhabit territories all over the world (including Australia), the most well-known remains the desert dwellers (they can also be found in grasslands or forest habitats). Many urban legends exist, vastly exaggerating all qualities of these monsters. You would be one of the (un)lucky few who have ever witnessed a specimen over 3 inches if you were to see such a thing. But, leg spans can reach up 5 inches. Other myths are that they numb humans and eat part of them while they sleep, disembowel camels, scream or squeal, and leap through the air. All false. Although, the creatures have been known to hit up to 10 miles per hour. 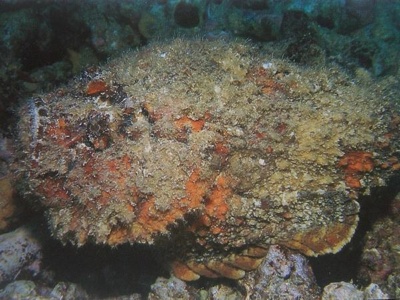 You are walking along a beautiful beach, shin-deep in the foamy, churning waves. You can feel the algae-covered stones beneath your feet. You step around the larger ones onto the smaller ones, feeling them with your bare toes. All of a sudden, you feel a sting on the bottom of your foot. You yelp in pain, run out of the water, and look at the small puncture wound on the bottom of your foot. The neurotoxin from the world’s most venomous fish seeps into your body, and the countdown commences. You must seek help immediately, or else you will face death. The fish, disguised convincingly like a rock, goes about its business, flustered at most by the intrusion. You run to get help, trying not to step on the wound caused by the fish’s poisonous spur on its backbone. 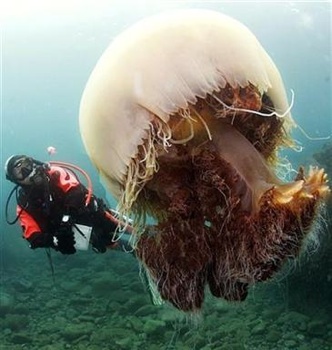 This fairly common jellyfish isn’t really too bad overall. It varies in size, its sting is very painful but rarely fatal (although it may leave a nasty burn), and that is just about that. Generally speaking, it is not the best contender for a list of nightmarish creatures but the Lion’s Mane Jellyfish has been known to reach enormous sizes. The bell of the Jellyfish can reach up to 8 feet in diameter, and the tentacles may trail up to 100 feet! Now visualize yourself diving in the vast open ocean with one of these suckers for company. 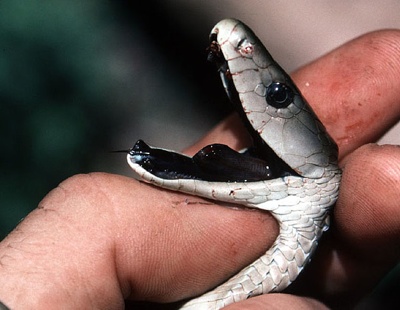 Black Mamba enjoys sunning himself, eating rodents and birds, and fighting off elephants. This serpent can exceed 8 ft. in length. As far as venomous snakes go, Black Mambas are beaten only by the 16 ft. achieved by the King Cobra. But why is the Black Mamba on here, and not the cobra? Well, every snake will run when it can, and attack when it’s cornered. Except the Black Mamba. It usually runs, but when it is startled, its knee-jerk reaction is to bite first, then run, even if it had plenty of time to slither away. Also, it has been known, when pursued, to just get sick of running and turn around to face its attacker. These snakes can also slither at speeds of up to 12 mph, and a single bite is enough to kill 20-25 grown men.

Those who have heard of the Honey Badger know very well why it is on the list. For those who don’t know, allow me to tell you. First of all, I know. “Honey badger”? On this list? Doesn’t sound all that bad. Truthfully, it kind of sounds like an animal I wouldn’t mind having as a pet. I think I could probably feed it potato chips through the hole in my screen door. Well, don’t. Not in you value your fingers. Honey badgers are the most aggressive animals alive. They will consume venomous snakes, stand up against elephants, and eat honey straight out of the hive while being swarmed by bees. And African bees are the source of the ultra-aggressive killer bees known to terrorize the Western Hemisphere. They will quickly devise their enemies’ weakest points and relentlessly attack it (i.e. the gonads on a human male). I’ll send everyone of with a quote directly from Wikipedia:

In a 2002 National Geographic documentary titled “Snake killers: Honey badgers of the Kalahari”, a badger named Kleinman was documented stealing a meal out of a puff adder’s mouth and casually eating the meal in front of the hissing snake. After the meal, Kleinman began to hunt the puff adder, the species being one of the badger’s preferred venomous snakes. He managed to kill the snake and began eating it, but then collapsed on the dead snake as he had been bitten during the struggle. After about two hours he surprisingly awoke. Once his paralysis had subsided, the badger continued with his meal and then resumed his journey.

The video above, starting at 2:28, is the video of the story from Wikipedia. It really is amazing. In short, if you gather nothing else from this list, remember this: don’t mess with a honey badger. 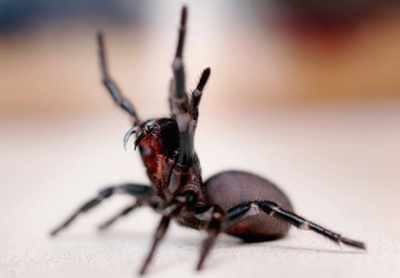 Oh, Australia, what beautiful, majestic creatures you have. And by beautiful majestic creatures, I mean marsupials, venomous snakes, and the God-awful Sydney Funnel Web Spider. Incredibly aggressive, dark colored and glossy, with killer huge fangs and nature’s worst attitude, getting bitten by one of these things should be on your “Things to Never do Ever” list. The spiders dig tunnels or take up residence in trees, creating tunnels with trapdoors and trip lines so they know when to swing open the door.

The male spiders wander and are attracted to water. They can survive being stuck in the pool for up to 24 hours! Approaching one, or God forbid, attempting to handle one is a very excellent way to get bitten. They bite multiple times, nearly always delivering full envenomation, and will not let go. They must be grabbed and removed, as trying to shake them off usually isn’t enough to loosen the grip of their gigantic fangs. They have what is called atraxotoxin, which is highly toxic to primates. Humans are primates. I’m thoroughly convinced that if there is a Hell, one of it’s gates, or at least a fire exit, opens in Sydney, Australia.