Caimans, crocodiles, and alligators are among Earth’s most successful reptiles. Despite being intensely studied, crocodilians manage to keep their mysteries. For some reason, insects love their tears and orange crocodiles are evolving in caves.

The reptiles also hang around in trees, use pool noodles, and make for surprising mummies. While they continue to eat people at a disturbing rate, crocodiles could help mankind in unusual ways. They have a future as prison guards, and their blood holds the key to defeating HIV. 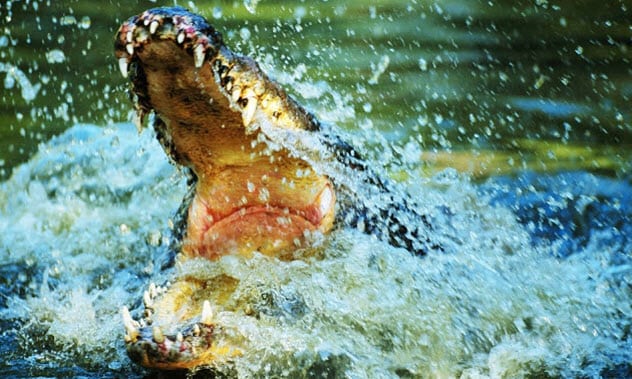 Ethiopia’s second-biggest lake is called Abaya. The murky water obscures a vast population of crocodiles. The reptiles are underfed because the lake’s fish are disappearing. Starving, hard-to-see crocodiles might deter most people from wading into the water. But not a Protestant congregation from the nearby town of Arba Minch.

In 2018, 80 people trooped down to the lake for a mass baptism. The event baptized only one person . . . because things went terribly wrong. When the vicar, Docho Eshete, was about to baptize the second individual, a crocodile exploded from the water. During the attack, the civilian was knocked aside but the reptile snatched Eshete.

Fishermen tried to net the creature before it could swim deeper into the lake, and church members ultimately succeeded in pulling the clergyman away from the crocodile. Sadly, Eshete was already dead.[1] 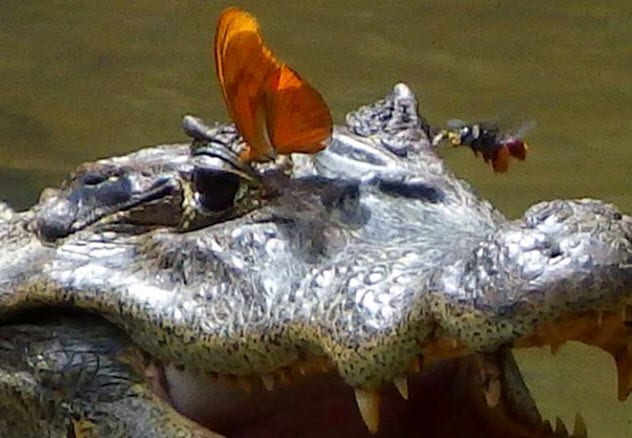 In 2013, researchers floated down the Puerto Viejo River in Costa Rica. During the boat ride, the crew took photographs of wildlife. Something odd turned up. Several times, butterflies and bees fluttered around the eyes of crocodilians.

In one case, the insects could be seen drinking the tears of a spectacled caiman (Caiman crocodilus). The team wondered what was going on. Their research revealed that they were not the phenomenon’s first witnesses.

Back in 2012, scientists documented bees slurping the tears of turtles. Other studies reported that butterflies also visited turtle eyes. Photographs from tourists and wilderness photographers had already recorded the unusual behavior.

Clearly, the insects use reptile tears as a survival source of some kind. The likeliest explanation was salt mining. Sodium is critical to the metabolism and breeding of insects. They may also benefit from other elements like micronutrients, proteins, and enzymes. It remains unclear whether the reptiles receive any perks in return.[2] 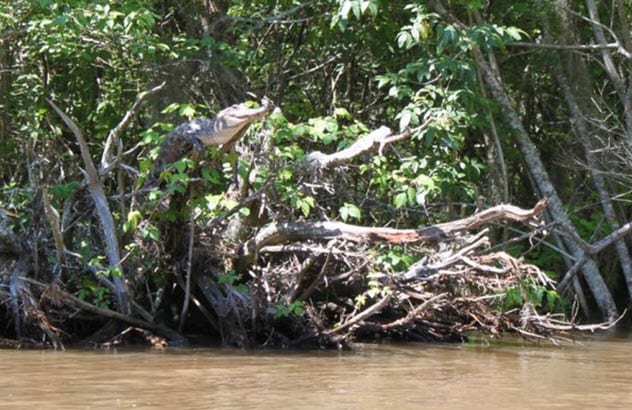 Crocodiles roost in trees. This is not as rare as one might think. Four species of tree-basking crocodiles have been identified across three continents.

In Mississippi, an American alligator (Alligator mississippiensis) was photographed on a branch 2 meters (6 ft) above the Pearl River Delta. In Central Africa, a slender-snouted species scaled a 4-meter-tall (13 ft) bank to clamber onto a branch. Most climbing crocodiles were small juveniles, but the biggest case involved a Nile crocodile measuring 2 meters (6.5 ft) long.[3]

Researchers believe that two things encourage odd behavior. Most climbers were recorded in areas with limited basking areas. The cold-blooded creatures need the Sun’s warmth. Lacking the space on the ground, a branch will do.

Also, when approached, the reptiles fell off the branches and disappeared underwater. This suggested that they also used the high vantage point to survey their environment and, if necessary, to make a quick escape. 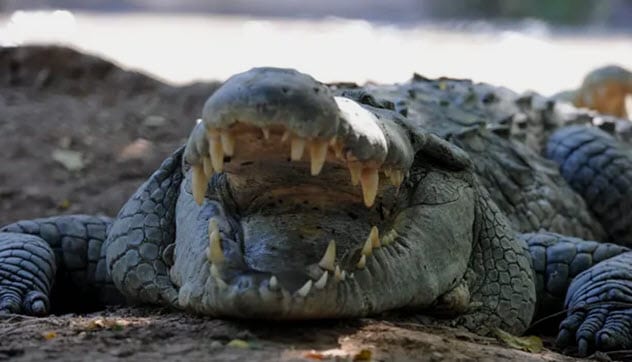 The country’s anti-drugs chief, Budi Waseso, hit upon a novel idea. To solve the crisis, he needed scary guards with no interest in bribes or snorting cocaine. So why not use crocodiles?

The agency wants to build a prison on an island where the only residents would be drug convicts on death row. Instead of human officials, the island would be crawling with the reptiles.[4]

According to Waseso, the idea is still in the early stages. But he is dedicated to finding the most aggressive crocodiles he can and carting them off to the island in huge numbers. 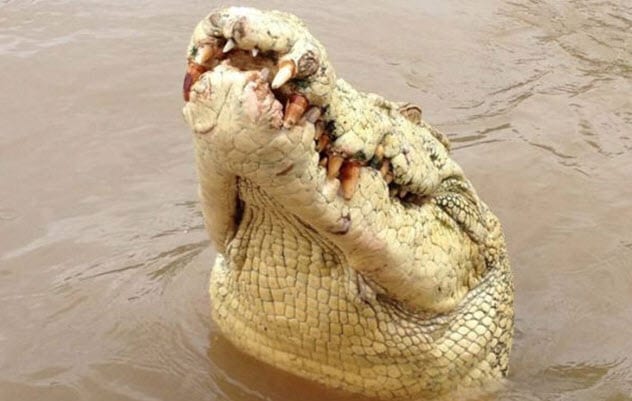 In Australia, a rare crocodile cruised the Northern Territory’s Adelaide River. The large male was a semi-albino. Most of his body was the normal dark color one would expect of these reptiles. The head, however, was hypo-melanistic. It had a yellow color that resulted from abnormally low pigment levels. The lethal creature was the dominant male in the region.

In 2014, he attacked and killed a fisherman who ventured too deep into the river. Hours later, the crocodile was shot dead. An examination of the body showed that he was a formidable survivor.

Few albino crocodiles survive into adulthood because their bright bodies fail to provide camouflage. Not only did this male mature but he also participated in horrific battles. His body was covered in scars, limbs were missing, and a particularly violent opponent had torn a large chunk out of his flank.[5] 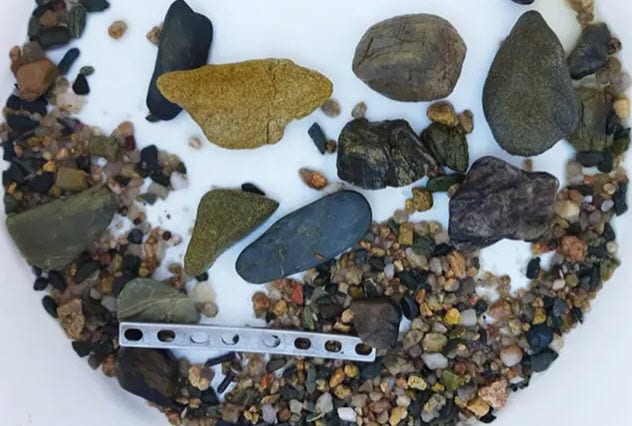 MJ the crocodile lived at Koorana Crocodile Farm near Rockhampton in Queensland. MJ was a big reptile, measuring 4.7 meters (15.4 ft) long. In 2019, the animal died after a brawl with another beefy crocodile at the farm. An autopsy was done to determine the cause of death. Surprisingly, the stomach contents included an artificial device.

It was an orthopedic plate with six stainless steel screws. The sheet’s age (it was an older model) suggested that it was ingested as long as 50 years ago—along with the person or pet it belonged to. Unfortunately, decades of drifting around in stomach acid had eroded the serial number that could have identified the patient. The only additional clue was that it was manufactured in Switzerland.

MJ had lived at Koorana for six years and had come from another farm. However, the crocodile was born in the wild. The general feeling is that he ate a human before he was captured and that the plate could solve a cold case involving a missing person.[6] 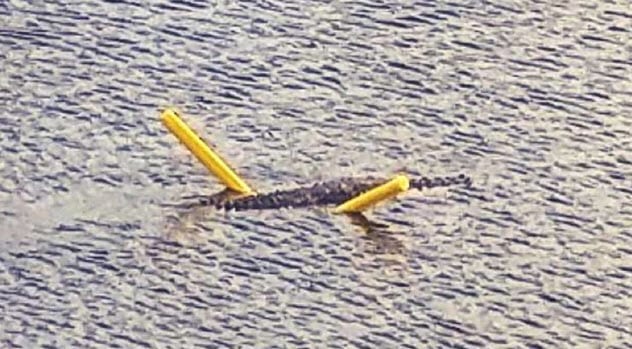 The home of Victor Perez was located in Key Largo, Florida. In 2018, Perez was on his balcony when he noticed something floating in the nearby canal. It was a bright yellow pool noodle. With their buoyancy and bendiness, these devices double as pool toys and swimming aids. Only this pool noodle was not being used by a human.

To Perez’s shock, a crocodile lounged on the tube and used it to cruise through the water. While crocodiles are known to visit the canal, this was the first time that one floated by looking cool on a noodle.[7]

It was not clear how the swimming aid ended up in the canal, what happened to its human owner, or why the large reptile was so casual about the whole thing. Perez posted photos of the sighting on his Instagram account. 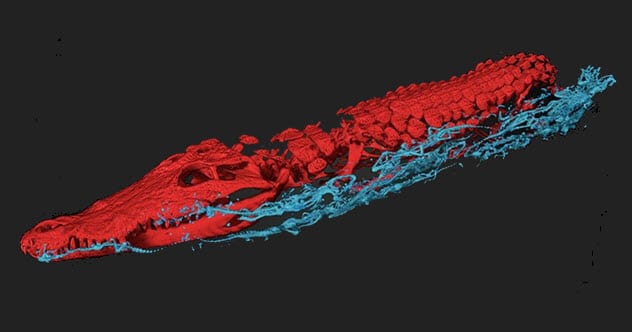 Since 1828, a crocodile received visitors at the National Museum of Antiquities in the Netherlands. The 3-meter-long (9.8 ft) “creature” was mummified around 2,500 years ago. During the 1990s, X-rays proved that two adults were used to make it look like one big crocodile. The images also showed blue anomalies. But the plates lacked detail, and they remained unidentified.

In 2016, the museum staff decided to scan the mummy again. Nobody thought about the blue blips. Instead, the artifact was scanned to create a program that would allow visitors to perform a virtual autopsy on the mummy. However, when the cutting-edge images returned, they held an unexpected surprise.[8]

The blips were 47 baby crocodiles that had been mummified and stuffed inside the adult. The collection was probably created to honor Sobek, an Egyptian god with the body of a man and the head of a crocodile. 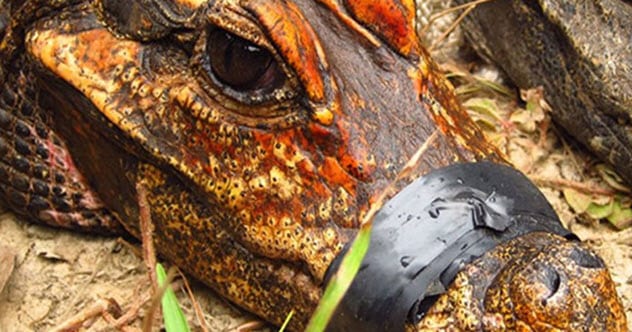 In 2008, Central Africa produced a unique crocodile. Discovered in Gabon, the dwarf crocodiles lived in dark caves and ate crickets and bats. They also had orange scales. Soon, genetic tests showed that their DNA was unlike that of any other crocodile.

The exciting part was that they were still evolving into a new species and researchers could be there every step of the way. The rapid mutation rate was unusual, but it likely stemmed from their dark habitat and isolation.

As to why they look like pumpkins, you can blame (or thank) bat excrement. The bats drop guano into the water where it releases large amounts of urea, a chemical that tans their hides. This could also explain why the crocodiles turn more orange with age.[9]

Strangely, only the younger crocodiles go outside to reproduce. They need rotting vegetation to incubate their eggs, a material that is unavailable inside the caves. Nobody knows if the older ones keep breeding inside the caverns. If so, they are using an unknown incubation method. 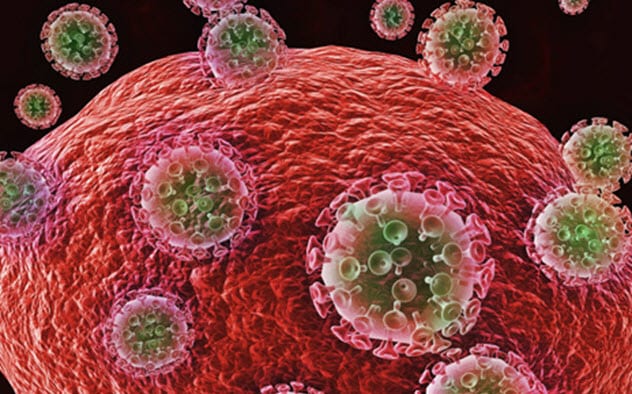 According to researchers, the key to curing HIV and antibiotic resistance could be crocodile blood. In 2019, a study noticed something interesting. Crocodiles inflict grievous wounds on each other, but despite living in bacteria-infested water, they heal.

The crocodile version took to the strains like a reaper and destroyed all of them, including the deadly MRSA. It also significantly shrank HIV in human blood. Additionally, when human cells were infected with HIV while the reptile blood was present, the infection was suppressed. This discovery could help unravel how HIV tampers with the body’s immune system and how to defeat the virus.[10]