There is something about birds of prey that make us pay attention – maybe it is the inherent fear we all have that one will attack us – or perhaps it is just because they are seldom seen by most westerners. Regardless, birds of prey are fascinating to all and so we present this list of some of the largest, mightiest and most spectacular raptors from around the world. 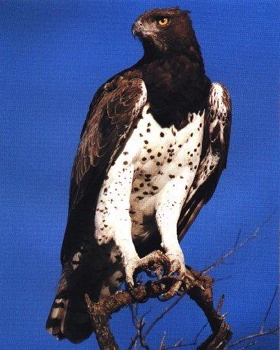 The Martial Eagle is Africa’s largest eagle, having a wingspan of 2.6 meters and weighing up to 6.2 kgs. It is easily recognized by its spotted undersides. A very aggressive predator, the Martial Eagle feeds on whatever it can catch, from Guinea fowl and other birds, to baboons, lion cubs, and even antelopes! Although capable of killing animals much larger than itself, it rarely does so, simply because it can’t carry such prey to a tree, and eating in the ground can be very dangerous if there are other predators around.

Unfortunately, the Martial Eagle attacks lambs and young sheep on occasion, and farmers therefore consider it to be a pest. Many of these eagles are shot or poisoned by farmers, and today this magnificent bird is rarely seen even in places where it used to be plentiful. 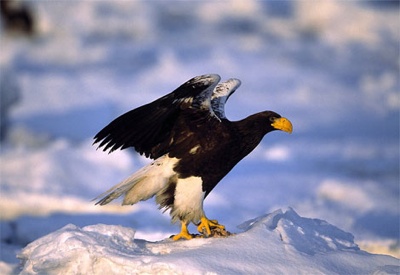 This is a larger and lesser known relative of the famous American Bald Eagle. Found in Russia and Japan, it feeds mostly on fish but sometimes attacks other large birds, such as cranes and swans (which can be very dangerous prey, by the way!), and even juvenile seals. It is also a scavenger, feeding on whatever dead animal it can find. Fortunately, it has never been known to see humans as prey.

It is the heaviest eagle in the world, weighing up to 9 kgs, and having a wingspan of almost 2.5 meters. It also has the largest and most powerful beak of any eagle. Unfortunately, the Steller’s sea eagle is an endangered species and its population has decreased as the result of lead poisoning; the eagles ingest the lead when scavenging on animal remains left by human hunters. Despite their large size and great power, it takes only one ingested lead pellet to kill a Steller’s sea eagle. 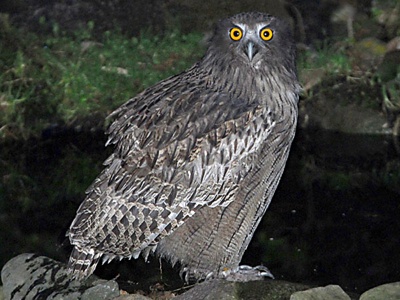 Blakiston’s fish owl is possibly the largest owl in the world. Found in Siberia and Japan, this magnificent bird has a wingspan of 2 meters and weighs up to 4.5 kgs. It feeds (you guessed it) mostly on fish, but it also takes mammals and birds once in a while. These owls were once thought to be gregarious; the truth is that they are usually found alone or in pairs, and they only gather in larger numbers when food is very scarce (during very harsh winters, for example). 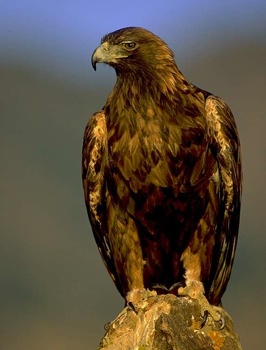 Found in North America, Eurasia and northern Africa, the Golden eagle is one of the most formidable aerial predators in the world; it usually feeds on rabbits, hares and large birds, but it has also been known to take foxes, young sheep and goats, and even adult deer and caribou. In Kazakhstan, where Golden Eagles are known as berkut, they are trained by nomadic hunters to hunt wolves! They also hunt and eat other birds of prey.

Although Golden Eagles are powerful enough to kill a man, they have never been known to attack adult humans as prey. In some parts of Europe and Asia, stories are told about golden eagles snatching children, and of the remains of said children found in the bird’s nest. The Golden Eagle can weigh up to 7 kgs, and has a 2 meter wingspan. Females are larger and more aggressive than males. Fossils found in Europe suggest that they were even larger in prehistoric times, a few thousand years ago. 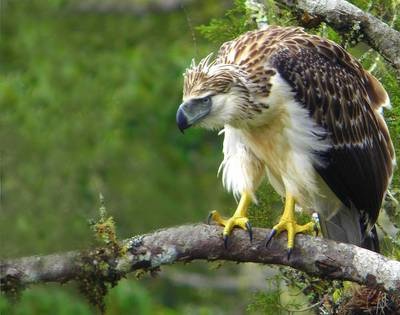 The Philippine eagle is one of the several large eagles adapted to hunt in densely forested habitats. This magnificent species is found exclusively in the Philippines, where it has become a national symbol. It can weigh up to 7 kgs, has a 2 meter wingspan and a spectacular feather “mane”. It feeds mostly on monkeys, flying lemurs (colugos), large bats, and even pigs and dogs. It has never been known to attack humans (although once again, rumors of Philippine eagles snatching children do exist).

The Philippine eagle is a protected species and killing one means twelve years of prison in Philippines. Even so, it is still one of the most endangered birds in the world, with as few as 200-400 eagles living in the wild today. 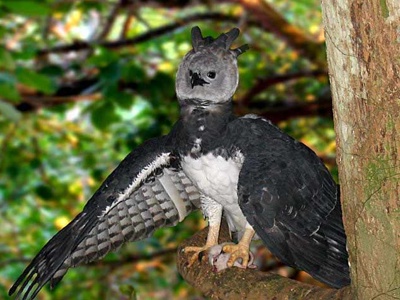 This is often called the most powerful eagle in the world, weighing up to 9 kgs and measuring 105 cms long. Its talons are longer than a bear’s claws, and it has such a powerful grasp, that it could break a man’s arm or even pierce through his skull if it wanted to. Fortunately, Harpy eagles have never been known to attack humans (unless protecting their nest). In some parts of its range (southern Mexico, Central and South America), Harpy eagles have been said to snatch small children, but this has never been confirmed. They feed mostly on monkeys, sloths, and large birds such as macaws. Iguanas and boas are also taken on occasion.

Harpy eagles have a wingspan of around 2 meters, much shorter than would be expected on such a large bird; this is an adaptation to fly in densely forested habitats, where a greater wingspan would mean less maneuverability, and therefore, more accidents. Unfortunately, Harpy eagles are endangered in most of their range, due to habitat destruction; in some places of Mexico, for example, they are so rare that locals regard them as a semi-legendary animal. 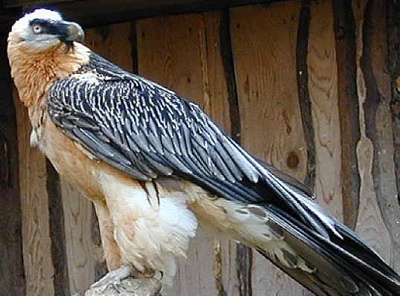 The Bearded Vulture is also known as the lammergeyer, and is one of the largest but least known raptors in the world. It is found in Europe, Asia and Africa. It can weigh up to 8 kgs and has a wingspan of over 3 meters. Bearded vultures are mostly scavengers; they are known to pick up the bones of dead animals and drop them from great heights, repeatedly if necessary, over a hard surface such as a cliff or a large rock. When the bone finally breaks open, the vulture feeds on the highly nutritious marrow. They are also known to kill tortoises and break open their shells by doing the exact same thing. According to a legend, Greek playwright Aeschylus died when a tortoise “fell from the sky” and landed on his head. Some people believe that the “culprit” was a Bearded Vulture that mistook Aeschylus’ bald head for a rock.

Usually, Bearded Vultures disdain rotten flesh, a trait that sets them apart from most other vultures. According to some, these birds attack live prey sometimes, even larger animals such as chamois and wild goats; they are not adapted to kill large prey, so they would knock said animals off cliffs, to cause their death and feed on their carcasses. The same has been said of a number of other mountain dwelling raptors, such as Golden Eagles and Andean Condors. To my knowledge, only the Golden Eagle has been confirmed to use this hunting technique. 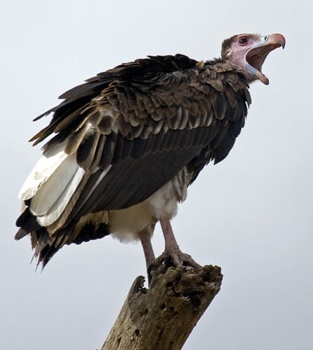 Lappet faced vultures are found in African savannahs and in Arabia. Although seldom mentioned among the largest flying birds, they are actually as large as American condors, with a wingspan of 3 meters and weighing up to 14 kgs. They also have much larger, sharper and more powerful beaks than condors. This is because, unlike condors, which are full-time scavengers, the Lappet-faced vulture is also an opportunistic predator, feeding on any animal it can subdue. It has been known to kill young gazelles and antelopes, and to prey on flamingo colonies.

It also steals the eggs and young of other birds. Due to its size and might, the Lappet-faced vulture is often the first one to eat from a carcass; it is very aggressive and has been known to attack jackals and smaller vultures and keep them away from the carrion until it has finished its meal. Even the cheetah prefers to stay away from this vulture’s dangerous beak! 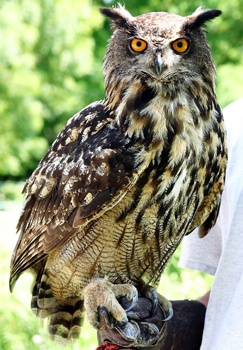 Found in the forests and mountains of Asia and Europe, the Eurasian eagle owl has been called the “nocturnal equivalent to the Golden Eagle”, and with good reason. Weighing up to 4.3 kgs, with a wingspan of 2 meters, these owls are among the largest and most powerful, and although they feed mostly on rodents, rabbits and hares, they have also been known to take foxes, and even roe deer! They are also well known for killing and eating other raptors, both diurnal and nocturnal (and including some kinds of eagle).

In North America (and south to Argentina), the Eurasian Eagle Owl is replaced by the Great Horned Owl. Although this species is smaller than its Eurasian relative, it deserves to be mentioned here because, according to some ornithologists, it is the only owl known to have killed a human being. However, I have read of smaller owls of other species indirectly killing humans while the latter were trying to raid the bird’s nest, or simply, to have a better look at it. The protective parent owls attacked the intruders until they fell from the tree and to their death. 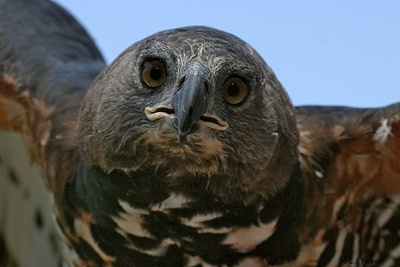 Found in the rainforests of tropical Africa, this eagle measures around 90 cms long and has a 2 meter wingspan. However, it has been known to hunt animals up to 35 kgs! This powerful and aggressive eagle is known by the Africans as “the leopard of the air”. It’s main killing weapon are its deadly talons, which are strong enough to crush the skull of a monkey (its favorite prey) killing it instantly and sometimes causing the eyes to pop out of their sockets! Not even the largest monkey, the mandrill, is safe from the attack of the Crowned Eagle, although usually only juvenile mandrills are taken.

Other usual victims of this bird are hyraxes, Guinea fowl, agwantibos (a nocturnal primate), chevrotains and even small antelopes. In prehistoric times, these eagles preyed on our australopithecine ancestors as well; the marks of the Crowned Eagle talons have been found in the two million year old skulls of juvenile hominines.

Even in modern times, Crowned Eagles still see small humans as potential prey. Skulls of human infants have been found in their nests, and in Zambia, a seven year old was once attacked by a Crowned Eagle in his way to school. He received serious injury to the head, chest and arms as the raptor tried unsuccessfully to carry him away, and was only saved when a woman arrived on time to help him and managed to kill the bird. Later examination of the area found no Crowned Eagle nests, and besides, the eagle turned out to be a juvenile, which means that it wasn’t protecting a nest, and that the attack had been predatory.