Nature is beautiful, but it can also be deadly, and sometimes, just downright nasty. Here’s a list of ten horrible ways in which animals can kill you. There are many more, but I’m sure these would be enough to give anyone nightmares. 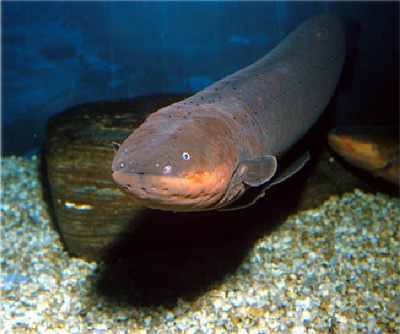 Electric eels are elongated, fresh water fish, native to the Amazon and Orinoco rivers in South America. They are not really eels, but a kind of knifefish (and related to catfish). They are among the deadliest denizens of the South American rivers. It has not one, but three specialized organs to produce electric currents strong enough (600 volts, sometimes more) to stun or kill an adult human. It is believed that many “unexplained” disappearances of people while swimming in the Amazon and Orinoco rivers, could be due to them being stunned by an electric eel and drowning, or even, dying because of the eel’s discharge itself. Many of these deaths are often blamed on attacks by predatory animals such as piranha or caiman.

The electric eel doesn’t eat human beings; it feeds on smaller fish, crabs and small mammals. It only attacks in self defense, and handling an electric eel or even entering the water wherever these fish are common should be avoided at all costs. 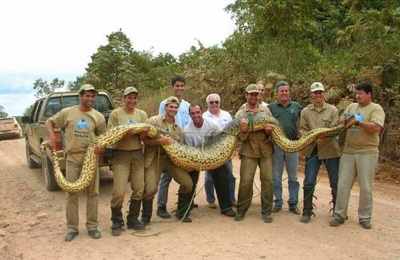 Pythons and boas (anacondas being a kind of boa) are not venomous. They have very sharp teeth to hold on to their prey, but they rely on constriction for the actual kill. This means, they coil around the victim (once they have secured it with their teeth) and squeeze so that the unfortunate animal doesn’t have any space to breathe. Every time the victim tries to inhale, the snake squeezes harder. This deadly “hug” is so powerful that even blood can’t flow. As a matter of fact, death comes usually because of cardiac arrest/stroke, and not asphyxia as was once believed.

Although some smaller snakes (such as king snakes and gopher snakes) use constriction to kill prey, pythons and anacondas are the best known constrictors, and the scariest, too, since these cold-blooded predators have been known to kill and eat humans once in a while. 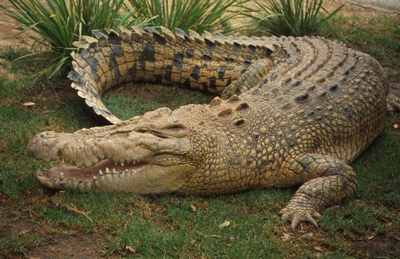 Among large predatory animals, crocodiles are the ones that kill the greatest number of people every year. They are often said to be among the few animals that still see humans as perfectly suitable prey. To deal with large prey, crocodiles use the “death roll”. Called by some “the most powerful killing mechanism” of any animal, it consists of the crocodile holding its prey with its jaws (usually by the neck or a limb), dragging it to the water and spinning its entire body; this is usually enough to dismember the unfortunate victim. They can do this on dry land as well.

The scariest part is that the crocodile really doesn’t care if the prey is alive or dead when it starts feeding; by doing a death-roll, it is really trying to tear the prey into smaller, easier to swallow pieces. Many humans lucky enough to escape a crocodile attack, have lost entire limbs to this devastating feeding method. But most victims die of blood loss, shock or simply drown before they have a chance to escape.

7
Bitten through the Brain
Jaguar 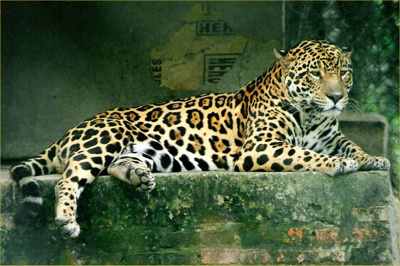 Most big cats kill prey by strangulation. From the house cat to the tiger and lion, they all go for the neck/throat in most cases, biting so hard and holding so tight that the victim either chokes or has a stroke. In some cases, the bite is deep enough to pierce the windpipe, the jugular vein, or even to snap the neck vertebrae. It often takes a few minutes for a big cat to strangle a large prey to death. But the jaguar is a completely different story. This formidable cat, found in Mexico and Central and South America, has been known to strangle some prey once in a while, but it usually goes for a faster, deadlier method; it simply bites through the skull and pierces the brain, causing instant death. It has particularly long and thick fangs, and incredibly powerful jaws to do this (actually, its bite is much stronger than a lion’s or a tiger’s, relative to the cat’s size).

The skull bite allows the jaguar to kill armored prey such as caimans, as well as the, now extinct, glyptodonts (giant relatives to armadillos), and they have also been known to use this killing method successfully against feral bulls weighing almost half a ton. You could ask, if the jaguar kills its prey so quickly and efficiently, why is it in the list? Shouldn’t the other cats be worse, since it takes minutes for them to strangle prey? Maybe, but it seems that for some not so big, or not so armored prey, the jaguar doesn’t bite through the top of the skull, but rather sinks its fangs into the victims ears! Can you imagine the fangs of a giant cat stabbing through your ears and going into your brain? That’s the stuff of nightmares. 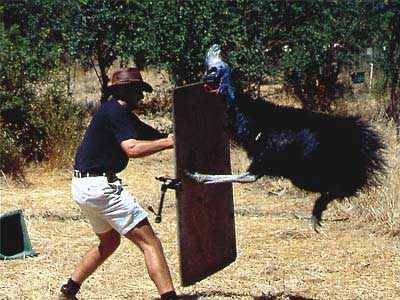 The Cassowary is the only bird that made it to this list. Sure, protective parent owls clawing your eyes out and causing you to fall down a tree to your death (it has happened) are scary, but these birds are usually harmless unless you do something really stupid. While the vegetarian Cassowary (found in the rainforests of Australia and New Guinea) is usually a shy animal, and will try to avoid confrontations, males can be extremely aggressive at times, and zookeepers agree that cassowaries are among the most dangerous creatures to keep in a zoo.

Listed by the Guinness World Records as the world’s most dangerous bird, the Cassowary has an enormous, dagger-like claw on the second toe of each foot. When confronted, it will leap into the air and kick its enemy, kung fu-style, using the deadly claws to cause serious injury. It can, literally, claw your guts out. And even if it doesn’t, the kick is mighty enough to rupture your internal organs and cause massive internal bleeding and death. Needless to say, you should never approach one of these birds, particularly if they are captive or protecting their chicks.

5
Having your Face Ripped off
Sloth Bear 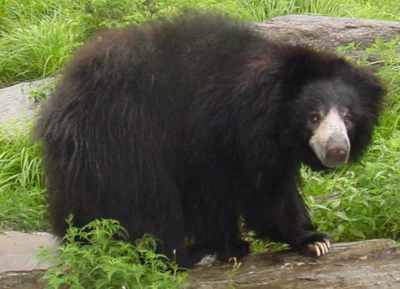 Sloth bears are among the least known bear species. They are found mostly in India and Sri Lanka, where natives fear them even more than tigers or snakes. And with good reason. It has been said that these bears maul at least one person per week in India, and they often seem to attack without provocation. They feed mostly on ants and termites, and only very rarely eat meat, but they seem to dislike humans (which shouldn’t be surprising, since these bears have been subjected to centuries of hunting and cruelty, e.g, dancing bears). They are also short sighted and easily taken by surprise. If confronted, a sloth bear is as likely to attack as it is to run away.

Being mauled by any kind of bear is a horrible way to go, but the Sloth bear is particularly nasty due to its trademark killing method; it uses its teeth and its incredibly long, sharp claws to literally rip the victim’s face off. Those who are lucky enough to escape death after a Sloth bear attack, are usually badly scarred for life, and often left without one of both eyes, nose, lips, etc.

Also known as the driver ant, this African species is the only insect known to actually attack and devour humans, although you have to be very unlucky to die in a Siafu attack. These ants are very slow, and blind; unless you are unable to stay out of their way, you really don’t have to be scared of them. Usually these ants feed on smaller animals, but attacks on sleeping people, babies left unattended, and at least one drunken man who broke a leg and couldn’t run away from the ant army, have all been reported.

Domestic animals such as cows and goats who were left tied to a pole for the night, and thus rendered unable to escape, have also been known to be devoured by Siafu ants. What makes these insects so scary, is that they can bite and sting, but that’s not the way they kill you. During the attack, they will attempt to go into any opening they can find, including your mouth and nose, and victims are said to die of asphyxia after the ants crawl into your lungs! If that’s not scary… 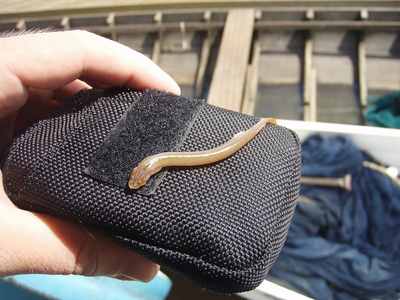 Candiru are rather sinister creatures to start with. These small, slender, almost transparent catfish relatives are among the few hematophagous vertebrates, feeding on the blood of other fish. They do this by going into their gills and anchoring themselves to them with a series of hooked spines they have in their bodies. A severe candiru infestation can weaken and eventually kill the unfortunate victim. They also feed on death fish, eating them from the inside out. Although candiru used to be a little known denizen of the South American rivers, they have lately gained some fame as the most feared fish in the Amazon. That’s right; more so than piranhas and electric eels.

This is because, sometimes, candiru will swim into the urethra or anus of both men and women, and become stuck in there via the hooked spines. This is very painful, and potentially deadly, because when the human victim leaves the water, the fish dies and its body starts to rot. The resulting infection has caused many deaths in remote parts of South America where there aren’t any hospitals, since a delicate surgical procedure is needed to remove the fish from your private parts. Ouch. 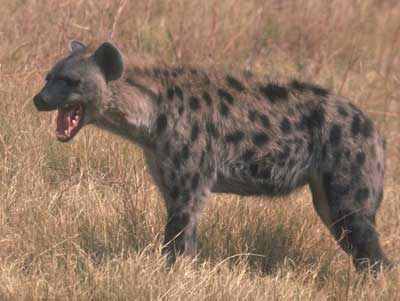 Big cats will usually make sure you’re dead before they start feeding on your flesh. They are perfectly equipped to kill their victim quickly and with no mess. However, some of their distant Carnivorous relatives are a completely different story. Although they kill smaller prey by violently shaking them and breaking their spine, wolves and hyenas lack any efficient killing weapons to deal with larger prey, so they usually don’t waste time and start eating as soon as the victim is brought down.

Indeed, it is not uncommon for a large animal to be still alive when the wolf pack or hyena clan is already munching on its intestines. Of course, death follows soon after, due to shock or blood loss, but still, the idea of being alive while a snarling group of voracious predators feeds on your entrails is particularly disturbing to most people, hence the wolf/hyena’s place as #2 in this list. 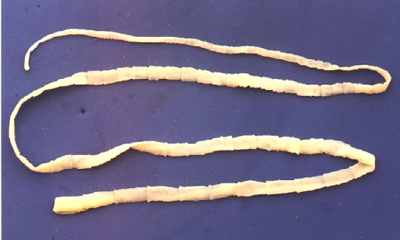 Tapeworms are gigantic (up to 12 meters long or more depending on the species) although very slender parasites, whose eggs or larvae can be ingested via eating raw or badly cooked meat. Once ingested, the creature will anchor itself to the walls of the host’s intestine and absorb all the nutrients from the host’s food; in other words, you eat, your intestine absorbs the nutrients, and the tapeworm steals the nutrients for itself. The result? You can eat incredible amounts of food and you will still be malnourished.

If left untreated, a tapeworm infection can eventually lead to death by starvation, no matter how much you ate. And just in case you thought it couldn’t be worse, sometimes the tapeworm larvae can find their way into your brain, causing seizures, and all sorts of neurological problems. So, having seizures due to a worm infestation in your brain before you starve to death due to the big adult worm in your gut. The tapeworm just had to be #1.