Since the beginning of humanity, people have invented explanations for things they don’t understand. The culprits for the unexplained have evolved from gods and demons, to ghosts and spirits, to extraterrestrials. A recent study showed that almost 1 in 4 Americans believe that, at least some of the reported UFO’s, are actually spacecraft from other worlds. Many people believe space aliens have visited Earth in the past – if they’re not here right now. Of course the vast majority of “evidence” of extraterrestrials have simple (albeit WAY less exciting) explanations. Here are 10 man-made things falsely attributed to extraterrestrial influence. Enjoy. 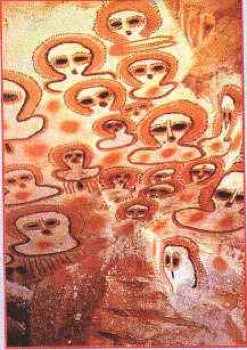 Discoveries of ancient artwork depicting mysterious figures have helped give rise to the “Ancient Astronaut Theory”, which claims that alien beings visited prehistoric humans, possibly interacting and sharing knowledge with them. Advocates of this theory usually point to specific examples, such as a particular rock carving in the Val Camonica site in Italy, as well as the Wandjina Petroglyph (above) sites in Australia. Using these examples as evidence reaches unsturdy ground when held up to scientific scrutiny. The popular image of two “alien” figures in Val Camonica was picked out of over 200,000 drawings – a pretty clear sign of confirmation bias. Testing at the Wandjina site showed some drawings had been repainted numerous times over, with the images evolving over time at the artists’ discretion, rendering the original artwork unknown. 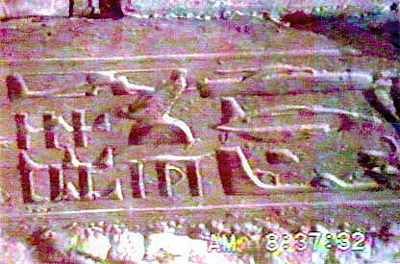 According to many UFO enthusiasts, the Temple of Osiris at Abydos contains definitive proof of advanced ancient technology. The glyphs seem to include depictions of a helicopter, a jet plane and some sort of flying saucer. Unfortunately for believers, the glyphs are a result of erosion and actual replacement and re-carving of hieroglyphics. The original text is part of the titulary of Seti I, that had been changed to reference Ramsses II. Modifying and defacing inscriptions was common in ancient Egypt’s history, and in this case yielded some strange-looking results. Even stranger, UFO enthusiasts do not find it odd that there are no other examples like this in the thousands of hieroglyphs discovered elsewhere, nor is there any mention of flying machines anywhere in Egyptian literature. 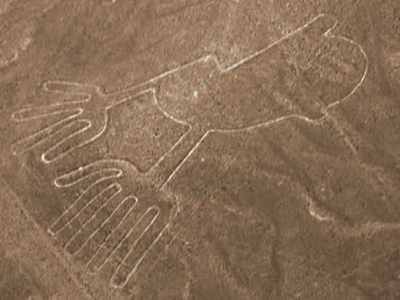 The Nazca Lines are a series of hundreds of ancient geoglyphs located in Peru. These include depictions of animals, birds, fish and humans, along with simple lines and geometric shapes. Some of them are over 600ft. across and can only be viewed properly from the air. This has led to speculation by the Ancient Astronaut crowd that the ancient Peruvians were capable of advanced flight, or were trying to communicate with beings that were. Scientists have claimed the lines were of a spiritual significance, possibly pertaining to the availability of water. Also, historians have since recreated similar lines using primitive techniques without aerial assistance. 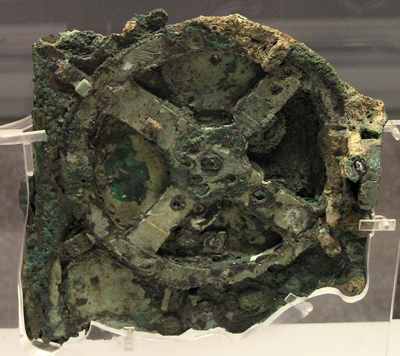 The Mechanism is a clock-like instrument from around 85 BC, that was discovered in 1900 near Antikythera, Greece. It was used aboard ships as a navigation tool because it could accurately predict locations of the sun, moon and the 5 known planets, at any given date. The device contained a complex system of gears, built with sophisticated technology, that rivaled that of 14th century clocks. Because of the precision involved in it’s construction, it’s almost exact predictions of cosmic bodies, and the apparent 1300 year gap in technology, UFO enthusiasts have cited this as evidence of alien contact, as humans could have never figured it’s complex technology out that early. However, if aliens were to blame, they would have probably told the Greeks about more than just five planets, or at least given them a magnetic compass. Of course ancient Greek literature mentions mechanisms like this one without mentioning other-worldly visitors. 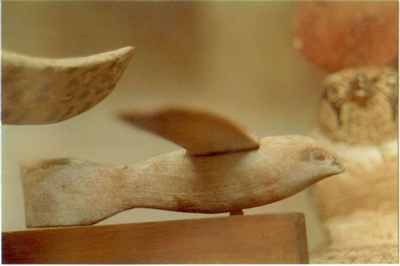 Found in a tomb excavation in 1898, the Saqqara Bird has been rumored, by believers in the Ancient Astronaut Theory, to be evidence of advanced flight in ancient Egypt. They note the vertical tail of the “bird” resembles a tailplane on an aircraft as opposed to the horizontal tail feathers of a real bird. The lack of legs, and the angle of the wings has lent to speculation about the design’s capability of aerodynamic lift. Tests performed on recreations of the artifact have shown it to have no aerodynamic properties conductive to flight. Modern scientific theories suggest it’s either a religious artifact or even just a simple children’s toy. 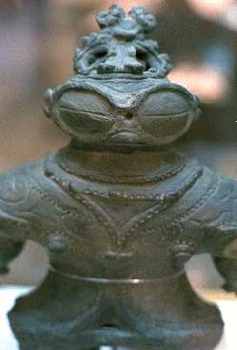 Dogu are small humanoid figurines created in prehistoric Japan. The unusual appearance of the Dogu has been claimed to resemble some sort of space suit, supposedly complete with goggles, armor and hoses. Adding to the mystery, their exact purpose remains unclear to historians. Ancient Astronaut proponents tend to ignore the fact that the “goggle-eyed type” figures are only one of many types of Dogu, and that archaeologists have pointed out the similarity of the figure’s eyes with Inuit snow goggles. They are seldom discovered intact, with limbs having been cut or broken off. This with the exaggerated hips, buttocks, and breasts depicted suggest a possible usage in fertility rituals. 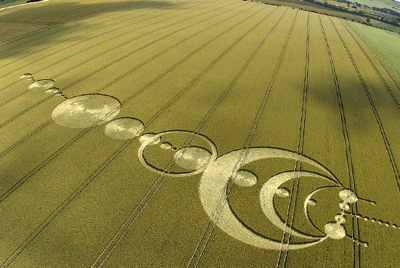 In 1966, a man claimed to have seen a saucer shaped craft over a field near Tully, Australia. The saucer allegedly left a circular pattern of flattened reeds over the area it had taken off from. Years later, this unique story inspired two English pranksters to create their own patterns of flattened crops in local fields, using simple tools. The fad quickly spread, and crop circles became increasingly complex and intricate. While some believe this is a result of alien technology advancing, or the increasingly complex nature of an extraterrestrial “message” to humans, the overwhelming majority of crop circles have been revealed as products of deception, artistic expression and/or business or tourist interests. 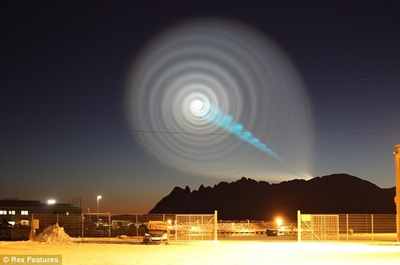 In December of 2009, an enormous spiral appeared in the sky over northern Norway, leading to speculation of an extraterrestrial visit. The unusual visual phenomenon lasted for 2-3 minutes, and consisted of a blue light originating on the horizon, which gained altitude, culminating into a large white pinwheel effect before disappearing “into a wormhole.” UFO enthusiasts cited this as evidence of extraterrestrial intelligence, while the official explanation from the Russian government wasn’t quite as fantastic. Apparently, a Russian military missile test went haywire, and the spiral effect was either a result of a broken stabilizer engine, or the missile circling an airborne misfire beacon until it ran out of fuel and fell into the sea. 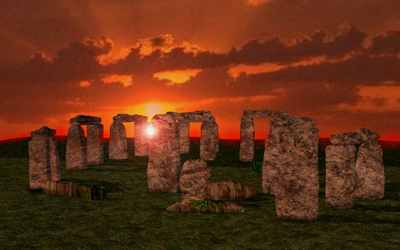 With it’s enormous stones dating past 2400BC, the purpose and construction methods of Stonehenge have long been debated. Humans are generally accepted to have built the actual monument, as comparably large stones have been erected in modern times using primitive tools. However, Ancient Astronaut theorists claim that the positions of the stones confirm an ancient ability to predict eclipses. This ability would mean the ancients had knowledge of lunar nodes – the two points in space where Earth’s orbit intersects the moon’s orbit. This knowledge wouldn’t be possible without extraterrestrial influence — or by generations of astute study that was continuously passed down and improved upon. Modern science obviously leans towards the latter, but it is possible that scientists have also attributed too much astronomical meaning to the placement of the stones. 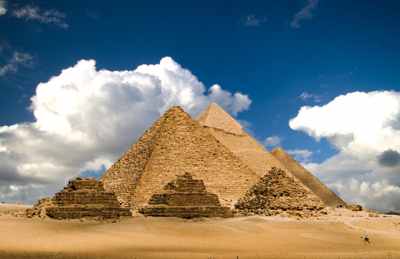 Similar to many other megalithic sites around the world, the Pyramids of Giza have been repeatedly attributed to extraterrestrials throughout the years, mostly because of the sheer magnitude of their construction. According to believers, the technology needed to build the massive monuments was not available to the Egyptians during the time they were built. The cuts and placement of the stones are said to be so precise that we cannot recreate them even in modern times. The placement of the pyramids themselves and the measurements contained within are also said to support the Ancient Astronaut Theory, such as the height of the Great Pyramid being an accurate, scaled-down measurement of the distance between Earth and the Sun, or the three Giza Pyramids correlating with the constellation Orion. Modern measuring techniques have proven hopeful ideas like those to be false, yet the rumors persist. The Pyramids of Giza do display a remarkable knowledge of engineering and measuring for their time period, but one would think that if creatures capable of interstellar travel were actually responsible for them, they would have done a better job. 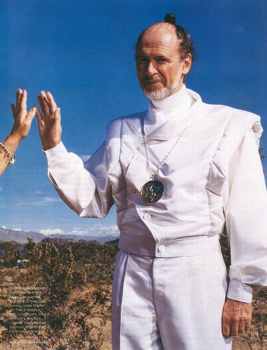 Believers in extraterrestrials have also pointed to religious texts to support their claims of a previous visitation. Proponents often mention the imagery in the Book of Ezekiel, or the vimanas of Hindu Vedic texts, while some religions, like Raelism and Scientology, hold the belief of extraterrestrials as basic tenets of their faith. One thing some Ancient Astronaut theorists like to mention as a modern day comparison are the so-called Cargo Cults. These “cults” arose when the primitive, indigenous populations of isolated islands were exposed to visitors from civilized countries. For example, U.S. soldiers landed on the tiny island of Tanna, Vanuatu, during WWII to build airstrips for their fight against Japan. The tribal inhabitants viewed the soldiers as gods, and accepted gifts from them as rewards from their deities. When the soldiers left as quickly as they came, the inhabitants began recreating their “rituals,” such as marching in formation and building makeshift landing strips and planes, in order to continue the delivery of their divine “cargo.” Some ufologists have speculated that ancient religions may have developed the same way, with extraterrestrials acting the part of American soldiers.

Top 10 International Murder Mysteries From A Century Ago