Carrion is a lovely word used for rotting or decomposing flesh, and so carrion flowers tend to smell like a pile of rotten flesh. This smell is not used to ward off potential predators, but rather to attract insects. The insects are not used or consumed by the flower for nutrients, but rather, like with most flowers, they help to pollinate the flower. These flowers do not attract all insects, like butterflies and bees, but only insects actually attracted to carrion, such as carrion beetles and a variety of flies. These Putrid but fascinating flowers differ from one another in amazing ways, and it is some of those that we can look at today. 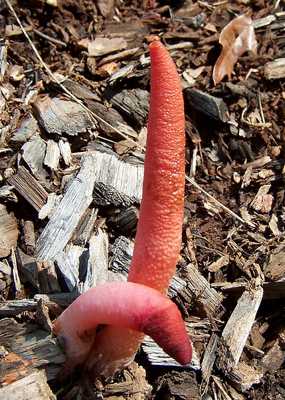 The Phallaceae are a family of fungi, commonly known as stinkhorn mushrooms. Belonging to the fungal order Phallales, the Phallaceae have a worldwide distribution, but are especially prevalent in tropical regions. They are known for their foul smelling, sticky spore masses, or gleba, borne on the end of stalks called the receptaculum. The characteristic fruiting body structure—a single, unbranched receptaculum with an externally attached gleba on the upper part—distinguish the Phallaceae from other families in the Phalalles. The spore mass typically smells of carrion or dung, and attracts flies and other insects to help disperse the spores. 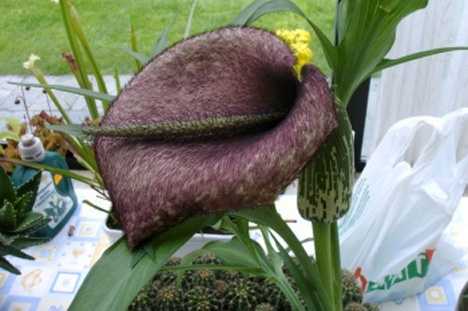 Helicodiceros muscivorus (Dead horse arum lily) is an ornamental plant, native to the northwestern Mediterranean region. It reproduces the stench of rotting meat, attracting carrion-seeking blowflies which act as pollinators. One of a rare group of thermogenic plants, the Dead Horse Arum can raise its temperature by thermogenesis. This helps to lure flies into the plant, and into contact with its pollen. Interestingly, the very few thermogenic plants that do exist are mostly carrion plant (though there are a couple of exceptions). 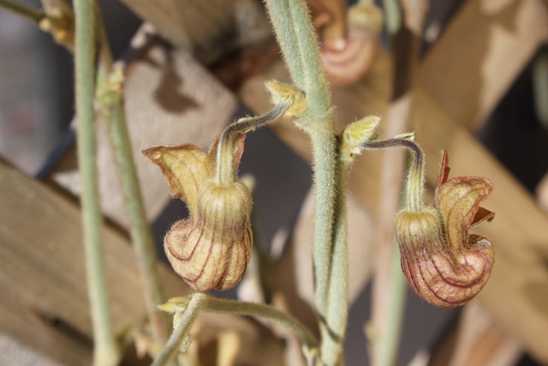 The California Dutchman’s-pipe, or Aristolochia californica, is a deciduous vine with purple-striped, curving, pipe-shaped flowers, which give rise to winged capsular green fruits. The flowers have a strong unpleasant odor which attracts carrion feeding insects. The insects crawl into the convoluted flower and get disoriented, leaving them with more time to pick up pollen as they wander around inside the flower, until their eventual escape. Fungus gnats are the common pollinators that fall for the dutchman’s-pipes’ deceit, as they gain absolutely nothing from the flower. Even though this plant provides nothing to its pollinators, it has been the saving grace of the Pipevine swallowtail butterfly, by being its only food source. The red spotted black caterpillars feed on the leaves, which makes them unpalatable to other predators. They then also use the flowers as a safe enclosed space to under go metamorphosis. 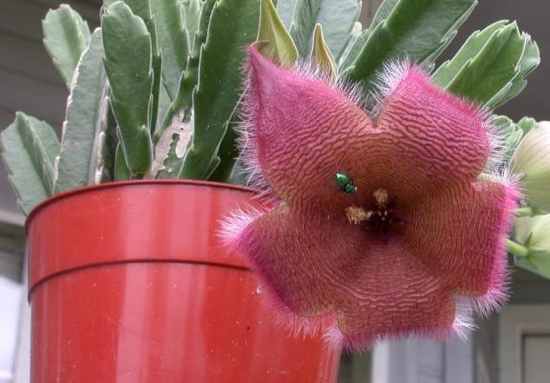 The starfish flowers, or Stapelia Gigantae, is a plant from the milkweed family. It is a cactus like, succulent plant that produces large starfish shaped flowers. The flowers are flesh colored or yellow, with fine red lines running across it, and are covered with hairs. In the center of each flower is a mouth like orifice, in which the plants sex organs lie. A putrid smell is produced here, and it lures insects and flies to the center, where they can aid in pollination. 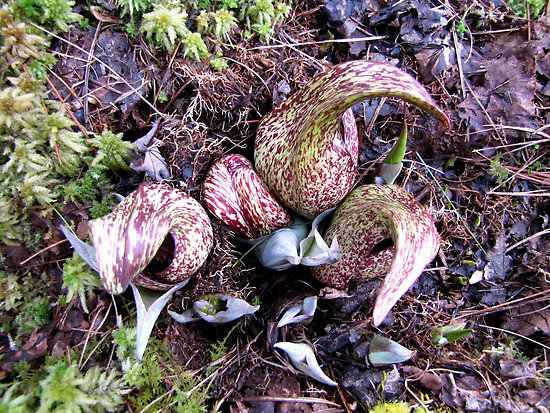 Skunk cabbage, or Symplocarpus foetidus, is a low growing, foul smelling plant that prefers wetlands. It can be found naturally in Northern and Eastern North America, as well as in many parts of Asia. The Skunk cabbage has large broad leaves and produces 10 -15cm flowers with a mottled purple color. This plant does produce a rotting, fetid smell which is most pungent when a leaf is torn. This smell is to attract pollinators such as flies and beetles. Another interesting fact about this plant is that it is one of very few plants that exhibits thermogenesis. This means that it can generate heat, and in this case the temperatures can reach 15-35C. This allows the plant to melt its way through frozen ground, and the flowers can bloom while there is still snow. This also attracts insects that are hiding from the cold, and helps to evaporate and disperse their smell. 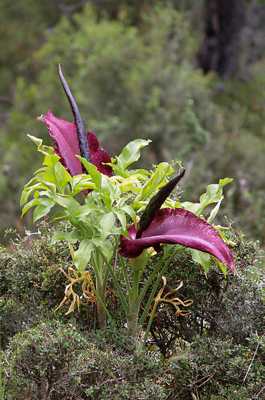 This is truly a flower that goes by many names, some of which include Dragon Arum, Black Arum, Snake Lily, Stink Lily, Black Dragon, Dragonwort and Drakondia. The scientific name is Dracunculus vulgaris, and it is native to the Balkans, Mediterranean, Europe and Anatolia. It has recently been introduced to the United States, where it has thrived. This is an amazing plant that has the most stunning flower, which is made up of a spadix which can grow up to 120cm. The spadix is initially enveloped by the spathe which is a dark purple to black color. The spathe unfolds to reveal the almost black spadix, which releases a strong scent of carrion for about a day, in which time the sexual organs are ripe and insects attracted to the smell will distribute the pollen. 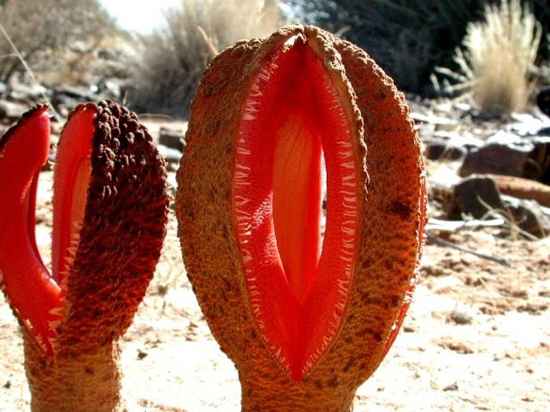 The Hydrona Africana is a root parasite that lives on the Euphorbia Hydnora. The plant is completely leafless and devoid of chlorophyll, as the whole bud is a brown color. The bud looks much like a fungi, and is not really distinguishable as a flower until it opens up to reveal a bright orange, salmon color on the inside. The bud starts to release its putrid carrion smell before it opens and attracts flies and carrion beetles to climb into the bud. They become trapped inside the bud by fine hairs all around each small opening, and they will remain trapped until the bud has fully matured, pollinated and opened up. 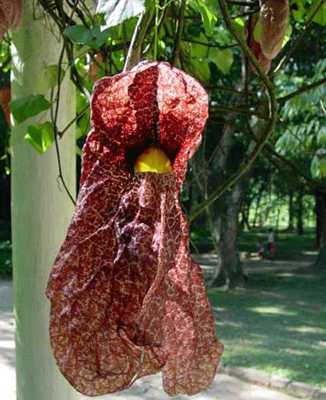 Aristolochia gigantea, also referred to as the Giant Pelican Flower and the Giant Dutchman’s Pipe, originally hails from Brazil and Panama. This vine boasts flowers that are red in color with intricate white markings on the single petal. Resembling a heart that has been rolled into a cone shape, this intriguing plant also has heart shaped foliage that is bright, lush green and quite glossy at times. A sizable plant, the aristolochia gigantea can grow 8 -10 feet in height, with a spread of up to 8 feet, as well. Its blossoms may even grow to be approximately 1 full foot in length. The flowers release a very strong putrid smell for when they open, and this attracts flies to help aid in the pollination process. 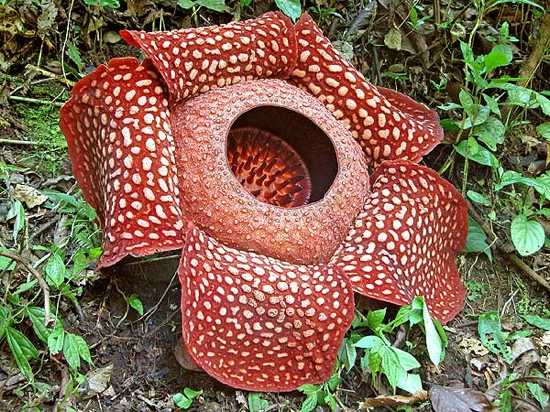 Amazingly both of our final two plants are commonly known as corpse flowers. The Rafflesia arnoldii is the largest individual flower in the world, and is an endemic plant that occurs only in the rainforest of Bengkulu, Sumatra Island, Indonesia and Malaysia. There are several kinds of Rafflesia in these areas, but the arnoldii is the largest at up to 1 meter/3 feet in diameter it can weigh up to 11 kg.

It lives as a parasite on the Tetrastigma vine, which grows only in primary (undisturbed) rainforests. Rafflesia lacks any observable leaves, stems or even roots, yet is still considered a vascular plant. Similar to fungi, individuals grow as thread-like strands of tissue completely embedded within, and in intimate contact with, surrounding host cells from which nutrients and water are obtained. This plant produces no leaves, stems or roots and does not have chlorophyll. It can only be seen when it is ready to reproduce. Perhaps the only part of Rafflesia that is identifiable as distinctly plant-like are the flowers; although, even these are unusual since they attain massive proportions, have a reddish-brown coloration and stink of rotting flesh, which is why it was nicknamed the “corpse flower”. This scent attracts insects such as flies, which then pollinate the rare plant. This plant should not be confused with Amorphophallus titanum (item 1). 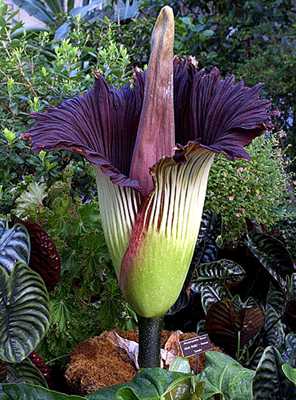 Amorphophallus titanum directly translated from Greek literally means misshapen Penis Giant, from the enormous misshapen phallus that sits directly in the center of the flower, and is commonly known as the Titan Arum. This is a flowering plant with the largest unbranched inflorescence in the world, and it is endemic to Sumatra. The titan arum’s inflorescence can reach over 3 meters (10 ft) in height. Like the related cuckoo pint and calla lily, it consists of a fragrant spadix of flowers wrapped by a spathe, which looks like the flower’s single petal. In the case of the Titan Arum, the spathe is green on the outside and dark burgundy red on the inside, and deeply furrowed. The spadix is hollow and resembles a large loaf of French bread. The upper, visible portion of the spadix is covered in pollen, while its lower extremity is spangled with bright red-orange carpels. The “fragrance” of the inflorescence resembles rotting meat, attracting carrion-eating beetles and Flesh Flies (family Sarcophagidae) that pollinate it. The flower’s deep red color and texture contribute to the illusion that the spathe is a piece of meat. During bloom, the tip of the spadix is approximately human body temperature, which helps the perfume volatilize; this heat is also believed to assist in the illusion that attracts carcass-eating insects.