Greek mythology was always my favorite thing to learn about in grade school and throughout this year. So many affairs and murders – it’s like a big historical soap opera. Though many stories vary, and there is some dispute over certain stories and situations, I tried to stick to one source in order to avoid confusion. Warning: There are a few somewhat NSFW pictures here, naked goddesses and such. But it’s art, so it’s all okay. 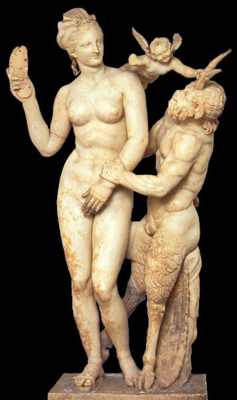 Aphrodite has always been synonymous with sexual pleasure. From her name we get the word aphrodisiac, which might tell you something about her. She was somewhat… promiscuous. She was often considered the goddess of love, but of course, she was more famous for the physical aspects of love. It’s surprising (to me, at least) that she wasn’t higher up on this list. Although she married Hephaestus, according to my source, she only had five children: all with Hermes. Hermes also had another son, Pan, (from which we get the pan flute and the word panic) – pictured above with Aphrodite. 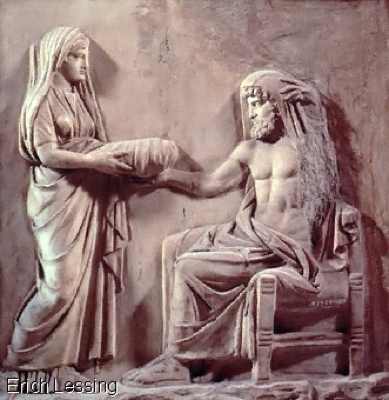 Cronus, the titan, who is often picture as our modern-day father time, fathered six children with his sister, Rhea. Above, she is pictured handing one of their children to Cronus, whom he will promptly swallow. (Cronus’ father, Uranus, cursed him to meet the same fate as he: murdered by his own son.) Eventually, Rhea gets tired of her children being eaten, and she sends her youngest son, Zeus, off to live as a mortal. Eventually, she finds him later and tells him to poison his own father. Cronus eventually spits up all five children he has swallowed, and then was thrown into Tartarus by his sons. 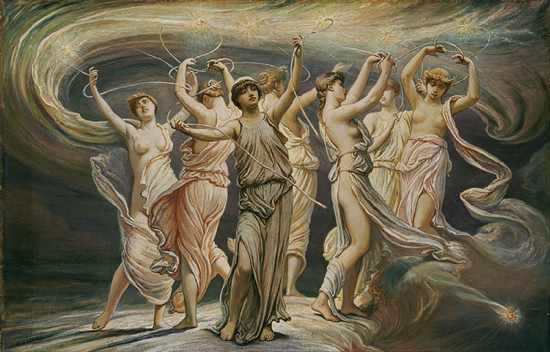 Pleione bore Atlas seven children – sisters called the Pleiades, above. Apparently, they were all “wooed” by other gods, (Merope bearing Pan to Hermes). The Pleiades star cluster was clearly named after these sisters, who are also (half?) sisters to Calypso, my personal favorite character from The Odyssey. Eventually, they learn of their father’s fate, to hold the world on his shoulders, and they commit suicide. 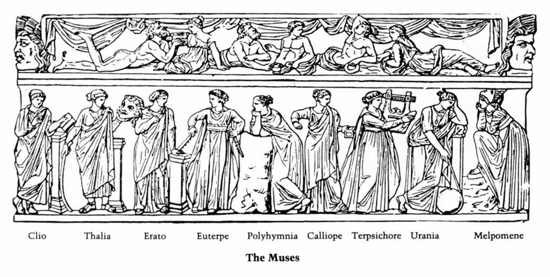 Mnemosyne, one of the titans, was recognized as the goddess of memory. She and Zeus had a small affair and gave birth to the nine Muses, pictured above. The Muses were the deities of art, or rather, those who inspired art – music, poetry, stage, and dance, in particular.

Uranus, one of the original deities, was born to Gaia, who is the inspiration for modern-day Mother Earth. With his mother, he made twelve children. These were all the titans. At first, they gave birth to a horrid beast with fifty heads and a hundred hands. Its name was Hecatonchires. They were so repulsed by this monster that they threw him into Tartarus. After that, they tried again, but were gifted with the horrible Cyclopes. Again, they threw him into Tartarus. On the third try, they succeeded. And soon enough, they had twelve children. Eventually, Cronus kills his father Uranus, as shown in the above picture, and curses his son to have the same fate as he. 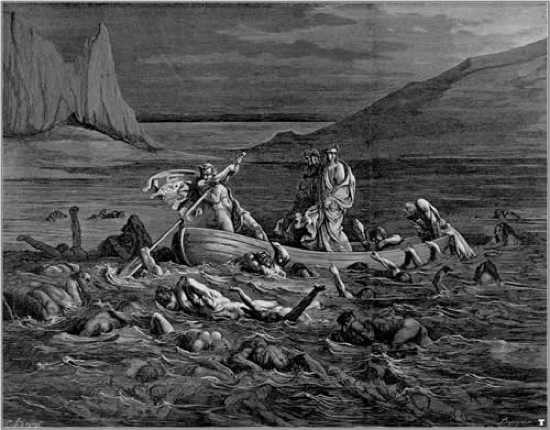 I could not find a good picture of Erebus anywhere, but I’ll have to just put this one up anyway. Erebus was the personification of darkness, and son to Chaos. He and his sister, Nyx, courted to give birth to fourteen children in all. I can’t find much on all of their children, but among the most well known are Hypnos, god of sleep, and Eris, the goddess of discord. 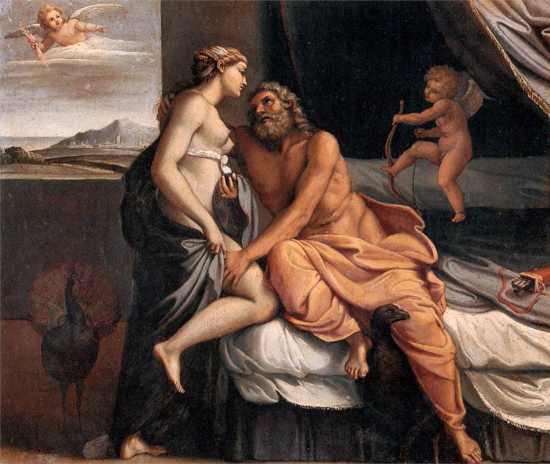 This might come as a surprise, but Zeus is not number one on the list. He gave birth to at least twenty-one children to nine different goddesses (and one who emerged from his head). Among those were his sister/wife, Hera (pictured above), his other sister, Demeter, and his aunt, Mnemosyne. He was definitely the most adulterous god, though. He gave birth to the nine Muses and many other gods of Olympus. While he did get around, he came nowhere close to beating our number one contender… 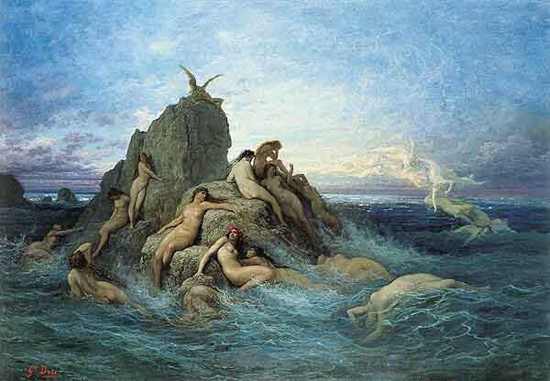 Oceanus and Tethys, who seem to be one of the few monogamous couples on this family tree, purportedly gave birth to about three thousand daughters, known as the Oceanids. Each Oceanid was assigned a particular body of water, pasture, or cloud. Of these, only about a hundred are named from what I can find. Obviously, I do not have the time, space, nor the attention span to list them all, so I will just leave your imaginations to run rampant on this one.