WARNING: DISTURBING. I recently bought an amazing book about one of my favourite places on earth (though I have yet to visit there): The Mütter Museum. It is a museum filled with medical anomalies and photographs of such. In this book are some incredible (but disturbing) images from the museum. I have selected 10 of the most interesting to share you with you today. If you like this list be sure to consider buying the book – it has over 200 incredible images just like this. Click the images to view larger. 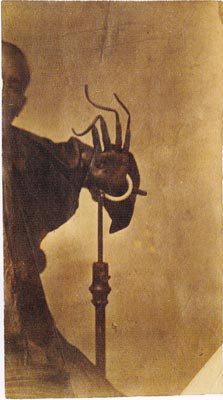 As a symbol of high social standing, high members of the Chinese aristocracy would often grow their fingernails to an excessive length. This was perhaps (like foot binding) a sign that they need not have functional use of their hands for work.

See even more of the macabre exhibits of the Mutter Museum—some of which have never been unveiled to the public. Buy Mutter Museum Historic Medical Photographs at Amazon.com! 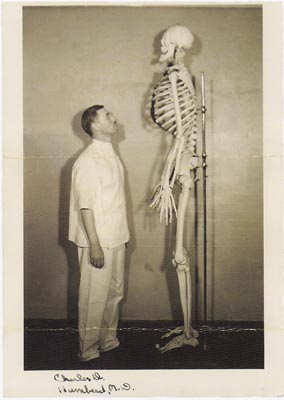 The thirty-two year old man pictured here had his legs and one arms crushed by a railroad car which was transporting building materials. He had to have all three limbs amputated. His was the second successful triple amputation in the United States. 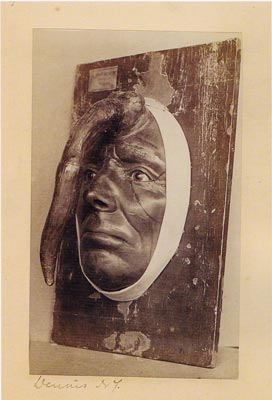 This is a wax model of Madame Dimanche (Widow Sunday) who had a 9.8 inch horn on her head. It took six years to grow to that length. It was removed successfully by a famed French surgeon. 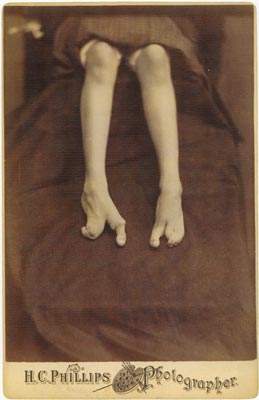 The deformed feet above are the result of a birth defect. These can occur not just in the feet but on the hands also. These deformities were often attributed to “germ or sperm”. 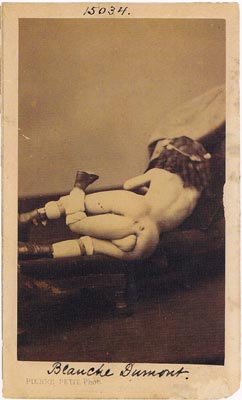 Long time readers will have heard of Blanche Dumas – she is featured on the list of Bizarre Relationships for having sex with a man with three legs and two penises – Juan Baptista Dos Santos; rather convenient for her as she had three legs and two vaginas (and four breasts too). This is the first time we have featured a photograph of Blanche taken from the rear.

What stories do the dead tell? Author Kathleen Sands imagines the lives that came before in her creepy fictional work Boy of Bone: Twelve Stories Inspired by the Mutter Museum at Amazon.com! 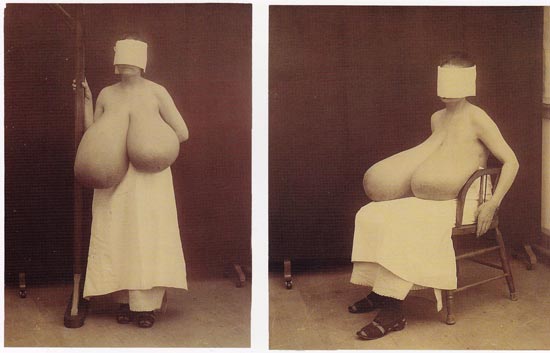 This rather unfortunate woman suffered from bilateral hypertrophy of both breasts. Amazingly she survived an operation to remove them both. After removal the left breast weighed seventeen pounds and the right weighed forty-three pounds. 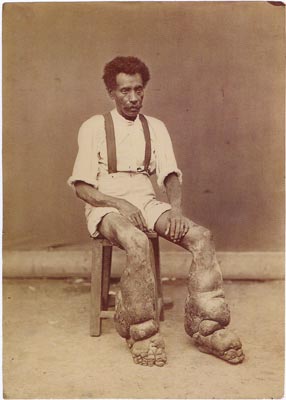 The man above – suffering from elephantiasis – was so distressed by his condition that he begged for amputation. Instead an experimental surgery was performed on him which successfully removed much of the excess tissue. Unfortunately, however, he died five months later. 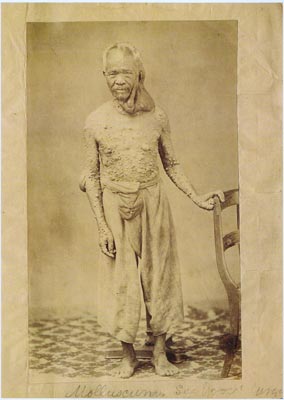 This man suffered from Von Recklinhausen’s Disease (also known as neurofibromatosis). It is a genetic disorder in which your nerves grow tumours. If one of parent’s suffers from this illness you have a 50% chance of inheriting it. 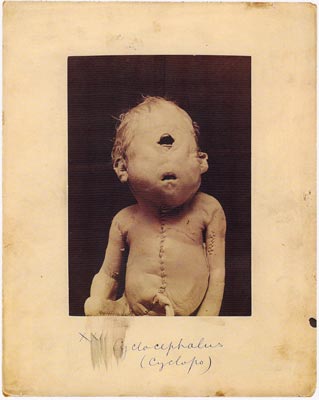 Cyclopia is a rare birth defect in which the body is unable to properly separate the two eye sockets so they remain merged as one. The majority of babies suffering this disease are stillborn but if they survive it is not usually for more than a few hours.